elcome back to Perilous Research, DailyMTG's exclusive Magic Online column. Last week, the Standard Pro Tour Qualifier season came to an end. On Magic Online, this heralded a huge boost in popularity for the game's other major formats, especially Modern. The Magic World Championship showcased Modern and offered up a taste of the format's mainstream. The decks, while powerful, weren't as wacky or innovative as most people expected. After all, Shouta Yasooka's innovative Eternal Command deck from last year completely dominated the tournament. It seems that the masses on Magic Online have taken it upon themselves to be the innovators. The format has undergone some major changes and a swath of innovative archetypes have been birthed in just the last two weeks. 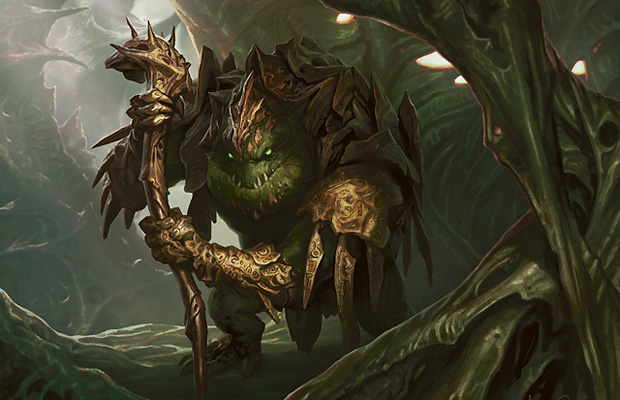 Today, we'll be taking a look at the current state of Modern. The very popular Red-White-Blue decks we saw at the World Championship have faded to obscurity in the blink of an eye as Geist of Saint Traft; Thrun, the Last Troll; and Voice of Resurgence have made major waves in the last few days. We'll take a look at the known entities of the format and discuss their reactions to the format's recent changes, and we'll look at new archetypes and discuss their capabilities and potential longevity. Let's jump right into things with some decklists:

Birthing Pod strategies have been a major part of the Modern metagame since Sam Pardee used the strategy to secure himself a Grand Prix victory earlier this year. The deck uses Melira, Sylvok Outcast alongside creatures with persist like Murderous Redcap and Kitchen Finks. With Melira, Sylvok Outcast in play, the persist creatures return to the battlefield from the graveyard without -1/-1 counters. This lets the deck repeatedly sacrifice one of the persist creatures to achieve infinite "enter the battlefield" triggers; thus netting infinity×2 life with Kitchen Finks or dealing infinity×2 damage with Murderous Redcap. Melira, Sylvok Outcast serves double duty against the Infect decks that you might occasionally see on Magic Online. Most of the cards in the deck are very powerful on their own. The deck plays like a midrange creature deck, but it has the ability to punish an opponent for tapping too much mana, by going infinite. Voice of Resurgence lets this deck play a strong game against the tempo-based blue decks that have been doing well recently. Cartel Aristocrat augments Viscera Seer by providing the deck with a sacrifice outlet at a different mana cost that has the ability to passively protect itself from all matters of trickery.

The Splinter Twin combo deck is fast and resilient. The deck uses Deceiver Exarch or Pestermite in conjunction with Splinter Twin or Kiki-Jiki, Mirror Breaker to copy the creature; each copy of the creature will untap the creature enchanted with Splinter Twin or the Kiki-Jiki, Mirror Breaker. This process allows the deck to create infinite tokens and attack for lethal damage as early as the fourth turn. The deck uses cards like Lightning Bolt, Flame Slash, Remand, and Snapcaster Mage to buy time for its combo. Against control decks, the deck can sideboard out its removal in favor of more interactive spells. Dispel, Spellskite, Mizzium Skin, Izzet Charm, and Counterflux work to protect the combo.

2 Ajani Vengeant 4 Liliana of the Veil

The "Classic" Jund decks are still a force to be reckoned with in Modern. The deck's mean card power level is so high that it doesn't have any truly bad matchups. Bloodbraid Elf has been replaced with Ajani Vengeant, Batterskull, and Thundermaw Hellkite. The deck uses its disruption to set the pace of the game; managing the opponent's resources with Liliana of the Veil, removal, and discard allows the deck to eventually take over with the most efficiently costed/card-advantageous threats available in the format.

The less-popular version of Birthing Pod is still one of the best decks in Modern. The deck often uses the Kiki-Jiki, Mirror Breaker/Deceiver Exarch combo as its finishing blow, but, like the other Birthing Pod strategies, it plays a very powerful game up to that point. Main-deck Glen Elendra Archmage is tutorable with Birthing Pod; it can be sacrificed to search up Kiki-Jiki, Mirror Breaker; and it protects the combo all by itself. Birthing Pod also dramatically increases the value of each sideboard slot, allowing the deck to tutor for specific cards in the matchups where they have the ability to take over or reestablish footing in a game.

This is one of the more interesting decks I've seen in a while. The deck protects itself from direct damage with Leyline of Sanctity and uses Avatar of Hope and Death's Shadow with Plunge into Darkness to create very difficult, if not impossible, board states for the opponent. Rite of Consumption can be used with Death's Shadow to finish off opponents out of nowhere and the deck passively protects itself from disruption with the Leyline of Sanctity. The deck has a lot of ways to prevent its own death and, while its consistency looks like it might be questionable at times, it's certainly not a deck I would like to be paired against if I didn't have a control deck. Angel's Grace is surprisingly strong on its own against aggro and combo decks.

The Hexproof deck used by Reid Duke at the World Championship two weeks ago has been the boogeyman of Modern for a few months. The deck is blazingly fast with its Ethereal Armor draws and tremendously difficult to race with Daybreak Coronet. Unflinching Courage is the latest addition here, providing a much welcomed Armadillo Cloak effect to the mix. The deck is weak to things like Liliana of the Veil and Hallowed Burial, but it's difficult to manufacture a strategy that doesn't lose to this deck's best draws. We can expect this deck to continue showing up in Modern events for the foreseeable future, but I expect at least a few Back to Natures in people's sideboards if it becomes an epidemic.

4 Fury of the Horde

One of the coolest, and certainly the fastest, combo strategies in Modern is the Griselbrand/Goryo's Vengeance combo deck. The deck uses Goryo's Vengeance or Through the Breach to cheat Emrakul, the Aeons Torn or Griselbrand into play. If it's an Emrakul, the Aeons Torn, then it simply attacks, annihilates, and moves on most of the time. However, when it makes a hasty Griselbrand it can attack, then pay 7 life until it finds Fury of the Horde, then attack again, then pay 7 more life, then attack again, and that's all it takes to win the game. The deck achieves third-turn kills reasonably often, but it more consistently operates as a turn-four combo strategy.

Pyromancer Ascension strategies will always be near and dear to my heart. The deck is tremendously powerful and it has the ability to win as early as the third turn. The deck uses Pyromancer Ascension in conjunction with a lot of cards that draw a card and produce some other effect to quickly generate counters and begin doubling spells. Manamorphose draws multiple cards and works as a ritual effect when there are two counters on a Pyromancer Ascension. Once the deck has an active Pyromancer Ascension it's able to sift through the entirety of the deck and used a massive Grapeshot or Empty the Warrens to close the deal.

Scapeshift is the most powerful one-card combo in Modern. Casting Scapeshift with seven lands in play allows a player to deal 18 points of damage divided how he or she chooses in increments of 3. With all the fetch lands and shocklands in Modern, 18 is usually good enough. Once the deck gets to eight lands it can fire off a massive 36-point blast. The deck uses cards like Primeval Titan, Farseek, and Search for Tomorrow to accelerate its mana and to passively win the game by playing lands alongside Valakut, the Molten Pinnacle. Remand and Izzet Charm protect the combo and buy time. Prismatic Omen makes the deck worlds faster by turning a six-land Scapeshift into 72 points of damage.

3 Huntmaster of the Fells 3 Electrolyze

The best deck from the 2012 World Championship is back with a vengeance this week. Deranja managed to 4–0 two back-to-back Modern dailies with this deck. (See Modern Daily #5798492 also.) The deck plays a tempo/control strategy for the early turns of the game and eventually takes the game over by using Cryptic Command with Eternal Witness and Æther Vial. The pilot casts Cryptic Command, using an intended mode, and returning Eternal Witness back to hand, then the player uses Æther Vial to put the Eternal Witness back into play, returning the Cryptic Command back to hand. This is an obviously powerful endgame that's coupled with a very strong early game.

The most exciting new strategy this week is a Domain Tempo deck. The deck is very good at casting Geist of Saint Traft on the second turn. The deck has a tremendous removal suite to back up the Geist of Saint Traft and uses Elspeth, Knight-Errant and Might of Alara to further guarantee that Geist of Saint Traft can charge into the red zone. Tribal Flames does a whole lot of damage when you're casting it for the full 5. Tribal Flames in conjunction with Snapcaster Mage is actually just absurd and its ability to close games out of nowhere is unbelievable. Lingering Souls proves itself to be one of the most powerful cards in the game by making an appearance as a four-of in this aggressive brew. This deck is very impressive and it could be easily adapted to include better disruption like Thoughtseize in the sideboard.