ast week I made a prediction that Faeries would take at least seven of the first twenty Pro Tour Qualifier victories this season. At the time the only PTQ I knew of was the Faeries win we talked about in Anybody Who's Anybody. But there was actually a PTQ at the Pro Tour before that. And now? We have lots more results from last week. 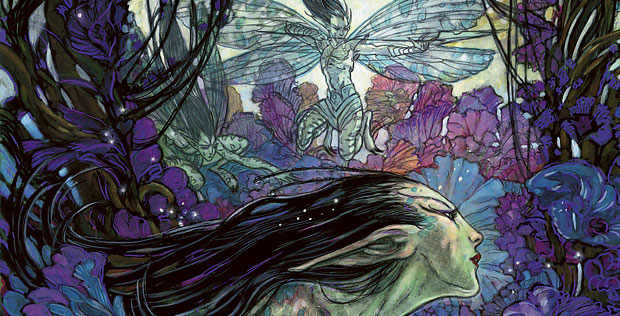 So, what are some of the other decks that have won Nagoya's coveted Blue Envelopes?

A lot of the good players are talking about Grand Prix–Atlanta as the unofficial beginning of the Extended season. The theory behind that theory is that come the Grand Prix Top 8 there won't be a lot of free rides left. The metagame—or at least the beginnings of a legitimate metagame—will be set.

Well from the "preseason" (and it's not really a preseason seeing as the Envelopes are just as Blue), there does at least seem to be a frontrunner in Faeries.

But even before this preseason (which is not really a preseason), we had a non-Faeries win in that first twenty:

Doran was a powerhouse deck at the most recent Extended Pro Tour, putting joined at the hip superstars Brian Kibler and Brad Nelson into that star-studded Top 8. The present Doran has lost Future Sight, meaning it has lost the two-drop of two-drops Tarmogoyf ... but a win by Takebayashi suggests the archetype still has gas left in the tank.

Doran decks take their name from legendary offensive monster Doran, the Siege Tower. This deck can open on Noble Hierarch to play Doran on the second turn. With Doran out, even Noble Hierarch can attack productively (with or without the benefit of exalted). Doran itself is of course a de facto 5/5 creature for a mere three mana.

The curve can flow from Doran to Elspeth, Knight-Errant on the third turn ... Ka-pow! Doran will be attacking for a whopping 9 damage in the air (5 power plus 1 exalted plus Elspeth's Angelic Blessing-like ability). You don't want to be on the receiving end of a punch like that, particularly going second.

Now the Doran deck as played by Takebayashi is substantially different from the Amsterdam Top 8 deck. No Treefolk Harbinger combo; a much different array of threats and answers. This deck is capable of a third turn Baneslayer Angel (second turn Devoted Druid, third turn tap-tap with a -1/-1 counter); and can Fireball-finish via Profane Command.

Despite winning at a point that was prior to Fae's emergence as the early frontrunner—and in a Top 8 with no Faeries competitors—Takebayashi's Doran deck actually seems chock full of cards that can give the little blue and black villains headaches ... 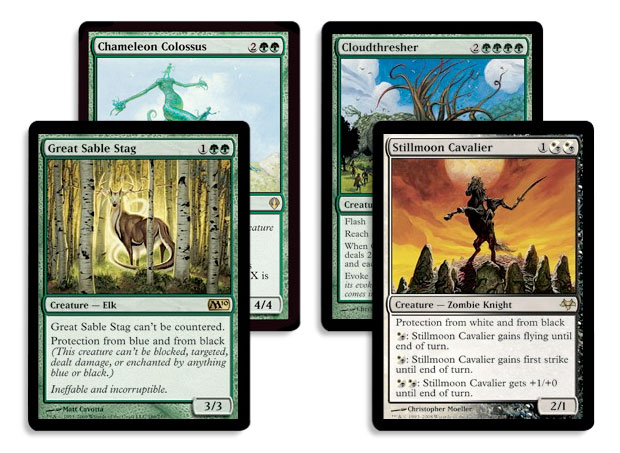 Great Sable Stag is impossible to counter or block; Chameleon Colossus and Stillmoon Cavalier are difficult and unprofitable to block. Even Thoughtseize can prove highly relevant, taking out key cards just prior to curve appearances.

All in all, you could do worse.

So it looks like Green-White Hideaway is going to be a real contender.

How does Green-White Hideaway work?

This deck is the evolution of Zvi Mowshowitz's Mythic engine, applied to Extended. The Mythic engine is all about having a bazillion mana and doing something monolithic with it. The deck obviously has a ton of mana—this deck has nineteen mana creatures! 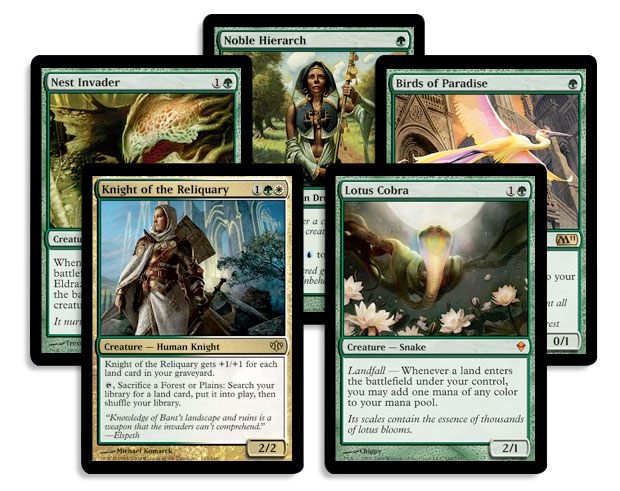 Nest Invader is kind of like Lotus Cobra junior with some additional upside alongside Windbrisk Heights.

The signature of the Mythic engine is the synergy between Knight of the Reliquary and Lotus Cobra. Both cards are absurdly powerful, but together they can power out truly absurd cards. How about just hard-casing Iona, Shield of Emeria? No problem. 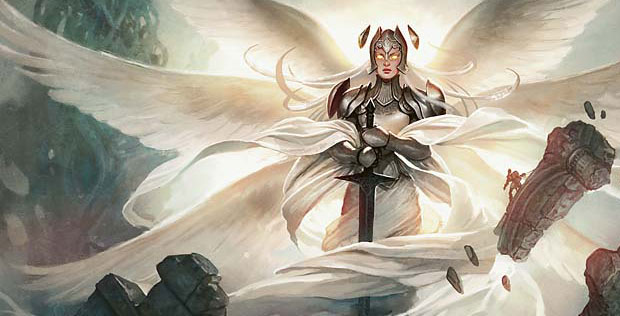 They worked well together in Standard, first in the original Mythic deck, then in the Mythic Conscription deck that performed so well over the summer. In Extended, Knight of the Reliquary doesn't just get fetch lands and man-lands ... It can also find hideaway lands.

The hideaway lands are very easy to activate in this deck. I mean just on a regular draw you can play first-turn Noble Hierarch off a Razorverge Thicket; second-turn Nest Invader and a Windbrisk Heights; then go for the jackpot on the third turn. What did you turn over? Emrakul, the Aeons Torn? Or was it "merely" a Primeval Titan?

Mosswort Bridge is also very easy to activate in this deck. Almost all the cards in this deck are creatures, many of them huge; I mean a Primeval Titan has 6 power, and a Knight of the Reliquary gets bigger and bigger as you use it.

Factor in the speed and appropriateness of Summoning Trap (especially given a metagame where the dominant deck is a blue tempo deck with lots of countermagic). You have lots of ways to cheat out power cards well ahead of curve.

Moreover, there are decks that just can't ever beat Green-White Hideaway. Decks that don't do anything in the first few turns; decks with no disruption or countermagic. These have very little chance of competing. Plus, the deck is just very good at overwhelming other (fair-er) creature decks ... which includes most other creature decks in the format.

If your first impression was "Isn't that just a Standard deck from last summer?" then the answer is a resounding ... Yes.

Well, yes with an asterisk next to the "yes" but, yes, the spiritual core of this deck is very close to that of the deck that was pretty popular last summer. The main differences would be Copperline Gorge and Razorverge Thicket improving the mana base, plus a little bit of Lorwyn block in the sideboard, viz. Spitebellows as a singleton silver bullet to find with Fauna Shaman. 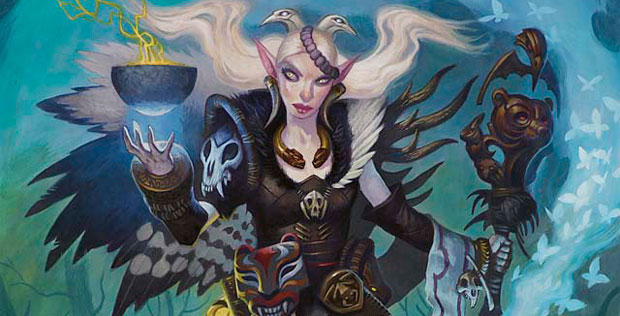 So, how does (faux-Standard deck) Naya Vengevine work?

This deck relies heavily on the strength of creatures; you don't have to look very hard to see how good the creatures in this deck are, from Noble Hierarch on one to Bloodbraid Elf and Vengevine on four.

That said, while the deck really is "just" a stack of good creatures, there are many internal synergies and two-card combinations that Voltron together for value far beyond their printed powers and toughnesses. To wit:

Fauna Shaman ... and anything. The deck is almost all creatures, so a second turn Fauna Shaman should always have ample ammunition to find the exact right card for the situation, even when the deck is under pressure. Fauna Shaman's main job is to set up lots of Vengevines, but it is also perfectly good at setting up any of the other creature combinations.

Bloodbraid Elf ... and the deck. Bloodbraid Elf has all of one non-creature card that it can potentially flip over. That means that unless you reveal the one Basilisk Collar, you are always in position to re-buy Vengevine. What would be far preferable, generally equally mathematically likely, and much more card-advantageous would be to cascade into Stoneforge Mystic instead ... which, incidentally, re-buys Vengevines.

Why play Basilisk Collarat all? Look no further than:

Now just think about everybody less big than a 15/15!

Sun Titan + Tectonic Edge. This build only has the one Titan; and we know from decks like Green-White Hideaway how good, say, a Primeval Titan can be in a somewhat straightforward creature deck.

But Naya Vengevine has consistently opted for Sun Titan.

One reason is that most of the creatures will be eligible for Sun Titan re-buy; but another is that if you draw into the Tectonic Edge, you can basically buy into a mana control combination. Sun Titan + Tectonic Edge—turn after turn—is particularly attractive in match-ups where Naya creature decks are often found wanting, such as against dedicated control with both countermagic and creature removal. Without an opportune top-deck, few of those will be able to keep up with the attrition fight being picked here.

Linvala, Keeper of Silence is something special. Very few cards in the history of Magic will turn off mana abilities, but Linvala neuters Birds of Paradise and Noble Hierarch as efficiently as Fauna Shaman and Knight of the Reliquary. As such, it is a huge weapon against rival creature decks—Green-White Hideaway or Mythic Conscription would both be very vulnerable ... and think about Linvala in the mirror!

Main deck, the deck has almost no way to stop a Linvala once on the battlefield. When your go-to removal is Cunning Sparkmage ... You really want to be able to tap.

Options: Back in Standard times players chose Inferno Titan as a sideboard card. Along with Basilisk Collar, Inferno Titan gives you a way to fight Linvala that doesn't require the tap symbol. Having lots of Linvalas can be important because Linvala is herself a fine answer to an opposing Linvala ... And you will often be in a spot where Fauna Shaman can't help you obtain yours.

And now for something completely different ... Tattermunge Maniac! 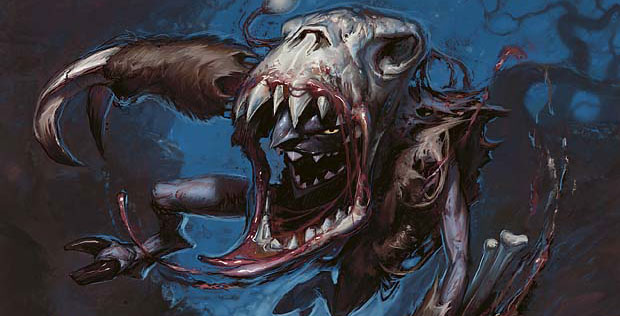 Greg Hatch took an update to Matt Sperling's Worlds deck (with input from the incomparable Red Deck PTQ master Patrick Sullivan) to a win in San Diego on the back of Tattermunge Maniac! The deck has a lot of haste—from Goblin Guide through Hellspark Elemental to six three-drops—but staying power as well with Figure of Destiny. The oddball singleton for this 23-land deck? Shard Volley.

3 Leyline of Punishment 2 Koth of the Hammer

Michael Belfatto didn't go with Tattermunge Maniac, but he did pick up a Blue Envelope with his different take on a Red Deck.

We see the same 23-land configuration, with Arid Mesa and Scalding Tarn powering up not just Searing Blaze (as in the Hatch deck), but also Plated Geopede. Teetering Peaks lends a hand with—again—significant haste threats, but with Boggart Ram-Gang tagging in on three. 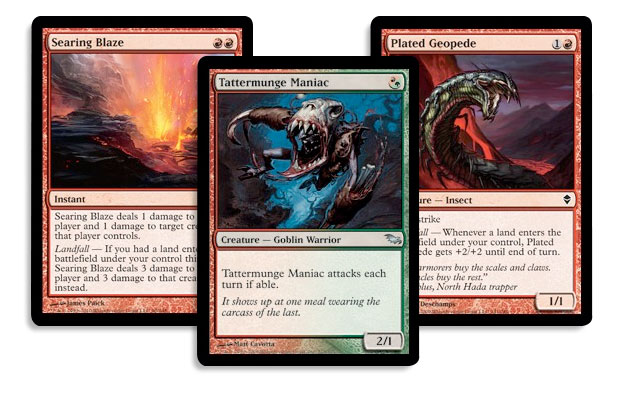 Both decks made ample use of new cards, including Arc Trail and Koth of the Hammer.

Red seems like a fine metagame call; awesome against Faeries, and hard to match so long as White Weenie stays out of vogue.

We would be remiss in ignoring the performance of Faeries. In addition to winning one of the two Roanoke, VA PTQs (Chris Mascioli actually bettered a Saturday Top 8 with a Sunday win), Faeries won another Magic Online PTQ.

Here is a player who wants to win the mirror!

No copies of Doom Blade or Disfigure; no Smother ... But four copies of Peppersmoke! Die other Faeries player, die! 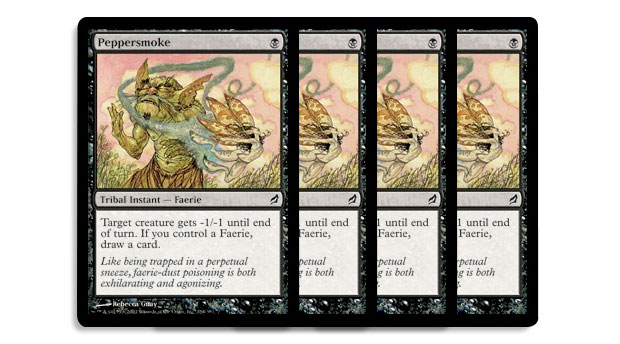 Additional customization—Jace Beleren main and Jace, the Mind Sculptor side.

This deck is very close to Pejho's. Three copies of Spellstutter Sprite; a two-two split between Inquisition of Kozilek and Thoughtseize; main deck Peppersmoke (if a different number). 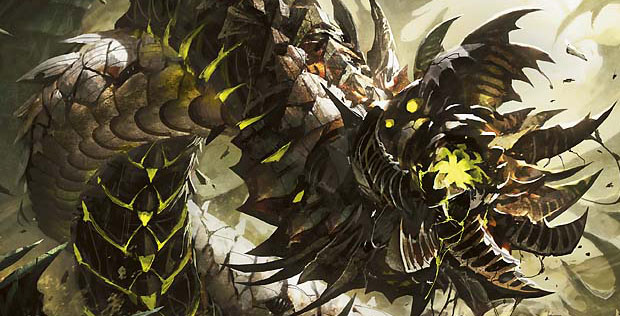 The most glaring difference is the removal of Jace Beleren but the main deck inclusion of Wurmcoil Engine.

But you know what they say... Anybody Who's Anybody plays Extended's best Titan. Some main.