nnistrad Standard continues to barrel forward with transforming double-faced cards... and you might flip out at the Transformers-like choices being made by some of the top decks in this metagame.

Many of us first saw the "Robots" look at the Wolf Run Ramp strategy as a pre-States version innovated by Living End progenitor Travis Woo, though Travis credits ascending R&D member Gavin Verhey with many of the deck's innovations.

Corbett Gray ran with the Robots and earned himself a semifinals appearance in the Open.

Hmmm... Most of you probably know how the Wolf Run Ramp family of decks work already. You set up Kessig Wolf Run and Inkmoth Nexus with Primeval Titan and then kill the opponent with massive infect (which may or may not be Plan B; I mean an active Primeval Titan is quite the threat already, no?).

Since Player of the Year frontrunner Owen Turtenwald's win at the Wisconsin 2011s, the Dungrove Elder version of Wolf Run Ramp seems to have been the dominant build. Dungrove Elder is a fast potential turn two play, and a difficult threat to deal with for especially control decks.

... So all of that together makes decks like Gray's look positively different. What is different about this deck?

Sphere of the Suns and Copper Myr. These probably seem like strange additions in a green-based Ramp deck, especially given the advocacy for Birds of Paradise and Llanowar Elves by some of the game's top players. Isn't Copper Myr just a terrible Llanowar Elves? Isn't Sphere of the Suns generally just worse in a green deck? Yes, and yes... except for this deck's mana base.

Kessig Wolf Run. Four Kessig Wolf Runs. In addition to four Glimmerposts, the Wolf Run Robots version runs not two but all four copies of Kessig Wolf Run. One of the issues with these kinds of decks is that—especially given the popularity of Blue-Black Control, a deck with not just counterspells but Doom Blades—they can be threat-locked. When you play all the Kessig Wolf Runs, you are more likely to naturally draw one even without Primeval Titan... and then every creature you draw—every mana dork from the lowly Copper Myr to the even more inoffensive Birds of Paradise—becomes a potential threat.

With four Glimmerposts, four Kessig Wolf Runs, four Inkmoth Nexuses, plus even more colorless-producing lands, we have a deck with fewer Forests, therefore less likelihood of hitting green on the first turn... which explains the odd choice of mana accelerators (and you can forget about building around Dungrove Elder).

The other major super cool thing going on in this deck is unlucky out of the sideboard. Thirteen unlucky! Blasphemous Act, upon first glance, seems like it should be prohibitively expensive... Until you realize this is a card that is designed to mess up lots of creatures. An opponent playing White-Blue Humans or Green-White Tokens will often have tons of little guys on the battlefield (plus, your creatures help set up the discount). Generally, Blasphemous Act will often be comparable to Slagstorm or Day of Judgment in terms of cost; and, long story short, ka-pow. Thirteen damage is enough to take down almost every reasonable creature in the format. 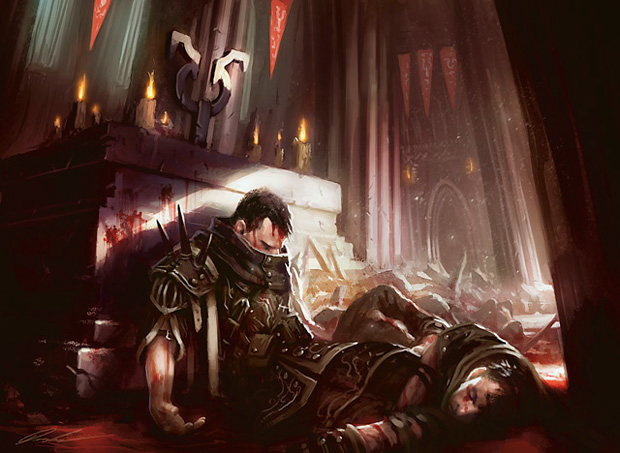 The Insectile Aberration-to-be is fast becoming one of the go-to creatures in Standard as well as larger formats. This week we can see Delver of Secrets in play in a couple of very different decks.


I think that we will see Blue-Red Tempo rise into one of the most popular decks in the format... The cards out of Innistrad are just so conducive to its success.

Delver of Secrets (and, in Cai's build, Stromkirk Noble) let the deck come out of the gates on turn one, racking up fast damage like a Red Deck. But like a blue aggro-control deck, Blue-Red Tempo can lean on Mana Leak or Negate to defend even a small lead, if for a short time, with the main goal being more turns dealing more damage.

But what this deck really wants to do is just burn the opponent out.

Opponent attacks with whatever.

Or, in this context, how much damage do you need Snapcaster Mage and Brimstone Volley to do when you have set up your opponent with a first-turn Delver of Secrets and/or Stromkirk Noble?

One of the best cards in the Blue-Red Tempo deck is Ponder. Now provided you draw an Island, Ponder helps this land-light deck play like a 24-land deck, but in this deck, Ponderalso sets up the transformation from Delver of Secrets into its 3/2 flying form.

Delver of Secrets in White-Blue: The Next Step in Illusions


Adam Prosak traded in his Darkslick Shores for Seachrome Coasts this past weekend (though he kept the Snapcaster Mages) as he earned a Top 16 finish in Las Vegas.

Essentially we see the Illusions shell (Lord of the Unreal locking arms with Phantasmal Bear and its buddies), but with Delver of Secrets again helping out the offense from turn one. On the one hand the deck loses Phantasmal Dragon, but on the other hand it gets a massive discount in mana (three cheaper) for probably a more reliable source of damage (potentially 3/2 attacking on turn two, no "look at me and I die" Illusion drawback). Again, we see Ponder helping to set up Delver of Secrets (on top of doing all the other stuff that is awesome that Ponder can accomplish in terms of hand-sculpting and answer-finding).

Many of these Delver of Secrets decks play the previously unplayed Vapor Snag. This card is both a great answer to expensive creatures (if short term), with its 1 point of life loss combining conveniently with "being the beatdown" and a route to "building your own Æther Adept" when combined with Snapcaster Mage (though it can be an entirely instant Æther Adept, as a bonus); you can also use Vapor Snag (if a little bit painfully) to set your Snapcaster Mage back up for an additional re-buy.

The Delver + Illusions deck is an almost pure aggro-control deck... Awesome offense backed up by Mana Leak. Its goal is a tempo-based attack further facilitated by the speed of Phyrexian mana (Gitaxian Probe is not just the fastest cantrip of all time, but helps balance the relatively low land count of this deck). To that swift and tempo-tacular end, I think the coolest thing about Adam's deck is the presence of Frost Breath... not a card I would have originally pegged as being Constructed playable (but probably quite synergistic with Snapcaster Mage in the right matchups).

And Now for Something Completely Different: Blue-Black Heartless Summoning


So what's going on with this deck?

Superficially it is a blue-black deck that relies more on creatures than instants; but more than that, there is method to the shift. Heartless Summoning significantly discounts Mukhar's creatures... kind of like a persistent Dark Ritual.

Sphinx of Uthuun is a 4/5 flying Fact or Fiction for just one more mana than the original with Heartless Summoning on the battlefield. I'd say that is downright reasonable... except that would be a complete understatement.

With two Heartless Summonings on the battlefield, you get some strange synergies. For example, a completely free Solemn Simulacrum that dies immediately... ergo kind of like a zero-mana Rampant Growth + cantrip.

Week after week after week I find myself liking Innistrad more and more and more. This is a set that combines well with existing awesome cards (Primeval Titan setting up not just Kessig Wolf Run but now Glimmerpost; Snapcaster Mage recycling Mana Leak), but it allows players to play all kinds of goofball different stuff... and it is all good! We have everything from the return of Dismember to a discounted seven-drop finisher to the surprising playability of an M12 "Limited" card to hold a lead.

We've got weenies, several flavors of control (from battlefield to counterspells), and a shifting palette of threats (to Dungrove Elder to not to Dungrove Elder, or where to stick your Delver of Secrets), and it isn't clear what is going to be best (or what is going to show up even) from one week to the next. Heck, every couple of minutes it seems like the best thing you can do is attack someone with a Plague Stinger.

Now really does seem like a pretty great time to be playing Standard.