e are very excited to announce the 2014 Grand Prix schedule, and with it an increased prize payout structure. The growth in attendance at Grand Prix around the world demonstrates the ever-increasing appetite for players to have a competitive arena in which to test their skills. With forty-six Grand Prix across twenty-one countries and a variety of formats, this slate of events does just that.

As the number of players at Grand Prix has grown, so should the overall rewards. Therefore, the Grand Prix prize payout is increasing to $35,000 starting with Grand Prix Dallas/Fort Worth in December. This is the base payout used for Grand Prix with fewer than 1,200 participants and pays down to 64th place. For Grand Prix with 1,200–2,399 participants, that prize pool grows to $44,000 and pays down to 100th place. For Grand Prix with 2,400 or more players—our very biggest, and often most challenging events—that purse grows to $54,000 with the Top 150 players receiving prize money. The 1st-place prize for all Grand Prix will be $4,000, up from the previous $3,500. All told, that's a minimum of $1.6 million in cash prizes at the Grand Prix level. For a complete breakdown of the attendance-based prize structure, click here.

The increasing attendance at Grand Prix, along with lessons learned throughout 2013 with the success of online preregistration, has led us to remove Saturday onsite registration starting with Grand Prix Dallas/Fort Worth. Ensuring a positive player experience is one of our key priorities, and starting the tournament at the announced time is a big part of this. At this time, all Grand Prix in 2014 except those run in China will be offering online preregistration. We're working with our Chinese tournament organizers on possible preregistration solutions for those events. Players will still be able to register onsite Friday, as well as take part in last-chance Grand Prix Trials, the "Foiled Again" event, and other side events.

Another change coming to Grand Prix involves how Team Grand Prix are run. The return of Team Grand Prix has provided a different and exciting way for players to take part in premier play; however, the Booster Draft structure of Day Two required a number of rounds that made for too long a day for players, judges, and tournament staff. Starting with Grand Prix Kyoto in November, teams making Day Two will play five rounds of Sealed Deck with a new card pool before cutting to the Top 4. The Top 4 teams will Team Booster Draft against one other team for one round, and then the winning teams from the semifinals will draft again and play one round for the title.

To be able to run the correct number of rounds each day and ensure as clean a cut as possible, we are eliminating all byes from Team Grand Prix starting with Grand Prix Kyoto. As a result, there will also be no Grand Prix Trials run in conjunction with Team Grand Prix.

Because 2014 features four Pro Tours, the Grand Prix schedule will be broken down into four seasons. Here's how the 46 Grand Prix are broken out by region: North America (21), Europe (12), Asia-Pacific (6), Mexico/South America (4), and Japan (3). A complete list of Grand Prix dates and formats can be found at the end of this article. Participants at all Grand Prix in 2014 will receive an alternative-art premium Batterskull (while supplies last). 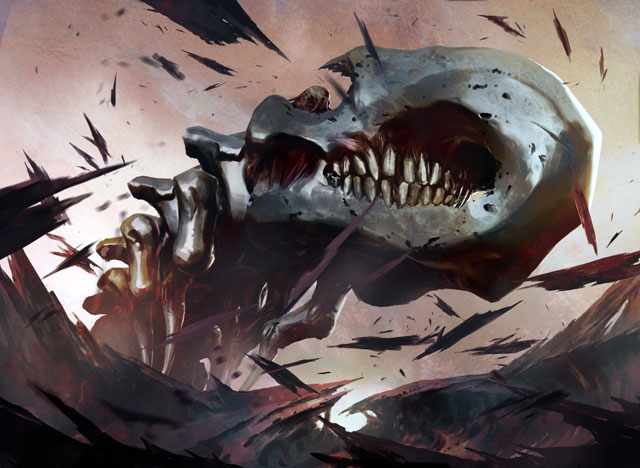 The first season, which provides invitations to Pro Tour Journey Into Nyx for top finishers, runs from December 2013 to early March 2014. The cities featured in this block of the schedule are Dallas/Fort Worth, Shizuoka, Prague, Sacramento, Vancouver BC, Kuala Lumpur, Paris, Mexico City, Barcelona, Melbourne, and Richmond. Grand Prix Barcelona takes place the week after Pro Tour Born of the Gods in Valencia, allowing traveling pros to extend their stay in Spain in the hunt for more Pro Points.

The second season begins in mid-March and runs until the end of May. Montreal, Buenos Aires, Cincinnati, Vienna, Beijing, Phoenix, Philadelphia, Nagoya, Minneapolis, Warsaw, Atlanta, Manchester, and Sao Paulo host Grand Prix during this season, with top finishers earning invitations to Pro Tour Magic 2015. Grand Prix Atlanta is the week after Pro Tour Journey Into Nyx in the same city, once again providing back-to-back weekends in the same area.

As the calendar turns to summer, the third season opens in mid-June and runs until the end of August. Grand Prix will be played in Moscow, Chicago, Washington DC, Milan, Worcester (Massachusetts), Taipei, Portland, Utrecht, Sydney, and Kobe, and feed Pro Tour "Huey." Grand Prix Portland comes one week after Pro Tour Magic 2015 in Portland.

The fourth season rounds out 2014 with stops in Salt Lake City, Orlando, Shanghai, Los Angeles, Stockholm, Nashville, Santiago, New Jersey, Madrid, Ottawa, San Antonio, and Strasbourg. Top finishers at these events will earn invitations to Pro Tour "Dewey" in early 2015. Grand Prix Los Angeles is the week after Pro Tour "Huey" in Honolulu, offering a convenient travel route for many coming back from Hawaii to stop off and enjoy a Grand Prix.

With forty-six Grand Prix and the addition of a fourth Pro Tour opening up another Pro Tour Qualifier round, the 2014 season will offer many opportunities to experience competitive Magic. I hope to see you many of you enjoying the challenge of playing Magic at that level. We'll continue to closely monitor your feedback to make this play experience as pleasant as possible!

* Editor's note: This schedule has been modified since the initial publication. Grand Prix Milan moved from August to June, and Grand Prix Utrecht moved from June to August.