Dragon's Maze is a multicolor set with tons of powerful cards and lots of mana fixing, especially in Sealed, where you'll be guaranteed a few Guildgates thanks to the pack layout. Don't be afraid to play three or even four colors when you open up your sealed pool. I'll be picking up a Selesnya deck this weekend, but you better believe I'll be playing Ral Zarek if I'm lucky enough to open him. 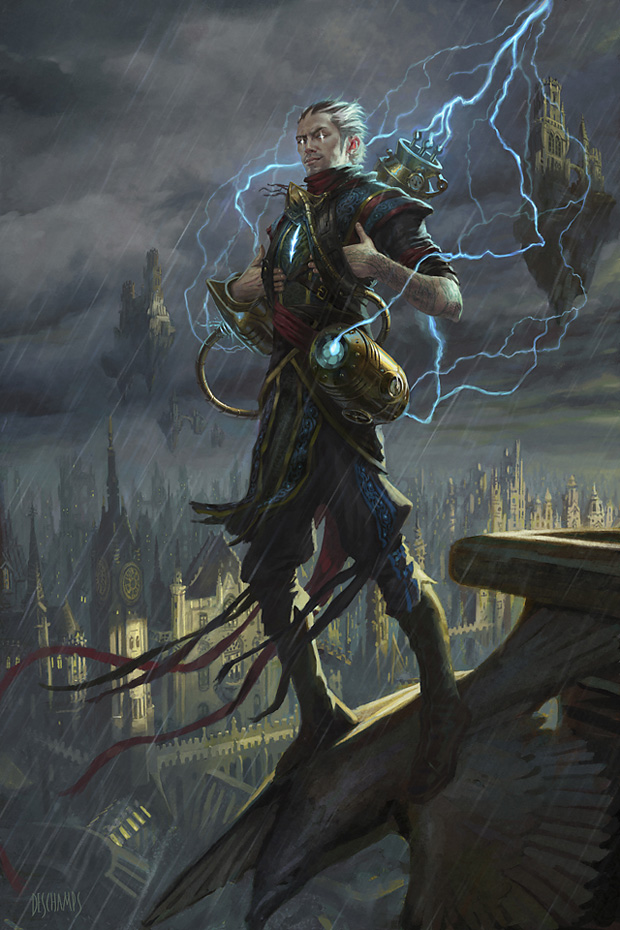 Playing with lots of colors makes deck building interesting, but it also makes it difficult. Like all Limited formats, having a reasonable curve for your deck is going to be important. You don't want to sit around and do nothing for the first three turns of the game. However, managing your curve in a multicolor format offers some unique challenges. For example, let's say we're playing our Selesnya deck and we've decided to splash blue and red thanks to some lucky Guildgates and a good rare and/or mythic rare or two. Zhur-Taa Druid will almost certainly make its way into our deck, but it may be unreasonable to assume we'll be playing it on the second turn. Our red splash is likely made possible with Cluestones and other fixing. Depending on the number of red-mana-producing lands we have, it's probably more correct to categorize our Zhur-Taa Druid as a three- or four-mana creature for the sake of deck building, because that's the turn we're probably going to be able to cast it.

Play your bombs! Oftentimes, players will get caught up in staying on color and miss out on some epic bomb opportunities. Gigantic rare monsters are notoriously powerful in Sealed; don't be afraid to splash a third or even fourth color if it means you'll be able to cast a scary rare card. The Prerelease is probably the best time to test the limits of the format and experiment with multicolor monstrosities. Have you and your friends been debating the power level of a specific card? Throw it in your sealed deck and take it for a test drive.

There's a lot of speculation about the direction Standard will go in after Dragon's Maze releases. Powerful cards like Voice of Resurgence, Sire of Insanity, Advent of the Wurm, Ral Zarek, and many others will certainly see play, but their home isn't abundantly obvious at first glance. I'm going to talk a bit about some of my favorite cards from Dragon's Maze and discuss their possible Standard applications.

The most obvious effect Dragon's Maze will have on Standard has to do with control strategies. Since the release of Return to Ravnica, we've seen Sphinx's Revelation be the crux of control strategies in Standard. With the introduction of cards like Notion Thief, Sire of Insanity, and Council of the Absolute, we'll start seeing control decks that rely less on cheap spot removal and expensive card draw and move toward a world where control decks will be using sweeping mass-removal effects; Planeswalkers; and big finishers like Niv-Mizzet, Dracogenius. I've seen mixed reviews for Sire of Insanity around the web, but I assure you that the card will be quite strong. Resolving Sire of Insanity when you're ahead puts you in an excellent position to win the game and Cavern of Souls can guarantee your control opponent is going to lose his or her hand.

Ral Zarek may be the best Planeswalker since Liliana of the Veil. However, it's still unclear what types of decks we'll be seeing the new Planeswalker show up in. The card is tremendously powerful in all types of decks, but it's at its best in more aggressive strategies. Perhaps we'll see aggressive four-color decks that use Ral Zarek to his full potential. I expect the card to initially be added to red-white-blue decks with some degree of success, but the card will reach its fullest potential when it's doming people and tapping blockers out of a blue-black-red or blue-red-green aggro deck.

Turn & Burn is another card that will grab the attention of the strongest deck builders. The card offers a great deal of utility and gives control strategies a real instant-speed answer to Thragtusk, even if the opponent has a timely Cavern of Souls.

Reap Intellect seems like one of the best spells to ramp into against midrange/control strategies. I never loved cards like Cranial Extraction, Thought Hemorrhage, or Slaughter Games unless I actually hit a card in my opponent's hand. Playing Reap Intellect and Cyclonic Rift in the same deck lets me KO my opponents by returning all their permanents back to their hands and then neutering their libraries for the remainder of our games. This isn't a worthwhile plan against the most aggressive or most controlling decks, but it seems like an excellent way to punish the midrange trend we've been seeing in new Standard formats as of late.

Varolz, the Scar-Striped is another card that could make a big splash in Standard. Sure, the card is good with Lotleth Troll, but that's obvious. I'm most impressed with its interaction with Vampire Nighthawk. These two cards together will allow a player to build his or her own Baneslayer Angel for very little mana. We can expect to see some aggressive Jund strategies that use cards like Spike Jester to maximize the effectiveness of Varolz.

Right away, I know that I want to be playing Voice of Resurgence and Advent of the Wurm in this deck. These cards synergize well with the populate mechanic. Voice of Resurgence also synergizes well with Geist of Saint Traft, Selesnya Charm, Simic Charm, and any other pump spells we decide to play. Opponents will be hard pressed to find an advantageous block when we have lots of pump spells and they're getting punished by a beefy Elemental token for every spell they cast to interact. Things will get particularly difficult for opponents when we have multiple copies of Voice of Resurgence on the battlefield.

However, Delver of Secrets will be a high hurdle to overcome if we're playing twenty-four lands. It's unlikely we'll have enough instants and sorceries to reliably flip the card if we're playing that many lands. The deck will no longer pick up the seemingly free wins that come from a second-turn Delver of Secrets flip, but the overall consistency and power of the deck will dramatically increase with the changes.

Conveniently, I'll be able to fix up the deck's mana base significantly by removing the blue one-drops. Islands will no longer be necessary because we don't need the blue mana on turn one anymore. The deck will likely perform well against control and midrange strategies. Against the more aggressive decks, we can play Trostani, Selesnya's Voice post-sideboard and populate our way to victory.

Here's what the main deck could look like. Remember, the format will likely be more defined by the time you have an opportunity to play this deck. You'll probably need to update the list to be better suited for the expected metagame if you want to perform your best.

Again, building a sideboard this early on wouldn't accomplish much. I'm sure I'd want a couple copies of Pacifism and Trostani, Selesnya's Voice, but beyond that everything is still up in the air.

We're less than forty-eight hours away from the Dragon's Maze Prerelease. We've already discussed the possibilities at length and we've barely scratched the surface. Stay tuned to Magic Online's Daily and Premier events to watch the formats shift with the addition of the latest set. Don't miss your opportunity to be one of the first players to play with the newest cards. Hit the forums to discuss your favorite card from Dragon's Maze and how you plan to use it in your Standard deck.