In with the New!

ello and welcome to the latest installment of Perilous Research, DailyMTG.com's exclusive Magic Online column. We have a lot to talk about this week: The latest round of bannings are sure to shake things up in Pauper. The banning of Bloodbraid Elf may affect Modern Jund and many four-color creature strategies in the format. Lastly, Gatecrash release events are taking place this weekend in card shops around the world. Gatecrash Prerelease events start just one week later on Magic Online. I'd like to talk about the implications of an earlier Magic Online release and go over some of the basic Limited strategy you may need when competing in Sealed events next weekend.

Let's start by talking about the changes to Pauper. Pauper is a Constructed format played primarily on Magic Online. Players can use any common cards available on Magic Online to construct their decks. The Pauper format has, at times, been one of the most interesting Constructed formats available. Oftentimes, it feels like one is playing some crazy Limited/Vintage hybrid format. The format has grown with the Magic Online community, but the interactivity of the games suffered over the last couple years. The Storm decks that finished with Empty the Warrens and Grapeshot were becoming oppressive and Infect decks with access to Invigorate were ending games of Pauper before there was any game to be played. Empty the Warrens, Grapeshot, and Invigorate were all removed from the format via bannings that took place on January 28. This is huge for the Pauper community. Pauper is a great format to begin playing Magic Online Constructed; the events have real prize support and the decks are usually easy to acquire for newer Magic Online players. A lot of people are beginning to wonder what decks are viable after the latest round of bannings. Let's take a look at some of the decks without Grapeshot, Empty the Warrens, or Invigorate that have performed well in the most recent Pauper events. 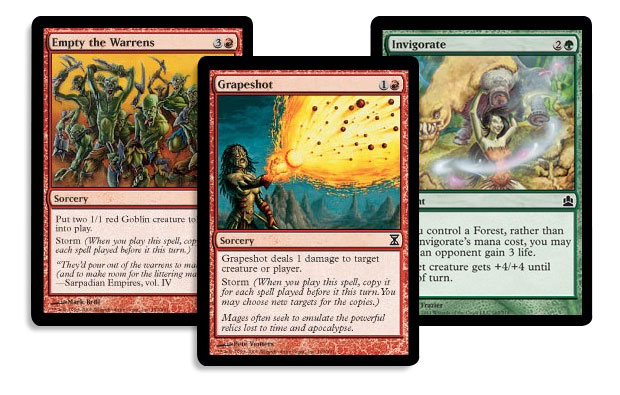 Locus strategies have been rising in popularity since Glimmerpost was printed. The deck uses Cloudpost in conjunction with Glimmerpost to produce huge amounts of mana and bury the opponent in card advantage and quality. Many cards here, like Electrickery, may no longer be necessary without Empty the Warrens being a factor in the format. The slower nature of the format will also allow Locus players to be more dedicated to their big mana plan, perhaps using Expedition Map and playing four copies of Ulamog's Crusher.

Aggressive green decks have been a major force in Pauper for some time. This deck seems like it could be positioned well in the coming weeks as players begin experimenting with interactive midrange creature strategies that weren't viable alongside Storm Combo and Infect. Green has a lot of efficiently costed creatures at common rarity. The deck focuses on getting an aggressive start. That's not to say the deck doesn't have any tricks up its sleeve. For example, Shinen of Life's Roar can demolish the entire enemy team if it picks up a few pump spells.

Affinity has been a part of the Pauper metagame since the format first began. The deck plays startlingly efficient creatures and has the ability to all-in a tapped-out opponent with Atog and Fling. We can expect Affinity to be a huge factor as we enter a new era of Pauper. Ancient Grudge won't be forgotten, though, and there's only so much that Affinity can do once people have a reasonable sideboard to defend against the deck's explosiveness.

Mono-Blue strategies are another common sight in Pauper. The less-than-optimal mana fixing in the format encourages players to play one- or two-color decks. There are many different Blue decks, but the list above takes advantage of many of the exciting tricks available to the strategy. Ninja of Deep Hours sneaks in for card advantage and it even lets you rebuy your Spellstutter Sprite if you were lucky enough to have one. Spellstutter is almost always live in this format. Think about it: aren't all the best commons one- and two-mana cards? Exactly!

I'm sure we'll begin to see more strategies emerge in the absence of Storm and Infect. Decks like White Weenie and three-color tempo strategies may become viable again. I'll be sure to keep my finger on the pulse of the format and return with some hard data in a month or so.

The latest round of bannings didn't just hit Pauper. The mighty Bloodbraid Elf fell victim to the ban hammer in Modern and many players are beginning to ask if Jund is still a deck. I think it's extremely safe to say that Jund is still a tier one strategy. Players can simply replace their Bloodbraid Elfs with Huntmaster of the Fells; Thrun, the Last Troll; Falkenrath Aristocrat; or even Sorin, Lord of Innistrad. I think Jund may have lost a few percentage points in some already strong matchups, but the deck may have actually improved against creature-light strategies that were always happy when Bloodbraid Elf flipped into Abrupt Decay or Terminate. After all is said and done, I think banning Bloodbraid Elf will have minimal effects on the current PTQ format's metagame.

Hopefully, you had the chance to attend your local Prerelease last weekend. Gatecrash is great for exciting and interactive Limited games. Be sure to find your nearest Gatecrash release event location for this weekend if you missed the chance to compete last weekend, or if your competitive spirit or love for the game is strong enough. I found my way over to Gamer's Edge in Kearny, New Jersey, for the midnight Prerelease last Saturday "morning." Release events are just one day away and Magic Online Prerelease events begin the following weekend.

Card evaluation skills are put to the test in the earliest Limited events. Some cards are obviously powerful, but others are less forward about their power level. I'd like to briefly discuss the five guilds of Gatecrash and talk about their optimal placement in the Limited format.

Orzhov decks will be the least concerned with a strong mana curve but will usually need to play eighteen lands. The Orzhov deck is great in racing situations if you're able to use multiple extort triggers. Be sure to use Boros as your escape hatch for a splash color if you're having trouble picking up enough Orzhov cards; the Dimir cards don't synergize especially well with extort. Also, Gift of Orzhova may be a reasonable card in the Orzhov deck, but the card dramatically increases in value when it's played in the Boros deck.

I've only had limited experience with Dimir, but I'm beginning to think that it will be my guild of choice. The deck can be a trap in Limited, as both Simic and Orzhov do not synergize well with the guild of secrets. However, a strong Dimir deck can systemically hinder an opponent's game plan while milling him or her out. I believe the Dimir deck has great potential, but it can be dangerous if someone else in your draft decides to force it hard.

Gruul seems underpowered in Sealed and that may lead to it being under drafted in the early stages of the Limited format. Reasonable Gruul decks are extremely difficult to play against. All the creatures double as pump spells and one needs to recognize that blocking for a trade is usually going to be a trade with a bloodrushed creature.

Boros is blazingly fast and punishes weak draws or bad mana curves like no other guild in Gatecrash. I envision an optimal Boros deck playing sixteen lands (or even fifteen) and stocking a good number of one-mana creatures. Boros seems similar to Infect in many ways. The deck is very strong when built optimally, but it's likely that there will be a good number of Boros drafters at the table and you may have to dip into Orzhov or Gruul. Splashing a third color is pretty bad with the inexpensive Boros cards, but I imagine this will be necessary in the early stages of the format. It's also worth noting that most of the white cards with extort are actually absurd in the Boros Limited deck.

Simic seems to reward a strong mana curve more than the other guilds. Curving out with the Simic deck (playing consecutive creatures or spells with all of you mana for multiple turns) is an extremely big game. Simic decks have inevitability with large creatures but they're put into a racing situation against almost every other guild. Simic is also a reasonably safe deck to draft; most players are leaning toward Boros or Orzhov right now and Simic will likely be open in early drafts. Gruul also works as a nice escape hatch if the Simic deck isn't panning out, as blue-red-green is an excellent three-color strategy in Limited and Gruul's beefiest monsters synergize well with the evolve mechanic.

Next week, we'll take a look at the latest Modern results and see what kind of decks are winning in the wake of Bloodbraid Elf's banning. We'll also talk a bit about the implications of an earlier set release on Magic Online. Have fun at your Gatecrash release events and be sure to get a draft in with your friends using all the prize packs you win. I believe Gatecrash drafts well and it would benefit greatly to have some draft experience before you jump into the deep end of Magic Online draft events.