elcome back to Perilous Research, DailyMTG.com's exclusive Magic Online column. Last week, I took an in-depth look at the state of Modern on Magic Online. Since then, there has been a whirlwind of changes happening to the format. One of the newer archetypes I talked about, Zoo, went from being a fringe deck to being the new king of tier one. Another similar strategy, Gruul, has also picked up quite a bit of steam, quickly cementing itself as a viable (and quite strong) PTQ option. 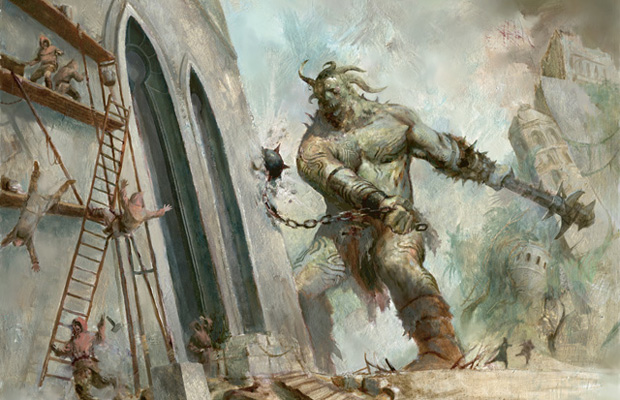 These changes to the Modern format have a lot of implications for the format's direction. Today, I'm going to look at the latest aggressive strategies in Modern and discuss the changes they might incur on the format. Let's start by taking a look at some decklists.

The Modern Gruul deck picked up a lot of new toys with Gatecrash. Ghor-Clan Rampager, Experiment One, and Burning-Tree Emissary all make the cut. This deck is brutally aggressive. It's quite rare that a keepable hand isn't capable of killing the opponent on the fourth turn. The deck has excellent mana—only playing two colors greatly reduces the amount of damage taken from lands and drastically improves the matchup against other aggressive decks. Burning-Tree Emissary and a menagerie of one-mana creatures ensure that you can keep the pressure on, even when your opponent has a fistful of removal spells. This deck is capable of playing more creatures at a faster rate than most midrange decks can play their removal. Opponents are forced to tap out for removal whenever possible, meaning they're unable to establish a board presence while they're being beaten to a pulp.

Gruul may be the flavor of the week, but the most powerful new aggro deck is Zoo. This deck is reminiscent of Raphael Levy's Gaea's Might Get There Zoo strategy that carried him to back-to-back Grand Prix titles a half-decade ago. The deck struggles against the new Gruul strategies because both decks are doing similar things, but this version takes a lot of damage from its lands. However, sacrificing a few life points gives this deck a nice boost in power. Tribal Flames and Might of Alara each represent 25% of a player's starting life total. At that rate, it will only take four spells to win the game! Boros Charm makes another appearance here, effectively countering cards like Pyroclasm or Wrath of God and dealing 4 damage to the dome of any player unfortunate enough to let his or her life total dwindle.

The format hasn't seemed to fully react to this latest class of aggro in Modern. Let's look at some of the most popular archetypes and talk about the changes we can expect them to undergo in an effort to battle the aggression.

Jund decks haven't changed much since Jacob Wilson and Josh Utter-Leyton faced off in the finals of Grand Prix Chicago late last year. The banning of Bloodbraid Elf prompted players to swap in Huntmaster of the Fells, but the deck has remained in a stasis for the most part. Some might even argue that Huntmaster of the Fells is an upgrade to Bloodbraid Elf in the current Modern.

However, the latest wave of aggressive decks are the first batch of Modern aggro strategies (excluding Burn, which can be easily beaten with four or five sideboard slots) that actually beat Jund. Jund's greatest selling point was always that it had no real bad matchups. Sure, Tron could be difficult, but it wasn't the type of matchup where you felt helpless. Gruul and Zoo punish Jund for its mana base and apply pressure at a rate that current Jund decks can't keep up with. Lingering Souls was added to Jund in an effort to help against Robots and Infect. The card synergized well with the overall strategy and became a staple, even long after Robots and Infect were no longer being played by significant portions of the field.

I think it's reasonable to imagine that next week's Jund decks abandon Lingering Souls in favor of Kitchen Finks. Kitchen Finks is quite strong against both Zoo and Gruul, while Lingering Souls is clunky and will rarely result in a two-for-one after its two-turn investment. We can also expect the average casting cost of Jund's removal to decrease. Expect more copies of Terminate and Abrupt Decay, and you might even see a few Disfigures in some sideboards. Expect fewer copies of Liliana of the Veil and Maelstrom Pulse as these cards, in abundance, will prove to be too slow in the face of Zoo and Gruul.

Tron decks have reliably been able to produce a Karn Liberated or Mindslaver on the third or fourth turn for the last few weeks. The deck has always been strong against the creature-based decks of the format, but that has changed drastically with the advent of the latest aggressive creature decks. Expect Tron players to play four copies of Wurmcoil Engine and Pyroclasm in their main decks in the coming weeks. These two cards becoming four-ofs will be a crucial evolution of the deck if it wants to remain tier one in the face of Zoo and Gruul. The big spells that will need to get removed will likely find their way into the sideboard and give the Tron decks less room to experiment with anti-combo iterations.

There have been a lot of iterations of this deck over the last few months. Only recently has this deck become a top-tier contended again. The new wave of aggro decks can be easily addressed by Red-White-Blue's excellent anti-aggro sideboard options, Lightning Helix, Lightning Bolt, and Snapcaster Mage. Lightning Helix and Lightning Bolt have increased dramatically in value here and that may even prompt some Red-White-Blue players to include a copy or two of Isochron Scepter in their deck.

Combo decks will need to be faster or play a healthy dose of cheap spot removal like Lightning Bolt or Lightning Helix. Splinter Twin fishbowls a half-turn slower than the Zoo or Gruul deck is able to through a removal spell. This likely means that Splinter Twin is no longer the top-tier combo deck. Splinter Twin will likely be replaced by Kiki-Jiki, Mirror Breaker/Birthing Pod strategies that are able to establish an early board presence and hold the gates with cards like Wall of Roots. However, I still wouldn't feel safe with a Pod deck this coming weekend unless it has been tested against the new aggro decks.

Combo needs to speed up if it wants to have a chance. Infect fell out of favor because Lingering Souls became a regular card in Modern. If Jund players move back to Kitchen Finks and abandon their Lingering Souls then it will likely give Infect the opening it needs to come back and retake its throne as the best combo deck in Modern.

The most natural reaction to a strong new contender in a metagame is usually a look back at past formats in search of strategies that would undoubtedly perform well against the latest trends. Martyr of Sands decks are likely to pick up some steam now that Combo is on the ropes. Martyr strategies have historically done well against any aggressive deck and the current wave of critters shouldn't be much different.

Junk or Doran strategies can go one step slower than the most aggressive decks and will likely enjoy a lot of success in doing so. Junk and Doran will have access to the Jund discard suite and will likely find themselves well prepared for the unknown and without any unwinnable matchups.

Gifts Ungiven and Mystical Teachings strategies can be tuned to beat whatever decks they want to, but they will often give up power in other places to do so. Gifts Ungiven seems particularly strong because Elesh Norn, Grand Cenobite has the ability to take over a game and punish players for piling the board with 2/2 creatures.

Some of the throwbacks are already beginning to show up on Magic Online. I'd like to take a look at a new Gifts Ungiven deck that seems like it's well prepared for Zoo and Gruul:

This deck has all the tools it needs to survive the early turns and it's able to take over games with cards like Batterskull and Elesh Norn, Grand Cenobite. I expect these decks to increase their count on Lightning Helix and likely shave Electrolyzes in the coming weeks. This deck seems particularly strong given the new state of the metagame. Gifts no longer needs to bother with huge anti-combo suites and can be more focused on surviving against creatures until it's able to stick an Elesh Norn, Grand Cenobite or a Batterskull.

Jund seems to have made an aggressive shift. The new Jund deck significantly reduced its average converted casting cost in an effort to overcome the faster decks of the format. Tarmogoyf is one of the better cards against Gruul and Zoo; Jund may have been too slow to keep up, but if the deck is turned into an aggressive version of itself then it will perform even or better against virtually every deck in the format with the exception of regular Jund (which is likely a bad matchup).

Next week, I'll be dissecting all the Standard archetypes to do well since the release of Gatecrash in the March Standard Deck Compendium. Be sure to join me as I talk about the implications of Nico Christiansen's victory in Quebec City and the Human Reanimator deck that seems to be increasing in popularity by the minute as of this writing."