News Flash (and We Do Mean "Flash")

ews flash—Faeries is awesome. The "flash"-y squad of Mistbind Clique, Spellstutter Sprite, Vendilion Clique, and sometimes Scion of Oona continued their butterfly-winged travels through the land of Extended success this past weekend, leading all archetypes in the Top 8 of Grand Prix Atlanta. 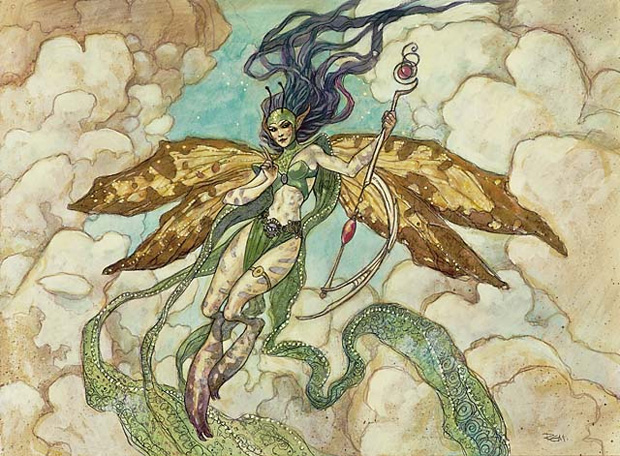 The little blue-and-black creatures came in a couple of different varieties; while all the decks played four copies of Bitterblossom and four copies of Cryptic Command, almost no other non-land card proved an un-trim-able sacred cow.

Owen Turtenwald performed his fourth X-0 sweep of a Grand Prix Day 1 with this Faeries list. Notably the deck plays twenty-six lands (the other two Faeries builds in the Top 8 play "only" twenty-five), and runs Grasp of Darkness as the auxiliary creature elimination spell (after two copies of Disfigure, which were present in all the Top 8 Faeries decks); while Grasp of Darkness might not seem anti-mirror at first blush (especially when the others were running Agony Warp and everyone had Peppersmoke), remember that the Grasp can hit a Mistbind Clique with Champion on the stack. Owen's deck played a whopping three Planeswalkers ... two copies of "baby" Jace Beleren and a solo "big" Jace, the Mind Sculptor. 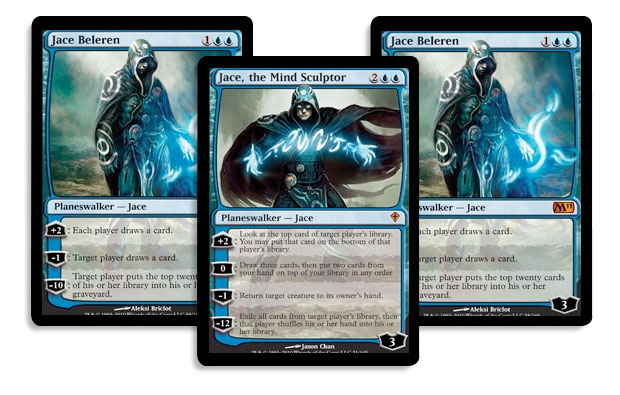 Now the head-turning looker in this build comes out of the sideboard. We all know that anybody who's anybody runs Wurmcoil Engine in Faeries (and sometimes main deck!) ... and Owen played two of those; what's more, he ran three copies of the wee Wurmcoil, Vampire Nighthawk! 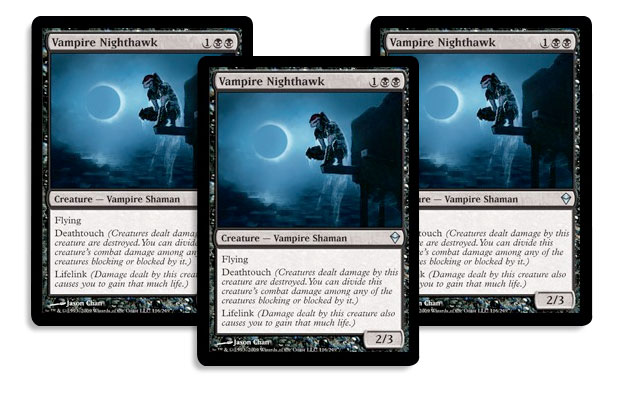 Vampire Nighthawk gives the Faeries deck faster resistance to aggression than Wurmcoil Engine by virtue of its much lower mana cost. When combined with fast removal like Disfigure and Doom Blade, Vampire Nighthawk actually looks pretty effective against aggressive Red opponents. Worst-case scenario, the Nighthawk is absorbing a Lightning Bolt, and if it ever hits, the 2-point life boost can buy additional turns, and is in fact, worth the better part of a (red) card.

John played a full set of Scion of Oona. Players tend to be hot and cold around the Scion. Originally in Standard, they were 4-of standard; later, lower creature number Faeries decks with lots of control cards (more like Owen's), relying on the All-Stars Bitterblossom, Spellstutter Sprite, and Mistbind Clique for the majority of the offense increased in popularity.

Generally the Scion decks are better at racing (their Bitterblossom tokens can double damage in a hurry), and with yet another flash creature in the mix, they gain some extra frustrating tricks (counter your removal card at instant speed).

Relative to Owen's deck, Runyon has one land less, and no Jace support.

Preordain is a hotly contested card by some blue mages (though the debate is only around whether it is an automatic include in Standard), but not a card we see very often in Extended Faeries ... Though we may start. 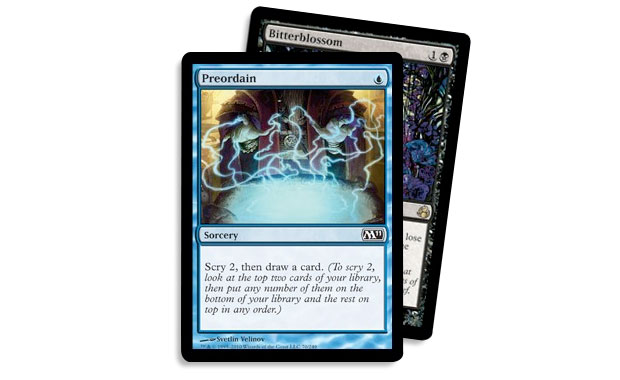 Remember, a first-turn Preordain can greatly increase the deck's ability to stick a second-turn Bitterblossom.

Now while Faeries took three of the eight slots in the Atlanta Top 8, another strategy matched their numbers, albeit divided between two different deck styles. That strategy revolves around the land Valakut, the Molten Pinnacle.

Though Valakut, the Molten Pinnacle ostensibly likes to be sitting next to a bunch of Mountains, Prismatic Omen allows Jason to pretend his other lands are all Mountains for purposes of not just killing non-flying creatures with Firespout, but killing opponents with Scapeshift.

Ford's deck is primarily green-blue, with the blue there for library manipulation and countermagic ... both blue's fortes!

Ponder and Preordain help find turn to Prismatic Omen or mana acceleration, and Cryptic Command is joined by Mana Leak on defense. A miser's Jace, the Mind Sculptor is there, presumably, to help Jason mise.

The other strategy is to lean on Scapeshift, again with Prismatic Omen on the battlefield.

From this side, you can just cast Scapeshift and get a bunch of lands (including multiple copies of Valakut, the Molten Pinnacle); all the lands think they are Mountains, so doom will generally follow. 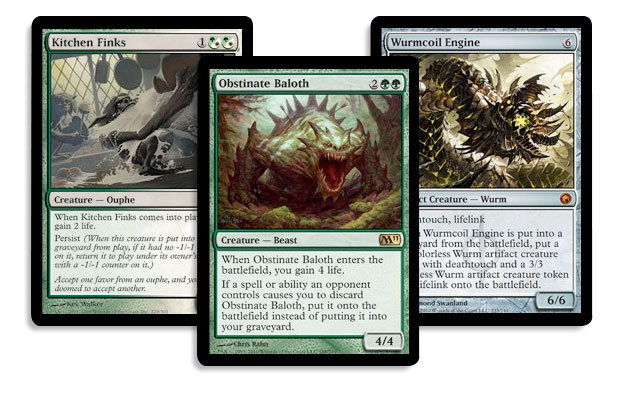 Ford's deck can beat a main-deck Runed Halo or Leyline of Sanctity due to the presence of Cryptic Command main, but he supplements the strategy with a decent sideboard battlefield plan: Kitchen Finks, Obstinate Baloth, and Wurmcoil Engine are champion beatdown-destroyers, and Vendilion Clique is an annoying clock against both other combo and control (which may or may not have a way to deal with a 3/1 flyer sideboarded).

This deck is much more like a Standard Valakut, the Molten Pinnacle-ramp deck, right down to its mana. Prismatic Omen gives Ben some of the same advantages, and his twenty-eight-land deck has got four copies of Scapeshift for the combo-kill.

Elsewise, the main distance between Ben's deck and a Standard build are around the aggressive anti-Faeries capabilities: four Great Sable Stags and four Volcanic Fallouts available.

Christian's deck is another Standard-looking Valakut, the Molten Pinnacle-ramp, but with significantly different details. Valenti's deck has much less emphasis on Prismatic Omen (only one copy) or a fast Scapeshift kill (three copies of Scapeshift). Instead, he uses creature offense, driven with help from Primal Command. 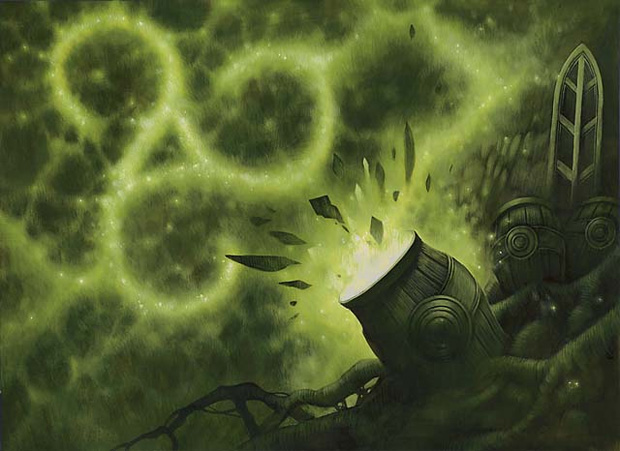 Primal Command costs five mana; presumably this twenty-seven-land deck can hit a sixth the following turn, so the most common mode will generally involve finding a creature. Both "Time Walk" (putting a land on top of the opponent's deck) and gaining 7 life are generally more popular than "Feldon's Cane" (but remember you can Command-Cane an opponent's graveyard to, say, nuke a squadron of Vengevines or Demigod of Revenge) ... All four modes on this card can be useful; there may be no spell in Extended whose successful play more consistently correlates with winning than Primal Command.

Another important card to consider is Guttural Response. Essentially this card gives Red and Green players the option of a one mana anti-countermagic countermagic. It is particularly satisfying (not to mention mana efficient and often backbreaking) to trade your Guttural Response with the opponent's Cryptic Command, and with that, probably his entire turn. 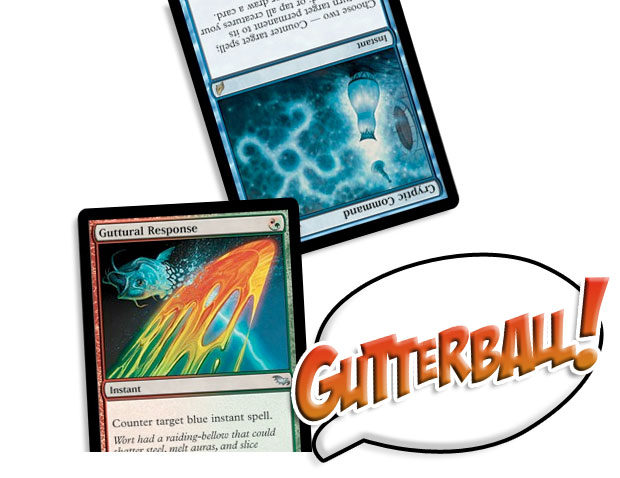 When smashing a Cryptic Command this way, I recommend proclaiming "Gutterball!" Just sayin.

Valenti said that Spellbreaker Behemoth was his MVP. A cool side effect of playing with this card is that, provided no one Doom Blades or Deathmarks it, your subsequent Primeval Titan will inevitably resolve. 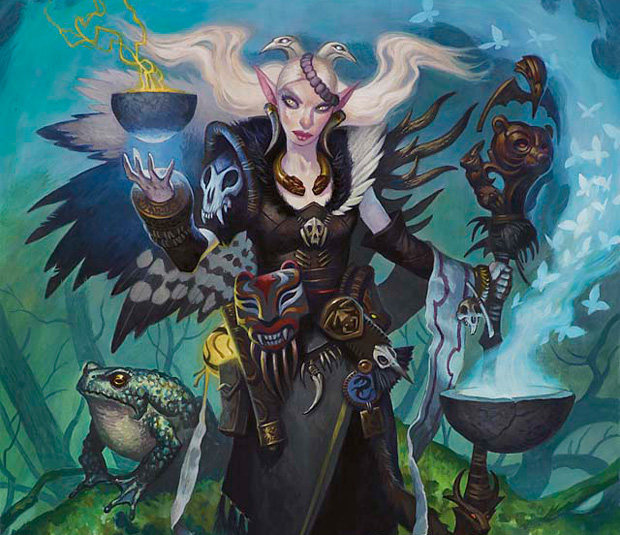 You will see essentially every Jund deck adding Fauna Shaman as an incremental two-drop in Extended, though the numbers will vary from two to four; Gindy played three copies. Fauna Shaman has a couple of different duties to perform in Jund; one of which is just offensive two-drop (i.e., get in for 2, as Kitchen Finks hits the battlefield). A more important role is to rack up a particular kind of card. For example, against a red deck (in the unlikely event it lives for more than a couple of turns), Fauna Shaman can turn any creature card into a Kitchen Finks or Obstinate Baloth. Finally, Fauna Shaman helps rack up copies of Demigod of Revenge. You can pitch up to three copies of Demigod of Revenge into the graveyard on the way to finding the fourth. Then, when you cast that fourth they all come out!

A notable sideboard card is Deglamer. To a casual observer, Deglamer seems about as good as Naturalize (or maybe worse, as it doesn't seem to "permanently" deal with the artifact or enchantment), or for that matter Nature's Claim, which costs half the mana.

Deglamer—like its competitors—is a versatile solution to Bitterblossom, Pyromancer Ascension, Prismatic Omen, and other cards; the biggest difference is that Deglamer is much better at fighting a Wurmcoil Engine than one of the solutions that would put Wurmcoil Engine into the graveyard (and by extension, turn on its 3/3-producing trigger).

The Atlanta Top 8 was rounded out by Jody Keith's White-Blue Control deck. 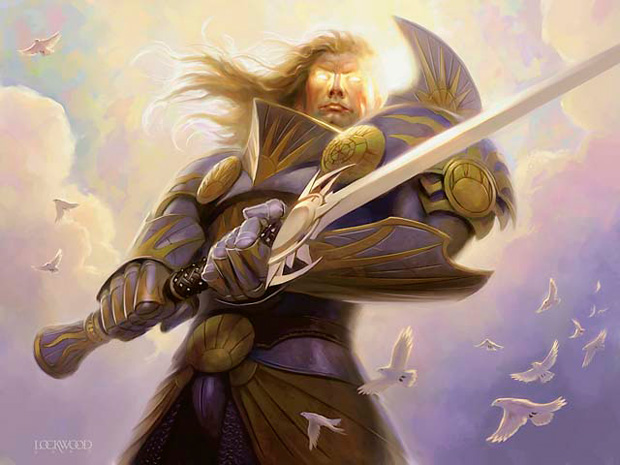 With Sun Titan as a finisher, I was surprised to see only one copy of Jace Beleren, and for that matter, in the sideboard. Jody's main line planeswalker action was from big Jace, three starting.

Keith's white-blue deck is set up to be able to do anything. Main deck he has "most of" a couple of different deck identities: anti-beatdown, eight pieces of countermagic, strong tap-out finishers. It can then be customized to emphasize each of the different plans via the sideboard.

Against beatdown, the white-blue can present a harrowing curve of Path to Exile to Wall of Omens to Kitchen Finks to Day of Judgment. All biding time until Baneslayer Angel gets a hit off. 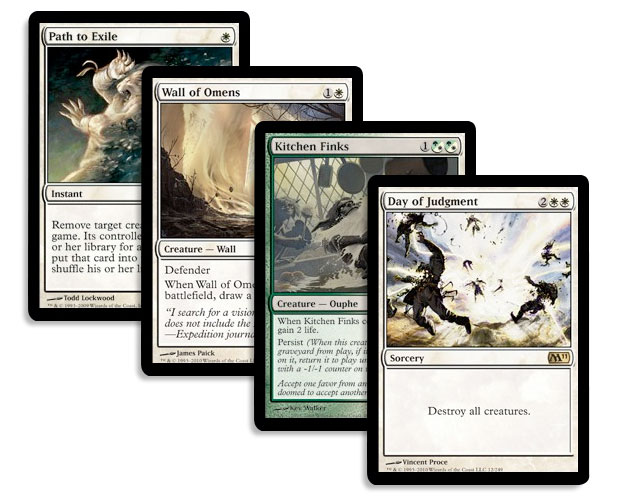 Against combo and control, it can steal mana with Spell Pierce (which can stop an on-curve Bitterblossom even on the draw). A Runed Halo naming "Mistbind Clique" is actually pretty humorous—more important against Valakut, the Molten Pinnacle, though. Ratchet Bomb and Wispmare are both fast enough to fight the format's important two mana enchantments, and also play nicely with Sun Titan.

At the end of this Extended's first big tournament, we see a pair of past Standard boogeymen rising to Top 8 prominence (with one of those ascents no surprise at all). That said, the format seems to be diverse, with decks focused on Cryptic Command next to those centered around Valakut, the Molten Pinnacle. And you know what's really cool? The biggest winner's deck ran both.