'm going to need you to pretend for a moment.

I need you to pretend you are innocent.

You're going to have to pretend real hard.

Now at least some of you are going to be wearing goofy snaggle-toothed grins, wrapped up in white linen, not knowing what I am talking about ... but trust me, this is Pretend Time. Because the mere fact that you are reading this—Top Decks, a column generally devoted to tracking the most powerful, popular, effective, or innovative decks in competitive Magic, published on the official Wizards of the Coast site—means that you are NOT in fact innocent. Not in the way you need to be to appreciate this little story. You can click the left-hand button on your mouse and almost at will summon up several weeks worth of Magic Online data. You can know almost every card in your opponent's deck based on his first couple of lands and choice of two drop. If I type "metagame" you don't immediately start scratching your head, offended at my made-up word.

But it wasn't always that way.

Let me dial you back almost thirteen years to my first Pro Tour: Dallas in 1996.

I ended up playing a pretty good deck. Don't get me wrong—I wasn't good; but the deck produced a Top 4 from Chris Pikula and Top 16 from Worth Wollpert. Good players, though, with many Pro Tour and Grand Prix Top 8s between them; the deck was good but not exactly innovative. Also, it was not exciting. You see we were "just" playing a Necropotence deck with Lightning Bolts. No one was really head over heels over what we played; no one snuck glances from around corners to espy our hidden technologies. Heck, aside from the Final Fortune in Worth's deck and the Demonic Consultation in my deck (Chris played neither) there was nothing different or remarkable whatsoever. But that didn't mean that other people—other planeswalkers—didn't have some, shall we say, differently creative juices flowing. 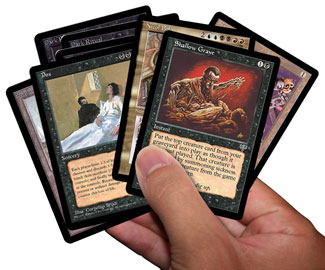 More or less a first-turn kill!

You have to understand two things reading this. Number one, you were supposed to pretend to innocence. I know you are all jaded reading about Luis Scott-Vargas and his Elves or the ho-hum turn four consistency of Storm, but back in 1996 the idea of a first-turn kill (or even most of one)—while hearing about it standing in the hallway of your first Pro Tour—was cool beyond imagining. Now thirteen-odd years back we barely had the Sligh deck, which included creatures just past the Mons's Goblin Raiders threshold. The fastest thing we typically thought of was trailing behind an Order of Leitbur. Secondly, we didn't have Top Decks, magicthegathering.com, or even The Dojo at this point. So you have to imagine some kid you probably just met running up to you in the hallway (imagine a teenage Pat Chapin, maybe) gesticulating wildly and motor-mouthing it more like this: 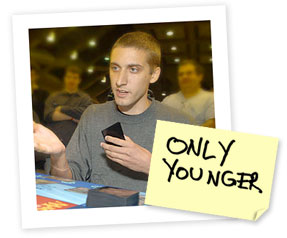 "Oh my God! You'll never believe what happened in the Juniors! Some kid—I don't know if I'm getting this right—he plays Swamp (I think), then a bunch of Dark Rituals, Poxes himself and his opponent, discards Nicol Bolas—oh, that's a Legend from Chronicles I think ... big guy—7/7—and he makes you discard if he hits you—then casts SHALLOW GRAVE (that is a spell that brings Nicol Bolas back with haste)—yes, I think you have to discard him at the end of turn or something but just LISTEN—THERE ISN'T GOING TO BE ANOTHER TURN—and he attacks the guy for 7 and NO HAND! Oh, and he has some mana left over and plays like two The Rack. First-turn kill!"

Actually, the first time I heard the story, I am pretty sure there were two copies of The Rack; forget about the fact that there were too many cards.

I didn't even know if the "kid" had done this on purpose! It seemed so wildly improbable to me! Like some perfect storm staring him in the face. Infinite possibility born spontaneously from his hand. It took me a while to realize that no one would have ever played those cards—Nicol Bolas and Shallow Grave especially—unless they had something up their sleeves.

Anyway, that was my first encounter with Nicol Bolas: a rumor of a first-turn kill down the hallway in the other room where the kiddies were battling with their Pox-Bolas-Rack-Grave decks. Excited though? Hell yeah!

What I can only assume was Nicol Bolas's first Pro Tour did not end in victory for the original. Luckily, the same cannot be said for the most recent; that is, victory was had thanks in no small part to the Bolas signature sorcery, Cruel Ultimatum.

Now there are a couple of things I would say when revisiting this list.

It gets a mention here during Nicol Bolas Week due to the presence of called shot–facilitating Cruel Ultimatum. Yes, Cruel Ultimatum is awesome (if not as awesome as the first-turn kill from classic Bolas in Dallas), basically doing everything that you could ever want to do. It is so awesome, in fact, that for a long while I felt that Five-Color Control mirrors would invariably come down to one guy wrecking the other with Cruel Ultimatum, "the only card that matters" in a sense. 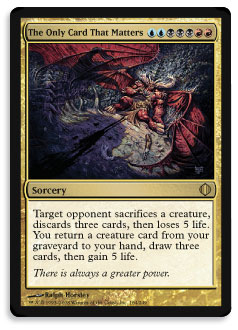 We worked very hard to try to figure out how to get an advantage heads up. First there were Nucklavees to double up; soon after Hindering Lights to deal with it cleverly, later Gutteral Responses to force it through. But it always seemed like the most important and most powerful card in the mirror.

Now look over to Nassif's sideboard: four copies of Scepter of Fugue.

Head-to-head, Scepter of Fugue can knock a Cruel Ultimatum out of the opponent's hand before there's mana to play it. Does this mean that for the upcoming Pro Tour—Shards of Alara Block Constructed, which will include both cards—that we will see a move away from cards like Cruel Ultimatum?

About ten years ago a deck called Ponza became popular in the Midwest, specifically the state of Wisconsin. If you don't know what Ponza is, Randy Buehler used to call it "like Sligh, but with terrible, un-castable, spells." This particular straight red deck basically had a lot of Stone Rains and topped up on a gigantic sweeper like Wildfire.

Here is an example of such a deck, Adrian Sullivan's Top 8 deck from the 1999 Midwest Regionals:

The local popularity of this strategy demanded a different pace for mirror play. Typically in Magic, efficient decks—at least non-combination decks—seek to include cards that they can play right now, that provide immediate utility in a variety of situations. Now imagine you are playing a mono-red deck with a fair amount of lands (some versions as many as 28) heads up against a deck with lots of lands, filled with few ways to win but a bunch of Stone Rains, probably topping up on a card like Wildfire. The interesting thing is that these decks would typically punch each other, devolving into attrition fights where nobody had any immediate way to win, and anyway, the scariest threat that anyone was providing in the short term was probably like a Mogg Fanatic.

A new way of building a deck suddenly appears!

You just want something good that you can topdeck, provided you have the mana to play it. Ponza decks of this era would sometimes run cards like Apocalypse (which could remove a Survival of the Fittest from play), but that would be surprisingly good in a mirror match because the opponent would be playing out all his lands in anticipation of Wildfire. Or they would kill with Lightning Dragon. Provided the opponent didn't steal the game with a well-placed Pillage before you could pay echo, the flapping 5/5 could kill awfully quick-like.

What Nicol Bolas-applicable wisdom can we glean from the Ponza decks of 1999?

Heads up, it might be worthwhile to build a deck with the outlook of topdecking out of the opponent's advantage, of course!

And besides Cruel Ultimatum itself ... what is a more juicy card to topdeck than Nicol Bolas, Planeswalker?

Pretend again (but this time it's easier) ... You are getting donked on the head for a card every turn, starting your third turn. You don't have a heck of a lot of offensive action, and you can't afford to discard lands. Pretty soon you are plum out of cardboard. But you knew the whole way that you had to play lands every turn because the last thing you would want would be to have six lands in play and be force to discard a Cruel Ultimatum. So you have eight down...

And you pull Nicol Bolas, Planeswalker!

You've got Nicol Bolas, Planeswalker in play! Short of drawing a Bolas of his own, or perhaps one of a narrow number of cards that can even target a planeswalker (say an Oblivion Ring), the opponent is probably staring across a pretty cracked mirror.

If we are talking about big and powerful decks with lots of lands, levying haymakers at each other from positions where one or both have no cards in hand, it seems like persistent permanents might be what you want to pull off the top. Of all these Nicol Bolas, Planeswalker seems like one of the biggest and bustiest options. We tend to put a little too much respect in front of an Elspeth or Ajani ... and while if you are playing against a beatdown opponent Ajani Vengeant is going to be worth three or more cards while Elspeth, Knight-Errant is going to generate value while actually sticking around in play, when two ponderous controlling decks (possibly with no cards in hand) meet ... Our theme week's namesake can quite simply stomp on either.

Once you plop down that Bolas, you have officially got the biggest, dumbest monster, and it doesn't matter that you don't have any cards in hand because it's unlikely that your opponent can do anything about it, even if he makes a called shot of a Cruel Ultimatum off the top.

And so ends Top Decks' attempt to marry Nicol Bolas's first Pro Tour appearance with at least one possibility for his next (albeit as a different card, Nicol Bolas, Planeswalker instead of Nicol Bolas) some thirteen years later. If you were cleverly paying attention the whole time you probably noticed that we included Something Old (the Shallow Grave story), as well as Something New (or at least new-ish, with Gabriel Nassif's most recent win using Bolas-flavored Cruel Ultimatums), and Something Borrowed in our inspiration from the Ponza strategy. With the black from the Pox deck to the red from the Avalanche Riders, that leaves Something Blue.

But Nicol has at least one of those covered: