Not Just for Kicks 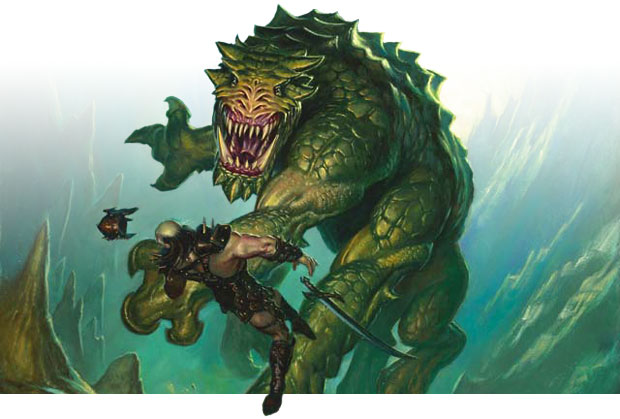 Kavu Titan was a creature that for

was basically a Grizzly Bears ... Kind of what you would expect for

, maybe a little bit lower on the totem pole (even for the time), strictly speaking, than you would typically want for

, but still pregnant with the possibilities of card text.

You see, Kavu Titan was one of the premiere creatures with kicker, which was at the time one of the coolest, most interesting, and most skill-rewarding mechanics of the Invasion block. While Kavu Titan was a Runeclaw Bear on

, it could also be a 5/5 trampling creature for

. I don't know that many players—green mages in particular—would be battering down the gates to the city for a 5/5 for five (even with trample) ... but there you had it, Kavu Titan, one of the coolest showcases of one of the coolest abilities ever to make a comeback in Zendikar.

What made Kavu Titan so cool?

As a billboard for kicker, this one was a really great showcase for the ability. Kickin' Kavu Titan illustrated the extremes of what kicker could provide to a player: On the one hand you had a Runeclaw Bear that basically no one would want to play by itself (just compare to Tarmogoyf), and on the other hand you had a five-mana 5/5 that no one would really ever want to play by itself (just compare that to Baneslayer Angel) ... but when you laced the two potential Kavu Titans together onto one card, with the option of playing either side depending on your needs and opportunities, you got a creature that pleased a lot of people. The flexibility of Kavu Titan allowed it to occupy space on two different points on the mana curve, subtly smoothing out beatdown draws without slowing a deck down with tacked-on library manipulation.

Versatility in the abstract was not all that Kavu Titan was about. Notice how in a long game you could have a relatively dangerous—even evasive—creature ... but in the short game you could apply pressure, and in any unlucky game you could play around mana screw. Not going to hit five mana for your big guy any time soon? That's okay! More okay than usual, anyway .... Instead of what might amount to a virtual mulligan, you at least had the option of a little guy for now.

Kicker was an ability that could make deck design easier, or at least soften some of the choices and address the prejudices of the public. Look at a card like Thornscape Battlemage. Here was a card that could be played in a red-green beatdown deck to help that deck as a companion to Flametongue Kavuor help serve as main-deck artifact removal ... Without the red-green player having to devote main-deck cards to deal with those kinds of permanents. Would anyone have played with Thornscape Battlemage without the kicker option? Heck no! It is a Gray Ogre with a green mana symbol in the top right! But being attached to a guy was enough to elevate this creature to playability.

How about Desolation Angel? 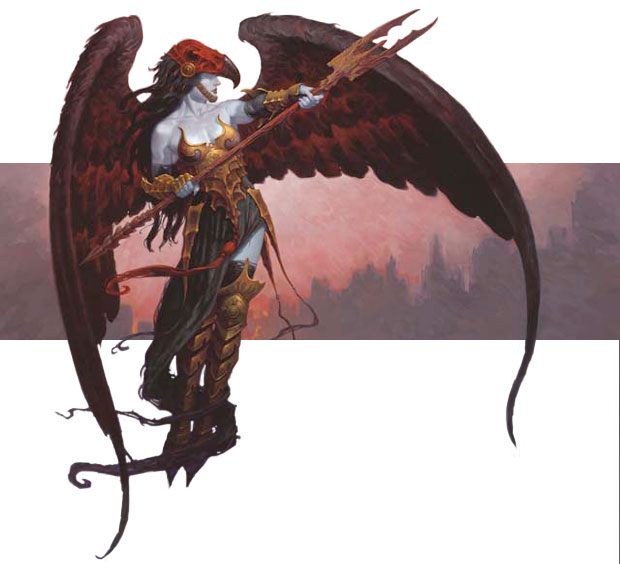 I confess that I have tried to race with Desolation Angel on five mana (one failed attempt), but I figure that is rare. However, on seven mana, Desolation Angel was basically a game-ending flagship. Now this was a really good seven that people would build decks around ... really good decks, in fact, that utterly dominated environments.

Desolation Angel decks wore the opponent down with attrition strategies—two-for-ones, hand destruction, creature suppression, a little card drawing—so that when the Angel deck hit seven mana, the card would resolve, and then break the game to pieces such that the opponent could not come back.

Zendikar brings us a host of new kicker cards; Sphinx of Lost Truths just happens to be one of the most unique. 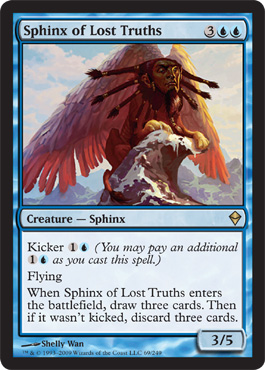 Here is a card that combines some of the things we looked at with the previous kicker set. Sphinx of Lost Truths is versatile; I would put it specifically on being a versatile blocker. This is a card that blue mages will run out on five mana to contain onrushing bears.

They might not be overjoyed to tap out for a 3/5 flyer (without the big potential card advantage payoff), but they will be happy to get a little Merfolk Looter-style value while saving a couple of points of damage and maybe even murdering a monster while allegedly under pressure.

Sphinx of Lost Truths will probably never contend for Desolation Angel's level of format dominance, but as a five-or-seven, I think that it compares reasonably well. Sphinx of Lost Truths is actually much better on five mana than Desolation Angel was, and even if it doesn't win the game immediately on seven mana, giving a blue deck three extra cards at that stage of the game, while helping improve its board position, is basically a disaster anyway. 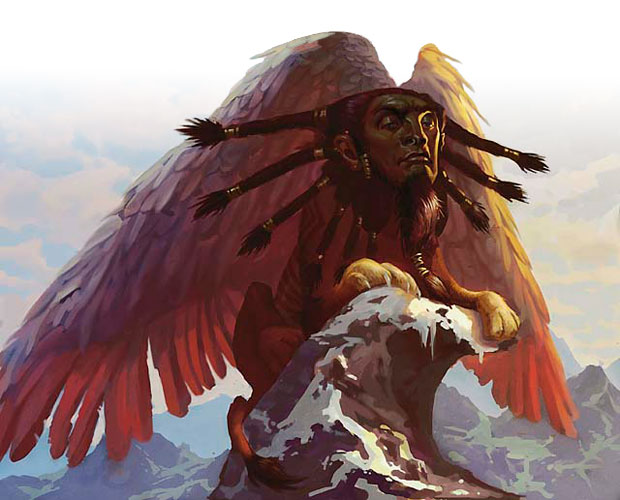 One thing to think about with Sphinx of Lost Truths (versus other kicker cards) is that some ability always triggers when it hits the battlefield. You don't have to pay the kicker to effect some effect .... It's just that the more favorable one costs an extra two mana. So even just on five mana you have a body that is comparable to Air Elemental (which was, believe it or not, once upon a time a proud member of the blue air force) ... but you get to improve your hand along the way. That means that if you reanimate a Sphinx of Lost Truths from the graveyard (possibly discarded via a previous Sphinx of Lost Truths), you draw three cards and discard three cards. It also means that if you combine Sphinx of Lost Truths with any kind of bulk card advantage—even something as seemingly innocuous as an Armillary Sphere—the net effect can be tremendously advantageous, especially at that earlier point on the mana curve.

Sphinx of Lost Truths is actually a little bit bigger, and a little bit more durable, than the Clouded Mirrors we tapped for on turn five. As I said earlier, this Sphinx seems a fine blocker to tap out for ... the kind of card, like a Tendrils of Corruption, that while not generating card advantage, exactly, is building incremental value towards a snowball of a game that will eventually overwhelm the opponent's finite resources. If you get the untap with Sphinx of Lost Truths, it's not going to be like with Meloku the Clouded Mirror, exactly. You aren't going to have the Fireball on the board, the utter disdain for land destruction, the ability to shrug off entire armies. What you will have is a somewhat improved hand. The ability to dig through the top three cards of your library may buy you exactly what you need, in fact, to get you to the next thing ... and that might be your breaker.

Sphinx of Lost Truths might gobble up a two-for-one (while improving your hand of course), but what about what it tosses along the way? Will you be able to turn a profit come turn six? Who is to say that it doesn't dump Sphinx of the Steel Wind into the graveyard, only to be recouped immediately by Sharuum the Hegemon (incidentally yet another Sphinx) right afterward? If you're going to be tapping out instead of leaving your mana open for Counterspells, you might as well mean it.

And as a seven-mana option?

The last several paragraphs were concerned with how a five-mana Sphinx of Lost Truths could help you win an attrition fight, for example by making incremental improvements to your position, dragging down multiple cards, or setting up dramatic follow-up turns. The full-on seven-mana version, on the other hand, will many times just blow an attrition fight wide open! Bam! A Sphinx on seven should be indicative of something we don't really have a name for yet. There is a class of cards that don't win the game automatically, but when they successfully strike, victory very often goes hand-in-hand. Cruel Ultimatum is the most common today, but Primal Command falls under the same umbrella, like Wildfire of old, or even a kicked Desolation Angel. You don't win 100% of the time, but really, how often do you come back from the Primal Command two-for-one?

The fact that one of these spells sticks means, usually means, that the opponent's defenses have been battered beyond helplessness. Most of these cards (certainly Primal Command and Cruel Ultimatum, and now Sphinx of Lost Truths) imply that another threat is imminent—the worst is not over for you. Unless the opponent can completely slough off the Command / Ultimatum / Angel / whatever (like Time Sieve ignoring an Ultimatum, just giving you the bait to tap down seven mana with three Howling Mines on the battlefield), the first big spell usually gives us a hint that a next one, and maybe another after that, are going to come in turn-by-turn succession. There won't be any defense for those, either.

Sphinx of Lost Truths, as a seven, is its own big threat. Not an automatic game winner, no, but big enough that the three cards will usually be enough. Look for this Sphinx to be kicking its way up the standings, whichever the mana cost … provided there’s a post-rotation control deck to put it in, that is.