ow that we have seen the entire Journey into Nyx, there are a few ways to approach the new format.

The first way is to take previous good decks and update them, looking for interesting new additions that fit well into already-proven shells. Bile Blight in Mono-Black was the best example of this from Born of the Gods, and there are plenty of good additions for many of the high-tier decks in Journey into Nyx. I'll certainly do some of that today, because taking a deck we know works and adding new cards is one of the most accurate ways to test new cards. If you make a completely new deck that also has many of the new cards, you are testing both the deck's concept and the new cards at once, and like an experiment where you changed multiple variables, it isn't always clear which one isn't working (if the deck happens to not work). When you take a clear winner and add a few new cards, it's much easier to identify what is effective.

Of course, there are multiple things that we also have to take into account with this approach. The format itself has changed, so you already have a major environmental change to account for, even if you don't change a single card in the deck. While I don't think the fundamental strategy of Mono-Black or Esper is flawed or untenable in this new format, it isn't a given that they are the best way to go, and if they drop in viability it isn't necessarily because of the new cards they are playing, but perhaps what the other decks are now doing in the new format.

The second way to approach the format is to build completely new decks, either based on new cards or by taking existing strategies that have not received the support they needed before. A good example of this is Conley's Dredge deck, which he started testing and playing before Born of the Gods. It had a solid base, but the cards just weren't there to make it awesome. Once Nemesis of Mortals and Satyr Wayfinder were released, that all changed, and his niche deck became much stronger.

Building new decks is also the most fun, and talk of controlled variables and testing environments aside, who doesn't want to play with the new cards? The path to the best decks is littered with decklists that didn't quite make it, so don't be afraid of making decks that end up being bad (I'm certainly not).

First, let me run through some potential updates and interesting cards for the big three decks in the format:

Using the Mono-Black deck that won the last Standard Grand Prix as our base seems appropriate, especially given that it's a very streamlined version. 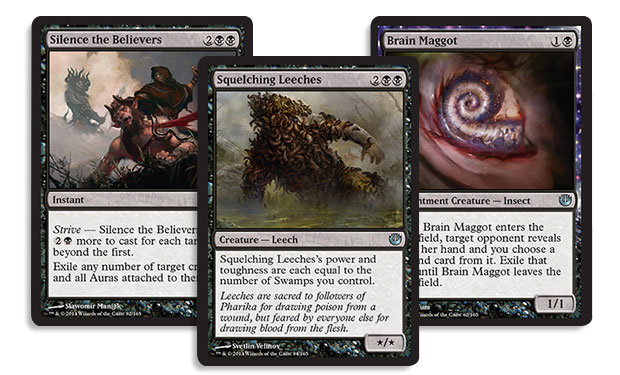 The card I'm most optimistic about is Silence the Believers, as it just seems like an excellent removal spell that also deals with cards like Thassa, God of the Sea, Erebos, God of the Dead, and Athreos. It nicely shores up one of the few weaknesses of Mono-Black, and does so in a way that can even net you some nice card advantage. Silence the Believers can just be slotted in to all the current lists, although I doubt you can afford to play the full four.

Squelching Leeches is a potentially very powerful addition, although it takes a bit more work. I'd still run Mutavaults, but if you are playing four Squelching Leeches, Temples seem out of the question, leading to a mana base of 21 or 22 Swamp plus 4 Mutavault. In exchange, you get a four-cost 4/4 on turn four that becomes a true monster later in the game, which may just be big enough to see play. Temples are an important part of Mono-Black, so this seems like you'd need a specific metagame in mind before making the move (especially because Desecration Demon is already an excellent four-drop), but the Leeches might not suck.

Lastly, Brain Maggot seems like an interesting addition to the discard pantheon. It's less permanent than Duress or Thoughtseize, but it hits more targets than Duress, and in matchups that are removal light it does give you a body as well. Mesmeric Fiend was always a strong card, and I'd definitely keep this in mind.

I'm mainly looking at white additions to Esper, although I did talk about Keranos last week, and he still seems like an interesting direction to go for three-color control.

Banishing Light is a somewhat worse Detention Sphere except for the fact that it can hit opposing Detention Spheres. That's mostly relevant for aggressive decks (like UW Devotion) that care about their permanents being Sphered, but Esper should think about which one to play and at least acknowledge that there is a choice now.

Deicide is the most powerful new card, and it blows Revoke Existence out of the water. Exiling all copies of Thassa, God of the Sea is huge against Mono-Blue, and Deicide still hits Underworld Connections and Courser of Kruphix like before. Instant speed is also a big plus, making it pretty easy to deicide which Disenchant effect is the best right now.

Mono-Blue has ebbed and flowed, but is at high tide right now, and it gets some of the most exciting possibilities from Journey into Nyx. 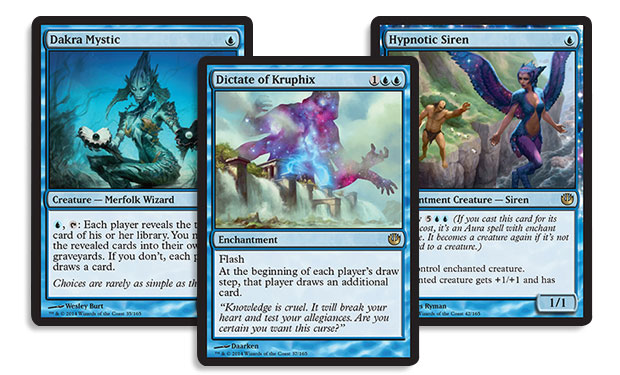 These are all kind of crazy, so I wouldn't be surprised if they didn't fit into the normal scheme of Mono-Blue, but there is definitely some power here.

Dakra Mystic and Dictate of Kruphix are similar in that they are cheap devotion enablers, and both provide a steady stream of cards to both players. Dakra Mystic lets you decide if neither or both players draw, which sets up an uneven exchange, and Dictate just lets both players go nuts. If the blue deck is set up to use its mana more efficiently than the opponent, I could see this Howling Mine-esque strategy work, although Nykthos becomes an important part of it.

Speaking of which, Hypnotic Siren is the card I'm most excited about. It's a 1/1 flier for one, which works well for devotion and with Bident of Thassa. Later in the game, it becomes one of your most powerful cards, stealing anything the opponent has and still giving you a 1/1 once that creature dies. The power level of both halves combined seems high enough to make this at least a two-of in Mono-Blue, and I'd be surprised if trying more wasn't the best way to start initially.

This goes with the full ten one-drop fliers, along with three Bidents, for the Coastal Piracy combo route. Four Hypnotic Sirens means you need cards like Domestication and Rapid Hybridization less, as you have a bunch of Control Magics just waiting in the wings (with wings of their own, no less).

4 Thassa, God of the Sea 4 Nightveil Specter 2 Dictate of Kruphix

This might be a bit ambitious, but the idea of running multiple Nykthos and many Howling Mines, combined with Cyclonic Rift and Thassa's Rebuff, could lead to an explosive and powerful deck. I don't know if you want the rest of the Mono-Blue shell attached, but it seems as good a place to start as any.

Now, on to some brews!

There are two themes going on here, with Eidolon of Blossoms giving you value off enchantments and Ajani giving you value off basically everything. I mainly wanted to make a deck that could ramp out an early Ajani, because Ajani seems awesome, and a lot of the cards I naturally wanted ended up being enchantments. It's possible that dropping the enchantment theme and either making GW Beats (with or without mana accelerators) or a modified Hexproof deck is a better path, but this seems like an enchanting place to start. It is very solidly midrange, which I'm not always a huge fan of, but resilient creatures, many sources of card advantage, and good threats do combine well.

This is a deck that we've seen before, so it's not quite new, but it did get a significant amount of help in this set. Master of the Feast gives it another awesome three-drop, and one with a drawback that is best used by a deck this aggressive. Gnarled Scarhide is even more important, as the deck not only now has twelve creatures with 2 power for one mana, but Scarhide acts as an Unholy Strength and blocker removal, all in one card! That, combined with how powerful Herald of Torment already was, makes this a deck that is about to see more play.

Even after looking at some updates to the current most-popular decks, a new take on green/white, and a newly powered-up mono-black aggro deck, there's still a ton of depth in Journey into Nyx . It's going to take a while for us to really get a sense of what the new format looks like, and even though I'll be building Block decks for the Pro Tour next month, I'm sure thoughts of Standard will be flitting about my head as well!