here's an order to the world of Commander. 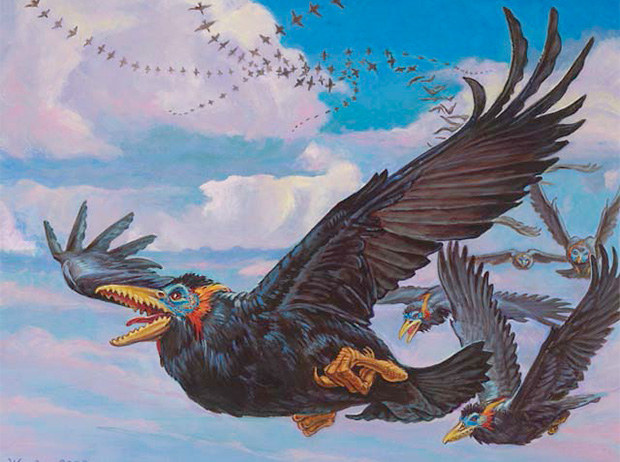 Nearly every game of Commander I've played—in recent memory, at least—involved one of these four cards: 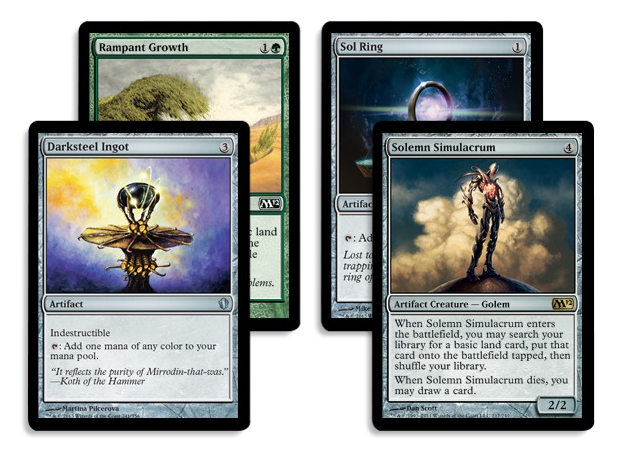 Well, not these exact four cards. These are the flagship versions, the preeminent versions, of four archetypes of mana management:

We could look at all of the sisters, cousins, and other extended relatives of these archetypical cards, but you get the drift of what they each do. The name and details often matter less than the outcome they're used to generate: consistency. There's another word I like to use instead of consistency, though, and its connotation isn't so positive.

Let's be honest: Adding to your mana count, collecting enough of every color you need along the way, is an awesome way to start Commander games. You cast spells easier and earlier. You have more opportunities to act and react with more of the cards in hand. You use and activate extra abilities more often with the extra bits of mana you collect. In general, having enough mana of the colors you want lets you do whatever it is what want to do.

I've created plenty of decks that started with green Rampant Growth cards with a sprinkling of Darksteel Ingot or Solemn Simulacrum types. Building out an impressive curve of mana-setting options meant every game I played felt something like this:

It wasn't that I didn't get to do the things I wanted to do, but that every game played out in the same way. Laying my decks out by their mana cost created a "U" shape: The six-, seven-, and eight-drop slots packed with the most powerful cards available in the colors, with two- and three-drops meant to exclusively get me to the top end as quickly as possible.

It got rather boring, so I decided to change things up.

Mana fixing and land searching still get added to the pile when I'm building a deck, but I've started making a point to find other options that add to the multiplayer experience. While Burning-Tree Shaman and Nekusar, the Mindrazer won't necessarily make me friends, they do force others to think about the things they're doing. Turning off autopilot in the early turns has been much more fun than simply reliving the same opening moves.

Magic isn't chess, after all. Fortunately, there's plenty of variation to explore in the opening turns of games. I'm not the only one who has looked for other ways to spend the early turns. Plenty of others have gravitated toward making moves that matter early on, like Michael.

The obvious answer—at least when using the infamous Kemba, Kha Regent—is "Play my commander, of course!"

The answer is no different for my own version on the theme, which I call "Equip Fuzzy, Get Kitties," a Kemba, Kha Regent Equipment deck with a lifegain twist.

While some commanders are late-game arrivals, some are reliable utility pieces, and others are simply color-enablers, Kemba is a "front-line" Commander, which means she HATES sitting in the command zone. Rather, the sooner Kemba gets onto the battlefield, the happier she is. The real nice thing is that since she only costs three to play right out the gate, and with only one color to worry about, she's probably one of the easier and faster commanders to play, especially for a commander that's just as adept at smashing people's faces in for a commander damage victory as she is playing army builder as a utility piece. She's certainly the easiest and fastest one I have.

This being Kemba, of course, the other thing that this deck wants to happen first is for Equipment to be played so she has plenty of support pieces to trigger off of. The best part is that, with the way Equipment works, even if Kemba gets tucked or otherwise becomes unavailable, the deck isn't completely DOA, since the friends I've included are still capable of going Voltron in her place, should she go AWOL, by taking up her sword. Or shield. Or boots.

It gets especially fun—and it's among my favorite moments when it happens—when I manage to pull off a Voltron with my Darksteel Myr. There's something I find hilarious about a normally unassuming 0/1 Myr turning into this indestructible walking arsenal.

But then, I have a thing for Myr anyway.

Using commanders meant to come down early and go to work is one way to point to the beginning of the game. Rhys the Redeemed is among my favorite commanders of all time, and he leads to decks very similar to Michael's, above. Making tokens and building up into an army that attacks is one of the primal experiences to have in Magic. Commander is no exception.

There are other types of commanders that lead to interesting early action, even if it isn't casting them, as Murphy shared:

For me, the most fun thing to do in the first few turns is help everyone out! You get no better reaction than being the one who plays a Kami of the Crescent into a Rites of Flourishing or Heartbeat of Spring. I was inspired by your Bear Hug article from a few years ago and built this as my first Commander deck, with The Mimeoplasm as the commander.

Even when people know the sharp end of the stick is coming later, they can't help but be friendly to you until that happens. Overall, I've had more rewarding games (for the whole group) playing this deck than any other.

Using cards that help other players while helping yourself is a great way to do something different early and set up a late-game payoff. Playing to politics may not be everyone's cup of tea, and Westin's approach to setting up later turns isn't about every else:

A lot of Commander games can go into the realm of lasting a couple hours, especially when everyone is trying to set up their combos or armies in tricky and snail-paced ways that Commander is wont. But it doesn't matter if you're not doing enough in the early game to defend your plans.

My early game consists of getting in a couple sources of protection for my commander, Kaalia of the Vast. With a deck style full of big sticks that are a minimum of five mana, I usually won't have any creatures out before I get out my commander, so keeping her alive is of utmost importance.

Equipment like Sword of Feast and Famine or Haunted Plate Mail (which sadly recently left the deck for a Sword of War and Peace) are often viewed as great pieces to beat face with or finish off opponents. But when you have a commander as threatening and fragile as Kaalia, they turn into early-game insurance plans for keeping the key to my deck alive.

Enchantments are a big help in Commander when multiple players can either benefit or be held back by a few cards. Basic anthem effects like Spear of Heliod or Dictate of Heliod are of great help in the deck, but particularly shine in keeping my Kaalia from dying early on to a very hilarious Lightning Bolt.

One card that really stands out to me as helpful and underrated is Legion's Initiative. The anthem effect is helpful, but it's really good for its bounce effect. Not only can this help avoid wraths or removal effects, but this can also give you a big hasty finishing move when you need it. I think more RW creature decks need this card.

Kaalia of the Vast costs enough to come down early but benefits from the groundwork other early plays make. It isn't just Equipment like the powerful Sword of Feast and Famine that can work out well. One of my favorite new cards is the humble Journey into Nyx uncommon Chariot of Victory. First strike, trample, and haste are all fine abilities is a world of oversized creatures, but equipping all three for the bargain price of

It certainly doesn't scare anyone like a Sword normally would. Another way to set up a bigger game without scaring everyone is to play creatures that point others elsewhere, as Mike does:

I like to get a credible defense on the board as soon as possible. Being the last person to put a creature down is usually an invitation to unnecessary pain early in the game. Deathtouch + reach make a great deterrent to opportunistic attacks, so Deadly Recluse and Thornweald Archer see a lot of play in my green-heavy decks.

With an expensive, tricolor commander like Vorosh, the Hunter, I also spend early turns to prepare for his arrival and maximize his time on the board. Vorel of the Hull Clade; Corpsejack Menace; Master Biomancer; and Thassa, God of the Sea are the typical targets for creature tutors, while Doubling Season, Evolution Vat, and (now) Solidarity of Heroes gets fetched with the noncreature tutors.

With friends like these, it's no wonder Vorosh, the Hunter thrives in Mike's hands.

Ultimately, what you choose to do in the early turns—mana management, battlefield entrenchment, political puzzling, or something else entirely—is up to you. But if you find games are playing out the same way each time and your deck doesn't feel exciting or fresh, it may be time to try different cards in the early turns.

This week's question pivots from the idea of doing something different in the early turns, though it's a deep topic all its own: What are your favorite "spell creatures"—creatures that come attached to a spell-like ability?

There are many ways to consider what, exactly, a "spell creature" is, but typically they're creatures that give you a trigger when cast or entering the battlefield. Artisan of Kozilek, Wood Elves, and Ixidron are all examples of spell creatures, but the definition is certainly fuzzier than what these three share in common. I want to know which you like to use, and why.

Join us next week when we fill our spellbooks with creatures from across the multiverse. See you then!