elcome back to Perilous Research, DailyMTG.com's exclusive Magic Online column. Today, we're going to discuss the ubiquitous Black-Red deck in an attempt to find its weaknesses. When Return to Ravnica first entered the fray of Standard, we saw a flurry of aggressive Zombie decks gain footing as the deck to beat. Midrange Jund decks quickly put those decks in their place. Out of those ashes rose three-, four-, and five-color Unburial Rites decks that abused Angel of Serenity. These reanimation strategies quickly found themselves outmatched by Bant Control and four- and five-color control brews with many Planeswalkers. These hard control decks remained top dog for a few weeks until Adam Prosak and Gerry Thompson introduced the world to White-Blue Flash, a deck that performed exceptionally well against Bant Control in its original state. And so began the era of Black-Red Midrange. Almost identical versions of Black-Red won both Grand Prix Charleston and Grand Prix San Antonio. 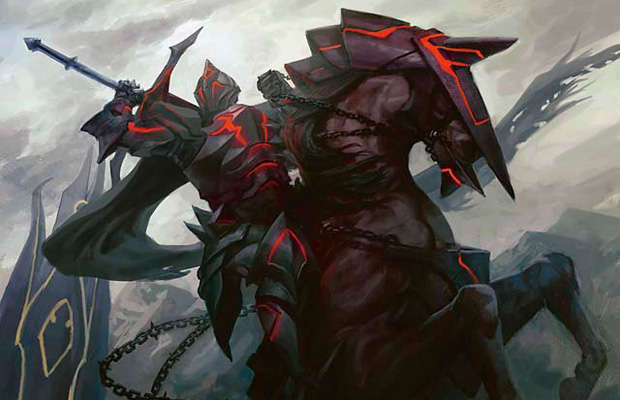 Black-Red Midrange decks weren't just winning Grand Prix. Magic Online was quickly inundated with the strategy and the deck began winning most Premier Events and posting 4–0 or 3–1 finishes with some level of consistency in the Daily Events. The deck seems to be very difficult to push out of the metagame. Let's take a look at one of the most recent Black-Red lists and discuss its strengths and weaknesses in the current Standard environment.

Why is this deck so menacing? The deck operates optimally at virtually every stage of the game: 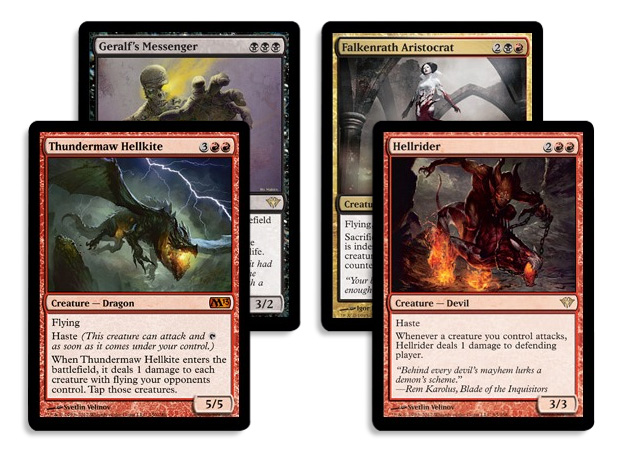 The Aggressive Route to Victory Against Black-Red

So, where's the weakness? A quick look at the creature base in the Black-Red deck paints a very clear picture of the deck's major weakness. Diregraf Ghoul, Geralf's Messenger, and Gravecrawler are all terrible on defense. These creatures either enter the battlefield tapped or can't block at all. As a result, many players have decided they can beat Black-Red by going underneath. The Black-Red deck will often stumble a bit in the early turns because it plays so many high-end cards. By applying extremely aggressive pressure in the earliest turns of the game you can put the Black-Red deck on its heels, force it off its aggressive midgame, and close the game with some type of reach. The deck that accomplishes this goal with the most consistency has proven itself to be Red:

It seems like yesterday that decks with Centaur Healer and Thragtusk were running amok in this format. Just a few weeks later, we've found ourselves in a surreal position, talking about Red's rise to tier one. Red decks have outperformed every other archetype in the most recent Daily Events. The deck is extremely straightforward: the goal is to kill the opponent before he or she takes over the game with big spells. The Black-Red Midrange deck has no choice but to trade blows with the Red deck and the Red deck is usually a full turn faster, giving it a huge edge in the matchup.

Red is surprisingly resilient given the current Standard environment, but the deck still struggles against cards like Thragtusk and Centaur Healer. Red is currently the biggest gamble in Standard. The deck performs very well against some of the most top-end control decks, Green-White and Black-Red. Unfortunately, there are a lot of archetypes in between that play Centaur Healer, Restoration Angel, Thragtusk, and Huntmaster of the Fells. Decks that feature these cards are going to give the Red deck huge problems and there isn't much the Red deck can do about them unless it wants to go over the top by playing four copies of Thundermaw Hellkite, which isn't even an option unless you want to sideboard in additional lands. 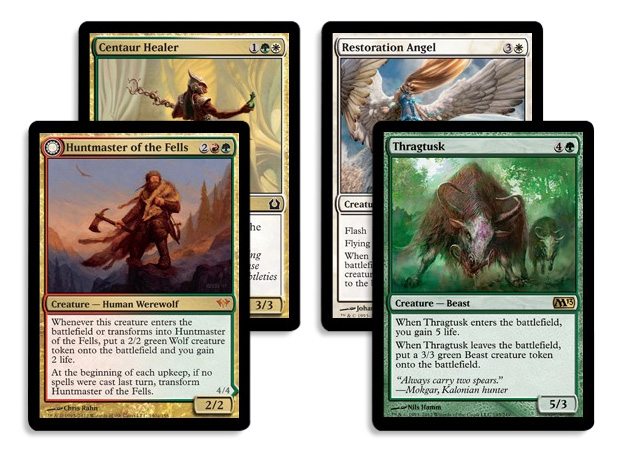 Red is an excellent choice if you expect the right metagame, but the archetype has some very clear weaknesses and can often put you in the position of having an unwinnable matchup.

Charging up the Middle Against Black-Red!

Being more aggressive is definitely the best plan against Black-Red, but that strategy's weaknesses may outweigh its strengths in the long term, as the format diversifies itself again. There are a number of midrange decks that do reasonably well against Black-Red Midrange while still putting up game against the rest of the format. Remember, Black-Red Midrange is very similar to the decks from the earliest stages of Return to Ravnica Standard.

The original Gravecrawler decks fell out of favor when Jund Midrange became the dominant strategy. Jund Midrange still sees some scattered success on Magic Online. The numbers are getting better and it's quickly becoming quite clear that Jund Midrange is a bit of a favorite against Black-Red Midrange. The deck has many angles of attack and disruption:

3 Rakdos Keyrune 2 Liliana of the Veil

Once the dust settles, I expect Jund Midrange to be considered tier one for quite some time. The deck slaughters any deck that wants to win with creatures. The one weakness here is Sphinx's Revelation. The big mythic rare instant from Return to Ravnica can undo a lot of what this deck is working for and the deck doesn't have the aggressive route to victory that can go underneath the top end of the Bant Control decks. For this reason, Jund Midrange is forced to rely on Slaughter Games after sideboarding in an attempt to strip the opponent of any Sphinx's Revelations. Tapping out on the third or fourth turn to do something that doesn't affect the board isn't exactly what you want to be doing against the Bant Control decks, but at this point there doesn't seem to be a better option.

The tools are available to a player who wants to beat creatures, and some players have gone so far that they're leaning on the interaction between Nightshade Peddler and Izzet Staticaster. This type of strategy is strong against most Standard strategies, but can often find itself outmatched by Angel of Serenity:

4 Pillar of Flame 3 Bonfire of the Damned

This deck leans heavily on Nightshade Peddler and its absurdly strong interaction with Olivia Voldaren and Izzet Staticaster. The deck plays enough cheap spot removal to survive the early onslaught from Gravecrawler, Diregraf Ghoul, and Knight of Infamy. Once the midgame rolls around, the deck should have created some menacing presence with Nightshade Peddler that threatens to take over the game. Black-Red opponents will be forced to pick apart this combo before they start playing their top-end threats. Meanwhile, this deck is advancing its board state and gaining life with Huntmaster of the Fells and Thragtusk. 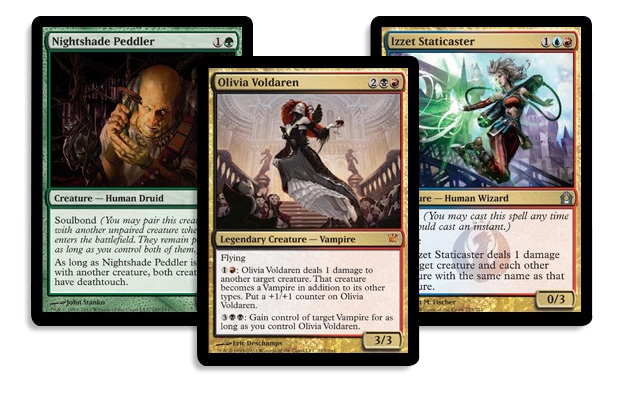 I've heard a lot of players argue against the consistency of Nightshade Peddler strategies, but the lists seem pretty consistent to me and I think this is a good approach to the format as long as we're seeing White-Blue Flash, Green-White Aggro, and a bunch of midrange decks.

Over the Top of Black-Red

As we've previously discussed, it's extremely difficult to fight Black-Red with answers because so much of the deck ends up whittling away the game via haste and damage triggers. Recently, we've seen a new breed of control deck consistently doing well in Daily Events and just beginning to poke it's head into the Top 8 of Premier Events.

The Five-Color Control deck may seem like it's a disaster against Black-Red Aggro. Surprisingly, the deck performs much better than White-Blue Flash or Bant Control when trying to beat Black-Red. The matchup isn't necessarily good, but it's not quite as bad as Bant Control in this matchup, either. Two players with reasonable draws will probably find themselves in skill-testing matches that are usually won by the tightest pilot. However, if Five-Color draws multiple Lingering Souls and the Black-Red deck is able to find a timely Thundermaw Hellkite, the game may end out of nowhere. Here's a recent list:

1 Gisela, Blade of Goldnight 1 Griselbrand 4 Huntmaster of the Fells 4 Thragtusk

Ramping into Huntmaster of the Fells and Thragtusk gives this deck the strength it needs against early aggression. Once this deck makes its way into the midgame, it continues to develop its mana while controlling the board with sweeping effects like Terminus and Supreme Verdict while it establishes dominance via Curse of Death's Hold, Lingering Souls, and Planeswalkers. The top end is the deck's strongest asset against Black-Red. Gisela, Blade of Goldnight or Griselbrand are both enough to punish opponents for trying to squeak in a few points and can usually win the game on their own. 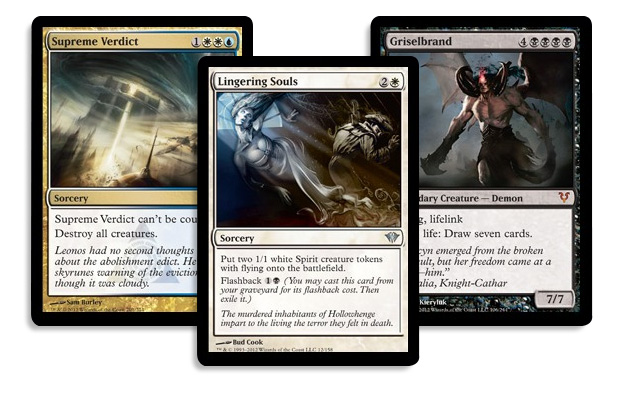 I really like this deck because of how strong it is against the control decks while still maintaining a reasonable matchup against the aggro decks. The deck struggles with the speed of Mono-Red, but that deck will likely fall out of favor when Centaur Healers and Thragtusks become the flavor of the week again.

Black-Red may be the deck to beat right now, but there are many paths to victory against the current best deck in the format. Magic Online gives us a unique insight into the future progression of the format and lets us know which decks have been rewarded by Black-Red's popularity.

Be sure to check in next week for the monthly installment of the Standard Deck Compendium. We've seen a lot of new decks this month and we've watched older archetypes change in the process. I'll be here to analyze the past, present, and future using Magic Online.