elcome to Perilous Research, DailyMTG.com's exclusive Magic Online column. Last weekend, 329 of the best Magic players in the world descended upon Montreal for Pro Tour Gatecrash . The tournament was spectacular and the coverage was excellent. Be sure to check it out if you didn't have a chance to follow along with the action over the weekend. Playing on the Pro Tour is a goal of many, if not all, competitive Magic players. Making it to the Sunday stage at a Pro Tour is a dream for the game's most dedicated students. 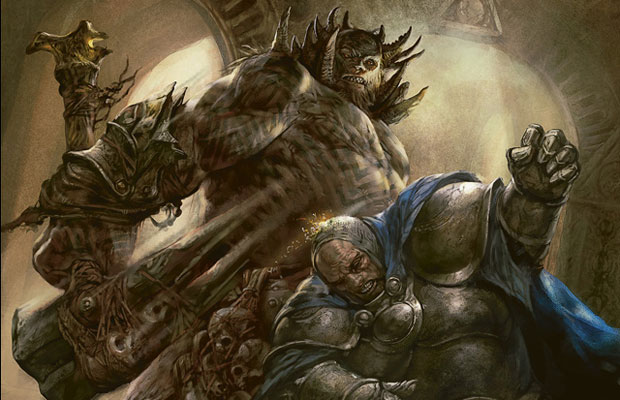 Making it onto the Pro Tour is no easy task. You need to play more than everyone else. Making an effort to attend and battle in every possible PTQ increases your chances dramatically. Playing in a lot of PTQs used to be difficult for some players in more remote geographical locations, but the advent of Magic Online PTQs has done a great deal to level the playing field and give everyone the opportunity to play for a qualification multiple times in a season. The most important thing, however, is having a strong knowledge of the current metagame. This is especially true during a Constructed PTQ season. Currently, the Modern PTQ season is in full swing. A lot of players are unsure of the format's state after the banning of Bloodbraid Elf. Today, I'm going to take a look at the most successful Modern decks from last weekend's Daily events and give brief descriptions of the archetypes and explanations of some of their dirtier tricks. Armed with this knowledge, you should be prepared to battle in this weekend's PTQs.

Tron strategies (decks with Urza's Mine, Urza's Tower, and Urza's Power Plant) have established themselves as the new top dogs of the format. These decks often suffer against combo strategies, but combo has slowed down a great deal and the Tron decks are often well-equipped to deal with a turn-four or five combo deck depending on whether or not they're on the play or draw. We may see combo decks speed up a bit in the coming weeks, but right now the format seems to have reached a bit of a lull in terms of evolution. Let's take a look at some decklists!

Red-Green Tron has been a part of the Modern metagame ever since Charles Gindy won a PTQ with it in one of last year's PTQs. The deck fell back into obscurity until Grand Prix Chicago, where it made a Top 8 appearance. The deck can feel unbeatable when it draws well and the fact that it produces a turn-three Karn Liberated in a reasonable portion of its games makes it a difficult hurdle for a lot of potential decks in the format. The deck enjoys a strong Jund matchup and that seems to be its biggest selling point. Wurmcoil Engine gives Jund players fits and there isn't really a better card against Jund, especially when it comes down on turn three. The deck suffers against combo strategies that can ignore its interactive elements and win the game before a Wurmcoil Engine starts chugging along in the red zone, especially in Game 1.

After sideboarding, the deck gains a number of ways to interact with combo and aggressive/combo decks like Robots. If you're not playing combo and you want to have a chance against this deck, I recommend playing cards like Molten Rain or Negate. Land destruction is strong against the deck for obvious reasons. Hard counterspells are often good against the deck because it will often keep hands with only one or two big spells; cards like Mana Leak or Spell Pierce can easily be outclassed by Tron because the savvy Tron player will simply wait a turn, play another Tron piece, and be able to pay the mana. This will likely continue to be a tier-one strategy and it would greatly benefit you to learn its ins and outs if you're looking for a chance to qualify for the Pro Tour.

A lot of Chicken Littles bemoaned the death of Jund after Bloodbraid Elf was banned from Modern, but the deck still puts up some of the best numbers in the format. Deathrite Shaman and a healthy dose of spot removal and pinpoint discard make Jund have no true answer. Cards like Wurmcoil Engine are exceptional against Jund, but it's often difficult to dodge Thoughtseize. The lack of Bloodbraid Elf means that more decks will be able to go toe-to-toe with Jund in an attrition war. Jund also suffers against Burn strategies than can ignore the all-encompassing interactive elements of Jund and aim everything straight at the dome. This list is the latest in the Jund evolution chain and should be the list you're testing against for this weekend's events.

Raka Tempo was given a bit of breathing room when Bloodbraid Elf was banned, and it seems to be establishing itself as a tier-one archetype. The deck, like Jund, can perform well in any matchup. When playing this deck it's important to kill Deathrite Shaman immediately. The deck can get outclassed if the opponent accelerates his or her mana and the ability to void Snapcaster Mage's trigger is often game-changing.

Cards like Combust can come in against this deck and they also serve double duty against Splinter Twin strategies. This should be a winnable matchup for most decks if played correctly, but it's not a deck you can ever feel particularly good about playing against.

Kiki-Jiki, Mirror Breaker Pod is one of the more interesting decks in the current Modern format. The deck plays like a midrange creature deck, but it can often threaten to kill the opponent out of nowhere when he or she taps out. This makes the deck extremely difficult to play against in the midgame. The deck is extremely resource-dependent and it has dramatically more options when it has more creatures on the table. I recommend being aggressive with your removal in this matchup. It may seem counter-intuitive to be tossing Terminates at anything you see when the deck needs specific creatures in order to win, but keeping your opponent's board clear will stifle his or her development and give you an opportunity to win while your opponent struggles to make it back into the game. If you aren't aggressive with removal you'll be forced to leave mana open while your opponent continues developing and the passive advantage he or she gets off Pod activations will give your opponent a huge chance at victory.

Tribal Zoo is one of the better aggressive options in the current Modern format. Burn decks suffer greatly from all the Leyline of Sanctity that people have begun to play, but this creature-based aggro deck can simply use burn as removal and win the game with creatures. Beating this deck is similar to beating Zoo decks from any format. A lot of cheap removal, some mass removal, and a few Kitchen Finks will make this into a good matchup for most strategies. However, a mulligan or a hand with a hiccup will often get run over by the Zoo deck.

Splinter Twin is still the format's favorite combo deck. The deck wins by using either Splinter Twin or Kiki-Jiki, Mirror Breaker with Deceiver Exarch or Pestermite to make an arbitrarily large number of creatures and attack for millions of damage. Players often have a lot of sideboard hate for this strategy because of how popular it has become. In an effort to beat the hate, Splinter Twin players in the know have included a Gifts Ungiven package in their sideboards that lets them turn into a Reanimator deck in Games 2 or 3. This makes the deck more difficult to sideboard against for most strategies; you often won't know which combo you need to beat and Iona just flat out beats many decks in the format. If your deck is cold to Blood Moon you can usually be certain your opponent won't bring in the Gifts package, but decks that are primarily red or include a lot of basics should be prepared to deal with Unburial Rites in Games 2 and 3.

Burn is still a thing and it's actually better than ever right now. Boros Charm gave this deck a huge boost in power level and Skullcrack helps the deck perform optimally even through Kitchen Finks or Huntmaster of the Fells. Lifegain is still good against them and Leyline of Sanctity is often all you need. The white splash for Boros Charm lets the deck bring in Lightning Helix when it's forced into a race or Erase when it sees Leylines. Be prepared for these cards if your Burn opponent has white in his or her deck.

Mono-Blue Tron isn't something I expected to see. The deck has always had strong potential, but the combo nature of Modern has kept this deck on the shelves for quite awhile. Combo isn't particularly popular right now, so it makes sense that a deck like this could perform well. I haven't had the chance to play with or against this deck, but I'd treat the matchup similarly to the Red-Green Tron matchup. The one major difference here is that countermagic isn't very strong against Blue Tron. If you pass the turn with countermagic open the Blue Tron player is likely to just play more land and develop (better than you) instead of going for a big spell. He or she has the option of countering your spells and playing cards as follow ups. Spell Burst can lock the game up if things get late enough, so it's probably worthwhile to try for some early aggression. Remember that you don't have to play around Pyroclasm!