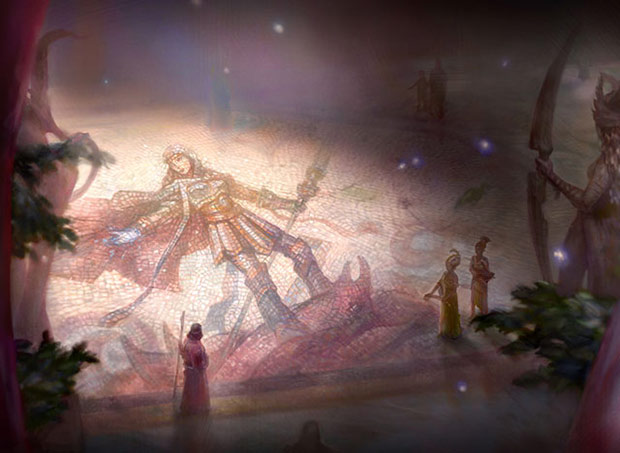 Journey into Nyx is being debuted, and all eyes will be looking forward to what the next day brings. Checking out the newest preview is why you're here, right, other than your passionate love for Commander? 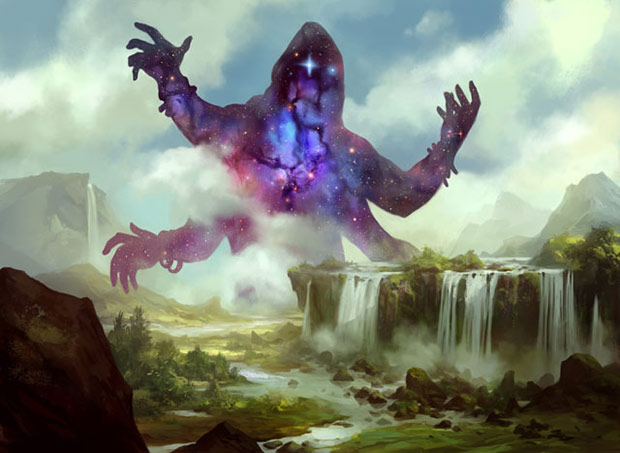 From both Theros and Born of the Gods, the option to choose an indestructible enchantment creature as your commander has been possible. Each God brings something powerful to the battlefield, providing raw power, build-around-me potential, or both. Being Godly is something I've even jumped on board with, leading up to a devilishly destructive Mogis, God of Slaughter deck I really enjoy playing (and losing with).

Going to a God is often an adventure with power. While we're not exactly becoming divine like Xenagos did, tapping into the pantheon of Theros flexes Commander muscle in a serious way: Indestructible, beefy, repeatable creatures and enchantments have a way of dominating games. 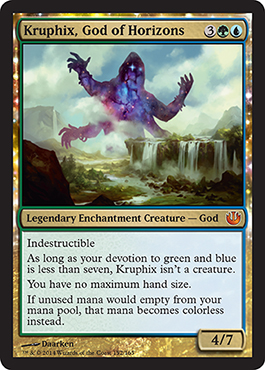 You're either going to love or hate this god among Gods.

The Power Cosmic (and Inscrutable)

Why do I make such a bold claim about the God of Horizons?

There are two things almost every Commander player I've met loves: having cards and having plenty of mana. Kruphix lets you have the cake and eat it too. There have been similar effects before in Magic, such as Omnath, Locus of Mana and Venser's Journal, but tying them together is approaching Omniscience in feeling: Keep all your spare mana, then use it to cast whatever you want.

Does that sound dangerous?


Well, it is. That's why I think this God is something special, and powerful. Last week's question was a call to catch up with things that might fit with Kruphix, God of Horizons in Commander. Thanks to Twitter, many of you supplied the goods.

Omnath, Locus of Mana is definitely the forerunner of "Save up mana. Do awesome things." for Commander. While Kruphix is going to lead to other paths—as adding blue mana changes the equation completely—starting with the things that set Omnath apart from the pack is a good start. Bill's take on the mean, green, mana machine is typical of the choices:

Here is my decklist for the fun things to do with a ton of mana.

This deck works on getting Omnath, Locus of Mana out as quickly as possible and letting him build up large amounts of mana. This is sped up by cards like Mana Reflection and Doubling Cube. When Omnath is nice and big I like to equip him with Loxodon Warhammer and trample through for commander damage, cast most of my deck with Genesis Wave, make very large Hydras, or cast Gelatinous Genesis for around 1,000. It is also fun to use the Spawnsire of Ulamog's ability to cast all the Eldrazi from the sideboard at once.

Sideboard
1 Artisan of Kozilek
1 Hand of Emrakul
1 It That Betrays
1 Kozilek, Butcher of Truth
1 Pathrazer of Ulamog
1 Ulamog's Crusher
1 Ulamog, the Infinite Gyre


Helix Pinnacle and Call of the Wild look like great places to spend a little extra mana. With the right type of deck, say one where Maelstrom Wanderer is the Commander and the deck is full of creatures, these two spells can turn bonus mana into clocks opponents can't expect.


Steel Hellkite and Rocket Launcher are from different eras of Magic, but the potential to put a pile of colorless mana to use can mean destroying instead of creating. Steel Hellkite, in particular, is a utility card in its own right, helping colorless and artifact-heavy decks carry answers to problems.

Ray built a Karn, Silver Golem deck that, with a little imagination and reengineering, could put Kruphix to good effect:

Colorless mana, you say? Lots of colorless mana? Sure, you could do something like put a ton of counters on Helix Pinnacle, but anyone could do that with just a simple Forest and 100 turns. No, I like to use my colorless mana to do crazy things... like make gigantic Chimeric Masses or huge Shifting Walls. With this deck, however, my favorite thing to do is exile all my opponents' permanents, and their hands. Here's the deck.

The key to the combo is to use commander Karn to turn any of the artifacts that tap for three or more mana into a creature. Tap that artifact, use Voltaic Construct to untap, rinse, repeat. Then you turn your Obelisk of Undoing into a creature, play Karn Liberated, use him, bounce him, untap the Obelisk, rinse, repeat. Any friends you used to have most likely rage quit by this point.


While Comet Storm means Kruphix, God of Horizons isn't the commander, the power to expand spells further or repeat them consistently delights the potential of those who love to build wild decks. Riku of Two Reflections is a powerful commander, and throwing Kruphix into this combo-card creation sounds just like what the doctor ordered for Joe:

That's right. This combo requires at the least five cards to pull off and a whopping amount of mana to go infinite. The cards required are:

The way it works is this:

What happens is Rite of Replication will create five copies of every creature in play, which includes your lands, thanks to Rude Awakening. With a haste enabler, to push the whole thing up to six cards (like Fires of Yavimaya), you've got an army that can't be stopped!

Here's the decklist. The commander is Riku of Two Reflections.

Decks built around combinations of three, four, or more cards will find Kruphix to be a powerful addition: You keep all the cards you draw! With blue to help draw your way to whatever you want, and Kruphix also letting you stock up mana, decks like Marek's Phelddagrif deck become even more possible:

After reading your article, I decided to rebuild my Phelddagrif deck!

I used one of the most funny and unexpected combos there. The main combo just needs three cards, but then it won't do much! The fourth card could be any card providing creatures to opponents. So my Phelddagrif really does his part!

The combo itself is quite easy:

If not: You are still there with plenty Bombshells yourself, all 4/1 and ready to kill the last survivor.

The other cards in the deck are just there to provide the combo: Vedalken Orrery allows us to plan ahead with entering Bronze Bombshell at the end of an opponent's turn. Or sneaking an Exchange when no one would think of it (right before a Wrath...).

Hinder, Dissipate, and others are just for the protection of the combo. I don't care about damage or something like that.

Mystical Tutor, Brainstorm, and others allow me to set up the combo early. Tempt with Discovery, Fertilid, Kodama's Reach, Recross the Paths —they all help me get more and more mana, since the combo costs a lot!

Finally, Sage's Knowledge, Relearn, Regrowth, and others help me get back whatever combo piece went missing.

Very fun to play and even able to win.

Kruphix, God of Horizons isn't exciting just for what he does, but what he allows you to do... if you can keep his power in check long enough for opponents to let you pull it off.

Kruphix, God of Horizons is one of the last in the pantheon of Theros to be revealed, but I have a feeling it's far from the last time we'll see him around the Commander tables.

This week's question is an ability that isn't for the faint of heart: What are your favorite sacrifice effects for creatures in Commander?

Whether it's an ability on an permanent, a cost for playing a spell, or a creature that self-implodes for value, some of you are true connoisseurs of converting critters into something else. I want to know what you choose to use.

Join us next week when we get a declaration from a God. See you then!