here's one card type I love the most in Commander. You might think it's the titular leaders, creature cards, but you'd be wrong. For me, Commander isn't even about spells I cast but the means I get to casting them. 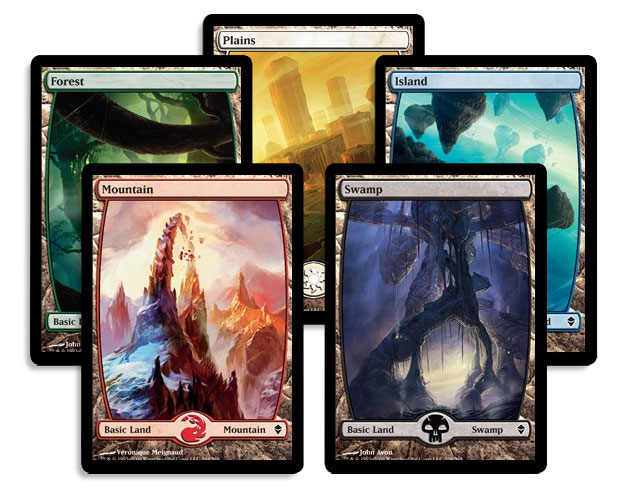 Lands are, in my humble opinion, among the most critical elements of Commander decks. While there are plenty of other permanents that can pull mana along, such as Gilded Lotus and Crypt Ghast, the benefit of playing a land each of your turns is fundamentally more powerful. They're harder to remove from the battlefield, can't be countered or easily stolen by opponents, and often carry abilities that give them more depth than basic mana production.

Of course, I'm not alone in these thoughts. Many of you took the question of naming lands to include in any Commander deck to heart, finding plenty of options to consider.

Several of you cleverly pointed out that the most essential lands for Commander are the basic lands themselves. Aric explained this in detail:

1–5. Basics—Any deck with color in it should have basic lands. Period. Even a 5-color deck benefits greatly from having even 5–10 of them in the 99. Too many effects fetch them and filter for them for them to be ignored. In fact, the only regret I have about my Karn, Silver Golem deck is that Barry's Land doesn't exist to fetch with Solemn Simulacrum, Evolving Wilds/Terramorphic Expanse, and Pilgrim's Eye. And don't forget getting blown out by Path to Exile!
6. Command Tower—Clearly the greatest color fixing in Commander.

Among the "too many effects" Aric didn't mention are Wayfarer's Bauble and Journeyer's Kite, Chartooth Cougar and Absorb Vis, Rampant Growth and its entire extended family, and Land Tax. The "basic" qualifier for many land-fetching effects is an upside matched by the fact basic lands naturally enter the battlefield untapped.

Command Tower (Hey!) is a card we'll get to later, but the idea of using a suggestion slot to cover a cycle of lands was common too. Aric's honorary mention of the filter lands keys into how many of the lands in Magic are only a slice of a larger pie. Filter lands, such as Graven Cairns, are handy because they take either colored input to output up to double of either color. When you want to cast Ground Assault and Groundbreaker in the same deck, it's obvious why filtering mana like that is handy.

As a preface to my actual list, I'd just like to say... I don't know if you realize just what a Herculean task you set before us, but it's really, really, really hard to pick the six "most useful lands" for "a Commander deck" out of the 472 lands printed over the last twenty years and then explain in 100 words. Still, it is possible... sort of. I'm going to cheat here and talk about land cycles in some cases, since not every Commander deck will like all the cards in any particular cycle.

I'm aware the responses are challenging to cover (That's part of the secret in making those featured so good!) but I think you covered several key points. Karoos, or bounce lands, are most famously from our original trip to Ravnica, although there's also a monocolored series from Visions. The advantage to these lands, in addition to what Mark pointed out, is that a land that produces two mana works like getting to play two lands. It takes three land plays to put Karoo and a Plains onto the battlefield, but you get a full three mana from it all. Getting an "extra land" in the mix helps smooth out a turn when you don't otherwise have a land handy.

Similarly smoothing but for the opposite reason, lands with cycling give you something to do with a land if you don't otherwise want to play one. It's totally fine to put one down early in the game when you want to hit every land you can, and both cycles of cycling lands can fit into multiple Commander decks, unlike Ravnica's Karoos.

Of course, cutting straight to lands that produce any color is one way to make mana easier for any deck. Command Tower is the pinnacle of multicolor mana options, giving us a land that works in decks with commanders of any number of colors. Predecessors like Reflecting Pool, Rainbow Vale, and Forbidden Orchard all have qualifiers that can do different things to games, but each are options you should consider.

There are plenty of cycles remaining, however, such as in Samuel's picks:

Where Samuel's choices diverge is the split between cycles—which we've covered thoroughly now, but if you want more, there's plenty more to look at, including all the varieties of lands that produce two colors—and utility lands: lands that have abilities aside from making mana.

Urborg, Tomb of Yawgmoth is almost always paired with Cabal Coffers or Crypt Ghast effects, and it's a common way for Exsanguinate or Debt to the Deathless to wipe out a full table of players. These aren't utilities per se, but they certainly are abilities beyond usual. Bojuka Bog is closer to what many of you meant by lands with abilities, as getting a handy spell-like effect from the same place you get your mana.

Colin's picks are a who's who among utility lands:

Fun fact: they all tap for mana. It's important.

So Colin slipped one more set of cycles in, but man-lands—lands that can become creatures—are definitely a utility. Since lands by themselves often survive longer than creatures, having one that converts between the two types can bypass waves of Supreme Verdicts and Merciless Evictions.

Lands come with plenty more abilities tacked on: Spellbook, Overmaster, Twiddle (or Hidden Strings) for other lands, and even a way to get rid of a creature you control almost anytime are all excellent tools to have around. John had even more to point out:

To answer your question, I want to name colorless, color-independent lands—lands I could and would run in any Commander deck.

Thespian's Stage, and its predecessor Vesuva, can copy any other land floating about. While cleverly copying legendary lands is something you should look out for (see the changes coming to the rules with Magic 2014), copying itself is a utility with amazing flexibility. Doubling up on Deserted Temple or Boros Garrison is a quick way to leap your mana forward, but having another Command Tower can be deceptively strong.

While Buried Ruin is a one-shot effect, the repeatable nature of Rogue's Passage isn't something to take lightly. It takes just three hits from Ruhan of the Fomori to fall, and when he cannot be blocked it doesn't matter that the attacks are random. Despite looking at colorless options so far, utility lands that require color can be just as handy, as Jesse points out:

Okay, Jesse included more colorless lands, but it's the colorful ones that strike me here. Llanowar Reborn feels goofy, but it finds surprising use by hiding a +1/+1 counter on itself until the last minute. Halimar Depths is a card I'm fond of in my Pauper Cube, and I can vouch for the utility of massaging the top few cards of your library. Maze of Ith was the inspiration for Mystifying Maze, and Dust Bowl is the version of Strip Mine or Wasteland I prefer. Handling other player's utility lands is something to keep in mind, as Derrick says:

These are the six nonbasic lands I think impact Commander most and that any deck can play regardless of color:

Another land that produces any color of mana, another land that fetches up more lands, and another color utility land that grants a repeatable spell-like effect. There's a familiar theme here, but the explanation for Strip Mine is clear: It isn't about stopping everything, just that which is wrecking the game you're in. If you want to be stylish and polite, Ghost Quarter stops the annoying land while giving the player a chance to replace it with a basic land. (You're putting them into your decks now, right?)

So what are the most important lands for decks in Commander? It's those that help you do what you want to do the most. Smoothing out mana, giving you little spells, or simply getting in the way of another's runaway plan—lands should give you the mana you need with effects you want.

Just take it from your fellow friends above.

Speaking of advice, the feedback from last week's Melek, Izzet Paragon prompt has been stellar. I'm excited to share all the tips and directions for improving the deck as well as an updated list we can all sample from for further work.

This week, I'd like to key off the same personal viewpoints but for a different topic: What's the first thing you do when you start to build a Commander deck?

One of the most common pieces of feedback I get that isn't answering the weekly prompt is asking about how to build Commander decks. It's a much bigger question to answer than one prompt alone, so I'm breaking it up into smaller pieces. The first was changing and updating a deck, as you've already answered, so now we'll look at starting one from scratch.

When you're ready to answer, reply via email below. Join us next week when Melek returns with Increasing Vengeance. See you then!