elcome back to Perilous Research, DailyMTG.com's exclusive Magic Online column. The Magic Online Standard format has changed quite a bit over the past week. We came into last week with a format dominated by board-presence-focused creature decks. Naturally, things can't stay that way forever. Players on the cutting edge decided to evolve and Planeswalker-laden multicolor monstrosities with many copies of Supreme Verdict began to flourish. Today, I'm going to take a look at some of these format-defining innovations and attempt to identify their weaknesses and identify the next evolution of Return to Ravnica Standard.

We should take a look at some daily event results to get an accurate snapshot of the zeitgeist of Standard. 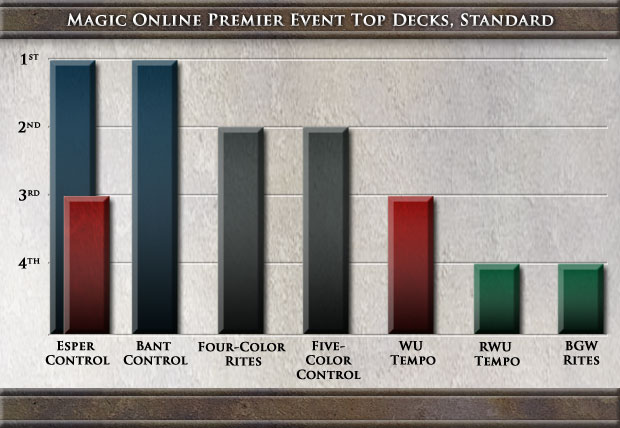 The new wave of control decks are performing well against the green-white decks that seemed to be taking over when we surveyed things last week. The format's beautiful diversity is obvious. The only archetype to repeat in the Top 4 of last weekend's Premier events was Esper Control. In both instances, the Esper Control deck was piloted by the same player. I'd like to start today by taking a look at MR_Thompson's Esper Control.

The Standard format seemed to be turning into a board-presence battle last week; the late stage of Standard games was all about Angel of Serenity. MR_Thompson correctly identified the nature of the format and recognized the strength of cheap removal, mass removal, and especially the impact of Planeswalkers. This has all the best tools for slowing down an offensive strategy. Lingering Souls churns out enough chump blockers to bide time until a board sweeper is found. Once the board is clear or close to it, MR_Thompson can start creating a Voltron board state with cards like Jace, Architect of Thought; Tamiyo, the Moon Sage; and Sorin, Lord of Innistrad.

I played this deck in a few heads-up queues and managed to go 4–1 with relative ease. My only loss was, in many ways, related to my inexperience with the deck. This seems to be a great archetype to hone your skills with. The deck is extremely formidable in the current Standard. It's very difficult to surmount this deck's strengths when it's in the hands of an experienced pilot.

This is just one of many new control archetypes that are beginning to emerge. Other players are also finding success with Planeswalkers; check out Kerrick_'s Planeswalker Control deck:

2 Appetite for Brains 4 Knight of Glory

Kerrick_ goes as big as you can with Nicol Bolas, Planeswalker. This is the first deck we've seen that takes advantage of Chromatic Lantern, one of the more interesting cards from Return to Ravnica. This deck foregoes synergy and instead chooses to play with the most powerful Standard-legal cards available. Turn after turn, this deck plays an incredibly potent threat that can potentially take the game over by itself.

This deck is interesting because it seems like it evolved from a creature- or board-presence-based deck. The deck has been molded to correctly attack the current state of the Standard metagame. This deck risks getting run over, but Thragtusk can undo a lot of aggression.

The format's first Planeswalker archetype, Bant Control, is having a bit of a revival thanks to its position in the current metagame. Here's the list that VinnieD used to win the November 3 Standard Premier event:

This deck functions and plays very similarly to the last two we looked at. The biggest difference is the lack of Lingering Souls. VinnieD trades Lingering Souls for a more synergistic creature base and better mana. One thing that that's really interesting about this list is the presence of three Sphinx's Revelation. It's becoming very clear that Sphinx's Revelation is powerful, but three of them in a Premier Event–winning decklist is borderline absurd. The Bant control deck seems like it may be pushed aside by similar decks with Lingering Souls, but the deck's overall strength means it will remain powerful even with big shifts in the metagame.

Top-end strategies may be enjoying a lot of success, but tempo strategies are becoming more of a threat, too. Heibing finished in the Top 4 of a Standard premier with this particularly impressive list:

I've been actively playing a similar deck for the last few days. The aggressive White-Blue Tempo deck is very strong in the current metagame. The deck aims to take over the game quickly and keep opponents on their heels while dishing out blow after blow. Cavern of Souls has become significantly less popular with so many strong multicolor spells, but we may begin to see Cavern of Souls make a bit of a comeback if more Bant or White-Blue Tempo strategies start becoming popular.

Sphinx's Revelation is something that was reserved for control strategies last week, but the card's strength is so high that we're beginning to see a single copy in just about every deck that can reliably cast it. This may seem strange, but I can wholeheartedly assure you that the newest Stroke of Genius is worth a slot in your deck.

Many players are taking a different approach to tempo in the wake of Return to Ravnica. Steam Vents and Hallowed Fountain make red-white-blue decks significantly more consistent than they have been in the past. Cards like Pillar of Flame make the tempo strategy a lot more resilient to cards like Geralf's Messenger. Let's take a look at rastaf's Red-White-Blue Tempo deck:

This deck is very focused on the Geist of Saint Traft tempo game. rastaf wants to acquire an early lead and finish the game very fast while out-tempoing opponents. Again, we see Sphinx's Revelation make an appearance. rastaf even chose to play an additional copy in the sideboard.

Blue decks may be pulling into the lead as they often do, but strategies built around Unburial Rites are still a major part of Standard. Here's the list that hima123 used to make it to the finals of one of last weekend's Premier Events.

This is one of the more interesting Unburial Rites decks we've seen. Deathrite Shaman is an incredibly potent threat that punishes players for using staples like Snapcaster Mage. Deathrite Shaman is also very strong against undying cards like Geralf's Messenger. The deck's ultimate goal is to start chaining Angel of Serenity into Angel of Serenity via Unburial Rites. The board presence advantage granted by the Angel should be enough to take the game over by itself. The deck has enough safety nets to keep the pilot alive and can even go aggressive while assembling the reanimator combo.

After sideboarding, the deck has access to Sphinx's Revelation and a number of other more-castable bombs. The deck would normally struggle when opponents had good hate cards like Rest in Peace, but the new sideboard plan lets this deck function very well without ever having to interact with the graveyard.

We can expect Planeswalker decks to perform well again this week. White-Blue and Red-White-Blue Tempo strategies have the cards available in Standard to make their decks very strong against the more controlling strategies in Standard. Tempo Strategies seem to be well positioned if they can find the right balance between strength against aggressive and strength against controlling strategies. Zombie decks will likely retain their popularity, but I don't see these strategies sticking around for very long now that every deck looks like an absolute nightmare for them.

The new Standard format has got me so excited that I've been actively grinding Constructed events for the first time in ages. There seems to be a really interactive metagame with a lot of room for innovation. This is the perfect time to buy into Magic Online with a Constructed deck. It's been a long time since we've had a format that rewards players so handsomely for innovation. Be sure to join me next week to stay up to date with the latest Magic Online Standard strategies. I'll be commentating the Modern Grand Prix in Chicago this weekend. Don't miss all the exciting action unfold in the aftermath of the Modern Pro Tour.