hen I first saw Erebos, God of the Dead I was stunned. 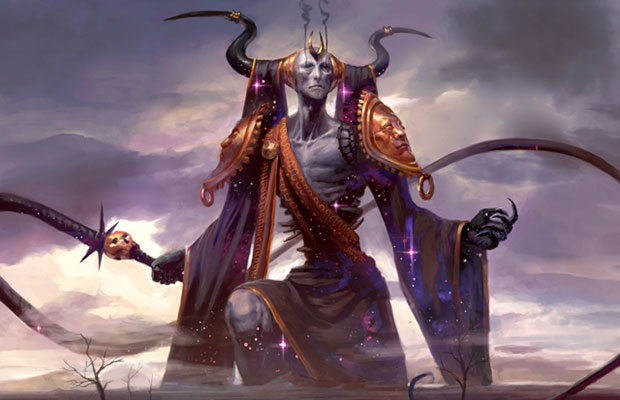 Erebos, God of the Dead | Art by Peter Mohrbacher

All of the Gods of Theros have incredible power backed by indestructible natures. 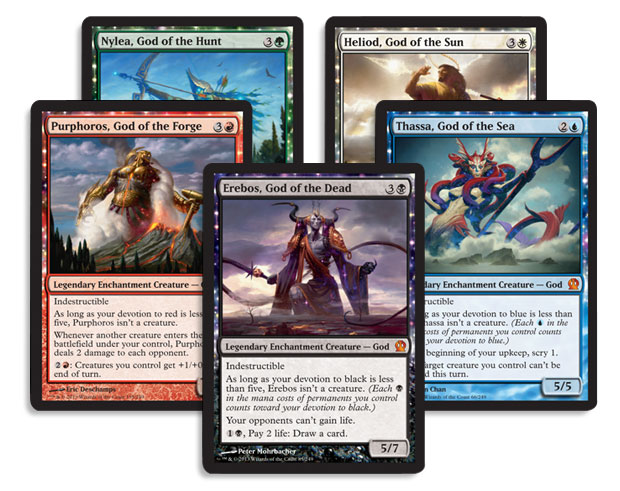 It's impossible to ignore the potential of the Gods when considering Commander, but it isn't as cut and dry as adding each of them to every deck possible. When we looked at Erebos together I pointed out a few ways to make the most of him and left the rest to you. Today, we'll go a step further, and look at why Erebos, God of the Dead is the God above all others in Commander.

Keeping in Step, in the Line

There are really two reasons to consider any of the Gods over other choices for your commander:

However, one of these outweighs the other: the latter. It takes devotion to devotion to "turn on" Gods as creatures on the battlefield. Without any regard to the amount of colored mana symbols, the activated abilities and static effects will always be there for you. Essentially, choosing one of the Gods as your commander for Commander gives you access to an indestructible enchantment.

Not all legendary enchantment creature Gods are created equal.

Heliod, God of the Sun grants your army vigilance, something matched by the much cheaper Serra's Blessing, and grants you the ability to create 2/1 white Cleric enchantment creature tokens, weaker than the effect Mobilization and Sacred Mesa provide. Even with the Spear of Heliod hanging around, making 3/2 vigilance creatures for four mana isn't terribly exciting. Surprising opponents with a cycled Decree of Justice or end-of-turn White Sun's Zenith is what makes white token decks explosive.

Thassa, God of the Sea lets you scry for one card at the beginning of your upkeep—nifty but much weaker in Commander than duels since you "get fewer" upkeeps in multiplayer—and makes a creature you control so it can't be blocked; that removes political potential for allowing other players' creatures to get through and is in a color without the greatest selection of efficient fatties to attack with. Bident of Thassa helps with the political desire to push players into attacking and combos with any attacking creature you might control, but blue has much more efficient ways to draw cards with creatures that don't require attacking, such as Consecrated Sphinx or Sphinx of Magosi.

Purphoros, God of the Forge is among the more powerful Gods for Commander, letting you Shock everyone else whenever another creature enters the battlefield under your control. He isn't limited to nontoken creatures, so even the humble Mogg War Marshal deals 4 to 6 damage to everyone for just two mana. He also gives you a mana dump to pump all of your creatures, which the closest red analog is Homura, Human Ascendant or Inner-Flame Igniter. Hammer of Purphoros plays nicely, giving your creatures haste, but sacrificing lands usually isn't desirable in Commander.

Nylea, God of the Hunt, as an avid green mage myself, left me hungry for more. Trample is an ability already present on plenty of powerful green fatties... like Roughshod Mentor, that also gives it out. Her repeatable ability granting +2/+2 until end of turn can help push damage through, but hitting for 2 more life for four mana isn't efficient in multiplayer, where spending that same amount of mana to make a creature or two is probably better. Bow of Nylea is impressive with a swarm of Saproling or Elf creatures, but the wheelhouse of effects activating it is narrow even in Commander, where recycling cards from the graveyard into the library is probably the most useful.

All of these Gods pale to what Erebos provides: nigh unstoppable card draw. For the same casting cost as Greed, we get its ability at an extra

and stop opponents from gaining life. When you start at 40 life, it's easy to spread out drawing five or more extra cards for a few turn cycles. (I've been known to draw more than ten through an unanswered Greed.) Throwing Whip of Erebos into the mix not only gives you recursion to stretch the life of creatures, but all your creatures lifelink to fuel drawing even more cards.

If you ignore devotion, choosing a God for your commander is all about choosing the most powerful effect for a multiplayer game. I think it's clear why so many of you liked Erebos, God of the Dead too.

Here are my five picks:

No Mercy either keeps your opponents' creature count down or keeps you safe, while Psychosis Crawler gives you that massive creature. Murderous Betrayal and Lich both drop your life total quickly, and then you swap it with your opponent's using Soul Conduit and laugh...

Psychosis Crawler and Soul Conduit are two cards that popped up regularly, and for good reasons. The former turns Erebos into a damage dealer that scales with multiplayer, and the latter is the usual suspect when life loss shenanigans are involved. Some of you even went in full force for this:

I picked these cards to be representative of categories of cards that would be in the deck. The Abyss is an example of repeated destruction (synergizing well with the indestructible commander). Soul Conduit has the neat trick of exchanging life... the entire deck would be built to whittle your life down then "combo" with an exchange, and the prevention of lifegain makes repeated exchanges worthwhile (whittling down everyone's life). Extraplanar Lens is representative of big mana fuel that black can provide. Killing Wave is representative of spells that allow you to pay a variable amount of life (set X high!). Lastly, Deepwood Ghoul is another category of card that allows you to take yourself to 1 just before exchanging life (and perhaps attacking with your indestructible Commander!).

There's a real danger in cool things like this: alienating your fellow Commander friends. A deck that focuses on this angle makes a great "one-trick pony" to show off the "Aha!" moment before stripping it apart for some other nefarious combination of cards. Keeping your shenanigans fresh and different can avoid a lot of heartache and conflict that comes with repeatedly smashing opponents the same way over and over again.

If you can generate twelve mana in one shot, the surprise potential of Soul Conduit is well worth it. (And so are drawing plenty of extra cards along the way.) Generating mana was a theme all its own:

I love the idea of an Erebos Commander deck (and can think of a few uses for him in Standard). The five cards I would have to pair with him would be:

Most of my picks keep up a sick mana advantage, letting me keep card draw up and keep Erebos a creature regardless of how many sweepers my opponent plays. The last pick (Hellcarver Demon) is my favorite Commander card and provides a beefy blocker, plenty of devotion, and a chance to desperation reset my board if things fall apart.

Nykthos, Shrine of Nyx is a new mana generator built to ride on a devotion theme. Unlike the previous list of mana accelerants, Nykthos relies on permanents that aren't basic lands to work. If you amp up devotion this will definitely be better for you than Urborg, but it also comes with the same "problems" the powerful Gaea's Cradle packs.

Devotion does offer other opportunities.

First card to jump into my head was Seizan, Perverter of Truth. Nothing is more awful than losing life and being unable to gain it back. Black has plenty of discard to counterbalance the card draw. Gray Merchant of Asphodel plays into the devotion theme and gains you life to turn into cards. Phyrexian Obliterator is auto-devotion and a very powerful creature anyway. Consume Spirit and its ilk smash irreversible damage at people while again fueling your life total. Pestilence Demon whittles everyone down, pumped up devotion, and can't kill Erebos.

As you can imagine from a Greed fan, I've toyed with Seizan, Perverter of Truth as a twisted version of Howling Mine. With its painful ability enhanced by Erebos, God of the Dead it might be Seizan's turn to really shine.

If you're building an array of ways to make extra black mana, Consume Spirit is amazing. I included both it and its older progenitor, Drain Life, in my recent Kaervek the Merciless deck and neither has let me down yet. I'd suggest including Drain Life over Gray Merchant of Asphodel, but if you're going deep on devotion to black, the Gray Merchant become far more effective for multiplayer games.

Life. Death. The eternal cycle. Erebos is both lord and servant of this fundamental truth. However, as an immortal, Erebos cannot die and instead sends these most devoted mortal worshippers into death on his behalf.

While lyrical phrases aren't how I usually receive thoughts on commanders, Mattezhion's picks are spot on if you plan to be the God of the Dead. Mikaeus, the Unhallowed and Harvester of Souls already make a fine combination, but the flavor interplay alongside Erebos is unreal. It's always easy to get caught up in the mechanics of "What's good, what's bad?" for a particular commander. Choices like these show that a flavor-based approach doesn't necessarily mean giving up on including awesome things. 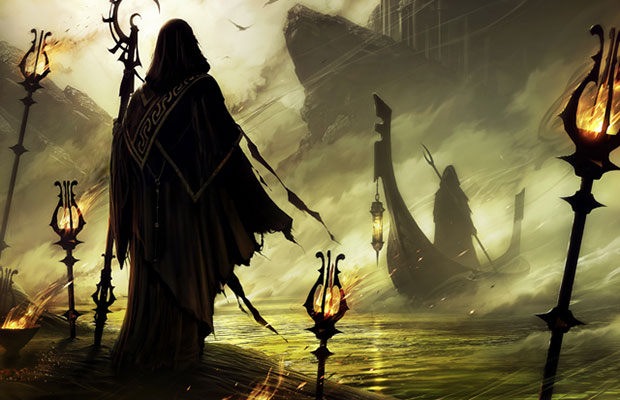 Rescue from the Underworld | Art by Raymond Swanland

Just How Deep do You Believe?

Counting the five Gods, there are thirteen legendary creatures in Theros. We've looked at both Polukranos, World Eater and Anax and Cymede, as well as Triad of Fates. Erebos, God of the Dead has been explored well, too. That's four down, with nine more choices possible, and that's what we need to work together for: From the nine remaining legendary creatures in Theros, which are you excited to build a deck around, and what would the deck look like?

Just a reminder that it's important for your decklist to be formatted like so:

13 Plains
6 Mountain
1 Tajic, Blade of the Legion
1 Sword of Vengeance

Enjoy the Theros Prerelease this weekend (I will!), and join us next week when we look at how we've handled the trickiest of Commander group situations. See you then!