Polishing Up For The Prerelease (Theros)

elcome back to Perilous Research. We're just two days away from the Theros Prerelease and the world of competitive Magic is about to turn on its head. It will be another few weeks before Theros is released on Magic Online, so we'll be focusing on the face-to-face side of Magic for today. We'll be looking at Theros Limited in an effort to get a leg up on the competition at our respective Prerelease events. Prereleases are the best way to enter the fray of tournament Magic. The environment is relaxed enough that we should expect our opponents and those running the event to make it a pleasurable learning experience for those of us who might be new to sanctioned events. The Prerelease is an excellent opportunity to trade for new cards, meet other Magic players, and learn the newest Limited format before the competition. 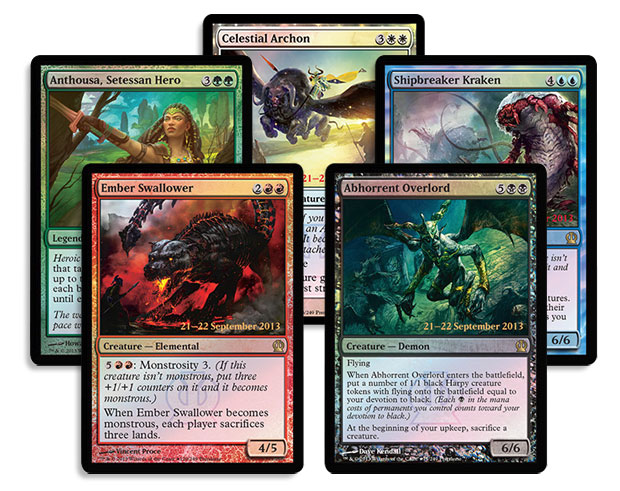 We shouldn't be bloodthirsty going into the Prerelease, but we can find great pleasure in playing our best. Theros should be an interesting Limited format, and the information we learn today will help us maximize our chances of taking home additional Theros packs at the end of our event(s).

The first steps in understanding Limited are the basic tenets of Draft and Sealed Deck. Going into a Theros Limited tournament, we likely want our deck to be playing seventeen or eighteen land. Our deck will usually be two colors, but it might be one color if we draft or open well and get lucky; it might be three colors if things didn't go as planned and we need more playables. It's unlikely we'll be splashing a third color in this set, but I could see some splashed Lash of the Whip making the cut in a lot of Sealed Deck card pools. We want our deck to have at least eleven creatures, but we would be happier if we could have thirteen or fourteen healthy bodies.

We should always be valuing removal spells very highly in Limited, but Theros further increases the value of instant-speed removal because of the heroic and bestow mechanics. We can use instant-speed removal to destroy our opponents' creatures in response to them attempting to use a bestow ability; this helps us because although they still get their enchantment creature with bestow as a creature, we've just used a probably cheaper card to deal with one of their cards that they probably spent more mana on.

The next step in understanding a new Limited format is learning how to maximize the value of the set's mechanics. In Theros, we're presented with two build-around mechanics: devotion and heroic. Both of these mechanics will drastically affect the value of cards in a given Sealed Deck pool or Draft. We'll start by taking a look at heroic and move on to devotion afterward. Mechanics like bestow, monstrosity, and scry are skill-testing abilities that can have huge effects on a game, but it's unlikely we'll be building our deck around any of these abilities unless we open multiples of a card that specifically rewards us for going deep, like Flamespeaker Adept.

Heroic rewards us for targeting our creatures with spells. The obvious conclusion here is that pump spells have improved in value, which might be true, but it's important that we maintain a strong creature count and have enough of the heroic mechanic on our creatures to make it worthwhile to value the pump spells higher. Pump spells may be better now, but a deck with only nine or ten creatures won't be thrilled with pump spells unless it has multiple copies of a rare heroic creature like Agent of the Fates. We can play through a few games in our head with the heroic creatures and discover that an overabundance of pump spells will still leave us wanting, especially against red decks that have access to a lot of inexpensive common and uncommon removal spells. The best way to take full advantage of the heroic mechanic is to combine it with the bestow mechanic. These two groups of cards work beautifully together and, instead of giving your opponents frequent opportunities to gain card advantage, you actually find incremental card advantage yourself by often forcing opponents to use two cards themselves to deal with the bestowed hero. Knowing when to go for bestow and when to hold back may be one of the better skill testers in Theros Limited.

Let's take a look at some of the best common and uncommon options to trigger heroic.

Chosen by Heliod may not look like the most exciting Limited card, but most of the creatures in the set have matching power and toughness, meaning that an extra 2 toughness might be worth a card in a lot of situations. Drawing a card when this enters the battlefield means that it isn't much of a liability as long as you wait for your opponent to be tapped out before you go for it. I wouldn't recommend playing this in every deck, but it gains a lot of value in a deck with a healthy amount of powerful heroic triggers.

Dauntless Onslaught is the perfect combat trick for a deck with a lot of heroic. The card will often net a two-for-one (we will be able to trade our Dauntless Onslaught for two of our opponent's creature in an ideal situation) on its own, but its power level increases drastically when we're able to trigger one or two heroic creatures in the process.

Observant Alseid is a card we can pick up very late in drafts that works well with heroic and increases the value of each Chosen by Heliod we might have picked up earlier.

Thassa's Emissary's bestow may seem a bit overcosted, but the potential card advantage is worth the mana. With heroic and a massive +3/+3 boost, your opponent will need to find a powerful spot-removal spell, go into an Abyss-like chump-blocking game plan, or just let you start drawing extra cards.

Boon of Erebos will have a lot of value, especially in a tournament like the Prerelease, where most players won't expect a black pump spell. The fact that Boon of Erebos can also be used to save creatures from things like Dark Betrayal, Sip of Hemlock, and Hero's Downfall makes me wonder if this card might end up being good enough for Constructed.

Coordinated Assault is a tremendously undercosted Dauntless Onslaught that may end up being a first pick if the heroic cards garner a specific draft archetype. First strike is very strong with creatures that have growing power and a red-white strategy will usually be forcing opponents to block, even when they're tapped out. I'm excited about this card in the new Limited format.

Dragon Mantle works well with first strike and should be valued accordingly based on the amount of first strike or double strike creatures in your deck.

Devotion is less complicated than bestow. Unlike heroic, devotion is less of a liability if we build our deck correctly and more of an engine that should allow us to break stalemates. Devotion rewards us for going deep on a single color. Common and uncommon devotion cards like Evangel of Heliod, Gray Merchant of Asphodel, or Disciple of Phenax will almost always make the cut in our Limited decks, but these cards become tremendously more powerful if we're able to maximize our devotion to a single color. Gray Merchant of Asphodel in particular is an exceptional Limited tool if you're lucky enough to find yourself with multiple copies. By itself, Gray Merchant of Asphodel is a Highway Robber with some extra toughness, which is already playable. However, the card becomes absurd if we curve into it with other black permanents. We can expect our social media feeds to be rife with stories of four or five Gray Merchant of Asphodel decks draining their way to victory without ever attacking the opponent. The devotion mechanic creates an interesting push and pull between heroic and devotion. Pump spells are good with heroic, but devotion rewards us for maximizing our permanent count within a given color. In a perfect world, we want to be using most of our noncreature slots for removal, bounce, or noncreature permanent cards when we're building around devotion. If we find ourselves in a spot where we have a lot of good devotion and heroic we should try to almost exclusively use bestow cards to trigger our heroic abilities. (There are exceptions, though—a very powerful pump spell will always be good, for example.)

Devotion will be a huge part of Theros Limited. Reading the signals in a draft will allow strong players to corner a specific color and maximize the strength of their devotion cards. Around the fourth to sixth pick of a draft we will start to notice which colors are open, meaning the players on our right are not playing these colors. (We know this because they're passing us powerful cards of those colors.) Once we recognize a trend, we need to weigh the power of the cards being passed to us against the power of the cards we've already passed of that color. If we passed Abhorrent Overlord (Not that we would. Come on now, that card is insane!) then it doesn't matter that we've noticed that black is open to the right of us because the player on our left will be in black anyway and cut us off in the second pack. The trick is finding a balance. We can take the most powerful cards within one or two colors for the first few picks, but finding an opening in a color that may have been underrepresented in our early picks will usually reward us generously.

I'm anxiously awaiting my midnight Prerelease. In fact, I'm already registered to play at two different stores in the Northern New Jersey area this coming weekend. Come stop by Gamer's Edge in Kearny, New Jersey, or Game On! in Clifton, New Jersey, and feel free to pick my brain about all things Theros. Remember, space is limited at these events and most gaming stores accept early registration. Find the Theros Prerelease nearest you.