Preparing for the Magic Online Prerelease

elcome back to Perilous Research, DailyMTG's exclusive Magic Online column. Today, we're going to be taking a look at Magic 2014 Limited in preparation for the upcoming Prerelease events that begin tomorrow, July 26. We've all grown accustomed to Return to Ravnica Limited and it's important that we will be able to adapt to more traditional Draft strategies when transitioning into Magic 2014. We'll start by discussing Sealed Deck strategy and move on to the Draft format in the second half of the column. 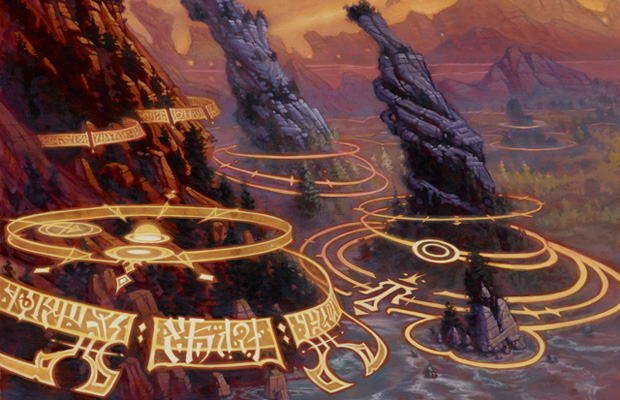 Core set Limited is a lot more straightforward than Return to Ravnica. We usually want a two-color deck. Splashing one or two high-power cards, like Doom Blade, is usually worth it, but there isn't a lot of colorless fixing available and the evenly spread three-color decks will lose too many matches to their mana bases to make them worthwhile. We might be able to draft or open a mostly green deck with a few copies of Lay of the Land that splashes two or even three other colors, but I wouldn't recommend going deep on a second color if we decide to take this route; decks like this will want at least nine Forests and it's unlikely we'll be able to support a double-white or double-red spell if we're looking for one-ofs or two-ofs with our Lay of the Land.

Magic 2014 is a set where we will usually want seventeen lands in a two-color deck that's packing around sixteen creatures. It's okay to deviate from these numbers if the math or card pool dictates it, but this general approach is optimal.

It's important that we take our mana curve and creatures into account when we're building from our Magic 2014 sealed pool. You're going to want at least seven creatures that cost three or less and at least thirteen creatures in most decks. Some cards drastically increase or decrease in value based on these simple numbers. For example, Trollhide is unbelievably strong in a deck that has fifteen or more creatures, a few of which cost two mana. Being able to cast Trollhide on the third turn when a non-black/non-blue opponent taps out is going to change the texture of the game drastically, likely forcing the opponent into early chump blocks or an extremely defensive posture with his or her four- and five-drops. Meanwhile, Trollhide is quite weak in a deck that has no creatures that cost less than three and only a few three-casting-cost dudes. We become less likely to maximize the impact of the card when it threatens to take up our fourth, fifth, or sixth turn. For this reason, we should likely assign Trollhide a new mana cost when laying out our deck and mana curve.

What's a mana curve? Stronger Limited players will often lay out their decks in columns that are representative of a spell's casting cost. Generally speaking, we want our column of two-drops to be larger than our column of three-drops and so forth. Approaching Limited deck construction in this way helps our deck maintain a strong tempo. Playing a lot of two-mana creatures will make it significantly more likely that we'll have something to do on our second turn. Each subsequent turn will increase our hand size, meaning that we need fewer of the heavier-casting-cost cards to reliably use all our mana efficiently. We will try separating our reactive cards from our mana curve completely. For example, Doom Blade may cost two mana, but it's likely going to be used most efficiently in the later turns of the game. We're not playing Doom Blade with the intention of murdering the first bear we see, we want to save it for a creature that we're unable to deal with. A card like Trollhide may cost three, and we would put it in the column of three-casting-cost-cards so long as we had four or more creatures that cost one or two mana, but if we had an abundance of three-casting-cost creatures and only one or two creatures that cost one or two, we would put Trollhide in the column with four-casting-cost spells because we would be more likely to be playing the card on that turn. Our mana curve won't always look perfect, but using this as a general guideline will drastically improve our win percentage in Limited.

Powerful pump spells like Giant Growth are exceptional in decks with a lot of creatures, but we probably don't want to play the green instant if we're packing fewer than thirteen creatures, especially if some of them are walls. Using Giant Growth defensively is very dangerous and opens us up to a lot of situations where our opponents can get two of our cards for one removal or pump spell of their own. This means we want to ensure that we'll have some sort of board presence if we can get it. The "pile of removal with a few creatures" decks are generally very strong in core-set Limited formats, but Giant Growth won't fit in decks like this.

Chances are, we're going to open one or two extremely powerful cards. A card like Kalonian Hydra, for example, is powerful enough that it's probably okay to weaken the general path of our deck in order to include it. Sure, we may have two colors with deeper card pools than green, but a card that has the potential to win a game all by itself has untold value. It's also important that we're able to recognize our bombs when building our sealed deck. For example, a card like Shiv's Embrace is going to be very strong so long as we have enough creatures in our deck, but a deck with three copies of Dawnstrike Paladin would regard Shiv's Embrace as full-fledged atomic.

Signaling and recognizing signals is important in a format that encourages us to play two colors. For example, let's say we opened and took Briarpack Alpha and it was the only high-pick green card in the pack. We get passed a pack with Sengir Vampire, Doom Blade, and Rumbling Baloth. Doom Blade is probably the most powerful card in the pack, but by taking the Doom Blade we're likely putting the two people on our left into black and green by passing the Rumbling Baloth and Sengir Vampire. By taking the Rumbling Baloth, we encourage both of those players to fight over black cards and ensure ourselves a generous helping of green bounty in the second pack.

Forcing one color early on is a good way to set ourselves up for the strongest possible second color. Staying the course with a single color will allow us to identify which colors are the most open as the first pack winds down. We can try to remember what we passed in our first two packs and use that information during our ninth and tenth pick to move in on a second color. Perhaps we only passed one playable white card in each of those packs. If those white cards come back to us, even if they're not particularly strong, then we can likely assume that white is open and solidify our color choices.

It's also not completely impossible to end up a single-color deck in this format. It's unlikely, but some lucky opens in our packs and the packs around us could end up setting us up for a single-color deck that gets to take full advantage of cards like Corrupt or Howl of the Night Pack.

Risks vs. Rewards: Don't be Afraid to Try Something!

A lot of players will be quick to pass a Bogbrew Witch, but there's no harm in grabbing the rare, especially if it's early, and building our deck accordingly. Similarly, we shouldn't be scared to try cards that we're unsure of. For example, Dawnstrike Paladin ended up in most players' sideboards at my local Prerelease, even though most of the players had a good amount of pump spells and even a few strong Auras. We shouldn't think about the strength of cards in a vacuum, but rather assess cards on how they're going to play in a given format. There aren't many cards at the common level that interact favorably with Dawnstrike Paladin and any sort of enhancement we can give to the 2/4 body becomes ridiculous thanks to the temporiffic combination of lifelink and vigilance. We should be pushing our cards to the maximum potential. Do we have more than one Advocate of the Beast already? Then we should start valuing Beasts significantly higher than we might have previously.

It's often difficult to switch colors after the first half of the first pack in a draft, but sometimes it's necessary. For example, let's say we opened a pack that was stacked with playable cards, we went ahead and took a Rumbling Baloth over a slew of other strong commons and uncommons because we have a preference for green in the format. When ninth pick rolls around, we notice that the Brindle Boar and Verdant Haven are missing from the pack while the Messenger Drake is still there. It becomes apparent that green is overdrafted at the table and blue is underdrafted. If we have four or fewer green cards with no bombs at this point, it's probably worthwhile to scrap green entirely and move in on the obviously open blue cards. However, if we've dedicated ourselves to green then we may need to value cards like Verdant Haven and Lay of the Land higher in the second and third packs so we might be able to splash strong card draw and removal.

Next week, we'll take our first look at post-Magic 2014 Standard on Magic Online. I'm excited to see how cards like Garruk, Caller of Beasts; Archangel of Thune; Gladecover Scout; and Kalonian Hydra end up affecting the Standard metagame. Don't miss the Magic 2014 Prerelease events starting tomorrow and taking place throughout the weekend.