Quick, to the Opal Palace!

have some stunning news that I want to announce first. 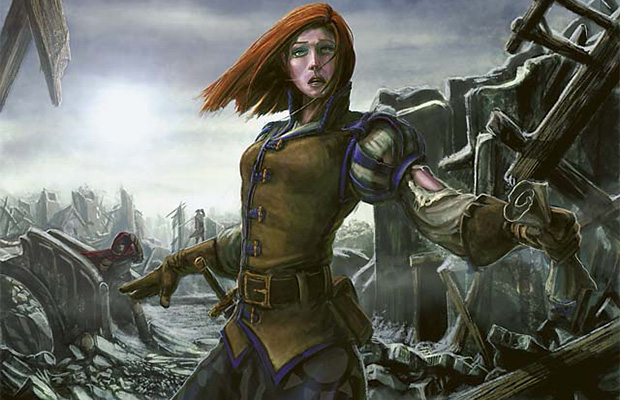 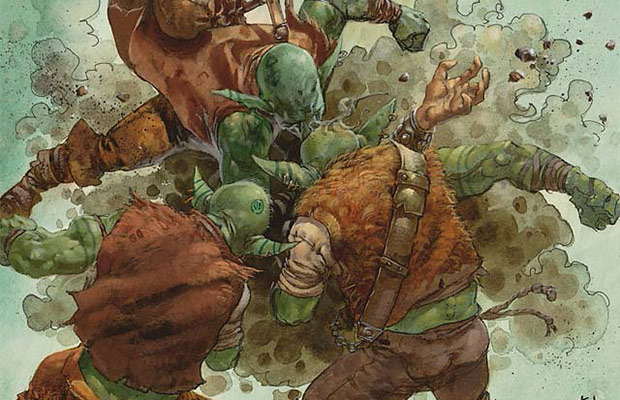 Okay, that's wasn't exciting or surprising for most of you. But before you run me out of town on a rail, hear me out. We had the pleasure of sharing the latest Commander-specific mana fixing , as well as several decks that showed off one of the newest commander options, Roon of the Hidden Realm. But that's not the whole story. There are nine other new legendary creatures that we can now build decks around, and I'm not the only one excited to build new decks.

It's you who convinced me there's more to Commander (2013 Edition) than just Roon, and you shared the decks and strategies to prove it.

March Upon the Fated Battlefield

New commanders are one of the best ways to try a different type of deck. Several Nekusar, the Mindrazer decks were sent in, but Samuel's is right on point for theme and rationale for changing up.

Since I typically run an aggressive, commander-damage kill-shot deck with Ruhan of the Fomori I wanted to build something a little more subtle and insidious. When I saw Nekusar, the Mindrazer, I knew I wanted to build what I've taken to call a "group bear-hug" deck, where I squeeze the life out of my opponents by giving them all the cards they could ever dream of, but always at the shake of the monkey's paw. Plus, it has the thematic draw of being the "evil" counterpart to Ruhan, trading white for black. It feels a little light on removal/retrieval, so tips there are appreciated, and my playgroup typically sticks to cards printed in the Modern format.

That being said, here is Nekusar's Boon for you:

Everybody loves drawing cards. If you're playing blue in Commander, the odds are good you have a few ways to reload your hand and then some. Nekusar ostensibly helps opponents out by giving them extra cards, although obviously at a price. However, Nekusar is also precisely the type of commander that keeps company with the likes of Kaervek the Merciless and Linvala, Keeper of Silence: the type of commander that punishes opponents relying on one plan.

Nekusar alone isn't that scary. In fact, giving Phyrexian Arena to opponents is probably a net benefit for them, since everyone starts with plenty of life. But throttling players who would draw all their cards puts a ceiling on how far ahead someone can get, and I suspect some opponents will enjoy keeping Nekusar, the Mindrazer around if only for that.

Of course, using Vedalken Orrery or Leyline of Anticipation to drop Nekusar onto the battlefield in response to Prosperity won't win any friends either. When wielding the power to punish opponents one should tread lightly.

Or avoid punishing players at all.

I'm a massive fan of flavorful combos so the legend I am looking forward to building with is Prossh, Skyraider of Kher. The combo involves Cloudstone Curio, two 0-mana Kobolds (of Kher Keep, Crookshank, or Crimson) and Dragonstorm.

Curio allows me to bounce and replay the Kobolds enough times to get a huge Dragonstorm, the most important target of which is Karrthus, Tyrant of Jund, to give all my Dragons haste. I think the flavor of using Kobolds to get Dragons is fantastic with this commander; technically I could build the deck now with another Jund legend but it just wouldn't feel right, equally Priest of Urabrask or Burning-Tree Emissary can be used in place of the Kobolds but again, it wouldn't be flavorful.

The rest of the deck that isn't Dragons is fleshed out with the better devour creatures (like Mycoloth), to make use of the Kobolds Prossh makes; land ramp; and tutors in order to find the pieces for the combo. The idea is that the deck doesn't actually need the combo to win but will try and assemble it.

I love decks like Archie's. I believe these are the archetypical Commander decks many of us think of when talking about the format. There's flavor, explosive potential, a colorful mana base, and Dragons to terrorize the battlefield. The deck isn't necessarily fair—Dragonstorm is Dragonstorm, after all—but it doesn't focus solely on being unfair either.

I mean, where else can you pack in flavor and typical Commander action?

I'm building a deck around Sydri, Galvanic Genius. Not only does her ability make an artifact-focused deck pretty aggressive, her mana cost finally allows a Karn Liberated-like deck with Esper colors (thank you Wizards)!

Since the ability to turn CMC into power and toughness makes all your artifacts pretty efficient creatures, the goal is to land a couple high-cost and high-impact artifacts and turn them into regular recurring threats. The best examples of this are Akroma's Memorial (which when animated becomes Akroma herself!), Darksteel Forge (of course), and Spine of Ish Sah. Since the deck is so focused on artifacts, I also have to include the traditional artifact mana and tutors.

Since it's pretty easy to put together some powerful combos with artifacts, I elected to include a couple, but make sure that executing them will be truly something unusual (and awesome). For example, when animated by Sydri, Basalt Monolith (or Dreamstone Hedron, Thran Dynamo, Gilded Lotus, or Grim Monolith) can produce infinite mana with a Voltaic Construct out. Normally that's no fun, as winning on the spot with something like Prosperity or Exsanguinate isn't going to make you a favorite at the table. So instead, the only way to actually turn infinite mana into an instant victory is with another fun synergy in place: Thopter Foundry and Spine of Ish Sah. Once you have infinite mana, you can sacrifice and re-cast the Spine as many times as you want, destroying everyone else's permanents, making infinite 1/1 Thopters, and gaining infinite life! Now the odds of setting up this four-piece combo are pretty slim, but it'll be pretty epic when it does!

Sydri could make for a decent Spike Commander too, if you wanted to add in all the other obvious two-card combos. That's really what's great about her, I think; she can be a commander that allows you to easily swap out a package of cards to go from a casual kitchen table deck to the victor of even the most cutthroat Commander matches. That's value, right there!

My current decklist, for reference:

1 Sphinx of the Steel Wind

Artifacts that produce mana and value are generally considered staples in Commander. Taking those staples and getting even more value out is a recipe for danger. Johann's approach recognizes both side of the story: The power and consistency in value-based artifacts, and the risk of dominating or alienating the other players in games. Balancing between the two is the art of good Commander, bringing enough power to play to win without overwhelming everyone else all at once.

The legendary creature I'm most excited to build around is Oloro, Ageless Ascetic. I love lifegain and I feature it in most of my decks. Oloro is amazing in that I don't even have to cast him to gain life, and he basically has me start the game at 42!

Since the giant has you gain 2 life every upkeep, I'd borderline force myself into playing only cards that gained 2 life to stick to the theme. That means playing cards like Bloodchief Ascension and Obzedat, Ghost Council—and Beacon of Immortality, since "double" is basically 2, right? I'd also include cards that take advantage of the lifegain, so cards that require you to pay life (Erebos, God of the Dead; Underworld Connections; Righteous Aura) and cards that profit off of a high life total (Serra Avatar, Divinity of Pride, Felidar Sovereign).

All that life manipulation is bound to get you some hate during games, but being in the colors of boardwipes, pinpoint removal, counterspells, and card advantage (Esper!) should make things a little easier!

Not everyone sent in a complete deck (most of you did, even though it was just a bonus request) and I think sometimes that a better place to start. Rahil's life-based theme is often underrated in Commander. You start with more life, so why would you need more?

Erebos, God of the Dead and green are two excellent reasons to gain some life. Phyrexian Arena and Underworld Connections are two more. Oloro, Ageless Ascetic is one of the best commanders for anyone who wants to translate extra life into extra value. Drawing cards (Baleful Force), killing creatures (Toxic Deluge), creating tokens (Phyrexian Processor)—the possibilities for life in Commander are everything you want to be doing in a game.

I mean, where else can Forcefield and Righteous Aura be so scary to see?

All Glory to the Victor

Which new commander is the one that excites me the most? 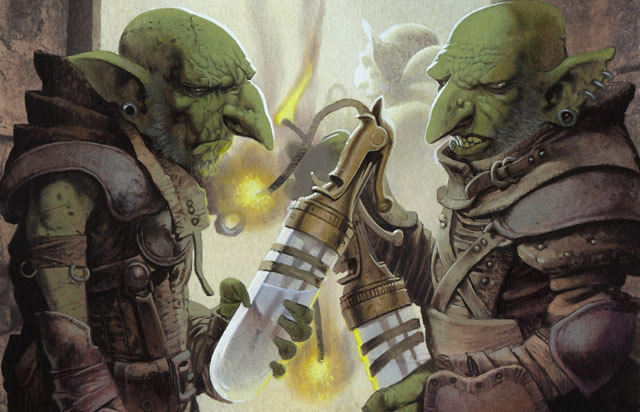 My first Commander deck was built around Kresh the Bloodbraided. After I chose to take it apart I've never really rebuilt a full-on Jund deck again. Shattergang Brothers have rekindled my excitement in a big way. Each ability stands alone as a possibility, but the strength of any activation relies on the rest of the battlefield.

Shattergang Brothers won't trample a player to death in short order. They won't wipe a battlefield clean or scour every artifact and enchantment from play. They require a starting resource, so even beginning a reaction requires giving up something before anyone else. But the ability to trade random creatures, artifacts, or enchantments (that are probably going to be destroyed anywhere) for everyone else's worst stuff isn't going to ruffle many feathers either. It's right in a sweet spot of potential power and moderately annoying that lets me focus on all of the other things I can do.

But I'm sure Abyssal Gatekeeper will still make an appearance.

Changing things is an easy way to get into new Magic cards, but it's not the only way by any stretch. Between the decks, cards, and stories you share, there's another common way I hear about you bringing variety to your Commander experience: Commander variants.

As you might imagine, this week's question aims to find out more: Do you play with any twist, variant, or rule change on Commander? Is so, how does it work? If not, why not?

While the "normal" Commander rules ensure everyone is playing the same format, small groups will find tweaks and changes to create better replay experience. I'm looking forward to what some of you have come up with, or why you don't adjust any rules to suit.

Join us next week when we tear it all down. See you then!