Off to the Races!
(January Standard Compendium)

ello and welcome back to Perilous Research, DailyMTG.com's exclusive Magic Online column. Every month, I scour Daily and Premier Event results on Magic Online, finding appropriate decklists of every archetype that 4–0ed a Daily or Top 8ed a Premier. In doing so, we're able to get a vivid snapshot of the current state of Standard. This month, I also have another Gatecrash preview to introduce.

Having complete knowledge of the current Standard format gives you a big advantage over less-informed opponents. It shouldn't be too difficult to infer the remaining cards in an opponent's hand after turn five if you're familiar enough with everyone's decklist. You can run over an opponent and not see much from him or her in the first game and still be able to sideboard correctly. A strong understanding of the current format will give you a huge edge in any competitive Standard environment. 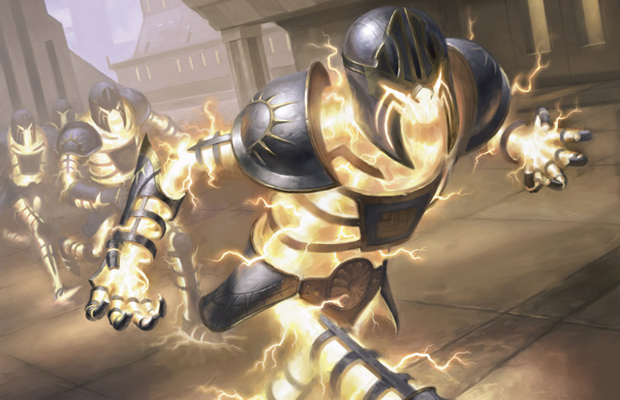 Let's get right into the thick of things with some decklists!

Black-Green Aggro was popularized by Brian Kibler. The deck was designed in a way that allows its pilot to establish a resilient board presence very quickly. The inexpensive nature of the deck allows it to defend itself on the early turns against the most aggressive decks. Once the board is stabilized in aggressive matchups, the black-green player's creatures can start to outclass the opponent's creatures as Predator Ooze gets larger and Rancor starts breaking through the defensive line. Against control decks, the deck gets on the board quickly with cards like Strangleroot Geist, Predator Ooze, Wolfir Avenger, Lotleth Troll, and Dreg Mangler; all these cards present extremely fast clocks while still being resistant to Supreme Verdict. This deck struggles with Bant Aura strategies, but that can be addressed by updating the sideboard appropriately.

Jund Aggro was very strong for few weeks earlier this month. The deck is exceptionally strong against Red-White-Blue Flash and has game against any opponent. This deck leans very heavily on its Bonfire of the Damned. Always play removal before creatures when playing against the Jund Aggro deck; it's more important to minimize the board presence of a deck with four Bonfires than it is to establish your own board that might just join the damned in the graveyard.

Mono-Red is still one of the best aggressive decks in the format. The deck performs well against mainstream Rakdos lists, Jund Aggro, and Omnidoor, but sometimes struggles against the currently popular Naya decks. The deck will remain especially popular on Magic Online because it finishes matches quickly and most of the cards are easy to acquire.

3 Bonfire of the Damned 4 Farseek 1 Sever the Bloodline

Jund Midrange has been a part of this Standard format since the beginning and the lists just keep getting better. It's a Bonfire deck, so you should play accordingly, but it's also important to note that you need a reasonable top end to compete here. If a player allows Jund Midrange to establish a board, then a miracled Bonfire of the Damned will usually win the game outright. However, if you trade aggressively and use removal spells, you're likely going to have to compete with a Staff of Nin or a Planeswalker in the midgame. If you can handle these two stages of the game you should be well prepared for the Jund Midrange Matchup.

Red-White-Blue Flash decks have been the tempo deck of choice ever since Gerry Thompson almost Top 8ed at Grand Prix San Antonio less than two months ago. The deck is good against the early aggression from most aggro decks, but it often struggles with midgame threats like Thundermaw Hellkite or Falkenrath Aristocrat. Esper Control decks are particularly difficult for this strategy because they're given the opportunity to easily turtle while they assemble a Voltron-like squadron of Planeswalkers to take over the game. This is still one of the "best" decks in Standard, but its weakness against the Bant Aura deck means it's going to need to make some changes if it wants to remain tier one.

Black-Green-White Unburial Rites strategies are nothing new, but the format is likely in a place where it's going to have less sideboard hate for graveyard decks now that people need enchantment removal/sacrifice effects, Pyroclasm effects, and/or Supreme Verdicts to beat the Bant Auras strategies. Even so, this deck will have an uphill battle ahead of it against the new Bant Aura deck. You can expect these decks to have more than one Ray of Revelation in the sideboard in coming weeks, but I'm not sure if that's enough to stop the gigantic Invisible Stalkers tramping about in the red zone.

Nightshade Peddler/Izzet Staticaster strategies were strong prior to the rise of Bant Auras. This strategy is well positioned against all the decks relying on Angel of Serenity and Bonfire of the Damned for removal, but it often struggles in postboarded games against white decks because Rest in Peace is extremely strong out of the opposing sideboards.

Esper Control is doing surprisingly well given the current environment. It preys on decks like Red-White-Blue Flash but it also has game against the midrange and aggressive decks. This deck can easily transition into a strategy that's strong against anyone if the sideboard is tweaked for a particular event. I expect this deck to gain popularity in the coming weeks because of its great positioning.

When I first saw the Door to Nothingness decks I thought they were a bit silly. That being said, the Omnidoor strategy has proven itself to be a tier one control deck now that the dust has settled a bit in Return to Ravnica Standard. The deck does very powerful things and has the ability to shrug off a lot of the format's aggression.

The Red splash Black aggro deck is incredibly strong against the mainstream Rakdos zombie decks. The deck plays very similarly to the mono-red decks, but Falkenrath Aristocrat and the black splash significantly help the deck against Supreme Verdict.

Naya Midrange decks had a lot of success a few weeks ago. The deck performs well against the aggressive red strategies and Rakdos, but often struggles in control matchups. These lists usually have a few Bonfire of the Damneds and you should play similarly to the way you play against Jund Midrange. Naya's overall game plan isn't quite as powerful as Jund Midrange, but the sideboard allows it to more easily compete with Unburial Rites decks and Bant Aura strategies.

2 Zealous Conscripts 3 Bonfire of the Damned

4 Cavern of Souls 3 Huntmaster of the Fells 3 Bonfire of the Damned 2 Garruk Relentless 1 Sigarda, Host of Herons
75 Cards

Naya Humans is similar to the aggressive green-white decks that started popping up in November. This deck will likely suffer a huge hit now that Supreme Verdict is going to see significantly more play. Try to survive the early game here because most popular spells that cost five or more mana will be difficult for the Naya Humans deck to get around without expending a lot of resources.

2 Cavern of Souls 4 Huntmaster of the Fells 4 Olivia Voldaren 3 <a href="https://gatherer.wizards.com/Pages/Search/Default.aspx?name=+%5BBonfire%5D+%5Bof%5D+%5Bthe%5D+%5BDamned%5D" data-sr