elcome to the second week of Gatecrash previews here on DailyMTG.com. Today, we're going to take a look at the current state of Standard and discuss an exciting new tool for Gruul mages.

Return to Ravnica Standard has evolved faster and more drastically than any other format in recent memory. Zombies gave way to Jund, to which players reacted with big mana control decks. Aggressive Selesnya, Rakdos, and Mono-Red strategies punished the most controlling decks out of the format and remained dominant for a few weeks before they were overshadowed by Naya decks of all different varieties.

I'd like to spend a moment examining the most recent Standard Premier Event on Magic Online. Let's start by taking a look at the results:

Naya Midrange and Naya Humans have gone from being appropriate metagame calls to actual tier-one strategies over the last few weeks. The decks have all the appropriate tools that are necessary in the control matchups, and they manage to completely destroy most creature-based strategies without sacrificing much in other matchups. Here's Saruyama's winning decklist:

One of the most effective tools available to the Naya strategies is Selesnya Charm. The card does a tremendous amount of work in virtually every matchup: saving creatures from lethal burn spells, dispatching Thundermaw Hellkites and other monstrous fatties, and popping in surprise blockers to help stave off the early aggression of Rakdos and Red decks.

Historically, pump spells haven't been great in Constructed unless coupled with some type of gimmick, like infect. Selesnya Charm, however, manages to overcome the narrowness of pump spells with two other modes that are both relevant in the Standard format.

Oftentimes, it can be difficult to evaluate a pump spell. For example, Selesnya Charm gives a creature +2/+2 and trample for

; it's a fine deal, but certainly nothing to write home about. It's the versatility of the card that makes it so powerful.

What if we could sacrifice a little bit of that versatility for a lot more power? 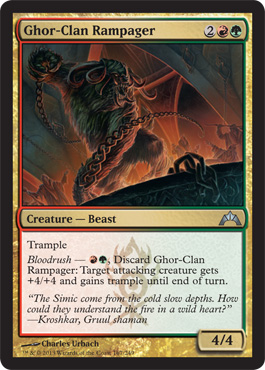 You may not be excited about this card upon first glance, but allow me to appeal. For

we get an uncounterable +4/+4 and trample. That's not just pretty good, it's actually one of the better pump spells ever printed.

Think about Colossal Might. That's a card that saw a bit of constructed play in its time and it's not even close to as powerful as the first half of this card.

One of the largest inhibiting factors for pump spells is their situational nature. A powerful pump spell may be a good card in the abstract, but it gives opposing players opportunities to attain card advantage. If your opponent happens to have an instant-speed removal spell to use in response to your pump spell, then he or she just used one inexpensive card to deal with two of your cards. This makes pump spells excellent skill testers. Savvy players will save these card until their opponent is tapped out, ensuring that the pump will be successful.

Unfortunately, sometimes an opponent never gives you that opportunity. Many control decks will happily pass the turn over and over with removal spells up and wait for you to overcommit to the board so they can get card advantage with a card like Supreme Verdict. If a control deck deals with all your creatures before you get a chance to use your pump spells, then the control player attained an even bigger advantage by stranding dead cards in your hand.

Ghor-Clan Rampager isn't just a pump spell, though. For

we can get a 4/4 trampler. Sure, that doesn't sound like a Constructed creature, but it successfully fights most creatures being played in Standard and it doubles as an insane pump spell. No one would play a 2/2 with vigilance for

, but if it could also be a reasonable removal spell or pump spell, then it becomes an integral part of the metagame.

There are a lot of nice targets for Ghor-Clan Rampager in the current Standard format. Fencing Ace and Silverblade Paladin are the most obvious. It's not unreasonable to imagine a lot of different scenarios where a bloodrushed Ghor-Clan Rampager wins the game on the fourth turn.

Bonfire of the Damned is one of the better cards for this type of strategy. Basic Magic game theory encourages us to play as many creatures as possible when playing Bonfire of the Damned. The more board position you're able to establish pre-Bonfire, the more likely you are to just kill someone when you hit your miracle. Ghor-Clan Rampager makes a lot of sense because it gives this type of deck a great way to interact at instant speed while still maintaining the high creature count that's necessary for Bonfire of the Damned to be optimal.

I'd like to put together a sample deck that takes full advantage of Ghor-Clan Rampager's versatility and power.

It's pretty clear that Ghor-Clan Rampager plays well with double strike. Silverblade Paladin and Fencing Ace will be obvious inclusions. When coupled with these cards, Ghor-Clan Rampager can do a jaw-dropping 8 trampling damage for two mana.

Rancor will definitely help augment our strategy if we're already packing a healthy dose of double strike. Rancor can also be great for testing the water with a double striker attack. If your opponent elects to take damage from a double striker with Rancor on it, you can be reasonably sure he or she doesn't have a castable removal spell and you're in the clear to cast a lethal pump spell or activate Ghor-Clan Rampager's bloodrush to finish the game.

Avacyn's Pilgrim is an excellent accelerator that helps fix our mana and picks up early Rancors to apply pressure when we're on the play or our opponent stumbles.

Sublime Archangel is absolutely perfect here. Again, we're packing a lot of double strike, so giving all our creatures exalted can threaten to kill an opponent in one swing. It's also worth noting the synergy of Sublime Archangel with Ghor-Clan Rampager's trample and the bloodrush ability granting trample.

This deck is surprisingly mana hungry, as we'd like to be able to dump a whole bunch of mana into Kessig Wolf Run at the latest stages of the game, forcing our opponent to have a removal spell for every creature we play. I've included a few copies of Borderland Ranger to help us fix our mana, attain card advantage, provide synergy with Bonfire of the Damned, and to give us better Restoration Angel targets in general.

Restoration Angel can save our creatures from untimely removal spells, protect us from opposing Restoration Angels, acquire card advantage via surprise and Borderland Ranger, and create surprise flying double strikers alongside Silverblade Paladin. It may be correct to play four of this card, but I wanted to make this deck as dedicated to Ghor-Clan Rampager as possible.

I only have a single copy of Thalia, Guardian of Thraben. This card is also exceptional with Ghor-Clan Rampager. The bloodrush activation will not adhere to the Sphere of Resistance ability from Thalia. We still get +4/+4 for

, even when our opponent's removal spells start to cost

. First strike also synergizes will with Rancor, our pump spells, and Sublime Archangel.

Last we have Selesnya Charm, a card whose importance will increase dramatically with the release of Gatecrash. Remember, there happens to be a certain 5/5 Ghost Council that really wants to be incurring 9-point life swings every turn.

Once we put it all together, the deck looks like this.

This deck would be a blast to play. It has many explosive draws that will leave opponents dizzy with confusion as they lose on the third turn. All of the cards here make Ghor-Clan Rampager better, and it's already quite good.

Next week, I'll be back with another Gatecrash preview and the newly updated January Standard Deck Compendium. Be sure to keep up with all the Gatecrash previews here on DailyMTG.com and don't forget to look up your local Prerelease location to reserve a spot and be part of the action.