Rebounds and the New Old Kid in Town

ever one to bury the lead: 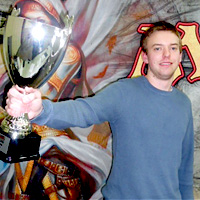 Costa's was the only Delver in the Top 8, as well as the eventual winner. And despite the standout performances of the Drogskol Captain and Spirits version at Pro Tour Dark Ascension, Costa's performance came with the old faithful version: straight white-blue with Equipment.

Delver is, more or less, as Delver was. The deck is a super-tight white-blue aggro-control with only twenty-one lands. Costa's list (all Delver lists, really) rely on the Comer Xerox model in terms of mana. Not only are the cards in the deck very inexpensive, but with four Gitaxian Probe, four Ponder, and two Thought Scour, the deck plays like it has about twenty-six lands (though early-turn mana is often spoken for).

The Delver deck can get overwhelmingly powerful draws. Turn one Delver of Secrets, turn two double Delver (it's happened!) can put an opponent away with the speed of a combo or Sligh deck. Less ridiculous outliers (say, "just" turn one Delver of Secrets) can put an opponent on a serious clock while managing the other player's board with backbreaking instants like Mana Leak or Vapor Snag.

In addition to Gitaxian Probe, Costa has always been happy to lean on Phyrexian mana; Gut Shot and Dismember give the deck functionality outside the typical blue and white; i.e., "killin' stuff."

Costa's PT sideboard had way more (or at least different) control elements (Consecrated Sphinx, Day of Judgment) but moved to Batterskull as a supplemental threat and source of lifegain (in place of the third Timely Reinforcements). A big addition adopted by many decks was Corrosive Gale. Corrosive Gale is a card that any deck willing to pay 2 life for Phyrexian green can play... to smash Spirits.

Surprisingly, the straight Delver deck doesn't have that many flying creatures. Delver of Secrets lacks flying half the time, and no other creature cards in the deck fly (save Moorland Haunt tokens). Newfangled Spirit deck though? Lingering Souls... Drogskol Captain... Dungeon Geists...

Can Corrosive Gale be the new Dismember?

Blue-Black Control was one of the big stories of GP Baltimore. Had the last match gone the other way, in favor of Dave Shiels (Shiels was the winner, last year, of the 32 Preordain/32 Jace, the Mind Sculptor GP at the height of CawBlade, you might remember), it might have given an even more dramatic narrative.

Even given Costa's impressive finish with White-Blue Delver, the list of players with Blue-Black Control in tow was anything but unimpressive, with "Geist of Magic Present" Paulo Vitor Damo da Rosa one of three players with the strategy playing in the Top 8. 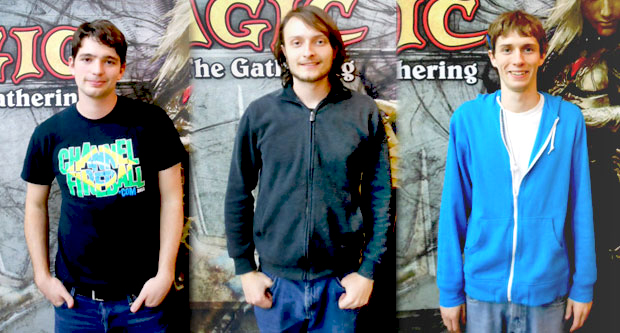 All three decks had a surprising amount of elements in common:

So what about those finishers?

Shiels commented that Consecrated Sphinx (a two-of in his main) won him the most games in the GP; PV played none of those (opting for double Grave Titans instead). Max played one of each (again, along with a Sorin starting and the only Karn of the Top 8 on the bench).

One thing to note: Shiels played Go for the Throat over the more commonly chosen Doom Blade... Which just happens to be a mana effective (if somewhat incomplete) solution to an opposing Grave Titan.

3 Liliana of the Veil 1 Sorin Markov 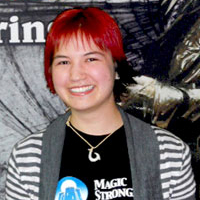 Earlier, we said there were no Red-Green ramp decks in the Top 8 of GP Baltimore, but Jackie Lee was able to significantly improve upon her PT Dark Ascension finish with a Top 4 and consequent invitation.

Her deck is quite a bit different from most decks we have looked at so far in this format.

Although her deck plays Green Sun's Zenith and a bit of acceleration (four copies of Birds of Paradise and four copies of Llanowar Elves), it isn't a "ramp" deck. And although it plays Inkmoth Nexus and Kessig Wolf Run, there is nary a Primeval Titan to be seen.

The deck has some silver bullet capability (one Acidic Slime, one Daybreak Ranger, and one Thrun, the Last Troll), but much of its feel is reminiscent of the Mono-Green Aggro deck with Strangleroot Geist. The deck even has more haste than that, adding Hellrider as a powerful—and speedy—compliment.

Like the ChannelFireball Wolf Run deck from Honolulu, Jackie Lee's red-green utilizes the brand-new Huntmaster of the Fells as one of its primary offensive tools. Available both as a silver bullet and as a redundant four-of, Huntmaster of the Fells is a powerful racer given its abilities to not just gain life but both make and murder monsters.

Lee's deck has many solid lines of offensive play. Strangleroot Geist is one of the strongest cards in Dark Ascension. You can cast one on turn two or Green Sun's Zenith for it on turn two or three. Or you can open on Birds or Elves and drop a Sword on turn two. At that point, you can just line up the Sword with whatever and rumble very quickly.

This deck is fast enough to put pressure on most decks in the format; Hellrider and Huntmaster of the Fells give the deck some reach... as does Galvanic Blast. With a couple of Inkmoth Nexus and the many Swords, Galvanic Blast can go absolutely Brian Kibler with metalcraft.

4 Honor of the Pure 3 Angelic Destiny 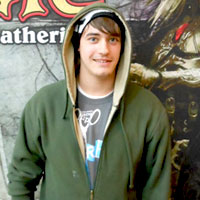 He played blue, but main deck it was just for Moorland Haunt activations (although sideboard we see Mana Leak and Mental Misstep).

The big moves were in two-drops: four copies each of Loyal Cathar and Thalia, Guardian of Thraben. Given the popularity of Liliana of the Veil or Tribute to Hunger in the surging blue-black, Loyal Cathar makes for quite the second Doomed Traveler.

Snook separately credited Thalia, Guardian of Thraben as one of the big successful cards of his list. Thalia steals turns from slower decks, making Rampant Growth or Liliana a turn later, while beating substantially.

2 Sword of Feast and Famine 4 Mortarpod 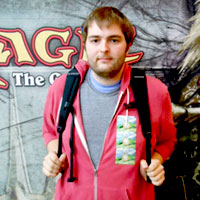 Matt Scott's Blue-Black Zombies is one of the first looks we have at what should prove to be a very exciting archetype. With Diregraf Captain providing the boost, this Zombies deck is like the offensive twin to Drogskol Captain, Dungeon Geists, and their Spirit squad.

Zombies is quick. Diregraf Ghoul and Gravecrawler—with or without Captain backup—are turn one Jackal Pup-type creatures. They have 2 power and only cost one mana. Worse yet, one of them (at least) is awfully persistent.

Skirsdag High Priest is secretly one of the most powerful two-drops in Standard. Turn one 2/X Zombie, turn two Skirsdag High Priest, turn three Mortarpod? You can quickly put yourself in the 5/5 Demon token business if this Cleric is left unchecked to an untap.

The Zombies deck has lots of potential morbid to help set up Tragic Slip, as well as the High Priest. It can toss creatures around and get them back, like with Gravecrawler (or with the undying on Geralf's Messenger).

Meanwhile, it can smash the opponent for an extra point with Geth's Verdict or try to take control via the generally underplayed Phyrexian Obliterator.

...Do we finally have a card that can make Obliterator look good?

Poor Eric Meng... 26th place at Pro Tour Dark Ascension (where the invitation cutoff is Top 25); now Top 8 at Grand Prix Baltimore (where the cutoff is Top 4). Rarely have we seen such solid performances... with nary a blue envelope pocketed (so far). 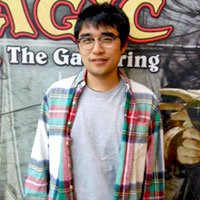 There are lots of variations and generally good draws (Mulch can fill your graveyard, or you can just play another accelerator on turn two to hard-cast Unburial Rites), but the clear thing is that in terms of the intersection of power and speed... it is hard to argue with Frites. The deck has an eight pack of creature-hating finishing fatties, and the eight nine-pack of Birds, Elves, and Avacyn's Pilgrims give the deck the capability to hit that third-turn reanimation.

Along with Zombies, Frites is a new-ish archetype you should watch in the coming months. It has a lot of the power we see in the Wolf Run or blue-black decks, but gets there faster. Moreover, quick Grand Cenobites and Inferno Titans are just spectacular against any kind of fast creature deck. No Insectile Aberrations or random Humans are likely to live.

With Frites now establishing itself in the mix, we have quite an interesting Standard cocktail that includes a kind of combo deck. Blue-black's rebounding gives us a solid control. We have never hurt for aggro representatives (Humans probably being the highest profile, but this would also include Tempered Steel, Red Decks, and so on). And we have been spoiled by CounterSliver (that is, Delver) and Tinker (Wolf Run Ramp), giving us quite the metagame polygon.

The question is... What's next?

Formats with lots of viable options tend to reward the most explosive utilizations of mana and raw power. Prior to this week's results, I would have guessed Wolf Run would best fit the bill, but I dunno... Frites looks like it might be a tad faster and just as Titanic. 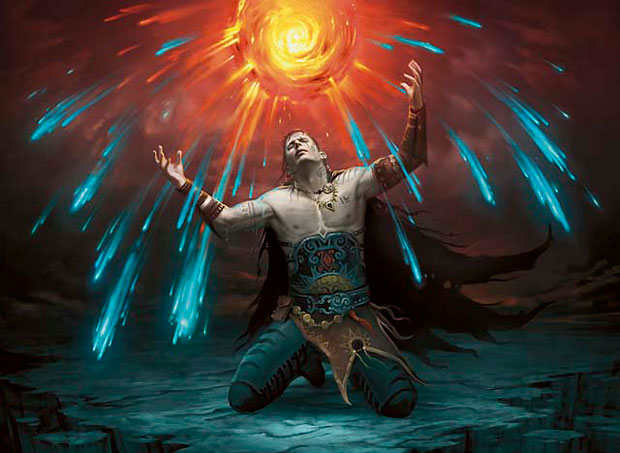 But when decks like those are good, you know what can be even better? Playing all four copies of Mana Leak (like Matt Costa and the blue-black players all did).

The Standard battles look to be increasingly unstable and epic!