Return of the Menace

ast week, Standard had hit a sweet spot. Just about every archetype was viable: Zombies, Ramp, Control, and Delver were all posting impressive results in the Magic Online daily events. There's a danger to diversity at times, though. The metagame had become too diverse for its own good. A few weeks ago, everyone's deck had been tuned to perform well against Delver strategies (creatures and Bonfire of the Damned). The decks aiming to beat Delver were very successful at doing so. They were so good at this that newer decks built to attack the decks that beat Delver started popping up (Ramp strategies). 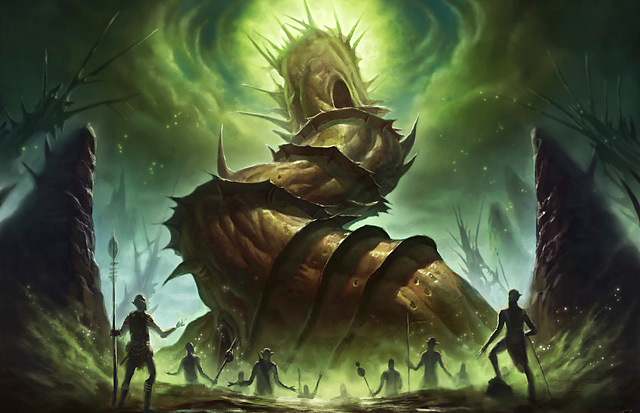 There were three categories of decks performing well in last week's events: Delver remained powerful based on its remarkable ability to play the tempo game and swing momentum in the blink of an eye. Another set of decks with a lot of creatures and many copies of Bonfire of the Damned were well-positioned because of their strength against Delver. The last group of decks were strong against non-blue aggro decks because they could stabilize, kill the opponent who couldn't recoup card advantage, or use a counterspell on a key card like Green Sun's Zenith or Sorin's Vengeance.

These three categories were somewhat evenly represented in the Magic Online metagame. Nimble minds can't help but analyze, so the savviest of Magic Online sharks decided to crunch some numbers. A bit of analysis shows that Delver has a much stronger chance of winning its poor matchups than Ramp, Control, or red creature decks. It's easy to pick Scissors when it has about a 40% chance of beating Rock.

Let's take a look at the 4–0 decks from last Saturday's Daily Events:

Delver is back on top in Magic Online Standard events. The only decks that come close are Naya Pod and Red-Green Aggro, usually with three or four copies of Bonfire of the Damned. Most of this week's 4–0 Delver decks look pretty stock, oftentimes similar to Yuuya Watanabe's Grand Prix-winning decklist. However, some Delver players decided to sacrifice a bit of their strength in the mirror to improve their matchup against the Bonfire/creature decks. Syrup16g included a few copies of Hero of Bladehold in the main deck. This simple two-card change massively improves Syrup16g's matchup against the Bonfire decks. Ponder and all the other cantrips in Delver make it easy to find a particular two-of when it's strong. Anyone who has played post-sideboard games with or against Delver will be able to speak volumes on the power that Hero of Bladehold brings to the table. Syrup16g presses the advantage against the Bonfire decks even further with the inclusion of four copies of Gut Shot. Here's a look at what Syrup16g played to a 4–0 finish in one of last Saturday's Daily Events:

Naya Pod decks are also enjoying a lot of success in the twilight of the pre-Magic 2013 Standard world. Most current Naya Pod decks include two to four copies of Bonfire of the Damned. The deck is well-equipped to handle most problems. Hero of Bladehold spells certain doom for most creature decks in Standard, but Naya Pod has access to Fiend Hunter and Daybreak Ranger. The deck goes big enough to beat most other non-blue creature decks, but stays small enough to withstand Delver's tempo game. Naya Pod has about an even, if not slightly favored, matchup against Delver, and it punishes the decks that aim to beat Delver. This deck seems like a great choice for upcoming daily events. The most successful Naya Pod decks have cut Elesh Norn, Grand Cenobite despite its unparalleled board presence. An Elesh Norn, Grand Cenobite is pretty bad in an opening hand and the deck needs to keep its curve low enough to compete with Vapor Snag + Snapcaster Mage. Here's a look at what you can expect from the latest versions of Naya Pod:

Aggressive red-green decks held their own as the format shifted drastically around them. These lists vary a lot from player to player, but the latest recipe for success seems to involve cutting the Sword of War and Peace and Sword of Feast and Famine from the main deck. The Swords are exceptional with the one-mana accelerators like Llanowar Elves and Birds of Paradise, but they allow Delver opponents to gain a tremendous tempo swing with a single copy of Vapor Snag. Swords still have a great amount of value in the sideboard, but some players have cut them entirely. DjTiesto tuned this Red-Green Aggro deck to be particularly well positioned against Delver, and the build is very similar to Martin Juza's successful Naya deck with a slightly better mana base and slightly worse power level:

4 Hellrider 4 Huntmaster of the Fells

The Pro Tour-winning Block Constructed Miracles deck hasn't had much success in Standard since its inception, but various lists have been emerging as of late. The deck struggles against Delver, but its strength everywhere else makes it a great choice if you're not expecting a lot of Delver at a local event. In Standard, the White-Blue Miracle deck has access to a number of powerful Planeswalkers, allowing for big plays even when it isn't finding miracles. White-Blue Miracles is also the first Standard deck to take advantage of Visions of Beyond, a card that was expected to do great things, but never truly found a good home until now. Let's take a look at the White-Blue Miracles deck that probozzy01 used to 4–0 a daily event last Saturday:

Red-White Humans has the most aggressive potential of any Standard archetype. The deck has never been particularly popular, but the number of non-Bonfire board sweepers is at an all time low, putting this deck in a good position to win a lot of Standard matches. The deck is very cold to a topdecked Bonfire, but its best draws make it fast enough to shrink the Bonfire window of opportunity to two or three turns. I'm a big fan of this deck and feel like it hasn't gotten the love it deserved in this format. Let's take a look at T.Mingda's 4–0 Red-White Humans list.

Delver is back on top and a lot of the lists make it hard to attack using the normal methods. I recommend playing a stock Delver list or an aggressive deck that has access to Bonfire of the Damned. Make sure you side in a Dismember or two against Delver opponents in the coming week; you don't want to find yourself cold to Hero of Bladehold when you're down a game. Magic 2013 will make a splash on Magic Online in the very near future and we'll see the format evolve. 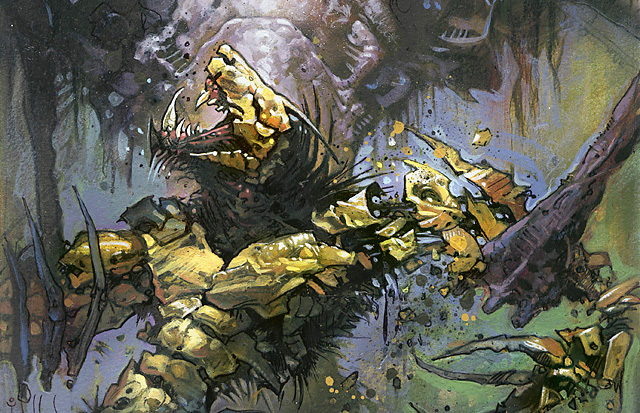 When we last checked in on Innistrad Block Constructed, the format was dominated by Black-Red-Green decks. The deck had become so dominant that is was extremely rare to see any player of note piloting any other deck. Things have changed, though, and the format has opened up a bit in response to the homogenous nature of the Black-Red-Green deck. Let's take a look at what decks managed 4–0 finishes in last Saturday's Daily events:

This is a far more diverse Block Constructed metagame than we've seen in recent weeks. The Black-Red-Green deck is still dominant, but players are finding ways to gain an edge against them. My favorite list from this week comes from Typhodious. It's very similar to the Black-Red-Green decks we've been seeing a ton of, but it cuts underwhelming mirror cards like Garruk Relentless and gains access to Amass the Components, a card that breaks the mirror wide open. Making headway can be difficult in the mirror because the deck has a strong enough suite of answers that both players end up staring at each other, unable to make any progress on the board. Amass the Components breaks that stalemate, allowing the pilot to go three deep and cash in an excessive land or unnecessary card. This seems like a great way to break the mirror in the last days of the Innistrad Block Constructed format, so let's take a look:

2 Falkenrath Aristocrat 3 Huntmaster of the Fells


I've wanted to build a Blue-Black-Red Control deck for a while now. I was never confident in any list I had built and ended up writing the deck off as too inconsistent to do anything, despite the huge number of bullets available against the Black-Red-Green deck. This week, Lord_Ehri made a splash by 4–0ing a daily event with a Blue-Black-Red Control list. The deck plays an incredible card advantage game and finds unique answers to specific problems presented by the format. I thought control was impossible in this format because the midrange decks would simply Devil's Play for the win if the game went long; Lord_Ehri solved this problem by including a couple of Witchbane Orbs in the main deck. The deck is powerful and ready for all angles of attack. Here's the list:

Black-Red-Green is still the deck to beat, but there are a number of advantages you can give yourself in an effort to improve the mirror. I would play something like Typhodious's deck if I were going to play Innistrad Block Constructed in the coming week.

Remember, there's only one more weekend of events on Magic Online before Magic 2013 is released. Don't miss your last chance to do well in any given format before the game changes!

I'm still receiving a lot of great feedback and I'm trying to make this column into what the readers are looking for. Many have requested that I play a few matches with some of the most interesting/successful decks and record match reports. I'm going to sync this new column feature with the release of Magic 2013. Be sure to leave feedback on the forums or shoot me an email with any questions or comments on how you feel this column could be improved.