elcome back to Perlious Research, DailyMTG.com's exclusive Magic Online column. Standard seems to have been shrouded in mystery since the release of Return to Ravnica. Now, with the data acquired from Magic Online events, we're finally able to take an objective look at the new metagame.

The new Standard is a tough cookie to crack. Geralf's Messenger decks of all varieties seemed to dominate the format in the first two weeks. Hyper-aggressive black decks were being played by so many people that most lists looked pre-sideboarded for the Zombie matchup last weekend.

Things change quickly, though. The brewers of the world quickly caught on to the staleness of the format and suddenly there were herds of Thragtusks stampeding all over the Zombie decks. That's where we are now. Thragtusk has become the format-defining spell and players are being forced to build their decks accordingly. 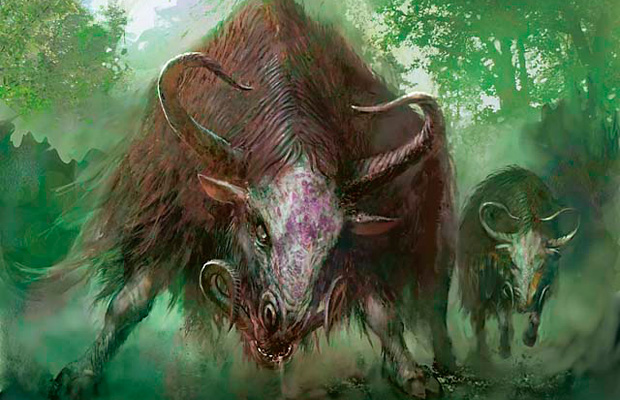 Here's a breakdown of the 4–0 decklists from October 19–21 by archetype:

Jund Midrange decks are the big winner this week. The new big dog on the block is similar to the dominant strategy from Innistrad Block Constructed. The deck aims to grind out opponents with efficient removal and transition into a deck that piles on bomby monsters in the mid- to late game. All of the lists are very different, but there are a few commonalities that should make the deck recognizable. Four Thragtusks is a must in a format where mono-red and aggressive Geralf's Messenger decks are enjoying some degree of success.

Olivia Voldaren is also being seen in some number across the board. Now that Lightning Bolt is gone from Standard, 3 toughness is the new 4 toughness, and Olivia Voldaren is the type of card that can completely dominate a game when an opponent gets caught without an appropriate removal spell. Underworld Connections proves itself to be Constructed worthy, finding its way into most lists. Let's take a look at one of the 4–0 decklists from last weekend's Standard daily events:

i_b_TRUE's list seems to be exactly what I'd want to play in a relatively unknown format. The deck has answers to just about everything and it forces its opponents to play a long game, which will inevitably be taken over by Olivia Voldaren or Underworld Connections. The deck struggles with some of the newer ramp strategies that people are playing, but the incredible matchups everywhere else and the deck's natural resistance to any kind of hate make it an excellent choice for the upcoming Standard season.

Jund Midrange was a reasonably obvious deck for the new format, given its success in the previous Block Constructed season. The next most successful archetype was made possible by Return to Ravnica's deceptively powerful Grisly Salvage. Unburial Rites has been used and abused since it first entered the fray of Constructed last year, but the latest version of the deck seems to be more consistent and less combo-driven than its predecessors. The newest Unburial Rites deck plays enough ramp to reliably cast Thragtusk by turn four. The deck takes advantage of Standard's newest default top-end, Angel of Serenity. Angel of Serenity had been popping up in a lot of different lists and this deck seems to abuse it more than any other. Here's an example of one of the 4–0 lists from last weekend:

HyenaCJY's version of the deck is incredibly powerful. Garruk, Primal Hunter provides a steady stream of board presence and unparalleled card advantage when the deck encounters a board stall. Angel of Serenity will often allow the deck to alpha strike for lethal damage, but the card can often be used to grind out wins against Jund Midrange opponents. When playing against decks with tons of removal it's usually correct to remove a bunch of your own creatures from your graveyard to get some free card advantage if your opponent happens to have the necessary Dreadbore to deal with your Angel. This deck has no obvious bad matchups in the current format and the list is surprisingly resilient to hate. Cards like Rakdos Charm might help stop the Unburial Rites, but the deck's normal game plan can often be enough to close a game all by itself.

Some players have opted to play red in their Unburial Rites decks. This gives the pilot access to Mizzium Mortars; Huntmaster of the Fells; Faithless Looting; and Gisela, Blade of Goldnight. Sai199orz managed to go undefeated in multiple daily events this past weekend using this version of the deck. The deck might look like it's sacrificing consistency for power, but the Faithless Lootings actually improve the deck's ability to reliably do broken things very early. This 4–0 version of the deck aims to close the game out much faster than the non-red version:

2 Huntmaster of the Fells 2 Sever the Bloodline

Aggressive strategies are being put to the Thragtusk test and, for the most part, they're failing. However, a few copies of Mono-Red and Black-Red Zombies still managed to post undefeated records last weekend. Let's take a look at some of these 4–0 lists and discuss some of the changes that we've seen in the aggressive game plan:

Aggressive red strategies have been lacking the necessary number of one-drops needed to be competitive, but Return to Ravnica's Rakdos Cackler provides the deck with another powerful one-mana creature to more reliably start some quick aggression. Pyreheart Wolf makes an appearance in Mono-Red as a very reasonable plan against the Thragtusk metagame. I wouldn't be surprised if we started seeing more copies of Pyreheart Wolf in the main deck of red decks in the coming weeks. The most aggressive archetypes of the new format have their backs against the wall in a world of Thragtusk, but it looks like they're adapting. I wouldn't be comfortable trying to race from 20 to 0 when everyone is gaining 5, but these decks are well-positioned to make a comeback if the herds of Thragtusk start moving on to greener pastures.

Standard seems to be dominated by midrange decks at the moment, and if Delver of Secrets taught us anything, it's that a good tempo strategy will always be well-positioned in a midrange format. I've ran into a few Red-White-Blue Tempo decks this week in the heads-up queues, and I was surprised to only see a single copy of the deck in the 4–0 club. The deck is a lot different than what you might expect, so I'll start with a list:

If you're worried that Standard is about to be about board stalls and a race to the first unanswered Angel of Serenity or Olivia Voldaren, then this deck is your savior. The deck gains an early lead with cards like Geist of Saint Traft and Snapcaster Mage, and aims to keep the opposing board empty with efficient counterspells and cheap removal. Thundermaw Hellkite lets the deck bash through Lingering Souls, a card that is otherwise extremely difficult for the deck to beat. Azorius Charm is extremely versatile and, in combination with Snapcaster Mage, makes the game a nightmare for your opponent. It's just too hard to play around. I wouldn't be surprised if this deck made some waves in the coming week thanks to its better-than-even matchup against Jund Midrange and Unburial Rites decks.

One of the most exciting cards for the new Standard from Return to Ravnica is Jace, Architect of Thought. The card is being utilized by some of the more eclectic ramp decks and a lot of Bant Control decks. Don Juan Quixote's Bant Control deck is a fine example of a power archetype—a deck that plays exclusively powerful cards with minimal synergy and relies on the strict power level gap between the cards in his or her deck over the opponent's. Here's the list:

This deck seems like a great place to be in the coming week. It doesn't do exceptionally well against the Jund Midrange decks in Game 1, but its Game 2 and 3 plan is very reasonable and should be good enough to make the match about even. The Unburial Rites matchup is also mediocre in Game 1, but becomes very good post-board. This deck does well against a tempo or aggressive strategy, so I'd be sure to keep this one in your back pocket for when the format oscillates in that direction, which could be as early as next week.

Return to Ravnica is in full swing on Magic Online. The Standard format is still ripe for the breaking and everyone seems to be getting their footing. The introduction of a new set is a great time to hop onto Magic Online and improve your skills. Everyone is starting fresh and there's no reason why you can't temper yourself into the best Magic player you can be. Go forth! Play Magic!