Right in the Gut

agic 2013's release events are in full swing on Magic Online. The new Standard metagame is beginning to take shape. This week, I'm going to focus on the changes we're beginning to see in popular Standard archetypes and highlight some of the most interesting decks that went undefeated in last Saturday's daily events.

Surprisingly, the card that seems to have gained the most from Magic 2013's release is Gut Shot. Gut Shot was commonly seen as a two-of in most White-Blue Delver lists previous to Magic 2013's arrival. Now, it seems like almost every Delver list is playing three or four copies in the main. Gut Shot's newfound strength is far-reaching. The card is being played in some number by most decks that play Snapcaster Mage and it's even being included in most Naya Pod and Black-Red Aggro decks. 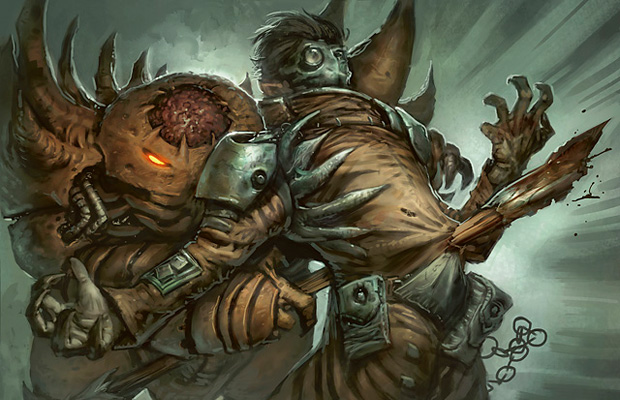 Why Gut Shot? Gut shot is obviously good at dealing with turn-one Delver of Secrets, but it's true strength is against the non-ramp green decks. Decks like Naya, Elves, Red-Green Aggro, and Mono-Green are very dependent on their Birds of Paradise, Avacyn's Pilgrim, or Llanowar Elves. The current Standard environment doesn't provide these decks with many strong two-mana creatures besides Strangleroot Geist. Gut Shot costs zero mana and manages to put a lot of decks behind by a full turn. Gut Shot was often sideboarded out in Delver mirrors, but Runechanter's Pike is getting a lot of love recently, making Gut Shot far less embarrassing in the midgame.

Delver's inclusion of four Gut Shots has done a serious number on the green decks playing one-mana acceleration creatures. Red-Green Aggro and Naya were tier-one decks just one week ago, but now it's very clear that newer versions of Delver that include Augur of Bolas and four Gut Shots are pushing these green decks further down the ladder in terms of viability.

The kinks are still being worked out in many of the newer archetypes and the latest versions of Delver had a dominating week in Magic Online daily events. Here's the breakdown of decks that went 4–0 in last Saturday's daily events: 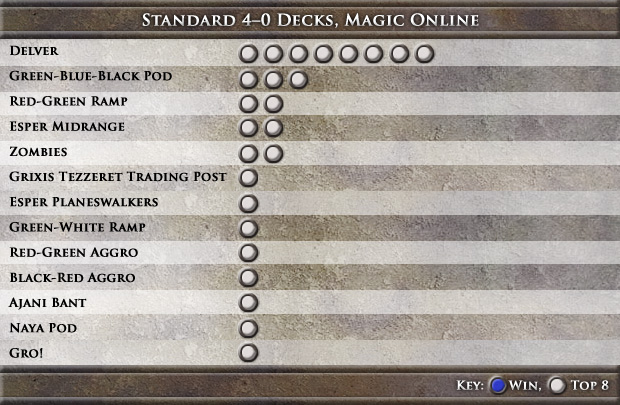 Delver has consistently done well recently, but these results go above and beyond the status quo. I've already touched on some of the changes we've seen in Delver decks, but I'd like to take a look at one of the 4–0 lists from last Saturday and break down the changes we're seeing in the most dominant Standard archetype:

This list is an excellent example of what you need to expect when playing against Delver in the coming week. Runechanter's Pike has, once again, become the Equipment of choice for Delver players. Augur of Bolas gives the deck added strength against Strangleroot Geist and Zombies, while providing a nice boost of card advantage. Sleep is a card I've seen in a few White-Blue Delver sideboards. Sleep is especially strong in versions of the deck that play Geist of Saint Traft (for obvious reasons); casting Sleep with a Vapor Snag in hand is almost always going to end the game if you have any sort of board presence.

Delver might be dominant right now, but there are a lot of new decks that are looking to steal the spotlight. Green-Blue-Black Birthing Pod decks are a relatively new creation; not many players are playing this deck and it still managed to have the second most 4–0s last Saturday:

It's not fair to call this Zombies, but the deck does play a lot of Zombies. This deck has a lot going for it. It can be incredibly aggressive with cards like Gravecrawler, but it becomes strongest in the midend game. It's incredibly difficult to beat this deck with any green-based creature deck; cards like Skinrender, Thragtusk, and Skaab Ruinator are too much to handle. Massacre Wurm functions similarly to Elesh Norn, Grand Cenobite, but the Wurm can often outright kill opponents if it's coupled with a Blood Artist. I wouldn't be surprised if this archetype became a major player in the coming weeks.

Trading Post is one of the best cards in Magic 2013, but its complexity makes it difficult to apply to such a new format. We saw a few Trading Post decks last week, but this week's lone 4–0 list is quite a bit different:

This deck is incredibly strong in a Delver-dominated metagame. This list hasn't gone all-in on beating Delver, but this many Whipflares and Black Sun's Zeniths will definitely do some work. The deck reminds me of the deck that Patrick Chapin piloted to the finals of Grand Prix Orlando. The deck's endgame is far and away the strongest in the format. I'm happy to see that Saul22 included four copies of Trading Post here. Last week, we saw a lot of lists that played two or three copies of the Magic 2013 artifact. It's becoming clear now that having multiple copies of Trading Post in play makes the game incredibly difficult for any opponent. I expect Trading Post decks to be a huge part of the new Standard metagame in the coming weeks.

The addition of Magic 2013 is spawning a lot of new archetypes. Ajani, Caller of the Pride is a card that had a lot of people talking. There's a lot of potential for the newest Planeswalker, but will it find a home? It looks like there might be some hope because Watchwolf92 piloted this spicy brew to a 4–0 finish:

Watchwolf92, Jonathan Sukenik in real life, is no stranger to Magic Online daily events. Known for Gravity Shifting and other unorthodox shenanigans, Jonathan isn't afraid to brew. This deck takes advantage of Thragtusk in a serious way and attacks opponents in a way that makes the game confusing and oftentimes frustrating. The deck is fairly straightforward with how it plays out, but it looks solid in theory. I'm excited to see what changes are made to this particular deck in the coming weeks.

White-Blue Delver might be the tempo deck of choice in the new standard format, but at least one player decided to blaze a new trail and experiment with the offerings from Magic 2013:

I haven't cast a Quirion Dryad in years, so I was pretty excited to see sr4fim's Dryad deck. The deck plays very similarly to Delver. Quirion Dryad is incredible in this type of deck, all the Phyrexian mana spells are huge for obvious reasons, and it's not unusual to attack with a 4/4 Quirion Dryad on the third turn. I decided to take this deck for a test drive and I played it in a few heads-up queues on Magic Online. A lot of you have asked for some match reports from some of the more interesting decks each week, so I'd like to share a match I played with this against Black-Red Aggro.

I played my Island and cast Ponder, leaving Quirion Dryad, Mana Leak, and another Island on the top of my deck. My opponent led things off with a Gravecrawler, which I wasn't happy to see because I had just lost a match to Mono-Black Zombies. 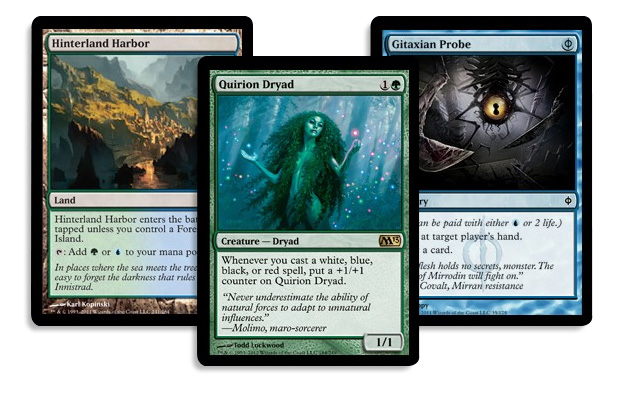 I drew an Island, cast another Delver of Secrets, attacked for 1, and cast Ponder—I drew Snapcaster Mage and left Mental Misstep and Thought Scour on top of my deck. My opponent played a second land and cast Butcher Ghoul. I revealed the Thought Scour and flipped both Delvers, attacked for 6, and passed the turn after playing Evolving Wilds.

Next week, I'll jump back into exploring the changes that Magic 2013 has had on some of the other Constructed formats on Magic Online. I'm still eager to hear your feedback on this column. Did you enjoy the match report? Would you like to see more match reports? Next week, I'd also like to play a sample match or two with a Trading Post deck. Be sure to hit the forums or shoot me an email with questions, comments, or suggestions.

I was very excited when I saw that Springroll85 went 4–0 in a daily event on Sunday with a Standard Battle of Wits deck! Here's the list without comment: