Welcome to Selesnya Week here on DailyMTG.com. Today, I'm going to take a look at two of the more overlooked formats played on Magic Online, Pauper and Legacy. We'll start with a look at the Magic Online Legacy metagame. The Magic Online Legacy metagame was full of combo decks a few months ago, but that all seems to be changing. Blue-Red-Green (aka "RUG") Delver decks and other more controlling brews are rising to the occasion and ruining the combo decks' chances at victory. I believe this could be the perfect time for a Selesnya uprising in Magic Online's Legacy landscape. We're going to jump into a full metagame analysis of Pauper after our Legacy discussion. Bushwhacker Storm is flexing its muscles again. Savvy players are packing Seismic Shudder and other similar effects, but it seems like the Storm deck has all the necessary tools to power through the available hate. Let's get right into it! 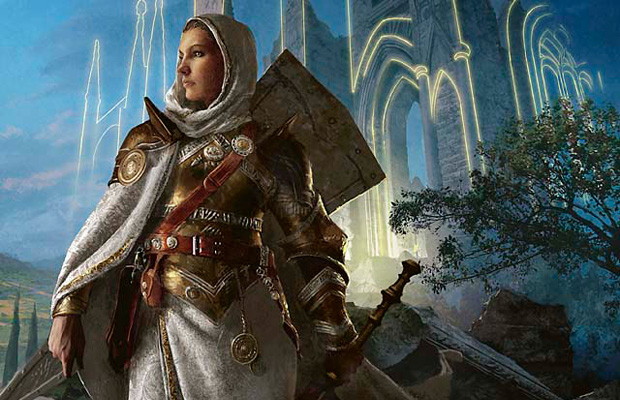 Knight of the Reliquary | Art by Michael Komarck

Legacy has become the second most popular Constructed format in paper Magic, only bested by Standard. However, many Legacy staples are difficult to acquire on Magic Online and the online metagame is still in its infancy. The format was dominated by Show and Tell, Storm, and Reanimator the last time we looked at it. However, the overwhelming prevalence of combo decks encouraged many Magic Online Legacy players to pick up decks like RUG Delver; these tempo decks are able to apply a lot of pressure while delaying or dismantling opposing combos with powerful disruptive elements like Spell Pierce, Force of Will, Daze, and sometimes even Stifle. Due to the small sample size of Legacy events, I've decided to do more of a format overview and less of "breakdown" styled commentary.

RUG Delver shouldn't be a stranger to anyone who follows Legacy; here's a list that went 4–0 in a Legacy Daily Event on October 1.


RUG Delver is a tempo strategy that has proven itself to be one of the biggest contenders in the Legacy metagame. The deck is able to apply a lot of pressure without spending a lot of mana. In fact, Tarmogoyf is the only card in the main deck that requires lazy5000 to have more than one land in play. The extremely low average converted casting cost of the deck allows RUG Delver players to mulligan very well. Also, you'll often see RUG Delver players just stop playing lands after their third or fourth and simply leave a fetchland uncracked. This line of play lets the RUG Delver player sandbag Brainstorms until he or she has two or more lands in hand; Brainstorm lets the player shuffle the excess lands away, while Thought Scour gets rid of them indefinitely and makes the deck more dense with spells. There are some strange cards in lazy5000's sideboard. Envelop seems a bit odd to me, but it can have a huge effect against a lot of combo decks. Rough // Tumble is one of my favorite pieces of sideboard technology for RUG Delver; Rough is perfectly positioned to clear the board of a swath of Merfolk or Goblins and leave every Tarmogoyf, Insectile Aberration, and threshold-activated Nimble Mongoose unscathed.

Other decks are putting up scattered numbers, but RUG Delver is truly the deck to beat in Legacy on Magic Online. It's difficult to beat a deck that's so tempo oriented: it can out-aggro the aggressive strategies and its disruption suite makes it very strong against control and combo decks. There is, however, a deck that punishes RUG Delver.

Selesnya might not seem like the perfect color combination for Legacy. With access to so many thousands of cards it would seem strange to pilot a green-white deck. Green-white has had its time in the limelight throughout the past few years, but cards like Brainstorm and Force of Will make it difficult for many Legacy players to pry themselves off of Islands. However, Maverick, a green-white creature control deck, seems to be the best answer to RUG Delver. Here's a Maverick list from a recent daily event:


tkgons's Maverick list is exactly what you want to be playing in Legacy right now. Selesnya proves that it can stand up to the toughest of formats and emerge victorious. Knight of the Reliquary is a huge beating against RUG Delver opponents; most of those lists will need Force of Will to prevent themselves from losing on the spot when Maverick casts a Knight. Mother of Runes is another card that will give RUG Delver players a really hard time.

Selesnya has a lot of power in Legacy these days. Older versions of the archetype would suffer criticism for their combo matchup. A lot of players have been slow to catch up, but Maverick decks, in their current form, have a very reasonable chance of beating the combo decks. The matchups aren't stellar, but they're certainly not unwinnable like they used to be. Dredge used to be unstoppable, but now, with the addition of Scavenging Ooze, it's pretty hard to lose. Storm decks were a headache, but Thalia, Guardian of Thraben makes short work of them. The deck has a lot of angles and finds interesting ways to win that seem to change from game to game. This makes the deck very difficult to sideboard against, often forcing opponents to simply stock their decks with cheap removal and not get caught naked by a Mother of Runes.

Legacy is gaining momentum on Magic Online and the format is fun and exciting. Playing Magic Online can be a huge competitive advantage against players who only play paper Magic. The sheer number of competitive matches a player completes will drastically improve his or her performance in a given format. I strongly urge players who wish to compete in Legacy to test themselves against the Magic Online crowd.

Pauper has become one of the more popular Constructed formats on Magic Online. Pauper decks have become very powerful and the lack of multi-situational/powerful disruption makes the format ripe for combo to rise to the top. Here's a breakdown of the decks that managed to go 4–0 in Pauper Daily events this past weekend:


Bushwhacker Storm has been the deck to beat in Pauper for some time now. The deck functions like many Storm decks before it. The goal is to create massive amounts of mana via Desperate Ritual and use it to fuel a long series of spells that ends with Empty the Warrens and Goblin Bushwhacker to deal tons of damage to unsuspecting opponents. The combo doesn't even require much storm. For example, let's say you have four lands in play and your opponent is tapped out with no available blockers—"Seething Song, Empty the Warrens, Goblin Bushwhacker, good game!"—that's not even very uncommon. The deck's superb power level makes it a format menace and forces others to play cards like Seismic Shudder just to stand a chance against a big Empty the Warrens turn.


Eight Post usually looks a lot different than this (although, to be fair, there are many versions of the archetype), and I'd like to show you a more stock version of the deck afterward, but this deck looks incredible to me. I wouldn't hate a single copy of Seismic Shudder of Yamabushi's Storm in the main deck as a Mystical Teachings target, but that's my only criticism of this beauty. The deck aims to control the game with tons of card advantage and mana advantage before it eventually wins with Kaervek's Torch. I love a grind, and this deck is just about the grindiest monster I've seen in a long while.


Newplan's version of Eight Post is my new favorite Pauper deck. This deck takes full advantage of Cloudpost's power with threats like Ulamog's Crusher and unstoppable card advantage like Mnemonic Wall and Ghostly Flicker or Accumulated Knowledge. Echoing Truth and countermagic give the deck a fighting chance against Bushwhacker Combo. This is definitely the deck I'm going to be playing in Pauper for the next few weeks.


Kiln Fiend is a lot more powerful than most people give it credit for. I have a friend who regularly does very well with Kiln Fiend in Legacy. This is an interesting kind of combo deck in that it's taking great advantage of the format's lack of spot removal. It might sounds crazy, but a single Apostle's Blessing is usually going to be enough to let a Kiln Fiend or Wee Dragonauts fly into the red zone for much more than 10 damage. The deck has a lot of good poke to follow up with, too. One of the most attractive features of this deck is the presence of Delver of Secrets, a card that has changed just about every Constructed format and should be well above par for the power level of the format.

Maverick is extremely well positioned for the coming weeks in Magic Online Legacy events. Pauper is still dominated by Bushwhacker Control, but Eight Post variants are beginning to find enough answers to compete. The diversity of Eight Post decks is incredible right now, and it's actually a lot of fun to come up with different Eight Post decks. I've only been thinking about it for a day and I've already come up with three new versions. Don't be afraid to jump into Magic Online Constructed—Pauper can be a great starting point as it has a reasonably low bar for entry.

My fellow electromancers in the Izzet Guild and I had a meeting last weekend to discuss our sealed strategy at the Prerelease. My first experience with Return to Ravnica was a lot of fun and the addition of guilds and guild packs made this Prerelease experience a great event. Be sure you don't miss the Return to Ravnica release events that will be happening all over the world this coming weekend!

PS: I tried a new layout for my Legacy discussion this week and I'd like to know what you think of it. Hit the forums or shoot me an email with your thoughts. Thanks!