Sleep with the Fishes

It was a surprising reunion of sorts, where long-lost Latest Developments author Randy Buehler and current Magic Online boss Worth Wollpert were both in town. We played a couple of Magic 2010 and Shards of Alara block drafts, generally had a great time, and ended up eating like five pizzas from Brian David-Marshall's favorite source of slices. I lost a lot in the Alara drafts, but M10 was just brilliant. I had never drafted M10 before but ended up with a Magma Phoenix / Fireball / Liliana Vess monster with three Tendrils of Corruption worth a clean sweep (even if my team lost). That wasn't the surprising part, though. 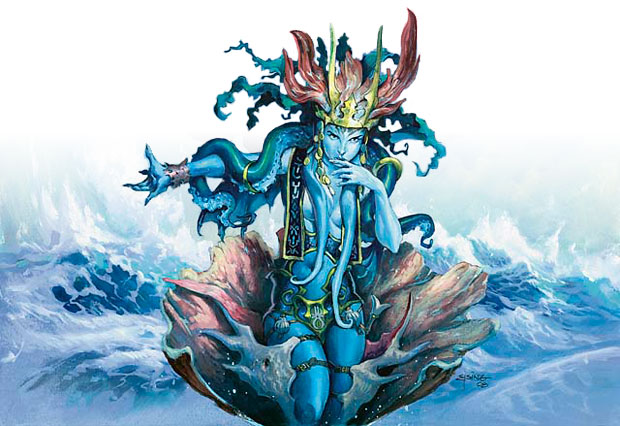 The following day was the last Austin PTQ in our area (the second in a pair of back-to-back Edison, NJ events), and even though I couldn't get away to try to follow up on my previous week's Blightning Top 8, a couple of our group's participants were going ... and both independently selected Merfolk! Asher Hecht (Top 8, Grand Prix–Los Angeles) and Gabe Carleton-Barnes (one of the four qualifying black-green decks at the Honolulu LCQ), two players who would be on any local short list to do well in the said PTQ, set down their Faeries and Faeries decks, respectively, to switch blue tribes ... without first speaking to one another.

Of course there was existing social proof in the form of the 2009 German National Champion, onetime Rookie of the Year and Pro Tour standout Sebastian Thaler:

So how does Merfolk work?

The current incarnation of Merfolk is a powerful aggro-control deck. That is, like Counter-Sliver long ago, it is a deck that can play out high-quality (if usually relatively small and quick) creatures starting about turn two. A creature in play is a clock, and in this deck of Stonybrook Bannerets and Silvergill Adepts, usually a Wizard.

The Merfolk deck uses its counterspells, therefore, to hold a lead. Cryptic Command and Sage's Dousing are one-and-a-half sets of Dismisses that can protect a lead either by protecting permanents in play or by stopping the opponent from playing cards to catch up. As such, more than a control deck like Five-Color or White-Blue Baneslayer, the Merfolk deck is a superb anti-combo choice. It can start beating down on turn three with Silvergill Adept, or—even more pertinent against combo players—Meddling Mage, putting the opponent on notice. He or she will have a limited number of turns to come back and win the game, and theoretically, a well-placed Cryptic Command or Sage's Dousing will keep that comeback from happening.

As a deck that begins with the initiative, but can then shift into an equivalent Cryptic Command zone that the opponent tries to settle into during the middle turns of a contest, the Merfolk deck is also very good against control opponents. The same principles that can topple combo apply; the Merfolk deck is initially faster on the offensive side, allowing it to generate board advantage (by however thin a margin). Decks that need a Baneslayer Angel in play to usurp the board positionally are going to have to commit five main-phase mana ... right into one of this deck's advantage-generating permission spells.

We initially described this incarnation of Merfolk as "powerful." I would direct you at this point to Thaler's full supply of Reveillarks. Reveillark is the kind of card that Demigod of Revenge does not want to attack into, and the kind of card that can serve as a kind of five- or six-mana baby Ultimatum... As an evoke spell, Reveillark can, say, put two bodies onto the battlefield and draw a couple of cards. When those cards can be dramatic threats like Sower of Temptation or Glen Elendra Archmage, Reveillark can be even more dangerous than usual; the most impressive of Elementals remains a superb blocker and better attack-intimidator.

Offensively the Merfolk deck rides the Lorwyn linear themes. The tiny Merfolk get bigger and better with Merrow Reejerey and Merfolk Sovereign, and faster with Stonybrook Banneret. 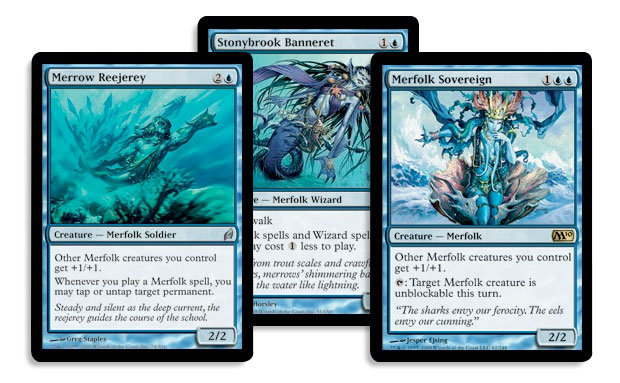 In addition to the addition of Merfolk Sovereign, Merfolk won big with the release of Magic 2010. The new M10 removal of mana burn aids Merfolk like no other strategy. Merfolk—as a blue deck with permission spells—wants to leave mana untapped to react (even when aggressively reacting) to the opponent's spells. However, the deck also runs Wake Thrasher as one of its primary "big spell" attackers. Now the Merfolk deck can tap out at the end of the opponent's turn, just to have permanents to untap the following turn. Previously the deck might risk mana burn if it attempted to power up Wake Thrasher in this way, or would at least expose Mutavault to removal (if Mutavault were there as a potential mana dump). But today, in the post-M10 universe, there is no downside to having a ton of blue mana in pool as the turns change over, a subtle bump for a newly popular deck choice.

The matchups against control and combo served Thaler well, as he beat three different Cryptic Command decks in the German Top 8 ... two Faeries and the Time Sieve combo.

But what about opponents with animals?

The historical weak point in aggro-control's armor has been "real" creature decks. You know, the kind that play creatures and attack you ... but don't necessarily hold back mana for counterspells once they have one or two threats on the battlefield (attacking you more instead). These kinds of decks can be problematic because they approach the metagame with similar speed to the Merfolk deck (or faster), but can sometimes present better (or at least larger) threats at the same mana costs. The active-to-reactive battle plan doesn't work as well if the Merfolk deck can't hold a lead it doesn't have; counterspells have a hard time generating a lead when the opponent already has it. That is, if the beatdown deck goes first, it will simply have the advantage initially, and the Merfolk deck will be spending its mana to cast, say, a 2/1, just so that it can fall behind at a marginally less dramatic rate.

Imagine, for instance, playing against a hot Kithkin draw, the poor Merfolk can be faced with a 2/2 that is a 3/3 upon first attack, then a trio of flyers ... when the Merfolk squad has maybe a total of a 1/1 or 2/1 from the second turn. How is the blue squad supposed to catch up with that speedy salvo? Reveillark is potentially a great blocker, as we said before, but that spell is five successful land drops down the line, and a game may have already gotten away from the Merfolk at that point. This is where a card like Sleep can prove its mettle (and where this article gets its name!). 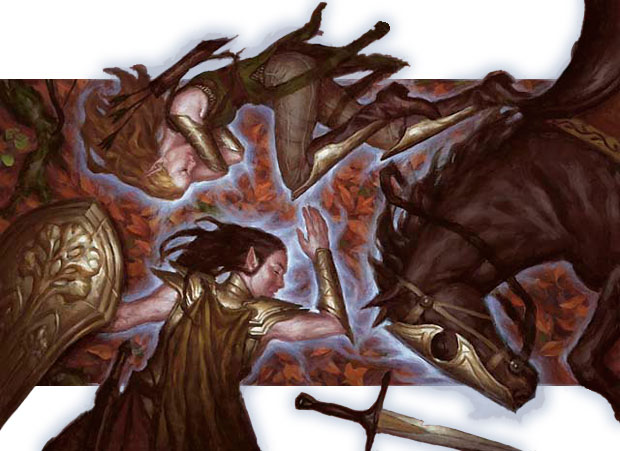 Sleep is a very interesting take on a creature-on-creature Time Walk.

When playing against another creature deck, Sleep can give Merfolk the space its needs to catch up from behind, or build sufficient power and tempo around Merrow Reejerey and Merfolk Sovereign to present an offense that actually matters. So much of creature deck–on–creature deck competition is racing, and that racing often hinges on how much power one of the decks can punch through with during its attack. Sleep gives the Merfolk deck a potential three-turn advantage when measuring by who is hitting whom. The first turn the Merfolk deck will tap down the opponent's creatures, opening him up for an attack; a resolved Sleep is convenient in that the Merfolk deck will not have to worry, in most cases, about how many little fishes to leave back to block. The answer is usually none: everybody is coming! That is the first turn; then, the opponent misses his attack (on account of all of his or her guys being tapped, and subsequently not getting to untap); that's turn number two. Finally, on the Merfolk player's subsequent turn, he is potentially going to have another wide open swing.

Sleep costs the same amount of mana a Wrath of God or Damnation, but seems less dramatically powerful. Yet Sleep is a card that is much more appropriate to a deck with twenty-six creatures. When a creature deck sided in Wrath of God in the past, it was necessary to let the opponent get a bit of a lead so that the sweeper became profitable (if you yourself had the lead, you would just end up blowing up your own guys) ... Sleep doesn't have this issue. You have essentially no disincentive in terms of committing to the board, and Sleep is synergistic with your offense as it halts only the opponent's, rather than potentially halting your attacks alongside theirs. 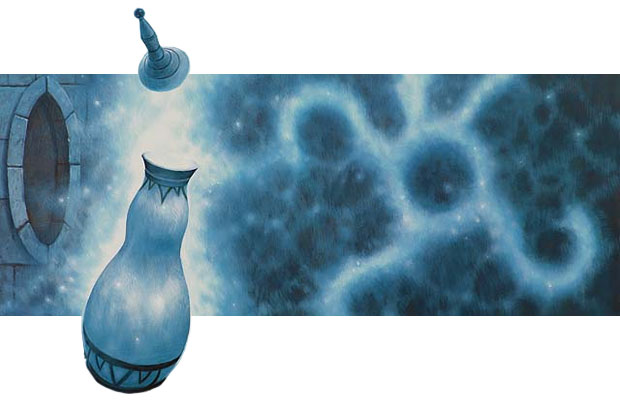 Now, of course the opponent can play something on that second turn between your Sleep-assisted assaults (even if all of those pre-existing guys were tapped down) ... but that's what Merrow Reejerey is for! If the opponent is only making one play to potentially slow down your two- (really three-) turn sequence, a Reejerey will usually be able to help you get past that with an opportune tapping. Moreover, its presence gives redundancy to the "offensive" school of Cryptic Command play. Even when the opponent has better creatures and a superior board position, Cryptic Command could always play trump card in racing situations. Sleep in these spots is just a better—if less flexible—Cryptic Command.