oday, I've got a preview card from Vintage Masters to show you, and with it comes a trip back through memory lane. This particular card has a special place in my heart, because it's at least partially responsible for getting me into competitive Magic to begin with. First, here's the card, in all its tricky glory: 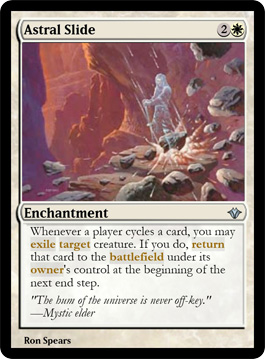 If you weren't playing ten years ago, it's likely you are unaware of how much of a Constructed powerhouse Astral Slide was. It spawned multiple different archetypes, all of which aimed to control the game by making the battlefield into a Slip-n-Slide, with creatures flickering in and out with abandon. Not only does Astral Slide let you stop opponents' creatures from hitting you, but you can retrigger your own enter-the-battlefield effects, flip up morphs (it was in Onslaught, after all), and save your creatures from removal.

To get a sense of what Astral Slide meant to me, the very first PTQ I ever played was in Onslaught Block, and was with the following list:


Using the one-two punch of Lightning Rift and Astral Slide to get full value out of the twenty-two cycling cards, Red-White Slide was an awesome nonblue control deck, a rarity even back then. What attracted me to the deck were all the insane tricks you could do with Astral Slide and Lightning Rift, because even before playing in a single tournament I was on the lookout for sweet plays to make.

Take a look at this excerpt from the finals coverage of Bob Maher against Eugene Harvey, where Eugene had out both Astral Slide and Lightning Rift, and Bob had out just Lightning Rift:

"Now Maher struck. He cycled a land at end of turn and after Harvey targeted his Dragon he shot the Angel. Harvey left the Dragon alone. Maher cycled again. This time Harvey targeted his Angel. Maher shot it, but before the Slide could trigger, he cycled again and shot the Angel. Harvey slid out the Dragon. Maher untapped and tapped ten, showing Decree of Annihilation!"

To break that down further, Bob cycled a bunch of cards at the end of Eugene's turn, using two things to his advantage. First, Bob can cycle, triggering Eugene's Astral Slide and his own Lightning Rift, let the 2 damage from Rift resolve, and before Slide saves Eugene's creature, cycle another card and have the same thing happen. It being Eugene's turn, his own effects will happen after Bob's. Because of that, Eugene had to settle for Sliding out Bob's Eternal Dragon, in order to stop Bob from hitting him for 5. Remember, it was the end of Eugene's turn, so the Dragon would remain exiled until the end of Bob's turn. Bob untapped, slammed Decree of Annihilation, and left both players with no cards in play, hands, or graveyards, except that Bob had a 5/5 flier coming back into play shortly.

Now that is how you win a Grand Prix, and reading about that sort of play got me instantly hooked into both competitive Magic and playing decks where I got to make plays like that.

As for my first foray into the world of PTQs: I lost playing for Top 8 to one David Ochoa, who has also decided that competitive Magic is a thing he enjoys. That didn't deter my enthusiasm, especially since David was (and is) a close friend of mine, and if you have to lose, losing to a friend isn't nearly as bad as the alternative. I would play in the rest of the PTQs that season, although I did switch to a sweet White-Blue Control deck, and from then on, I was pretty much hooked. I don't know how much Astral Slide contributed overall, since I suspect I would have found my way into competitive Magic regardless, but it definitely piqued my interest. I read about how cool the deck was and all the sweet tricks it could do, decided I was in for that, and went to the PTQ as a result.

Of course, Astral Slide's sweetness is certainly not limited to Constructed. Drafting with Astral Slide is also awesome, given that it has enough support. Because it's in Vintage Masters, I'm operating under the assumption that it's a draftable archetype, especially because all it asks is that you have seven+ cycling cards to go with it. It makes it so every cycling card saves your creatures from removal, stops opponents' creatures from attacking or blocking, and can play all sorts of tricks with good enter-the-battlefield effects. I'd have to see more of the set to know exactly how good the Slide deck is in Vintage Masters draft, but if it's a deck, I will be drafting it.

This might be the set I'm most excited for, and not even of sets that are only released online. I drafted a lot of all the Masters Edition sets (especially III), and Vintage Masters looks like a ton of fun. Giving us access to the Power Nine online and opening up an exciting new draft format is something I'm definitely anticipating, and I will be playing a ton once it comes out.

In non-Vintage Masters news, I've got a Pro Tour to play in, and as always, I hope to have good news when I'm back next week. Block Constructed got me in to the Pro Tour scene, and as fate would have it, tomorrow's Pro Tour happens to be Block, which I can only assume is a sign from the gods.