So These Are the Good Guys?

he world is strange.

Not in the "It's a strange world / let's keep it that way" sense of a British Lord of the Jungle's superpowered German daughter on Monster Island. Strange more like black and blue being the good guys.

You ever think about who we consider the good guys (at least versus "the bad guys")? No one ever wags their fingers at Naya. Naya, with their little green monsters and... not a lot else. Naya is the good guys! But swap white for black—all of a sudden we are talking about the most dangerous forces to ever pull young people towards underage drinking and smoking.

Speaking of which, a breath of fresh air:

VanMeter "only" finished ninth at last week's Star City Games Open (so just out of the Top 8), but he did so with a deck that is pretty different from most of what we have been looking at in Standard... at least since the rotation of Shards of Alara block.

VanMeter's deck is a Fauna Shaman deck. Fauna Shaman is there as a consistent two-drop, but one that can both set up Vengevines and set up bullets. Yes, the Vengevine package is weakened by the rotation of Bloodbraid Elf, but it is still a super powerful threat... and one that is once again well positioned in the format. A few months ago, there were nothing but Titans in every deck. Some decks even had eight Titans! Big 6/6 Titans were like walking stop signs for a speedy 4/3, and while there are still Titans in the format, there are fewer, potentially opening up a window for Vengevine.

VanMeter's Naya has all four copies of Stoneforge Mystic. Yes, Stoneforge Mystic has been a stalwart of Naya decks since Tom Ross and Luis Scott-Vargas's amazing Swiss run in San Diego, but Naya decks, especially Fauna Shaman versions, have rarely if ever chosen to run all four. Now, however, we see Naya borrowing from the success of white-blue and red-white archetypes with four Squadron Hawks and four Stoneforge Mystics. The improvement in Equipment—specifically the printing of Sword of Feast and Famine—has given Naya good reason to go this direction. Vengevine carrying a Sword of Feast and Famine? Don't mind if I do!

VanMeter broke a lot of new ground with this deck as well. Acidic Slime is there as an answer not just to Valakut, the Molten Pinnacle, but to the popularity of Equipment in seemingly every color combination. Ideally Naya will have Sword of Feast and Famine powering out more and more expensive dudes, and the opponent will have a buck-naked Stoneforge Mystic shaking its fist at that Acidic Slime.

Recent sets have set up Naya with some new bullets:

I'd be pretty surprised if this fresh deck didn't pick up in popularity over the next few weeks.

So we're starting with green, red, and white; time to move to black and blue.

I mean, really... This is our excuse for the good guys? Strange world.

1 Deprive 1 Into the Roil 4 Mana Leak

Though he was eventually taken out by StarCityGames.com Open Series hero Gerry Thompson with DarkBlade (Caw-Blade splashing Black), Kibler and his Blue-Black Infect deck battled to third place.

This is a remarkably inventive and surprisingly effective weapon of choice. 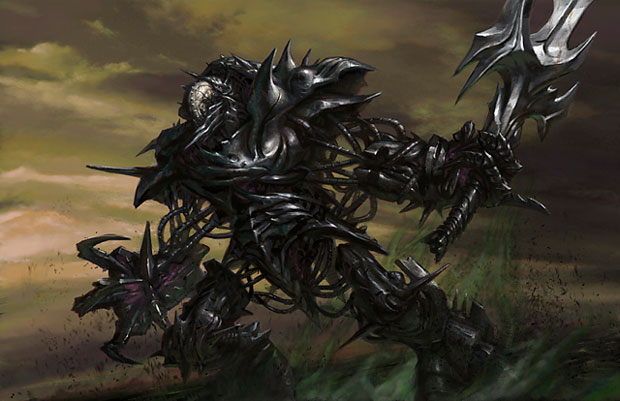 A huge incentive to playing this strategy is Phyrexian Crusader. The little black poisoner is remarkably well positioned in a format where seemingly everyone is playing four copies of Squadron Hawk and four copies of Stoneforge Mystic. They can't block, and you kill very quickly. Similarly, Boros-type decks with their Plated Geopedes and Goblin Guides can't get through, and can't... you know... block.

As awesome as Phyrexian Crusader and Skithiryx, the Blight Dragon are offensively, Kibler's deck is a bit light on offense. It's kind of like a Black-Blue Control deck that has opted to play Jace Beleren rather than Jace, the Mind Sculptor.

Even if you get past the superb positioning of Phyrexian Crusader, infect's unique positioning here really comes to the forefront when you consider the presence of Contagion Clasp.

In this deck, a single scratch from an Inkmoth Nexus can eventually fester into a lethal case of poisoning, given sufficient time. (Like I said before... this is the modern-day good guy?) But Contagion Clasp does a ton of other awesome stuff, too. 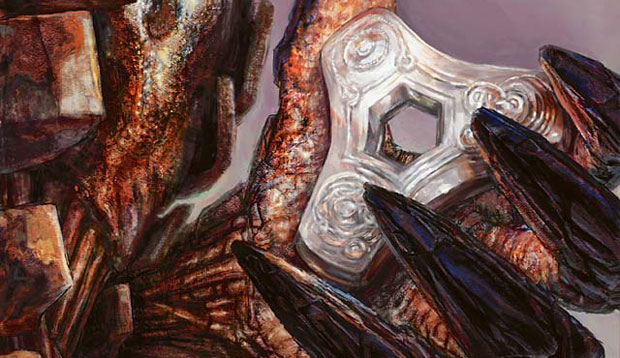 The power of Tumble Magnet in this format almost can't be exaggerated. Tumble Magnet shuts down mighty Titans and, more importantly given the supreme power of Stoneforge Mystic, locks down an opponent's Sword of Feast and Famine (plus another card, at least in the short term). The downside of Tumble Magnet is that it can run out of counters... but not with Contagion Clasp! Contagion Clasp not only increases the poison counters killing an opponent to death, but it can keep Tumble Magnet going indefinitely. There are other counter-driven permanents in this deck—e.g., Jace Beleren—so Contagion Clasp always has something to do (you know, after it gets done killing Lotus Cobra to death).

The StarCityGames.com Open Series may have given us some very interesting new decks to consider, but there was a Grand Prix going on last week, too! Innovation was going on everywhere, and even though the Grand Prix decks might identify closely with Caw-Blade or Valakut, the Molten Pinnacle, they represent some pretty amazing changes.

As with Kibler's Infect deck, the most significant names at the GP level would probably be associated with the controlling colors black and blue. Both eventual winner Martin Scheinin and famous control deck designer Guillaume Wafo-Tapa went with Black-Blue Control variants.

Martin went with a classic-ish Blue-Black Control deck with a full set of Tectonic Edges. I know that earlier we talked about a general drop-off of Titan frequency in Standard, but Martin's deck showed no shortage of 6/6 monsters for six, with Grave Titans and Wurmcoil Engines both.

Somewhat unusual for Blue-Black Control (especially with four Tectonic Edges) is a reduction of Spreading Seas from four to only two main deck, but that two-of is kind of counterbalanced by a pair of awesome Tumble Magnets. In a deck like Martin's—even without the proliferate mechanic—the Magnet can set up the opponent's creatures for Black Sun's Zenith card advantage. 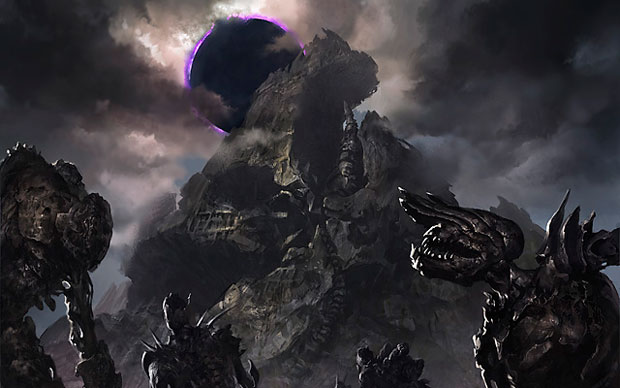 A card we will see again in this Top 8 is Liliana Vess. Today's Black-Blue Control decks can curve up Inquisition of Kozilek, into Spreading Seas or Go for the Throat, into Tumble Magnet, into Jace, the Mind Sculptor, into Liliana Vess... into Grave Titan! Each card is powerful, and many of them build into deeper and deeper control over the battlefield.

Wafo-Tapa's shell consisted of largely the same cards that Marin played, but instead of running four Titans and two Spreading Seas, he ran "just" the two über-reliable Grave Titans but all four Spreading Seas. Wafo commented that Liliana Vess was one of his best spells; he ran a second one in his Blue-Black Control list.

Blue-Red-Green remains one of the most popular decks in the Standard metagame. Though it is one of the (seemingly) few decks that lacks second turn Stoneforge Mystic and Squadron Hawks, Blue-Red-Green still has the mighty Lotus Cobra, that explosive Dark Ritual with legs (well, figuratively). 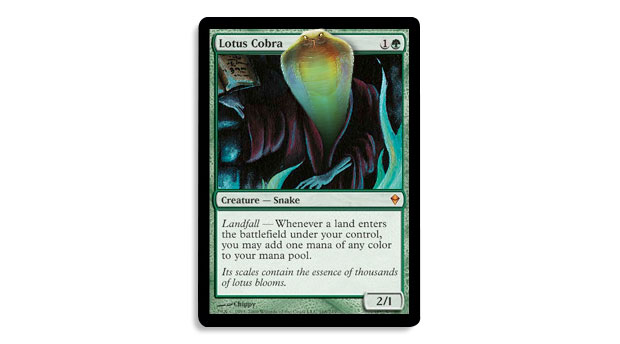 Blue-Red-Green can command from a diverse base of threats, the best in Titans (and continually chooses Inferno Titan), the best in planeswalkers, the lightning-quick Lightning Bolt, the ability to counter target spell, and... well... almost anything it wants.

Bland can spread threats and answers all over the table: one big Avenger of Zendikar, plus Precursor Golems (9 power for five mana), which Richard can cast on turn three off a Lotus Cobra. 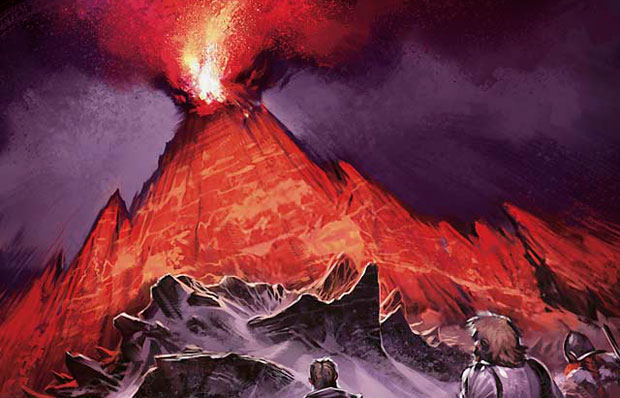 The onetime Standard boogeyman has failed to perform at its former levels since the printing of Sword of Feast and Famine, and has thus had to learn to adapt. Sword of Feast and Famine can get a little white creature in past any of Valakut, the Molten Pinnacle's Battlements, Titans, and Plant tokens, allowing especially White-Blue to crash in for tons of damage and leave back mana for countermagic.

So how can Valakut, the Molten Pinnacle adapt?

The answer is once again Tumble Magnet. Sajgalik's version can use Tumble Magnet to lock down a Sword-carrier and avoid much of the violence that Valakut, the Molten Pinnacle has lately been subject to.

Older versions of this deck relied on Lightning Bolts and other fast removal against beatdown decks. This version instead goes for Lotus Cobra explosiveness—including coming off a Green Sun's Zenith—to hit Titans aplenty.

Though Eduardo didn't run Lightning Bolts and so on, if he wants to kill creatures, he can. Tumble Magnet can force the opponent to commit more threats to the battlefield, opening up the avenue for Pyroclasm or Slagstorm card advantage.

Toni was a bit more aware of the Titan sub-game, with Act of Treason out of the sideboard for fast damage and some short-term positional gains.

I know that in the Vengevine portion of this article I talked about the recent gap in Titan play... and then we look at a bunch of Grand Prix decks with 4-7 Titans.

But the dominant life form in the Standard ecosystem for the past several months has been Caw-Blade and its associated variants... and Caw-Blade plays few if any Titans. Case in point:

2 Spell Pierce 3 Go for the Throat

1 Sword of Feast and Famine 1 Mortarpod

3 Duress 4 Inquisition of Kozilek 3 Go for the Throat

The first layer of innovation over straight White-Blue Caw-Blade post-Paris was the red splash.

The current dominant splash is black. Black gives the white-blue shell Go for the Throat, one of the most flexible spot removal cards in recent memory, as well as the various fast discard options—Duress and Inquisition of Kozilek especially—to interact with other big spell decks.

Nosowicz added Hero of Bladehold to the Caw-Blade threat mix. A pair of Baneslayer Angels in the side... but still no Titans.

2 Doom Blade 1 Go for the Throat

We're going to wind down this week's look at the newest in Standard innovation with Simon Bertiou's hybrid-hybrid deck, my pick for the most interesting and innovative deck among a whole mess of Black-Blue Infect, resurgent Naya builds, magnetic Molten Pinnacles, and Wafo being Wafo.

Bertiou hybridized not two, but three, distinct strategies that we have talked about in this column over the course of the last several months: 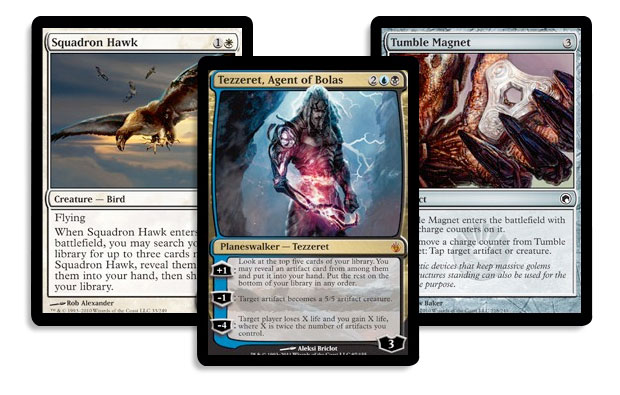 Despite the sometimes-seeming dominance of single archetypes, Standard continues to show us tremendous opportunities for innovation. I don't know if the coolest thing is that one of the highest-win-percentage decks in the format plays Jace Beleren rather than Jace, the Mind Sculptor, or that you can cram three different decks into just one stack of sixty.

In any case, there are some truly cool options for Magic Online play, Friday Night Magic, or upcoming Grand Prix. Have fun!