t's that time again! The Journey into Nyx Prerelease is just a few weeks away and everyone is salivating over exciting new cards. The preview season of a new set is our greatest opportunity to innovate. We're given the chance to be the first to discover exciting strategies that float in obscurity until we pluck them out of the darkness. Today, we'll be discussing Mogis and his tendency to bear... or bash... grudges. 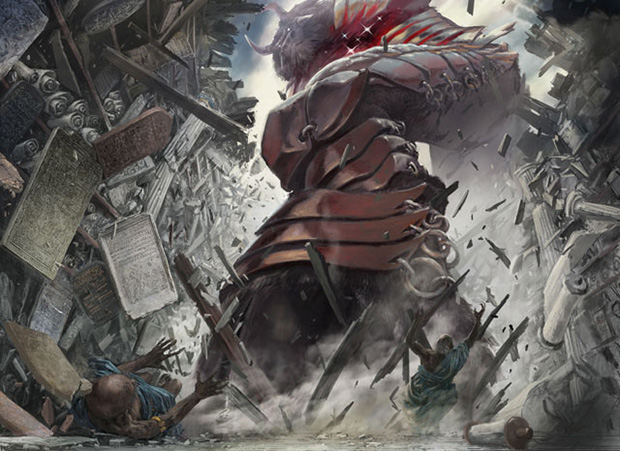 It can be difficult to quantify what type of deck we're best suited to be playing. Some of us enjoy being aggressive, some like to play control, others are combo pilots, and some of us—including myself—like to exist somewhere in the gray area between combo and something else.

There's something very satisfying about winning what seemed like a grindy game of Magic out of nowhere. Last year, I used a white-black-red deck with Blasphemous Act to win a PTQ. My deck had a lot of powerful cards and could win the game from many angles, but the opportunity to cast Blasphemous Act with a Boros Reckoner or two on the table for free wins gave me an escape hatch to win games that might have otherwise been out of reach.

We could afford to play Blasphemous Act in those decks because it was often a fine card on its own. We could essentially cast Day of Judgment out of our midrange creature deck if the opponent got too far ahead. Sometimes, we could even decline playing creatures, giving our opponent a window to play more guys, a bit of rope to hang him- or herself with, so that our Blasphemous Act could be that much more devastating.

Today's preview card has potential to be the versatile combo piece missing from Standard. We can use the card as an inexpensive removal spell, or we can use it to end the game out of nowhere if things go well. Let's take a look at Spite of Mogis: 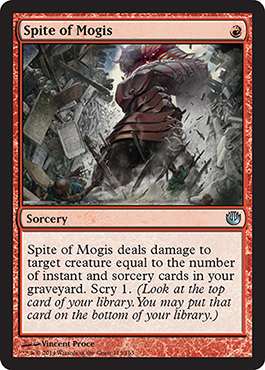 Cards like this are always interesting. On one hand, Spite of Mogis doesn't do much in the early turns of the game. On the other hand, it becomes a very efficient one-mana removal spell once we get to the midgame. When the dust settles and blows are being traded in one direction or another, it can be used to target a Boros Reckoner for the explosive finish that we've missed so much in this Standard format.

The card can also be used without Boros Reckoner in some decks. If we're playing a deck that's essentially all spells, then this can be a one-mana removal spell with scry that potentially deals with any creature in Standard except Obzedat, Ghost Council; Fiendslayer Paladin; Master of Waves; or those with hexproof. These decks can play Boros Reckoner in the sideboard for creature matchups and make their opponent explode in the endgame.

How should we build a deck with Spite of Mogis?

My first thought was to include the card in a Red-White Burn deck with Boros Reckoner and Chandra's Phoenix as the only creatures. It seems like a fine inclusion there, but we'll be forced to cut Chained to the Rocks, and a lack of card draw means that it will often just be a burn spell that can't go to the face.

Upon further reflection, we see that Spite of Mogis is best when played alongside blue. Let's see what a control deck using Spite of Mogis might look like.

Red-White-Blue Control decks haven't had a ton of traction in the current Standard format. Black gives players access to Thoughtseize and Temple of Epiphany (the blue-red scry land) hasn't been available until now. Red-White-Blue gives us a lot of inexpensive/powerful removal that can also be used to kill Planeswalkers and our opponent. We want to make our deck lean enough to dominate control mirrors. We can do this by playing a ton of countermagic over permanents that force us to tap out, blinking first in these matchups. 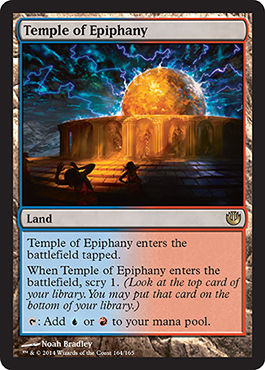 Lightning Strike is a great spot-removal spell that will help us deal with early aggression while also allowing us to finish the game in conjunction with a big Spite of Mogis targeting a Boros Reckoner.

Boros Reckoner serves as one of the very best cards against aggressive red strategies while allowing us to combo-kill opponents out of nowhere if the game goes long enough. This card is always strong, but it's at its best against people without black or white in their deck. We should remember to play this card aggressively against decks that might be packing Lifebane Zombie—we at least want to force our opponent to pay the mana for a removal spell.

Supreme Verdict is an obvious inclusion in our all-spell control deck.

Ætherling is probably the best alternative finish for a deck like this. We'll certainly be forced to play against decks like Black Devotion and we can't rely on backing up a Boros Reckoner with countermagic.

We can round out the deck with a bunch of countermagic and it ends up looking like this:


This deck seems pretty awesome, but it's not something that I would bring to a tournament untested. It would be interesting to see how Spite of Mogis might work in a red-white-blue deck that eschews creatures entirely. We don't have to give up on the combo entirely, though; we could always play Boros Reckoner in our sideboard for the aggro matchups.

I envision a deck that draws a lot of cards and grinds the opponent out of the game. We never have to tap mana on our own turn in most cases with this deck. This gives us a tremendous edge in the control mirrors and lets us play our cards optimally, with full knowledge of our opponent's plans.

We can finish the game with a nice, big Aurelia's Fury, one of the better cards in Standard that's not really seeing much play right now. We don't want to be targeting our opponent with any burn until the game has been locked up. We can throw all of our burn at creatures and Planeswalkers until that point. Once control has been established, Elixir of Immortality can be used to loop through the deck repeatedly, letting us finish off the opponent with burn spells.

Here's how I would build the Draw-Go version of Red-White-Blue:


Spite of Mogis has potential to be a powerful piece of the Standard removal cannon. Prerelease events for Journey into Nyx are at the end of this month (April 26–27). These events are great places to gather among fellow deck builders and cardslingers to discuss your latest ideas concerning Journey into Nyx. They help us sharpen our Limited skills, which will only improve our ability to play Constructed. Most importantly, these events let us be among the first individuals to play with the new cards. There's something magical about cracking the first pack of a new set. To be a part of this experience, it's wise to preregister at your local gaming store. Space can be limited at these events.

Next week, we'll be discussing a new card from Journey into Nyx that's sure to see Constructed play for the entirety of its legality in Standard! Don't miss it!