ast week, I took a look at one of the best beatdown cards I've seen in a while, and today I have a card from the other end of the spectrum. While I don't mind attacking for 2 if that's what's good, nothing is better than drawing lots of cards and never missing a land drop. If you want to succeed with a control deck, all you really want to do is play lands and gain life, which is exactly what today's card does (and quite effectively, at that): 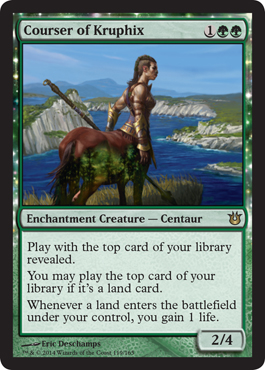 Of course, this immediately draws comparisons to another card that I loved playing with, and you don't need to be an oracle to decipher what it is.

Playing lands is great. Gaining life is great. Gaining life for playing lands for free might just be the greatest (although I wouldn't complain if we could tack on "draw a card" somewhere). It shouldn't be very difficult to convince anyone that Oracle of Mul Daya was insane, considering how often she showed up in Pro Tour and Grand Prix Top 8 lists. The most common pairing was with Primeval Titan, in the Valakut deck that did well in... basically every tournament for two years:

In the interest of full disclosure, I should admit that Courser of Kruphix wouldn't serve quite the same role as Oracle did in Valakut. Courser gives you extra cards by letting you play lands off the top, but one crucial difference between it and Oracle is that you don't get extra land drops to go along with the extra lands. As a result, this isn't the card you want when you are looking to ramp to six mana to the exclusion of all other goals, which describes every Valakut deck I've ever seen. That's not to say that there weren't Oracle decks that would have been interested in staying the course, such as the one that took Paulo Vitor to his Pro Tour victory:

Josh Utter-Leyton also made Top 8 with the same list, although much like other members of our team (not naming any names, especially mine), having to draft ended up not being quite as profitable as continuing to play Constructed.

This list uses Oracle of Mul Daya as a pure value card, and could easily have played Courser of Kruphix if that was an option. I won't dwell too much on some of the other cards that made this deck broken, since I suspect we won't have a Jace, the Mind Sculptor to go with our Coursers this time around, but the basic idea of the deck could easily be replicated.

Here we have an updated version of the deck Makahito Mihara used to make Top 8 at Pro Tour Theros, where Courser of Kruphix does a good job of bridging the gap. This deck has very few cards in the middle of the curve, and a three-drop is the exact right spot for a new addition. Courser does multiple good things for this deck, which is especially great considering how cheap it is.

The role it best serves is to protect you from aggressive decks, as a 2/4 blocker and as a source of recurring lifegain. Gaining 1 life may not sound like a lot, but it definitely adds up, and there aren't many removal spells that kill this on turn three. It also blocks extremely well, and given that this deck can drop it on turn two, makes it one of the best cards against mono-red or mono-white aggro.

Against non-aggressive decks, Courser provides a steady stream of card advantage. Even once you've gotten to the point where you don't need the lands, not having to draw them is as good as drawing a card, and this deck has a lot of good mana sinks. It's also very convenient that Domri Rade and Temple of Abandon interact well with Courser. Filtering lands off the top makes it more likely to hit with Domri, and vice versa. Temple adds another way to manipulate the top of your deck, and even gets played for free off of the Courser itself. All told, this deck has a lot of tools to gain card advantage, which isn't what you'd normally expect out of red-green.

Lastly, the fact that it costs

is actually a huge boon for the deck. Nykthos and Nylea both very much care about the mana symbols you have in play, and a cheap card that adds two to devotion is very helpful.

If Born of the Gods happens to have a few more ways to tinker with the top of your library, Courser could get out of control, and it already is a good start on a more controlling green deck. We haven't seen a green-based control deck since Thragtusk rotated out, but Courser looks like it could fit perfectly into a Sphinx's Revelation shell. The full set of Temples makes sure the deck has enough Scry power, and unlike Mihara's deck, a control deck wants to play twenty-six or twenty-seven lands. That, of course, makes my preview card quite a bit better, and the lifegain aspect improves as well.

While we will clearly have access to a number of new prospects come Born of the Gods, I'm pretty excited to build control decks around Courser of Kruphix. Playing such good defense while providing card advantage is exactly what I'm looking for, and it certainly trumps cards like Divination (which may be a necessary evil right now). One thing to note is that you will often want to play Courser a turn later than normal, just so you can play a land immediately off the top even in the face of a removal spell. This deck happens to have Sylvan Caryatid, which lets you cast Courser on turn three and get a bonus land, but it's something to be aware of whenever you are considering running out Courser without a land drop to spare.

Exciting times are ahead, and I look forward to see what other cards I get to play with alongside Courser of Kruphix, which I'll definitely be trying.