ommander is many things, but above all, it's social. 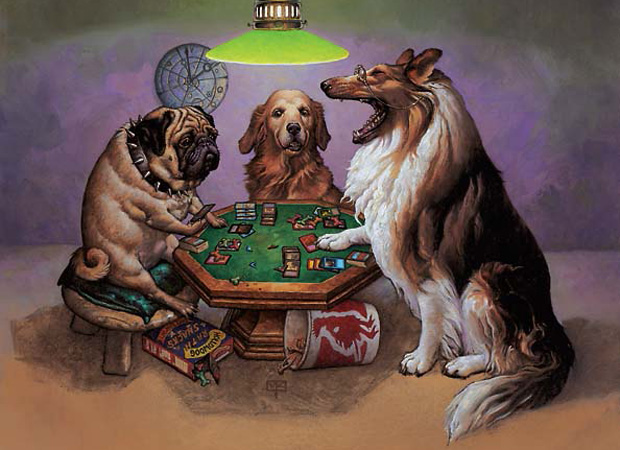 The format is maintained with multiplayer in mind, although it isn't simply to have more players. Adding players three, four, or more doesn't inherently make a game more interesting. In fact, it usually slows the pace down and can create moments of boring tediousness. Lands need to be tapped and untapped, after all.

What Commander does is add more players looking to create their experience. From choosing your commander to the cards and themes in your decks, Commander is much more than the sum of its extra player parts. It's the experience it helps us create that makes it such a fun format to play.

And it's your stories from playing that demonstrate it so well.

The most common type of Commander story you shared is best called the "Oops!" type, and it works like this:

Ronald shared one that I think we've all seen or performed in some way:

My friend Chris recently got back into Magic. With his new pool of cards, he built some Return to Ravnica–block Commander decks. He brought them to Grand Prix Providence, where we got into a player that I'll call John. Chris was playing Ruric Thar, and I borrowed his Niv-Mizzet, Dracogenius deck. I don't recall John's commander, but he was playing a proper deck full of powerful cards.

Several turns in, not much had happened; we each had a creature or two in play, and some scant combat damage had been dealt. Then John cast Armageddon, which went nicely with his Sol Ring. Fortunately, I had the perfect foil in hand; I responded by overloading Cyclonic Rift, which should have sealed the game for me, with all lands destroyed and everyone's permanents but mine returned to hand. John didn't like that idea, so he quickly countered my Cyclonic Rift... with Pact of Negation!

I blinked, then asked him how he planned to pay for his Pact. It took him a second, then he realized what he'd done, and we all cracked up.

I think we can all hear the "Oops!" from here. Mistakes happen, but they can work in our favor. Like many of you, I generally avoid "infinite" combos in Commander, but David's story about stumbling into one is something I've experienced first-hand:

I didn't realize I had an infinite combo in my Ulasht, the Hate Seed deck. I had my Ulasht out with a few +1/+1 counters, some Saprolings, and Mana Echoes out. I drew my Utopia Mycon, played him, proceeded to make some Saprolings until Ulasht died, replayed him with the extra mana floating from Echoes and used Mycon to get the colored mana I needed. I proceeded to repeat until Ulasht had been played 999,999,999 times, had over 1 billion Saprolings, and killed every creature my opponents had. I was prepared for victory when before the 1 billionth time I played Ulasht, one of my friends played Volcanic Fallout.

He had asked how many times I planned to do my trick and I told him 1 billion times, since infinite is not a real number. I had the mana to still pay Ulasht but no creatures on the board and no way to retrieve him from the graveyard, so Ulasht sat out with a casting cost of 2,000,000,000RG. Ever since then, Utopia Mycon has been viewed as enemy number one (since it provides the colored mana I need) and dies a quick painful death every time.

These types of midgame realizations are why so many of us dig deeper and deeper into our piles of cards to find those we haven't tried yet. With clever planning, we can even set up for "Oops!" to happen when the moment strikes, as Aaron shared:

The group that I play Commander with is very competitive, and I frequently find myself outmatched by powerful and expensive cards. Since I can't really compete, I take another route: my commander is Karona, False God. My deck, entitled "New Rules," has no win condition; it's just full of cards that alter the board state in oddly specific ways (Darkest Hour, Cornered Market, Enchanted Evening, etc.).

In a five-player game, two good friends of mine were going at it: one, piloting Omnath, Locus of Mana, cast a gigantic Genesis Wave. The other, running The Mimeoplasm, responded with Draining Whelk to create a 37/37 flier. Thanks to Seedborn Muse, Omnath had mana up to fire back a Beast Within on the next turn. It was at this point that I raised my hand at the end of the table. "Response. Radiate targeting Beast Within, made uncounterable by Vexing Shusher? All permanents are now 3/3 Beast tokens." 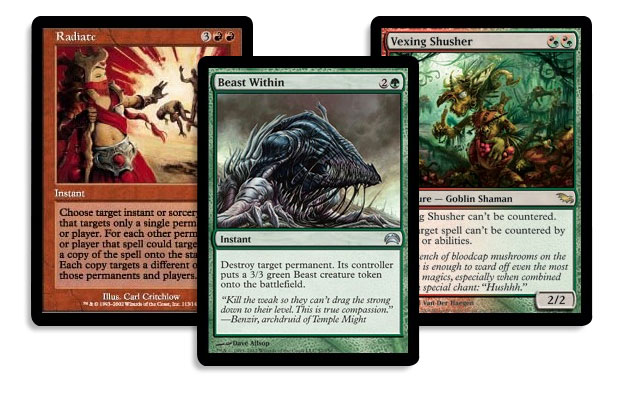 Suddenly there were no fancy artifacts or dangerous enchantments. Everyone had between twenty and thirty tokens, and that was it. The one poor sap with a Darksteel Ingot was quickly ganged up on, and after a few more turns the game was mine.

I think you sent it to just the right place, Aaron. Following chaos as a theme has its advantages, like turning everything in play into Beast tokens. Planning wacky ways to interact with other players' plans is one way to create a different experience.

Other times, it's just the sequence of cards that breaks the game in half, as Garrett explains:

The most awesome Commander story I have is the time I was playing a four-player game. It was Niv-Mizzet, the Firemind (me) vs Rith, the Awakener; Teysa, Orzhov Scion; and Maelstrom Wanderer. Maelstrom Wanderer cast a Sylvan Primordial, destroying three permanents, getting three Forests. On my next turn, I cast a kicked Rite of Replication on the Sylvan Primordial, destroying fifteen permanents. On my next turn, my Charmbreaker Devils got by my Rite. Everyone decided I had won at that point. Turns out, ten Sylvan Primordials will usually win you the game. 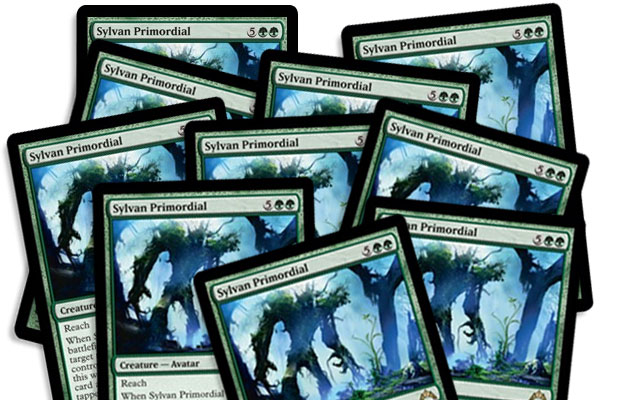 I'm not sure "usually" is a strong enough word here, Garrett. Following through a strong sequence of events can lead to some absurd moments, like what Doug sent in:

I have a Vedalken Orrery, one of the other players has Alchemist's Refuge. I have Spine of Ish Sah in play along with Phyrexia's Core to sacrifice it, but he has Tormod's Crypt in play. At his end of turn I play Gauntlet of Power, then sacrifice my Spine to force him to use his Crypt. Then the following happens.

Later I get revenge and kill him by casting Phthisis on his Ulamog, the Infinite Gyre.

That back-and-forth tango of haymakers can electrify games, but dancing at instant speed is something else entirely. The cards can be entirely different, but the intricacies of multiple effects at once isn't limited to just between two players, as Ruben can attest:

I once played a game with six people. The board was filled with creatures, and there were some interesting things.

At one point, Player A cast Chain Lightning, dealing 12 damage to everything.

I pointed out that Player D could sac the Unicorn to destroy Player C's O-Ring, giving Player B the Obliterator, which would get Chain Lightning'd, causing Player A to sacrifice all of his permanents. We laughed pretty hard at that, and then didn't do it, for the sake of continuing a fun game.

I was glad when he didn't do it, because it showed me that my friends found playing a fun game was more important than winning said game. 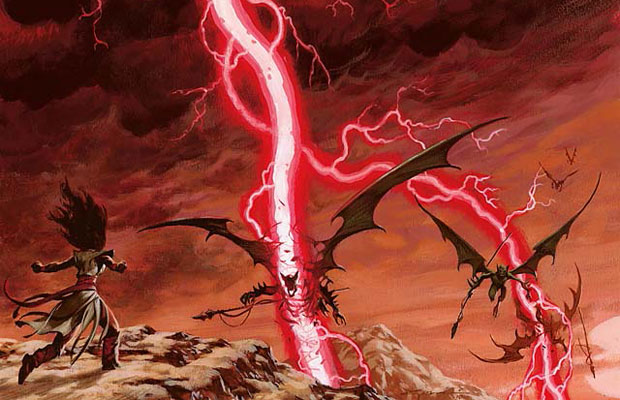 Just because you can do things doesn't mean you should. Ruben's game could have easily gone the other way and quickly shoved one player right out. Deciding to go the opposite way is what the social experience of Commander is all about. In fact, it's entirely possible to come back from the most perilous of situations if the group allows it. Tjesse explained:

This is a story of before my playgroup decided to ban infinite combos (which is way more fun without them). We were playing Commander with four of us, and I was playing Nin, the Pain Artist. My early game was very bad, and I couldn't get much on the board, which led to getting attacked a lot, since they were like "You're open, so I'll attack you."

Eventually, I even got down to 1 life, with no single creature on the board. They all kinda felt bad (nearly no one else was attacked yet), and didn't want to be "that guy" who would finish me off, so I got about ten more turns to stabilize (anyone could've finished me off). That's when I finished the game with Reiterate, Reality Spasm, making infinite mana, and then burning all of them with combat storm.

What did we learn? Never leave an opponent at 1.

While defeating opponents is inevitable in multiplayer, it's still something to consider carefully before pulling the trigger . A simple rule like "Finish what you started" can keep comebacks from happening easily, but the right balance between striking your foes down with heartlessness and refusing to lay a finishing blow is something your groups will have to work out among yourselves.

What's my favorite story? It's the two-parter of building a new Commander deck at Gen Con, then going "Oops! My whole deck's in play!" in its very first game that weekend. It wasn't expected, made everyone laugh, and wasn't meant to happen most games.

In other words, it was that perfect storm of interactions that defines what so many of us love about Commander.

Speaking of experiences, this weekend's Magic 2014 Prerelease events promise to let you experience the newest cards first. After your Sealed matches are over, those new card you have can go right into your Commander deck to create an experience all over again. It's handy to play a format that lets you use the newest cards as soon as you get them!

Next week, we'll look at the plethora of reasons we're all excited for Magic 2014 in Commander, but in the week after I'd like to take a trip back to Return to Ravnica with a rundown of decks covering the gamut of commanders from the block. What is your favorite Commander deck that uses a legendary creature from Return to Ravnica, Gatecrash, or Dragon's Maze?

There's one more important requirement: Your decklist must be formatted cleanly like so:

That's single-spaced, with the number of the card in the deck leading each line and without any subsections, header, or words that aren't card names. If you have your deck on Magic Online you can easily export it in the right formatting! (The order the cards appear isn't as important as the formatting.)

Join us next week when the newest cards become our newest fascination. See you then!