A Story of Standard

So, how did National Qualifiers play out? Here are the stats—the known stats at the time of this writing, that is—for Qualifiers in the US: 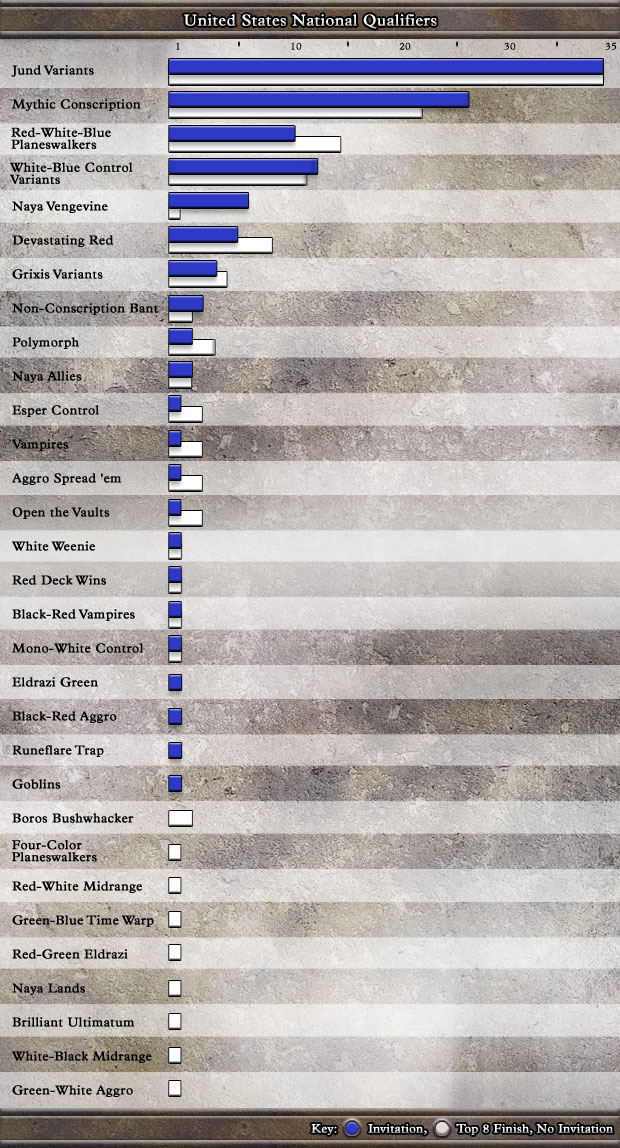 Some of what we know is surprising (but maybe shouldn't be), and other stuff is just, well, surprising!

Jund Is Still the Deck to Beat

After several weeks of touting white-blue, specifically White-Blue Tapout variants, as the new dominant player in the Standard landscape, Jund battled back and killed all kinds of butt at National Qualifiers. Leading all decks in Top 8s, and leading all decks in invitations, Jund either never relinquished the top spot, or got it back last weekend.

The cool thing about Jund, though—the cool thing about Jund finally maybe—is that it is no longer a homogenous erratic mana deck that relies on flipping a whole lot of Blightnings to win. Today's Jund—that Jund line item anyway—represents a fair number of decks with unique elements and styles of play. To wit:


This is the newest incarnation of the Jund deck. It plays more sacrifice lands to support a Plated Geopede attack starting on turn two. Between Plated Geopede and Putrid Leech, this deck has eight different offensive two drops that can batter down a Wall of Omens and take big chunks out of the opponent's life total. You might notice the return of the four-of Maelstrom Pulse. With so many planeswalkers in the format, Jund wants more ways to deal with those, too.

The other super cool, super special thing about this style of Jund deck is the sideboard. One basic Island (which can be found by several main deck lands as well as Borderland Ranger) allows the deck to sideboard in Sedraxis Specter. Remember, against most blue decks, you are going to have an Island in play anyway, thanks to the best blue card in Standard, Spreading Seas.


This is not quite the classic Jund, but also not far off. This deck, in contrast to the Geopede style, has no offensive two drop! No Putrid Leech! Unlike the deck that won the most recent Pro Tour, this deck has plenty of removal—Bituminous Blast, Lightning Bolt, Maelstrom Pulse, and Terminate—as well as a little acceleration.


Here we have a Jund deck that doesn't even play Blightning! Instead the proactive plan revolves around breaking stalemates with Eldrazi Monument. It is in a sense a more flexible, more powerful, look at Eldrazi Green ... Trevor's deck still has Master of the Wild Hunt, but its token generation is up a notch thanks to Siege-Gang Commander and Sprouting Thrinax.

While all of these decks have similar elements (even with the sacred cow Blightning being cut in one version you don't see anyone skimping on Bloodbraid Elf), they do completely different things from game to game. One tries to beat blue at its own game, one is slow, steady, and powerful, and a third wants to win with haymakers instead of a series of well-placed jabs. While they are all superficially "Jund", failing to recognize their differences not only robs you of potential wins, but the richness that the current format can breathe into even the most tired, over-maligned, archetype.

Mythic Conscription Has Taken Over the World

But Mythic Conscription has become about the second most popular / second most effective (in terms of invitations earned) deck across the country.

2 Rafiq of the Many 3 Jace, the Mind Sculptor 1 Elspeth, Knight-Errant


Timothy's list seems fairly representative of the archetype as we find it today. The big defining element of this deck is the replacement of Finest Hour (and often Rafiq of the Many) with the Sovereigns of Lost Alara and Eldrazi Conscription combination. With Sovereigns of Lost Alara in play, you can hunt up Eldrazi Conscription mid-combat in order to hammer the opponent for a large chunk of bonus damage. The Conscription version has a hefty advantage in the mirror (you can just chump block a Rafiq-enhanced threat), whereas a trampler that is ten larger than it is meant to end negotiations fairly quickly.

To the eternal ire of control decks, this style of deck has adopted quite a few planeswalkers. Three copies of Jace, the Mind Sculptor and some number of Elspeth, Knight-Errant are pretty common. Elspeth is obviously a spoiler when you are launching gigantic creatures "to the air" ... and if nothing else, controlling Jace will keep an opposing Red-White-Blue Planeswalker or White-Blue Control deck from controlling Jace; and hey! That's half the battle these days.

Vengevine Is on the Verge of Changing Everything


I don't think I could have been happier than to see one of my best friends—Brian David-Marshall—qualify for the National Championships. He did so with a 32-creature attack deck designed and promulgated by my favorite Magic columnist and deck designer, Gerry Thompson.

Gerry's Naya deck, which we have been calling Naya LikeSaber (because it was promoted on Facebook, where you "Like" things) is an offensive atomic bomb. If you need to recover Vengevine, a Bloodbraid Elf will almost always do it (only two total non-creature spells to flip). A Ranger of Eos always does. The deck still has the Knight of the Reliquary gas for Sejiri Steppe (and whatever else you might want land-wise) that has made Naya a premiere strategy for some months. 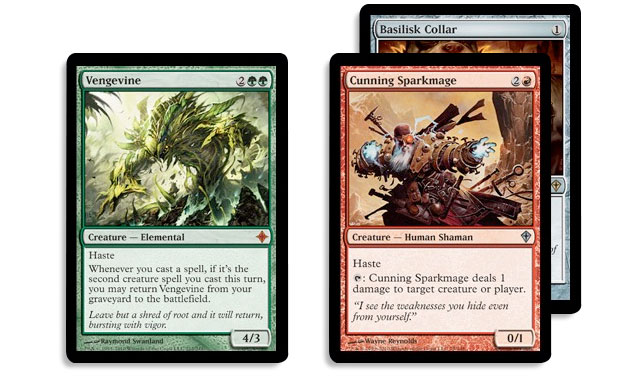 A special something featured in this list is the presence of main deck Cunning Sparkmage. The Sparkmage is hell on Malakir Bloodwitch with the main deck Basilisk Collar (which can be found by Stoneforge Mystic), but subtly, makes the Naya deck a huge favorite against Polymorph. Go ahead and try to resolve that action.

Gerry's sideboard plays much like the Sedraxis Specter approach we saw in Geopede Jund. How do you cast Vapor Snare in Naya? Well, you have an Island, several search mechanisms, and Noble Hierarch ... but the answer might as well be Spreading Seas. Vapor Snare not only comes online thanks to Spreading Seas, but you can spend the next several turns "cleaning off" your lands by bouncing them; such a cool addition to the deck by such a good designer.


The combination is to float mana when you play Devastating Summons, and then to use a floating 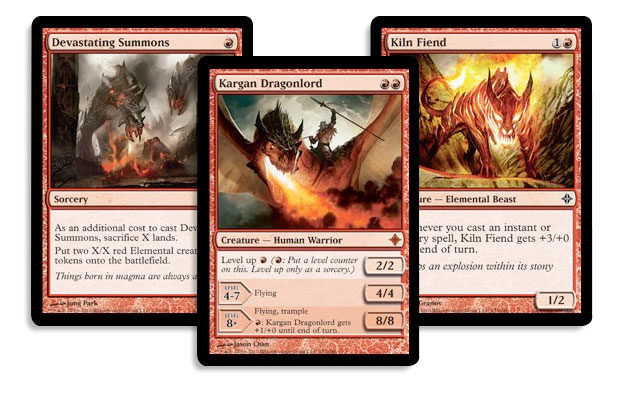 Different decks use Kargan Dragonlord or Kiln Fiend, but tend to be more creature-heavy than the red decks we have become used to the last few months—more solid summons, few to no Hell's Thunders, and so forth.

For all its hype, Red-White-Blue Planeswalkers seemed to under-perform

This is particularly surprising because the whole point of Red-White-Blue Planeswalkers was to supplant White-Blue Control!

I am going to break from the form of the rest of the article to call out Ryuichi Arita's deck from Kanto.


The thing that I really like about this build is the re-integration of Knight of the White Orchidalongside Wall of Omens. A few weeks ago New York Pro Tour Qualifier winner Phil Napoli talked about going back to Knight of the White Orchid ... this deck did, and didn't even cut the Wall! What you see in Arita's deck is probably a fairly common—albeit not universal—number of counterspells. That is, none main deck.

This Metagame Can Be Put Over Your Knee

4 Quest for the Goblin Lord

I didn't expect to see Goblins. Did you? Kyle's deck can begin with Quest of the Goblin Lord ... and it's just brutal. The attacks are relentless, the creatures ever-increasing in size and tenacity.

4 Font of Mythos 4 Howling Mine

4 Howling Mine 4 Into the Roil 4 Twincast 4 Swerve


Unlike Polymorph, that Emrakul, the Aeons Torn's primary job is to prevent deck exhaustion. How about the other 59 cards?

Cards like Runeflare Trap help this deck to be much more mana efficient at, you know, killing the opponent. With Howling Mine and Font of Mythos in play, the opponent will be drawing three almost every turn; might as well do something that ruins that net-decker's day.

You know what's crazy? We barely scratched the surface in this one. There are dozens of new and different and viable decks here. Just as there are different looks at Jund, there are different looks at Grixis. Some decks play no creatures at all, where some hold creatures to be a core to winning. Some pick up Gatekeeper of Malakir with Jace, the Mind Sculptor, others lace up the two-for-one with Staggershock. Me? I was lucky this weekend. This is what I did:


This deck, by the way, is the best against Red-White-Blue Planeswalkers, White-Blue Control, and those kinds of decks. Red Deck Wins and Vengevine? Different story altogether.

The next chapter in this story of Standard begins this weekend, at Grand Prix–Washington DC. Check back to the tournament center to see how other players processed the metagame information to do even more new things.