Star Date—and I mean Star date—1977: Basically the greatest movie ever. Farm boy. Princess. Smuggler. Old man with a plasma sword. Exploding planet. Old guy in the plastic mask breathing all hot and heavy. Ancient religion. Did I mention the princess? Plasma swords? Gigantic ape-thingy that no one can understand. Valiant wheeled robot ... that (also) no one can understand. Smuggler face turn! Exploding moon-sized space station! Gold medals (i.e. blue envelopes) all around!

Basically the greatest movie ever.

Until three years had gone by. 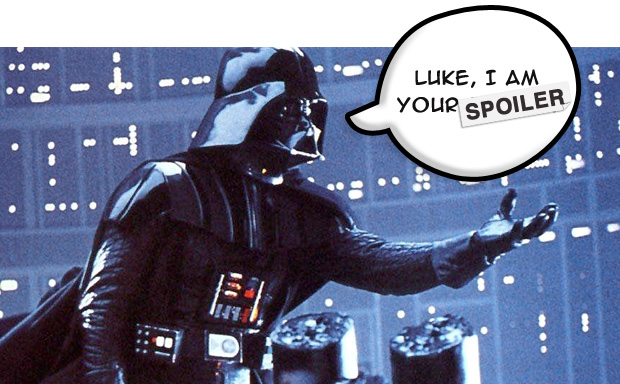 More farm boy; snow-covered farm boy. More princess! More smuggler (does he ever actually smuggle anything? Who is he, Bilbo Baggins?); snow- covered smuggler. More plasma swords. Plasma swords crashing into each other. More space ships. More robots. More old guy in a plastic mask breathing all hot and heavy. More of everything that doesn't suck, in fact. Heroes of dubious parentage. And not to give away any, you know, thirty-year-old spoilers or anything, but ...

Thirty years later: Still pretty much the greatest movie ever, by the way.

What the heck am I talking about?

Sometimes we have a great card. I mean a really great card. The kind of card that is so good it is Staple from every format from Block to Extended. The kind of card that five-color Zoo decks will build their mana bases around ("Overgrown Tomb is the worst card in the deck ... but you kind of have to have one"), and is the beatdown for an otherwise mono-board-control brew, and is a one-drop ... and an Akroma (!) ... and a Baloth-of-sorts, in-between.

What kind of card is this?

I write of course about the mighty Figure of Destiny. 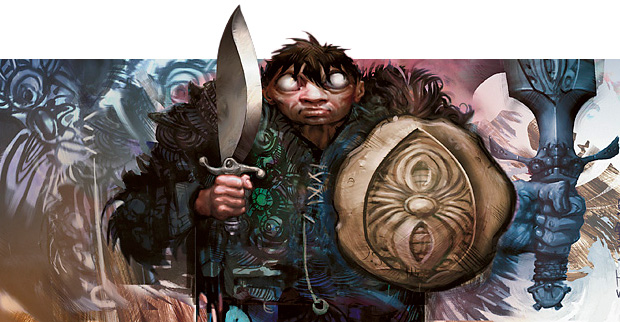 Figure of Destiny wasn't quite Tarmogoyf, but it was (and in some formats, remains) one of the hardest working one-drops in the history of competitive Magic: The Gathering. Figure of Destiny slid under counterspell walls and demanded creature removal. In the universe before Path to Exile, Figure of Destiny would sometimes demand a Wrath of God (or equivalent) all by itself. It was good. Like the best of team players, it made everyone around it a little bit better. It un-mana flooded you; it made blocking difficult for the bad guys. It made bad hands better and ragged mana curves smooth as a new pack of sleeves.

And when there is a new card so obviously inspired by a Figure of Destiny ... comparisons to the "sequel" become unavoidable. 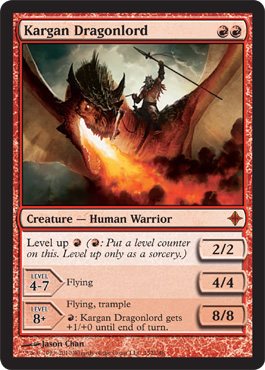 Given the pedigree of the original proto-leveler Figure of Destiny, I probably won't have to sell you on the inevitable staple-ness of the Rise of the Eldrazi level up version. This card is going to be good enough. More than good enough. There are some shortcomings relative to the storied original, but some very worthwhile bonuses as well.

If we begin with a superficial comparison, we can begin with the mana.

Let's Play: What Do You Get?

Figure of Destiny goes to 4/4 with the expenditure of a total of five mana. This was always very attractive due to the obvious curve potential. You could cast a first-turn Figure of Destiny, then on the second turn you could use one mana to go 2/2 and then hold a mana in reserve for a Tarfire (or the equivalent), or play a land on the second turn that hit the battlefield tapped, viz. Ghitu Encampment. Then on the next turn you could pay all your mana to go 4/4.

In the short term, Kargan Dragonlord is somewhat less efficient: Assuming you have three mana on the third turn, you can't typically go all 4/4 on the opponent's face. You need four level up counters, and you won't usually have four mana to have produced those by the third turn, barring a Simian Spirit Guide, Rite of Flame, or some such.

While you lose a mana's worth of efficiency, you do gain a measure of versatility. Say your third land enters the battlefield tapped (or, Baneslayer forbid, you miss your third land drop) ... You would not be able to go 4/4 with Figure of Destinyanyway. You would however be able to put the first two mana of your 4/4 down payment into Kargan Dragonlord.

This is a subtle advantage that levelers have over the wonderful card that inspired them: a challenge to Figure of Destiny—especially when it went "ultimate"—was the availability of all that mana on the same turn. With levelers, you can progressively put a little bit of mana into them at a time, whenever you have some spare, and grow them over the course of multiple turns. I'd wager this has more edge in Limited, where your plays are typically less predictable, scripted, and perfectly curved out than in Constructed ... but the ability to level up with a spare mana or three over several turns certainly seems welcome in this case.

Anyway, that extra mana buys you flying in the case of Kargan Dragonlord.

For one thing, you only need ten mana to get a Kargan Dragonlord fully leveled up, whereas Figure of Destiny would cost you eleven. More importantly, six of those mana would all have to be spent on the same turn in the case of the Kithkin ... which can feel like ten mana when you are scrambling for lands under pressure.

And what about the final forms?

Kargan Dragonlord has trample over Figure of Destiny's first strike. I would argue that a difficult-to-block infinite/infinite (turn those eights on their sides, why don't you?) needs first strike like Nemo the clown fish needs a Harley Davidson. Trample, on the other hand, lets Kargan Dragonlord power over, say, a solo Thopter Foundry token (or insert whatever 1/1 flying chump blocker produced by, say, Emeria Angel that you wish). Rawr.

Even after a full leveling, Kargan Dragonlord continues to give you a dump for your excess aggression. The traditional Shivan Dragon ability, Firebreathing a la Alpha, is there to make flying and trample that much more dangerous ... and this time, you get the ability at instant (rather than sorcery) speed.

So what about the time restriction on when you can play a level up counter?

My snap judgment is that there is a reason for so stark a templating decision. The best of the levelers (and I would guess that Kargan Dragonlord would fit into that division) were just too good with instant speed level up capabilities, essentially making every deck a curve-perfect Sligh strategy.

By forcing players to level up only on their own turns, we demand greater skill from all involved.

The level up player has to do math ahead of time. Add one more counter, or leave mana open for removal or permission (or just plain bluffing)?

How about from the other side of the table? What can the opponent infer from the amount of mana that the level up player is willing to invest each turn? What kind of clock can he or she expect to be on over the next couple of turns?

I would guess that "slow" leveling is a good design / development decision, and that, like threshold or morph in faraway days, the best players (or at least the players who invest the most time and effort into the format) will be able to use mathematics and information to make better decisions past the basic economics of card advantage.

Kargan Dragonlord is probably not the first leveler you have seen at this point. In fact, you can check the full Rise of the Eldrazi Visual Spoiler in the Product Section to see cards like Lighthouse Chronologist, Knight of Cliffhaven, and Guul Draz Assassin. It is probably worth walking through some of the things that set levelers apart visually (as well as in terms of mechanics), as they are going to be a new, different, and much-played part of the Magic landscape in the coming months and years.

Levelers, unlike most creatures, have three power/toughness boxes, delimited by three level-based striations. This might not be obvious, but the abilities described by the third striation will wholly supplant any abilities granted by the second striation (though the level up ability itself is level-independent).

So in the case of Kargan Dragonlord, the ability "flying" is printed twice. 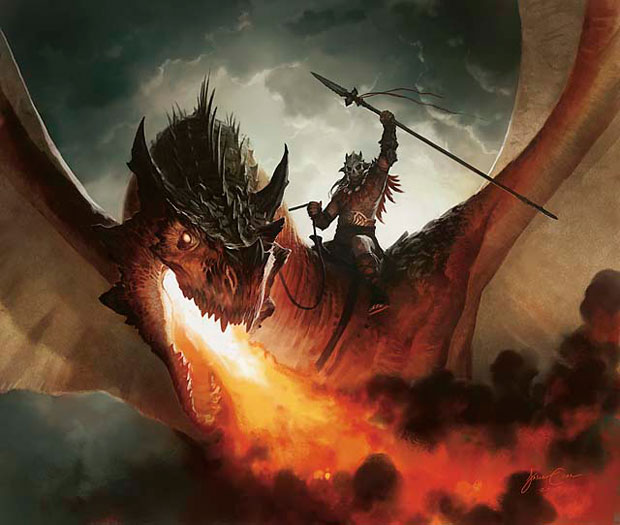 Desktop and iPhone wallpapers available on the Puzzles page in the Rise of the Eldrazi product section!

At this point I don't know if Figure of Destiny will spawn a trilogy, or will inspire a sequence of prequels, but as far as straight encores go, Kargan Dragonlord (and its leveler brethren) might just play The Empire Strikes Back to Eventide's Episode IV. The only thing I am wary about at this point is the non-synergy with that choice of champions Ranger of Eos ... but hey, with a card this good, how else are we going to give the bad guys their open to win?