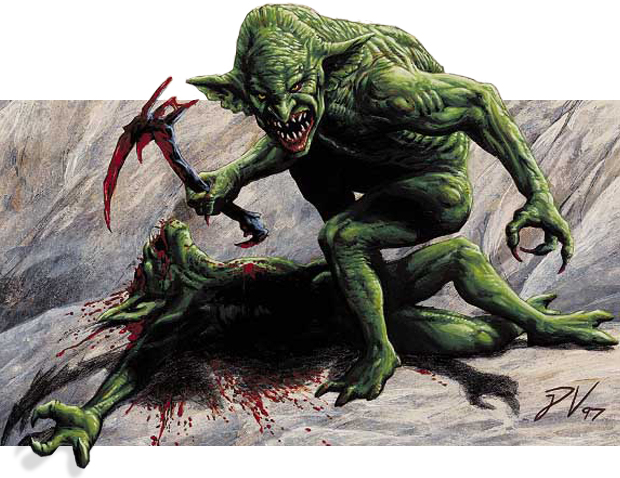 Coverage reporters used to fight over who would not have to record the Survival decks at Pro Tours, Grand Prix, and other large events; a Red Deck, sure ... you might have nine lines, all four-ofs: Cursed Scroll, Mogg Fanatic, what have you. But the Survival decks were often long stacks of one-ofs: one Spike Weaver, one Radiant's Dragoons, one Spirit of the Night. 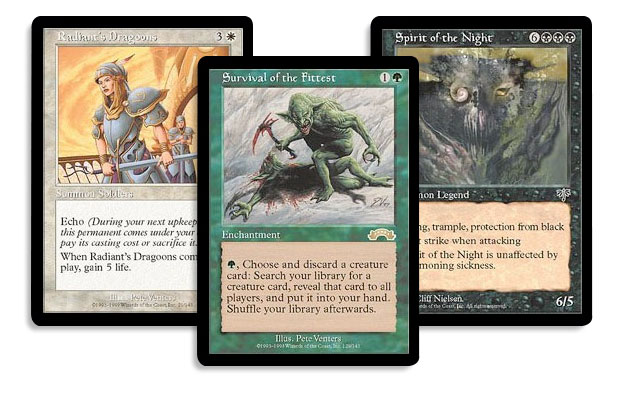 There were five-color Survival of the Fittest decks, and two-color Survival of the Fittest decks (black-green with Recurring Nightmare ... predecessors to The Rock), and other, less common, two color combinations: blue for Force of Will, Tradewind Rider, and even Ophidian; or red for Squee, Goblin Nabob and Firestorm. There were even straight green—so-called "Stupid" green—decks that showed when you could pick what you wanted each and every turn (often multiple times per turn), you could have more than enough excitement just from Wall of Blossoms, Spike Feeder, and Stampeding Wildebeests. 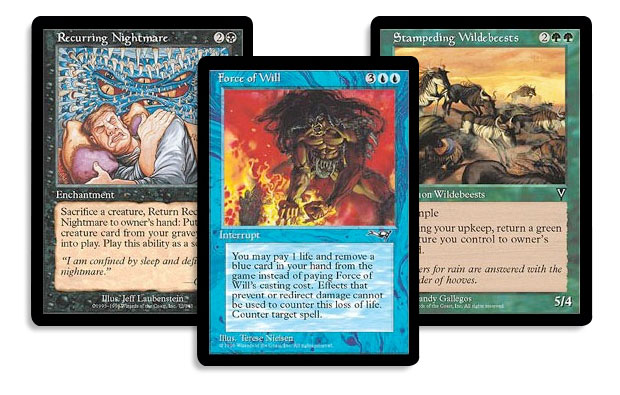 These decks thrived thanks to three major principles:

1. Because Survival decks could go and get whatever they wanted whenever they wanted, they could play with nearly infinite versatility; most decks that want to reliably draw a particular card or kind of card have to devote a certain amount of space to do that; for a Survival of the Fittest deck, that amount of space is one card; provided you have Survival, a creature to pitch, and

, you have what you need. Subtly, if you draw something inefficient in a particular match-up, you can throw it away and find something that you like better.

3. Survival decks could be engineered with an eye towards any individual player's preferences and comfort levels. For example, a straight green deck might be able to afford Gaea's Cradle whereas a black variant might supplement its recursion with Volrath's Stronghold. The Rock designer Sol Malka played four copies of River Boa in his deck ... just because he likes regenerating creatures! They were great against Mono-Blue, of course.

Wouldn't it be great if we could play like this again?

You aren't going to have to wait very long: 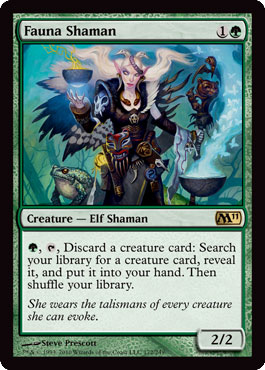 1. You can't use Fauna Shaman the turn it comes out. You've got to wait a minute, here.

2. You can only use Fauna Shaman once per turn. Survival of the Fittest could rapid fire out many uses.

3. Instead of being a do-nothing enchantment, Fauna Shaman has got legs! In fact, it is that quintessential kind of great Magic card, a 2/2 creature at the two.

The first two limitations (relative to Survival of the Fittest) seem like necessary shackles to me. I mean the last thing we want is for you to immediately dump a pair of Vengevines into the graveyard and then just go off with Fauna Shaman. I mean killing a Fauna Shaman is going to be pretty important, because you are going to be going off with it + Vengevine as it is ... maybe not immediately, but you will.

Here are some ideas:

1) Set up your graveyard with at least one Vengevine,
2) Play some creatures (maybe even another Fauna Shaman) to get your Vengevine going.
3) Rock and roll!

What is the scariest beater you can reliably get in Standard, and in a hurry? That's right, Bloodbraid Elf! 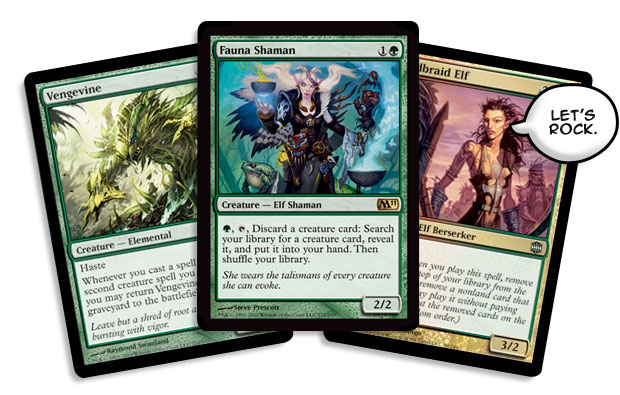 How about you just play Bloodbraid Elf every turn, for the next four turns? Normally flipping up your two drop is a little disappointing with a random Bloodbraid Elf cascade, but what about when you are flipping up another Fauna Shaman?

I have visions of one Fauna Shaman throwing Vengevines into the graveyard while its buddy Fauna Shaman #2 is calling up Bloodbraid Elf on the phone and recruiting it for the new squad. Bloodbraid Elf is calling up whomever. Somebody, it doesn't matter, all the same; all bringing up Vengevines. What about Hell's Thunder? That guy (and by "guy" I mean "Elemental") is basically, you know, hell on the opponent when accompanied by Bloodbraid Elf and Vengevine, all three (or more) of them rumbling into the red zone all at once.

Did I just say "Hell's Thunder"? I mean you can dump that cat (and by "cat" I mean "Elemental") into the graveyard as Fauna Shaman's first move. Then, when you have a spare mana (if you have a spare mana) or five, you can actually gain value from your initial toss. It's almost like you were playing with Squee, Goblin Nabob again! This might be a great "recovery turn" play if your opponent wipes your initial attacking run with a Day of Judgment, All is Dust, or other sweeper.

As I said before, back in the day, you could build all different kinds of Survival of the Fittest decks ... so there is no reason moving to Fauna Shaman we have to play just a Vengevine aggro deck. What if we want to play a mid-range tool box? Fauna Shaman will be good at that, too! 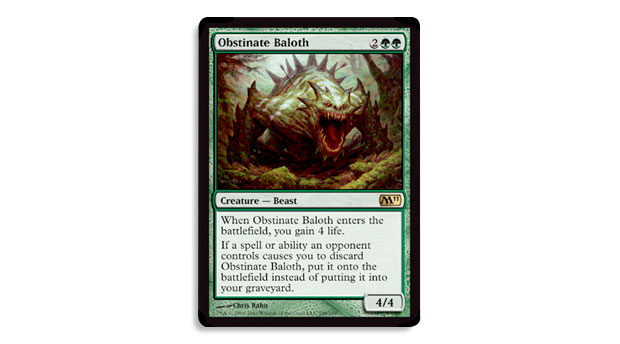 You can literally play one copy of each of your answers and still look like the luckiest lucksack in the room. So, one Obstinate Baloth for burn decks (and no, it doesn't work that way if you discard it to Fauna Shaman, or we'd probably have more than one), one War Priest of Thune for the occasional Oblivion Ring, a Gaea's Revenge in the "Spirit of the Night" slot ... plus twenty or so other specific answers to specific questions; it will almost be like you are on the Global Frequency. 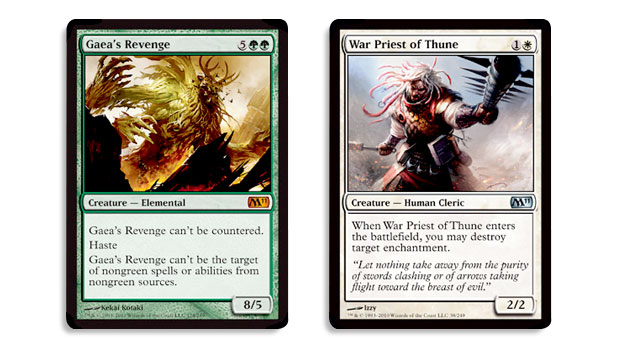 Now there is no reason you have to play only one copy of an answer card. For example, it might be fun to go and get Obstinate Baloth, and another Obstinate Baloth, and another when the opponent is aggressive. You know, make your opponent really wish he or she had a piece of point removal for your Fauna Shaman, then once you are up 12 life with 12 power in play, you put create a situation where it's no longer reasonable to use it on the little Fauna Shaman.

You can play Fauna Shaman as a combo deck enabler. I mean what do you call it when you go and get Ranger of Eos, that goes and gets a Goblin Bushwhacker? Or you can play a "slow" grind, with the Ranger setting up Dragonmaster Outcast, itself a "more and more threats" engine. If you have to, you can use Fauna Shaman to set up Sylvan Ranger and Borderland Ranger to ensure sufficient lands in play for your Ranger-spawn. 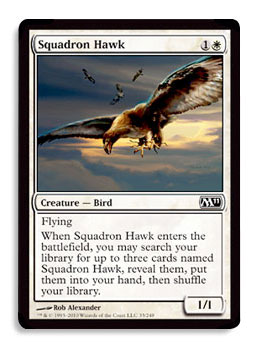 Now Ranger of Eos is obviously three creatures, but what about four? Squadron Hawk is not only four creatures for the price of one, but given the quality of those creatures (at least relative to what you can be dropping) ... will probably end up fueling your next several rounds of Fauna Shaman threat acquisition (who wants to play an offensive 1/1 for two in a deck like this?).

Why limit yourself to reasonable things? The world, after all, is ruled by unreasonable people! Start on an Oracle of Mul Daya and see where that takes you! Before you know it, your Fauna Shaman just might be scouring the world (that is, your deck) for Avenger of Zendikar! Or not! There is no reason—when you have access to anything (or at least any creature) you could ever want, on a single mana—that you have to conform to previous molds and models. The whole point of this kind of customization is that you don't have to.

Honestly, the conversation is yours.

Sure, there will be limitations, basic limitations. This is a 2/2 creature. It certainly bites it to Lightning Bolt, Doom Blade, and other popular point removal spells. But as we've said a thousand times in this column, Magic is a game of awesome two drops, and this is the latest in a long line of them. If the opponent doesn't have a point removal spell, or he or she underestimates you, he or she will likely be in for a world of hasty hurt. If your opponent does have it ... 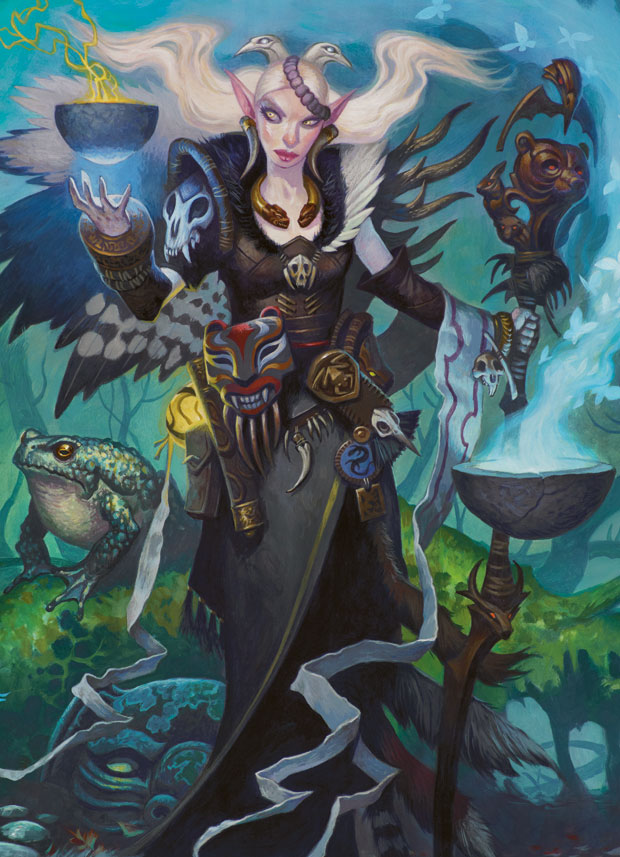 After all, Rampant Growth has been a tournament playable two-mana staple for years. When your opponent realizes all of the nasty things your Fauna Shaman is about to do to him or her then throws a Path to Exile at the little two drop—Fauna Shaman is like a Rampant Growth, too.