few months ago I got to preview a little two-drop by the name of Fauna Shaman, a bang-up creature quite reminiscent of a little two-mana enchantment by the name of Survival of the Fittest; I called the preview article "Survival" for obvious reasons. Well this article is four times that article's, you know ... title. 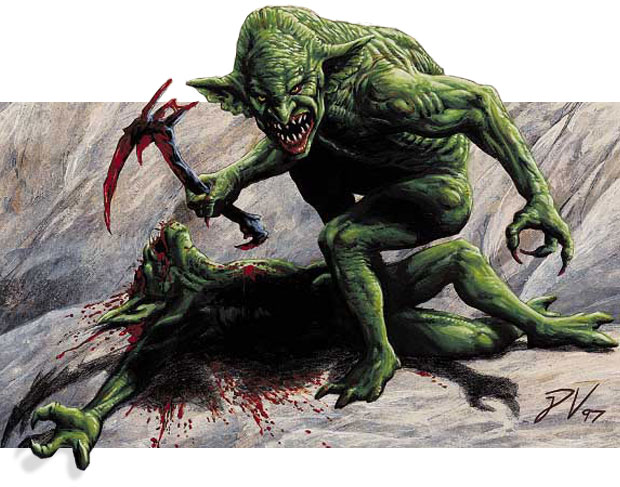 So what inspired this unusual naming?

It was the results of the Star City Games Legacy Open in Nashville, TN a couple of weeks back; I was actually really enamored of the Legacy results this time and wanted to write about the decks last week ... But "How to Think About Magic" happened instead.

I rarely pay close attention to the Star City Legacy results because Legacy only has Grand Prix or other Premier Event support a couple of times per year, but this time I just couldn't help myself. In this Top 8 there were four Survival of the Fittest decks. All different ... and some of them colossally cool!

Let's see what evolution is bringing us:

Jessie Butler's tournament winner is probably the most straightforward of the four. We have certainly seen straightforward Survival of the Fittest aggro decks in Legacy in the past, but Jessie's is even more simple and easy to follow! This is literally a stack of good green and white creatures, a little removal, and three pieces of Equipment—all laced together with Survival of the Fittest.

2 Basking Rootwalla, 4 Vengevine: One of the baseline strategies for this deck is to dump a ton of Vengevines into the graveyard, then use the Basking Rootwallas to get them back for free. A handful of green mana will transform an otherwise empty battlefield into a slaughterhouse between Survival of the Fittest and these six creatures; no, you don't have to go all-out if you don't want to.

1 Wonder: Because that Tropical Island is really going to ruin somebody's day.

1 Aven Mindcensor: Because this particular singleton, in a deck based around searching through and shuffling your library, is comical. And might just prove effective against decks that need to search through and shuffle their libraries for basic operation.

3 Faerie Macabre: This is a pretty cool sideboard card in a Survival of the Fittest deck. For essentially

you can exile up to two cards from the opponent's graveyard. It costs you

to search your library for the Faerie Macabre (ideally pitching a Vengevine), but at that point, you can discard at will (no incremental mana cost).

What did Butler beat in the finals? Another Survival deck!

When was the last time you saw that?

Four Wild Mongrel is the default before we, at least historically, have seen respect for Aquamoeba or other madness outlet creatures.

So what gives? Why promote Aquamoeba to three copies when Wild Mongrel is only at three copies?

The simple answer? Aquamoeba is blue. You need blue cards to be able to discard Force of Will in the first couple of turns. Force of Will, and to a lesser extend the other countermagic in this deck, allow for meaningful interaction with combo decks.

4 Noble Hierarch, 3 Trygon Predator: Noble Hierarch is just the best mana acceleration creature in this kind of a deck. It's a one-drop that produces both of the colors that the deck needs. But unlike Birds of Paradise, Noble Hierarch can actually contribute some damage (and in multiples lots of damage), but the flying is less relevant because we have Wonder.

First turn Noble Hierarch is of course the first step to second turn Trygon Predator. Trygon Predator is an awesome card in a format where Counterbalance and Sensei's Divining Top are some of the key cards, along with Æther Vial, countless affinity artifacts (allegedly) ... and of course, the topic of today's article, enchantment Survival of the Fittest. Trygon Predator is kind of like the angry, raging warmonger version of Ophidian.

One thing you probably noticed moving from the Green-White to the Green-Blue Survival of the Fittest decks is the lack of a lot of staple-type stuff. For example, the green-white version played Swords to Plowshares whereas Strait's green-blue deck has precious little on-battlefield creature control.

At an even more basic level, Butler played Tarmogoyf—basically the Cadillac of offensive two-drops; the green-blue deck? Not so much.

How about this one: The Green-Blue Survival of the Fittest deck doesn't play Brainstorm. If it were up to me I would try to find a spot to play Brainstorm, because not only does it improve your opening hands (greater chance of drawing Survival of the Fiittest, plus the ability to hide and shuffle away excess copies), but it serves every much as the go-to for Force of Will companion in an otherwise blue-thin deck as Aquamoeba.

Cai's deck has a little something extra.

While it is fundamentally quite similar to champion Jessie Butler's deck, Adam Cai (along with a number of other small changes) plays two cards that really set his build of Survival off:

Loyal Retainers does his thing (dying) and you get a relatively inexpensive 7/7 mythic rare Angel that can lock down entire decks just by being. I guess that's why she costs nine!

Now on the subject of gigantic Legendary creatures, Cai can also sub in Emrakul, the Aeons Torn. Just another (again, in this deck) three to four mana super threat that is next to impossible to target and kill, and represents a gigantic victory in the face of R&D's trying to correctly cost cards.

4 Brainstorm 2 Daze 4 Force of Will 3 Intuition

Now most of what we have seen so far would have been possible without Scars of Mirrodin. But that's not necessarily surprising—Legacy presents an opportunity to sleeve up the old cards, for Green-Blue Madness fans to hook up with Survival of the Fittest. For players to remind themselves just how much they liked cards like Wild Mongrel or Umezawa's Jitte.

But the cool thing about Marmulstein's deck is that it would be, at least in part, impossible without a new card from Scars of Mirrodin.

Necrotic Ooze has the superpower to copy the abilities of any kind of creature that is in your graveyard. What kinds of creatures of ill repute hang out in graveyards, anyway? 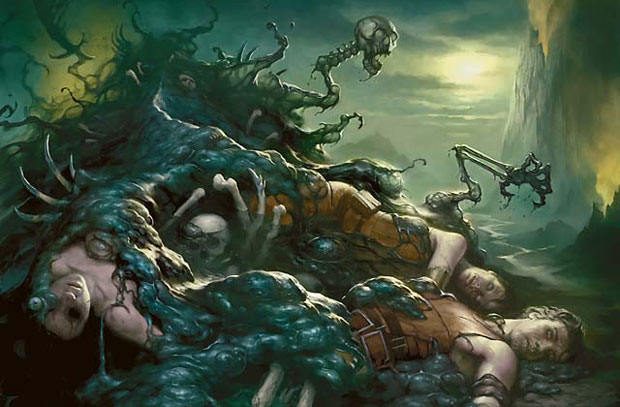 Well of course there is Wonder, the card that makes it impossible for the opponent to block. And there is Vengevine, waiting to be broken by Basking Rootwalla. That is a card that really gets along well with the graveyard. Cabal Therapy sends creatures to the graveyard as this deck's disruptive element, and the presence of Necrotic Ooze makes black mana a must; so it isn't surprising that Noble Hierarch (as we may have seen in the green-blue version) is replaced here by Birds of Paradise.

But let's look specifically at the artifact creatures:

Phyrexian Devourer ... Now there is a card that you probably had to look up (I did).

Why does this matter?

There is the matter of that other artifact creature, of course!

Triskelion allows you to remove a +1/+1 counter to shoot target creature or player for one point of damage. That makes this a full-on combo deck! If you get Necrotic Ooze in play, you can set up the combination of both Phyrexian Devourer and Triskelion in the graveyard to accumulate +1/+1 counters (over the course of a few uses, twenty, for no mana) ... and then do with those what you will—using Triskelion's ability to convert +1/+1 counters into damage.

The presence of this combination makes Rion Marmulstein's version of Survival the most interesting of the four, to my mind at least. But the coolness doesn't stop in the main deck!

When you really, really have to race; race so fast that a Necrotic Ooze auto-win is too slow for you, you can try Natural Order for Progenitus.

With Natural Order, this deck has basically the same incentive as the top end of resolved Hypergenesis in last year's Extended Pro Tour Qualifiers.

There you have it: From the most recent Star City Games Legacy Open tournament, a variety of very different decks, all in the Top 8, all based around one classic enchantment.

This weekend (10/30) is Game Day. And with this, we move from the mostly old to the shiny (and particularly shiny!) and new of Scars of Mirrodin Standard.

All Game Day participants will topdeck a full art Memnite, like so: 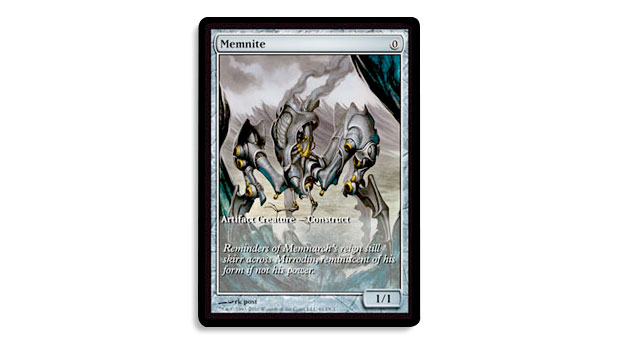 And the Top 8 players will receive a full art Tempered Steel: 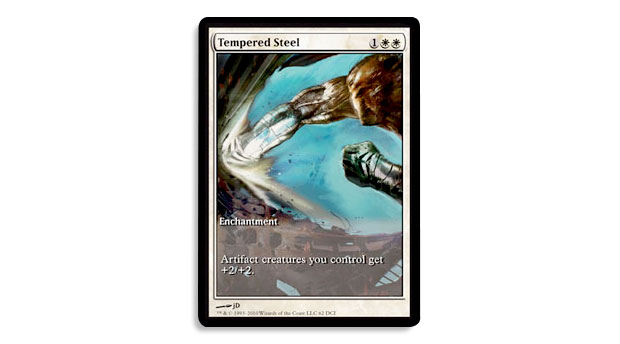 That's cool. But what about those new Mirrodin Besieged cards?

The Mirrodin Besieged prizes will go to players who have factionalized their decks. The Top 2 players with Mirran-affiliated decks will receive a Peace Strider, and the Top 2 Phyrexian-affiliated players a Pierce Strider. 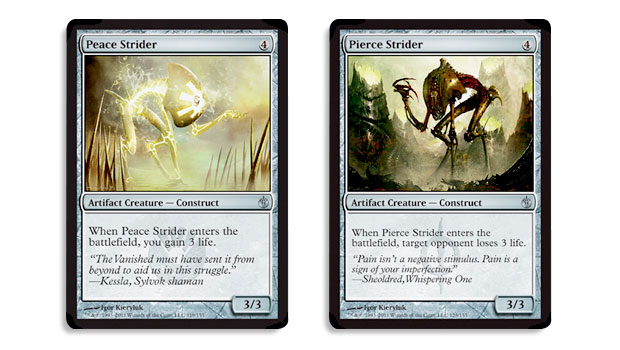 A deck is considered factionalized if it has at least TEN cards with one watermark (Mirran or Phyrexian) and ZERO cards with the opposing watermark. Factionalizing is actually pretty easy, so it might take only minor tweaking to properly affiliate the deck you want to play with. You can search watermarks here.

Just off the top of my head, if you want to play an infect deck, getting ten Phyrexian-affiliated cards into your deck is going to be almost automatic. You just want to make sure you don't accidentally add one of those pesky Mirran watermarks. Note that cards that were printed previously and have now been reprinted bearing watermarks count toward your total of that watermark even if the actual card you're using doesn't physically have one. So Trinket Mage will help you get to your total number of Mirran watermarks, but no putting Mindslaver in your Phyrexian deck.

Going the other way isn't hard either. Heck, a White-Blue deck with four Seachrome Coast and four Ratchet Bomb is a measly two cards off of a Mirran affiliation from the get-go!

You can be one of the first players in your area to topdeck a Mirrodin Besieged card by searching here for the Game Day event nearest you!