elcome to the latest edition of Perilous Research. Last week, an examination of Standard illustrated the dominance of Delver decks. However, the new Zombie-based Birthing Pod decks did a lot of damage and Delver was pushed out of the spotlight for a few days. The Delver decks were forced to adapt their lists into something that had a chance against the newest deck on the block.

By last Saturday, Delver had once again found itself on top of the metagame. New decks, like Infect, emerged and punished non-Delver archetypes. Here's the breakdown of the 4–0 decks from last Saturday's Daily events: 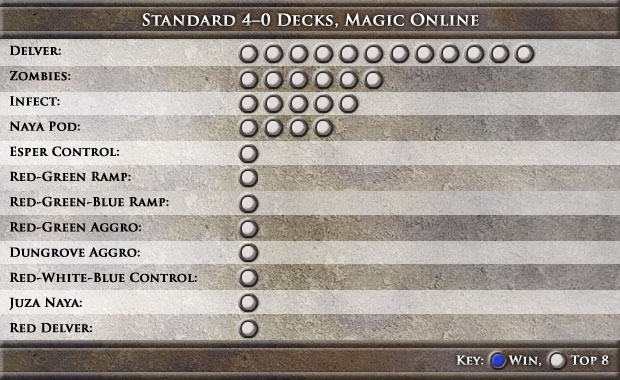 Delver is by far the most played deck in Magic Online Standard events, so the number of undefeated decks will be inflated just from the sheer abundance of Delver players. Delver decks have universally adopted Runechanter's Pike as their Equipment of choice this week. Some players have begun including Augur of Bolas because of its strength against various Gravecrawler decks, but most versions are sticking with a traditional creature base. Restoration Angel is becoming less popular now that people are experimenting with Hero of Bladehold. Many Delver players have decided to include a few Invisible Stalkers because of the strength of Stalker+Pike in Delver mirror matches. Shtaket's 4–0 Delver list from last Saturday should give you an accurate picture of what Delver decks are going to look like in the coming week:

At least one Delver player decided to blaze a new path this week. HeyPharaoh recognized the strength of Bonfire of the Damned in the current format and decided to splash the game-ending sorcery in this latest version of Delver. HeyPharaoh played Blade Splicer and Restoration Angel because they work very well with Bonfire of the Damned. Ponder lets this deck set up its Bonfires, a powerful interaction that's usually only available to control decks. HeyPharaoh's version of Delver matches up well against the newer Zombie archetypes, but is less powerful against Ramp opponents. Blade Splicer is much worse in the Delver match than Geist of Saint Traft, but Bonfire of the Damned is huge against Delver, so the deck is at least even money against other versions of Delver. I strongly recommend giving this deck a try if you've been tapping Seachrome Coasts for a while and you're looking to spice it up.

One of the biggest surprises this week is the incredible performance of Infect strategies. Cathedral of War is incredibly important for this archetype, forcing opponents to use their Gut Shots before an attack, greatly decreasing the Infect player's chances of being two-for-oned. The Infect deck performs exceptionally well against all the non-Delver decks. Many of the decks in the current Standard format are trying to ignore their opponents. When this becomes the case it's usually best to play the deck that can kill opponents in the smallest window of time. Infect usually isn't happy to find itself playing against Delver, but the deck's sheer power level can often steal a match. This is, without any doubt, the best deck if you're playing in a Standard tournament where you don't expect much Delver in the field. Here's a look at bolov0's Infect list; main deck Spellskites and Mental Missteps help even the odds when battling Delver and Blight Mamba lets you race in the air with your Inkmoth Nexus.

Green-Blue-Black Pod broke onto the scene last weekend and started to make a lot of waves. The latest version of Zombies is an impressive aggro deck that scales very well into the mid and late game. The deck gained a lot of steam over the last week thanks to a lot of professionals' advocacy. Hartmann's version of the deck has a lot of interesting bullets we haven't seen much of. Massacre Wurm is an insane top end that functions similarly to Elesh Norn, Grand Cenobite, but Massacre Wurm often ends the game the moment it hits the battlefield. Skaab Ruinator is very good against the green decks that have, once again, become a staple in the metagame. Phyrexian Obliterator punishes Ramp and other aggressive decks. Many of the lists from this week are including Trinket Mage alongside Nihil Spellbomb and Sylvok Lifestaff in the sideboard. Nihil Spellbomb's applications are obvious, but the Sylvok Lifestaff is a game-breaking twist in the mirror or against any other Zombie archetypes. I recommend this deck if you expect to play in a tournament without any Infect. Here's a look at Hartmann's Green-Blue-Black Pod list. (Remember to play around Disciple of Bolas; Hartmann cut it, but most players still have access to the powerful effect.)

Not all Zombie variants are taking advantage of Birthing Pod. The black-red aggressive decks that performed well before the addition of Magic 2013 are starting to make a comeback. This deck performs incredibly well against Delver variants and is also well-positioned against Infect. The deck struggles against the green decks in the format like Ramp and Naya variants. After sideboarding, Black-Red Aggro gains access to Manabarbs, a card that can end the Ramp matchup all by itself. This deck's success is largely dependent on the popularity of Thragtusk—the more Thragtusk we see, the less powerful this deck will be in the coming week. However, if the format moves away from Thragtusk, then this could become one of the decks to beat. Kubosek went undefeated in one of last Saturday's Daily Events piloting a very tight list. Falkenrath Aristocrat drastically improves the numbers against Naya variants and Skirsdag High Priest helps destroy other Gravecrawler decks.

Dungrove Elder seemed to have been forgotten, but the namesake deck was resurrected in one of last Saturday's Dailies. Yorick recognized the format's softness to an aggressive deck with lots of board presence. This deck seems very well positioned right now, but I worry that it suffers from consistency issues that most of the powerful decks in Standard do not. Yorick is back with another 4–0 finish, so let's take a look at the list:

Standard is becoming more diverse, but the formats age has a lot of people playing Delver even when it has bad matchups against a lot of the other decks. I would suggest playing one of the Zombie Pod variants in the coming week. The deck is extraordinarily great against most of the non-infect decks. If Delver isn't popular in your local area then I recommend putting the Infect deck together for this weekend's events; the deck's sheer power level far surpasses anything else available in Standard. (Except maybe Delver)

Pauper has been gaining a lot of popularity in the last few weeks. The format is more diverse than any point I can remember and the tournaments offer the same prizes, but the decks are significantly less expensive than those of other formats. Bushwhacker Storm, the most degenerate deck in the current format, continues to perform well, but this week we see that Infect and Eight Post are starting to make some waves. Here's a breakdown of the decks that went 4–0 in last Saturday's Pauper Dailies.

Eight Post has been around since Glimmerpost got printed, but the deck seemed to be on hiatus from Pauper tournaments until this last week. The Eight Post control deck can dominate a late game like no other. Capsize eventually begins bouncing every permanent on the opposing side of the table. I played a few matches with this list and I was very happy with how it performed. If you enjoy true control decks then I strongly urge you to take Wisnia's Eight Post deck for a test drive.

Infect isn't just finding its way into Standard, but the deck is starting to blow up in other formats as well. In Pauper, Infect gets access to Invigorate, probably the best pump spell ever printed when infect is a focal keyword ability. The Pauper Infect decks are built to end the game as quickly as possible; cards like Groundswell and Invigorate can help this deck win the game as early as the second turn. Here's a look at Jdreylick's version:

Pauper is more diverse and popular than it has been in some time. It's a great format to get involved with if you're looking to begin your journey into the Magic Online world of Constructed. The format is diverse enough that you can play whatever you're most comfortable with. Just be sure to have a reasonable amount of hate for Bushwhacker Combo and Infect.

Last week, I included a match report and it received mixed reviews. I'm constantly trying to improve this column and make it as informative and accessible as I possibly can. Be sure to shoot me an email or hit the forums with any questions, comments, or ideas.