From Theros, With Love

ave you been playing with Theros? 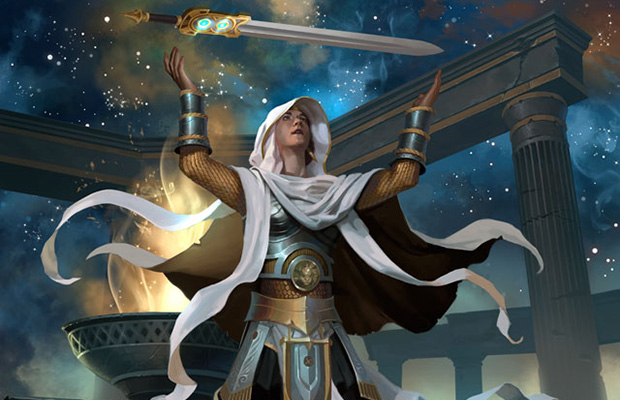 I'll admit: I was both excited and skeptical as I ventured into the set. Monstrosity seemed sweet but expensive. Bestow looked solid but really confusing. Would I ever have enough spells to make heroic work? 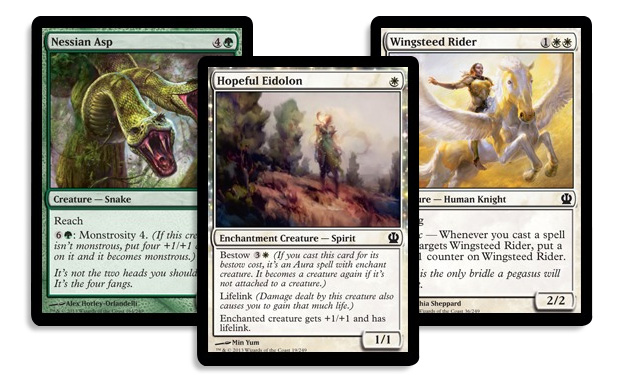 Of course, as soon as I dove into the action all my worries melted away. Keepsake Gorgon won my monstrous heart multiple times over. Baleful Eidolon stymied opponents regardless of the mode I cast it in originally. Agent of the Fates assuaged my concerns that heroic needed too many spells to be used to great effect. 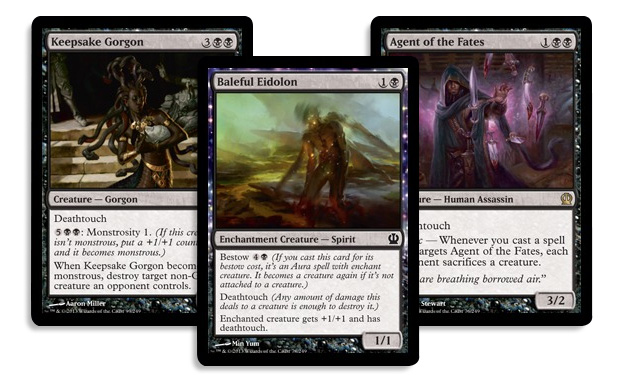 And that was just from playing a little Theros Sealed and Draft. As I played, heard, and saw more of the set, the pile of "Add this to my Commander Box" cards from Theros grew tall, and I realized that I couldn't be alone. While I certainly have a few favorites from the set, there was so much more than what I was seeing. This is what you saw too.

While each of Theros's Gods and the assorted legendary creatures next to them are all sweet for Commander, there was plenty of non-commander-eligible action to be had. As usual, there were a few cards that were shared by you in droves.

I love lands, and I love that you love lands too. Nykthos, Shrine to Nyx was the most common card you sent, for a variety of reasons:

Nykthos, Shrine to Nyx has made its way into Standard in a big way, and with how powerful it feels for Commander I wouldn't be surprised to see it elsewhere soon.

Tied with the Shrine is another card I expected to see a lot that you delivered on: Prophet of Kruphix. Seedborn Muse is close to the top of my "innocently awful and offensive" list of Commander cards, and the Prophet combines most of what the Muse does with some of what Leyline of Anticipation brings. Prophet of Kruphix is exactly the type of nightmare card my too-powerful-to-keep Maelstrom Wanderer deck would have jammed without a second thought. If you're planning shenanigans with blue and green, this is where to start.

Steam Augury was another favorite card you sent along, and it too has plenty of reasons attached:

One of my favorite pet cards for Grixis—blue-black-red—decks is Mercurial Chemister. It draws cards, puts fatties into the graveyard, and doesn't seem entirely scary on its own. Steam Augury feels similar, since you give an opponent the choice of what you're going to draw. It's an innocence many of you plan to prove misplaced.

A surprising-to-have-seen-submitted-so-often card that shows why Theros rocks: Fleecemane Lion. 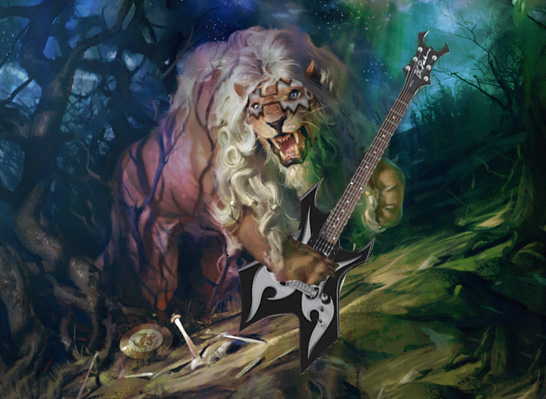 Watchwolf's new and improved cousin is something I didn't expect to come across my inbox so often, but the common thread among the reasons is "opponents can't mess with it." Hexproof is already a gnarly ability to work with, giving you exclusive access to improving your monster or shutting out easy ways of dealing with an opponent's. A Fleecemane Lion that alsogets indestructible feels like the natural extension of what Krond the Dawn-Clad decks want, or token-based Rhys the Redeemed decks like as backup: It's cheap to slide onto the battlefield early, inexpensive enough to active the monstrous ability that it can happen before Supreme Verdicts start rolling in, and small enough that it doesn't kill opponents in one shot.

Another card I wasn't expecting to see come through as often was Mistcutter Hydra. 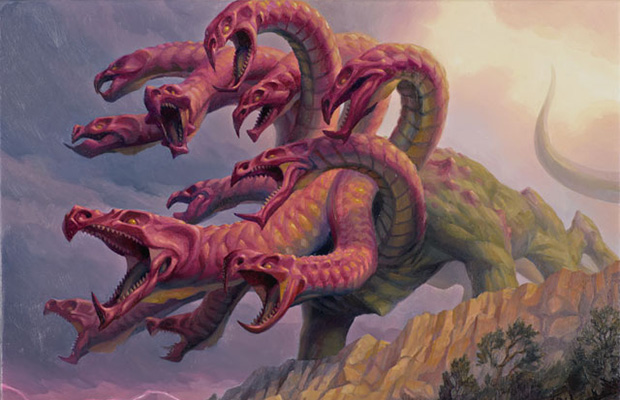 It's a targeted card that seems destined for Standard tables for the next year as a way to specifically strike blue. The reasons it's showing up in Standard today sound like the same reasons many of you are adding it to Commander decks:

Today, in shocking news: Magic players like drawing cards in every format ever. Blue has the best ways to draw cards, among other useful talents, and it's proportionally popular in Commander as a result. Mistcutter Hydra might be a narrow card meant for Standard to help keep blue decks in check, but it's also exactly what an aggressive, combat-oriented, nonblue Commander deck would want in a multiplayer game filled with decks casting Blue Sun's Zenith.

While these five cards headlined plenty of emails, they were far from the only picks passed along.

These are the non-legendary cards I'm trying out in Commander:

There's no shortage of two-color lands that come into play tapped, but there are only a few that come with benefits like those in Theros. I can't express enough how good scry feels when you desperately want a specific card in your deck, and August's point is even better: Instead of Smoldering Crater or Slippery Karst, Temple of Abandon adds to your mana and helps adjust your next draw.

The utility spells of Theros are solid too, with Hero's Downfall and Read the Bones having obvious uses for decks running mostly black and Dissolve joining its "value counter" family alongside Dissipate and Dismiss. (It's a veritable bag of Ds for countermagic!)

Funny this question should be asked, as I have already written an article about it on my Tumblr. To recap and expand:

Copying your spells is usually a quick way to earn the ire of a table. Copying others' spells for them seems like a new way enhance what Group Hug decks already do in multiplayer. It's the same type of faith that opponents will have to put into Jace Beleren: You're only going to use the ability for good, not evil.

I like that Andrew likes Burnished Hart as much as I do, and if you're playing Hart then getting to a monstrous Colossus of Akros doesn't seem so far off for any color of deck. Artifacts can help cover any deck's weak points, and those in need of a potent fatty have one to grab.

Andrew said all that needs to be said about Curse of the Swine, so here's the image of the pig/Boar token you need to collect a dozen of: 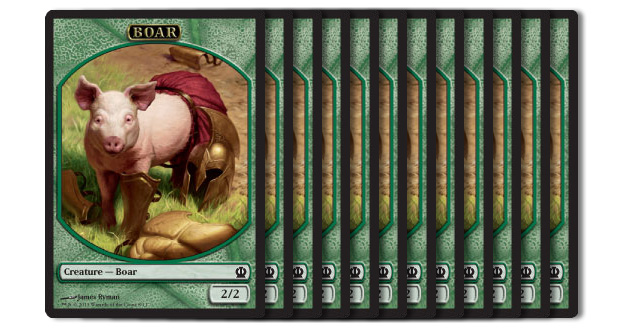 The one card I've already added to my Commander decks is Gray Merchant of Asphodel. This five-mana Zombie is one of the best life drainers and it's a common! On its own, the card nets you two devotion and only gets better the more black permanents you have. Perhaps the closest comparison to this card is Kokusho, the Evening Star—and we all know how good that card is. Kokusho is so good that the card was on the ban list for a time.

The second card I'm most interested in adding to my decks is Nykthos, Shrine to Nyx. This land is both powerful and fair, which is something really good lands rarely do. In monocolored decks this will be clearly a powerhouse ramp card. However, the conditional devotion clause will usually keep things regulated.

Thassa being printed caused me to actually build my *first* Commander deck. Onto the non-legendary creatures!

There were plenty of you who appreciated the ability to devote yourself to one color even more. Exsanguinate is a deadly way to refill your life while killing opponents. Gray Merchant of Asphodel feels like sneakier way to drain the table of life.

If you've played with Edric, Spymaster of Trest you know how good it feels to draw cards as you hit your opponents around. Bident of Thassa limits the effects to just you. While it removes the political aspect of giving everyone access to cards it makes up for it with forcing someone to clear out his or her blocker queue.

And regarding Shipbreaker Kraken: If it doesn't excite you immediately, try recalling that you can in fact shout "Release the Kraken!" as you pay its monstrosity cost. 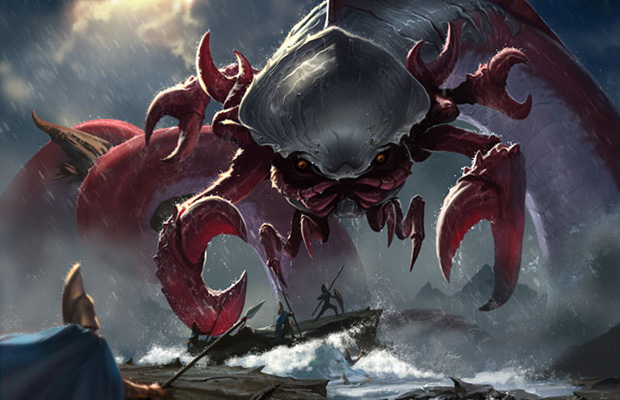 More Than One Article Can Handle

Playing Theros did more than dispel my fears: It convinced me to pile almost thirty cards to add for Commander. Aside from the common threads shared today, way too many cards to cover in one article were submitted.

That's a really good thing to say about the set, too.

Whatever you like to do, and whichever commander you choose, Theros is packed with opportunity and options. If you've held back so far I hope today pushes you over the edge, just as playing the cards did for me.

As an optional bonus, if you already started building your next deck you can include the entire decklist too! Just remember that your decklist must be formatted like so:

Join us next week when we work together to enter the hidden realm. See you then!