Magic: The Gathering, huh? Well... I guess I could have guessed you would say that. Got another guess?

G.I. Joe, huh? Yes, yes I suppose recruiting The Rock (The Rock that inspired Sol Malka's The Rock deck no less) and Bruce Willis might do that.

What I was thinking about in the context of Modern Week was actually my favorite childhood Hasbro brand: Transformers. 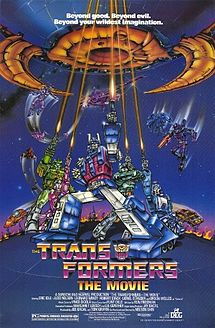 Transformers: The Movie is to this day one of my favorite movies. My kid sister and I still chuckle over the opening line "The year is 2005...." Back in 1985, that was far enough into the future that the idea of flying cars, moon bases, and giant orange cities that could shift and tumble into defensible fortresses would seem plausible. Hot Rod's fumble, costing Prime his life, was soul-shattering (although I was glad to have had "the Touch").

What does this have to do with Modern?

Modern is this great format that has transformed, tournament to tournament, to look like many different formats implying any number of different attitudes and intentions from on high, although always with the same intent. For a non-rotating format, Modern really feels like a format that is a car one day, a giant robot the next, then a tape deck, a fighter plane, a jaguar-slash-cassette tape: you know, diverse.

The Extended Without the Broken Cards

Modern's big Pro Tour debut was at PT Philadelphia 2011. Here are some of the then-banned cards:

Modern at its first Pro Tour didn't really know what it wanted to be... but it seemed to have a good idea of what it didn't want to be. The idea with the extensive banned list of past flagships was intended to foster format diversity. Then-recent Extended tournaments were being won hither and yon by Stoneforge Mystic and Jace, the Mind Sculptor. Nobody but nobody (except presumably Sam Black and Paulo Vitor Damo Da Rosa) ever had any emotional reaction but horror and revulsion at a second-turn Bitterblossom. Modern first time around would have none of these flagships!

It was interesting that both methodical cards that encouraged long games (Stoneforge Mystic; Bitterblossom; Sensei's Divining Top; Jace, the Mind Sculptor) and super-fast cards like Chrome Mox and Dread Return were banned preemptively.

But what didn't get the preemptive axe for Pro Tour Philadelphia were any of the cheap search cards. Quick question... at the height of Caw-Blade in Standard—you know, when players were clamoring over Jace, the Mind Sculptor and Stoneforge Mystic—what card saw more consistent Top 8 action than either of those?

And Preordain was a four-of that helped drive Samuele Estratti's Splinter Twin win:

The PT Philadelphia Top 8 was a brawl of mostly UR combo decks, Pyromancer Ascension as well as Splinter Twin; a couple of aggro/linear aggro decks, and an inventive Infect combo deck that, like the UR decks, packed a Preordain.

Some pundits called Modern a Legacy without Force of Will as a safeguard.

The solution at that point was to invoke the first of Modern's many transformations; and cheap search cards Ponder and Preordain joined the ranks of Glimpse of Nature, Hypergenesis, and Mental Misstep on the banned list.

We went from porting a two-card infinite combo (Standard) deck to an inheritor of multiple Extended progressive card-advantage and board-control traditions.

Magnan's deck was everything to everyone... a midrange deck that built to an inevitable endgame; hell on combo decks with its limitless reserve of discard; stacked with high-quality creatures; possessed of any number of awesome possible proactive directions to go.

Ponder and Preordain might have gone the way of the dodo in Modern, but one one-mana cantrip that was left in place was Serum Visions.

Add that together with a then-freshly released new eight-pack of Innistrad cards, Delver of Secrets and Snapcaster Mage, and you get a ferocious strategy for the much-decorated Antonino De Rosa. Again, Modern showed us a radical shift... from midrange to a blue tempo deck with control elements. If the stated goal of all those bannings was format diversity, I think we can say mission accomplished.

Jund variations had been posting Top 8s for months, but they really rose to prominence at the 2012 Magic Players Championship. Yuuya Watanabe took down the streaking Shouta Yasooka in the sixteen-man finals, showcasing a combination of the flexibility of the Jund deck and the power of one Olivia Voldaren against an opponent relying on largely cheap utility creatures.

For his part, Yasooka very nearly won with an inventive deck that looks like almost nothing else in Modern.

Shouta's deck was like a perfect storm of cool interactions. With Æther Vial, it solved the problem of having enough mana to deploy all your two-for-ones. Back in the day, we used to complain about the opponent drawing one more Cryptic Command than we did... Shouta's deck could play Cryptic Command nearly a dozen times. To get there, it could control the opponent's onslaught with Lightning Bolt and Vapor Snag.

While Shouta's deck didn't ever really take off, Jund took over a number of large events.

What rules a Modern world that has moved away from combo strategies and deck searching? Individual card efficiency... something that Jund had in spades.

In addition to having some of the most efficient removal in the format, Jund packed many self-contained sources of card advantage, such as Liliana of the Veil, Bloodbraid Elf, and Dark Confidant.

As Jund became the Deck to Beat... how did you beat that, exactly?

The finals of Grand Prix Chicago saw two similar Jund-decks-with-Lingering Souls face off in the finals. Lingering Souls was not just another card in the same vein as the rest of the Jund powerhouses... it was a card that was good against the rest of them. Lingering Souls could take the edge off of Bloodbraid Elf. It was fabulous against Liliana of the Veil ("Sure, make me discard this"); and as it has been in formats various, Lingering Souls was a great stop sign against aggro decks. Those four spirit tokens just lived to die in front of Tarmogoyf or Arcbound Ravager in order to buy time for the Jund deck to set up its more powerful single card efficiencies.

Willy dug for the literal, scripted, answer to Lingering Souls.

What about the Dragon designed specifically to get past that card?

And to get him there? Willy added a couple of Lotus Cobras. With Lotus Cobra on the battlefield at the start of turn three, one Marsh Flats could send him straight to five mana!

My favorite deck from Grand Prix Toronto was Collin Morton's. A straight WU board control deck with—gasp—no counterspells main deck. What does it say about a format, especially one that started with a stack of Pyromancer Ascensions and Deceiver Exarch Splinter Twins, to play a deck optimized to beat Jund with the classic Spreading Seas... and absolutely no combo coverage to start?

I would actually say it was a good thing.

Collin knew how focused the format had become on Jund, and Jund-versus-Jund, and crafted an anti-Jund that rewarded him with a Grand Prix Top 8. All signs pointed to Jund... so why worry about combo?

Stanislav Cifka made his own brilliant set of predictions at Pro Tour Return to Ravnica a short time earlier. Cifka returned not to Ravnica's, but to Modern's roots, as a format where combo can thrive.

Without Ponder, without Preordain, Cifka crafted a super-fast combo deck that ran a very different set of one-mana search cards (his Stars, Spheres, and Spellbombs). He rode the redundancy provided by Faith's Reward over just Second Sunrise; knowing how popular decks like Jund were, he played a deck that could dodge all their Terminates and most of their Abrupt Decays.

Too many Bloodbraid Elfs!

Par for the course for Modern... and just another iteration for Jund.

Eric Froehlich just pushed the white splash to Jund and replaced four-drop Bloodbraid Elf with its onetime Standard contemporary, Ajani Vengeant, which proved essentially as single-card-efficient as ever.

The same Top 8 saw a repeat of Cifka's Eggs strategy and the window opened for a kind of beatdown deck that can only exist in a non-rotating format like Modern.

Yukuhiro married old and new beautifully with this one. He played all the kinds of lands. Bam! Tribal Flames for five! He played a heavy redundancy of green one-drops, including one of the best creatures of all time (Noble Hierarch) and its maybe-better inheritor (Deathrite Shaman). Together, those creatures could force down another relative newcomer, Geist of Saint Traft, with impressive speed.

What an offense! Attack for 7 (how great is swinging with a 2/2 and a 4/4 and still getting one of Noble Hierarch's exalted triggers? Soften the other guy up; Tribal Flames for the win!

See what I said about transformation up top? Giant robots into jaguar-cassette-tapes?

That's what Modern means to me. This was—and remains—a format that was built, engineered even, for diversity. It is a huge format that has always aspired to letting players actually play the many different strategies afforded by its many different cards. This diversity has been more-or-less granted, such that even when our overlords in Renton, WA, have brought the banhammer down on this strategy or that, players have always found enough sunlight for their various Lingering Souls, Eggs, and Ajanis.