elcome back to Perilous Research, DailyMTG.com's exclusive Magic Online column. Theros Prerelease events start tomorrow on Magic Online! That means we're just a few short days away from Magic Online post-Theros Standard events. Last weekend, a few hundred magicians descended on Worcester, Massachusetts, to battle in the first major post-Theros Standard tournament. The StarCityGames.com Standard Open in Worcester gives us a more concrete snapshot of the new expected Standard metagame. Today, we'll be using the information from last weekend's event to gain a strong understanding of the decks that will likely be major players in the early weeks of Theros Standard. 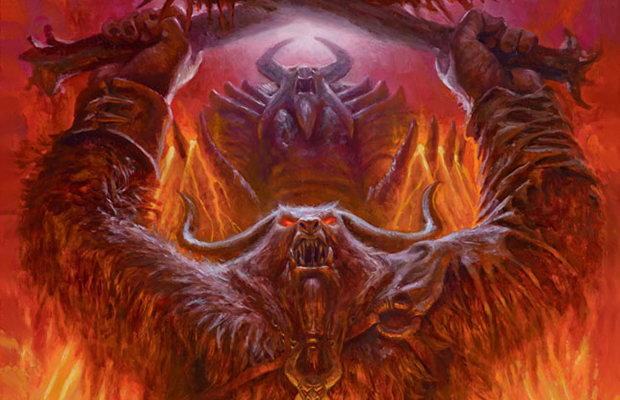 There are a lot of different decks that emerged out of last weekend's Standard events. Of those, we have seven archetypes that we can confidently use as a baseline for the new Standard. These lists can and should be used as a gauntlet to test our newest strategies against. In an effort to test and temper new brews, we should put all these decks together and crash our newest ideas into them over and over.

Let's jump right into the decklists!


The winning decklist from the StarCityGames.com Standard Open in Worcester, Massachusetts, wasn't a secret brew; after ten rounds of Swiss and a Top 8, Mono-Red was the last deck left standing. Mono-Red is fast, consistent, and offers a good amount of reach to seal the deal once its opponent stabilizes. Most of the card choices here are fairly obvious. Fanatic of Mogis works extra hard in a deck that features Ash Zealot, Burning-Tree Emissary, Chandra's Phoenix, and Boros Reckoner. The latest Minotaur sensation will often steal games out of nowhere by chunking an opponent for 6 or 7 damage the turn it comes into play. Sometimes, you won't be winning the game the turn you cast Fanatic of Mogis, but you may find yourself Flametongue Kavuing a Planeswalker.

This deck's greatest strength is its consistency and access to Burning Earth against the three-color strategies. Mana bases aren't quite as solid as they were in pre-Theros Standard, and we'll see players being generously rewarded for the consistency of a one-color deck. A lot of players felt that Anger of the Gods may push Red strategies out of contention, but there doesn't seem to be an archetype that successfully utilizes Anger of the Gods yet. I expect cards like Flames of the Firebrand and Soldier of the Pantheon to become more popular in the wake of the Red deck's success, but we can be sure that people will happily be burning each other to death in Standard Daily and Premier Events on Magic Online in the coming weeks.


My good friend, the wisdomatic Max Tietze, made it all the way to the finals of the StarCityGames.com Standard Open with a White-Blue Control deck. Tietze kept some risky hands in the finals and didn't get rewarded, but he successfully proved the validity of this archetype with his finals appearance. Esper seems to have been the control strategy of choice at last weekend's events, but Tietze chose to play fewer colors to increase the consistency of his pile and avoid losing to a resolved Burning Earth against Mono-Red, Red-Green, and the White Weenie decks that splash for the big enchantment in their sideboard. The deck trades cards with the opponent and eventually pulls ahead with Planeswalkers and Sphinx's Revelation. Supreme Verdict helps stabilize the board against aggressive creature decks, while Celestial Flare and Azorius Charm keep our life total high enough to withstand a flurry of burn spells or Fanatic of Mogis.

Jace, Architect of Thought has been a fringe Standard card for a long time. However, it is now abundantly clear that Jace's latest incarnation is going to be a huge force in the new Standard format. Elspeth, Sun's Champion is quickly being recognized as one of the most powerful cards in the new Standard format; the card stabilizes the board completely on the turn it enters the battlefield and threatens to ruin the day of any player bold enough to have multiple giant monsters out. Yoked Ox may seem like an awkward card for a Constructed deck, but the 0/4 cattle is the perfect card to block on the earliest turns against green-white and red aggro decks. Again, we can expect this deck to be very big in the coming weeks on Magic Online.


Green-Red Midrange seems like one of the most powerful decks at a glance. The deck features a lot of strong creatures and a beautiful suite of planeswalking power. The deck goes slightly bigger than the most aggressive strategies and is able to force the hand of its control opponents in an effort to resolve a game-changing Planeswalker like Domri Rade or Chandra, Pyromaster. The deck recovers well from Supreme Verdict thanks to Stormbreath Dragon and its Planeswalkers. The deck even has access to a few copies of Burning Earth in the sideboard for when it's forced to battle against multicolored monstrosities. We can expect this to be a force in the early weeks of Theros Standard on Magic Online. In fact, I wouldn't be surprised if this archetype became the most feared deck Standard has to offer in the coming weeks.


White-Blue Control has consistency, but playing black gave players access to Ashiok, Nightmare Weaver, one of the most powerful cards in Theros. This deck functions similarly to the White-Blue deck we looked at earlier, but the addition of Doom Blade increases the deck's ability to combat Stormbreath Dragon; additionally, Ashiok, Nightmare Weaver dominates any game where the card is played into a relatively empty board. The latest three-casting-cost Planeswalker may seem like a liability against the most aggressive decks, but Ashiok will often be difficult for players to kill from 5 loyalty without spending a card, and even something as seemingly harmless as a Burning-Tree Emissary getting flipped into play can result in the Esper deck doing completely unfair things like turn-four Elspeth, Sun's Champion. Ashiok, Nightmare Weaver and Thoughtseize are very powerful cards, but I'm not sure it's worth the risk to play black if we expect to see as much red as we do.


Naya Midrange is similar to Gruul Midrange, but the deck gains access to Boros Reckoner, an absolute house against the most aggressive decks, and Selesnya Charm, a new format all-star. Boros Reckoner combos nicely with Domri Rade and Selesnya Charm gives the deck a solid card with three very useful modes, including an out to Obzedat, Ghost Council. Flames of the Firebrand makes an appearance in this sideboard as a card that absolutely demolishes red and White Weenie decks by almost always netting at least two creatures for a single card—and often three creatures. Splashing a third color seems more reasonable here than in the control deck because we get Boros Reckoner, which is strong enough against aggressive decks to warrant paying a little extra life with our lands.


White Weenie will always be a deck, but it becomes something special when we get cards like Spear of Heliod and Soldier of the Pantheon. Soldier of the Pantheon is so far above the curve of what we're used to seeing at that casting cost; the card is a beating against other aggressive decks and helps the White Weenie deck get on the board quickly against its control opponents.

Boros Charm is especially impressive in this deck: The card can be used to better-than-counter Supreme Verdict or Anger of the Gods and the ability to dome an opponent for 4 damage is startlingly efficient, especially when drawn in multiples. Judge's Familiar seems weak to me, but it might be the best available card for that slot. This deck looks like White Weenie, it plays like White Weenie, but it also has reach and one of the better anthem effects ever printed. This deck may be popular in the early weeks and it's probably worth your time to test against it, especially if you plan on facing off against Craig Wescoe.


Green-white aggressive strategies were very obviously going to be strong in the early weeks of Theros Standard. The deck has access to some of the format's best cards: Voice of Resurgence, Loxodon Smiter, and Selesnya Charm are incredible here. Fleecemane Lion gets to swing its weight around for the first time in the new Standard. It's worth noting that a monstrous Fleecemane Lion with Unflinching Courage on it is going to result in victory almost all the time. A 6/6 lifelink, trample, hexproof, indestructible is pretty hard to beat where I come from.

Voice of Resurgence is one of the best cards against the control decks and Fleecemane Lion's monstrous is an effect that the control decks will need to address if they want to win a game without Elspeth, Sun's Champion or Ætherling on the sixth or seventh turn. I expect the aggressive Selesnya decks to begin splashing a third color in the coming weeks.

We now have a solid understanding of the expected metagame for the upcoming Standard events on Magic Online. Using this information, we can test our newest strategies and brew up a masterpiece that can dominate the earliest Theros Standard events. Remember, the Magic Online Theros Prerelease events start tomorrow. Don't miss your chance to be part of the action!