f Command Tower is the only column you read then you've been missing out: this entire week has been Commander Week, and there's been plenty of good reads about your favorite format. 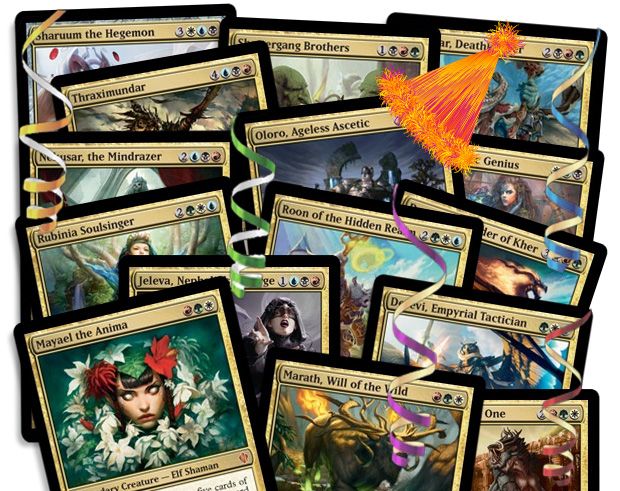 There are ten new commander choices with tomorrow's Commander (2013 Edition) release (more on all of them next week), which means there's going to be plenty of new Commander decks being built over the next few weeks. One of my favorite articles from this week was Bruce Richard's "It's a Process," a walkthrough of his method of building a new Commander deck around a new commander.

It's a process after my own heart:

While it doesn't dive into specific questions around, say, building your deck with respect to the cards you have available, it is the core method of how most of us get from square one to a battle-ready Commander deck. Looking for related themes, similar cards, and obvious additions that fit are surefire ways to flesh out a 100-card stack.

But this personalized method isn't the only way to arrive for Commander night with a deck ready to go.

Frankenstein's Monster is a Zombie, Right?

Let me set this up. You're reading this online. That means you care enough about Magic to look up articles and take some of your non-gaming time to spend on learning more about your gaming. It may seem innocuous but it's a significant hurdle that isn't actually required for enjoying Magic. In fact, there are plenty of players who can pick up the game and play with friends for years without pointing their web browser to anything Magic specific.

So thanks for that. I appreciate it.

Since you're reading this you're likely aware that I ask for responses every week. One theme that I've seen across responses is that many of you enjoy seeing and sharing entire Commander decklists. Time and time again, I'll get a brief blurb answering the weekly prompt (as requested, so thanks again!) followed by "and here's what the deck looks like:" with a complete 100-card list. The most popular articles I've received feedback on are where we look at many different Commander decks .

Are you connecting the dots here?

While Commander is arguably the most personal format in Magic, where you can build almost any kind of deck to share almost any kind of idea, it's still daunting to start from scratch. Handy, thematic guides built on tried-and-tested methods is the usual recommendation, since what I don't want to do is take away your opportunity to be personal. It's your deck to decide, not the deck that's already defined to be correct.

What if you weren't interested in personalization as much as trying something different to see how it works?

If you've played competitively you probably know you can find current decklists for any format online. From event coverage of Grand Prix and Pro Tours to a daily dose of something different, digital articles are where you find a deck to play. It isn't that decks aren't personal in non-Commander formats, but finding a deck "that just works" is no longer optional: You're trying to win your next event, after all!

I believe (since it's not really a testable hypothesis) that's why decklists for Commander seem to be as popular as those for other formats. Many of you enjoy the thrill of building and executing on your personal vision for a deck, but sometimes you just want to find something different to play today.

The best name that I can find to describe it is the Frankenstein approach: Like a (mostly) benevolent scientist, you seek out the body or parts needed to finish your creation. It's not wholly novel—you're using someone else's pieces—but it's still something you choose to play. Whether it's an entire deck lifted wholesale or most of it cobbled together from what you have handy, when you want a complete deck in a hurry, starting with a finished deck will always be faster than building one.

It's why Commander (2013 Edition) is whole decks and not a Modern Masters–type set that includes new cards for Commander.

Adding Lighting to the Table

Let's look at an example. I asked for your ideas around building a Roon of the Hidden Realm deck after sharing an article about building around commanders that attack. It was a not-so-subtle nudge to avoid the most obvious way to use Roon: flickering, blinking, and reusing creatures with enters-the-battlefield abilities.

I am currently playing with a flickering deck that runs Jenara, Asura of War as the commander for colors and a Plan B punch. I would absolutely swap her out for Roon as soon as he is released. Decklist below. 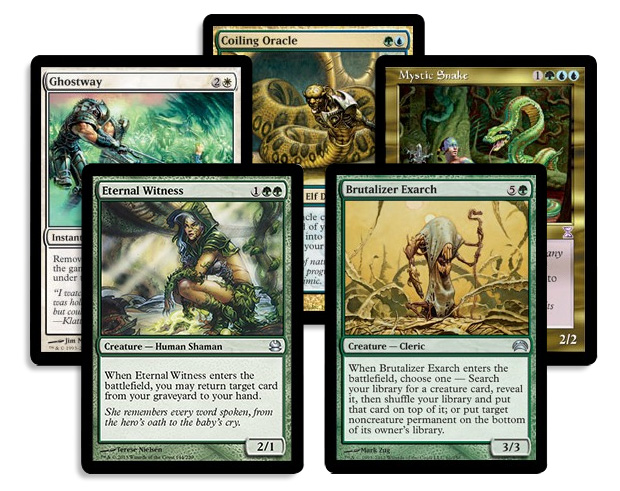 Galen's Roon of the Hidden Realm

Almost unanimously, the submissions focused on bouncing creatures in and out of play for value. Make tokens, gain life, destroy opponents' things, counter opponents' spells—it was all there in spades. The real question I was left with was what flavor of value was wanted most.

Galen's deck is the archetypical approach, focusing on maximizing the benefit created by Roon's ability. Grab some extra lands, stymie opponents' plans, and blow up everything that Roon can't handle with help. Don't like some of the choices Galen made? Try another version.

I actually built a Bant flicker deck a while back, and I've just been waiting for a commander to take the helm that really fits the theme. I base mine around as much value off of each flicker as possible: so recycling, recursion, and enter the battlefield triggers abound.

The five biggest players, I'd say, are these: 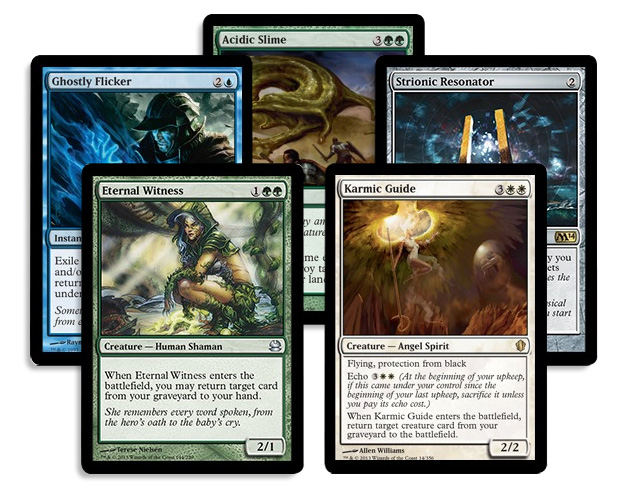 Here's the full decklist for those interested. Quick note: there are some notable cards excluded (e.g., Solemn Simulacrum) since other decks have laid claim already.

Aric's Roon of the Hidden Realm

Different ways to make tokens, ramp up our mana, destroy opponents' things, and even make our mana. While it's not entirely different (there are always staples that lend themselves to certain themes) much of the deck draws from a different set of cards. It still maximizes Roon of the Hidden Realm and shows you that if you wanted to piece together your own take you have a smorgasbord of deck parts to build from.

What if strictly bouncing/flickering wasn't your cup of tea. Is there another Roon deck to draw from?

Having done the blink deck twice already with Sharuum, the Hegemon and Lavinia of the Tenth, I thought I'd rather go in a different direction with Roon of the Hidden Realm. It's a direction that makes good use of his ability but doesn't depend or focus on it: Soldiers Tribal.

The five cards from my decklist that best demonstrate what I'm going for? 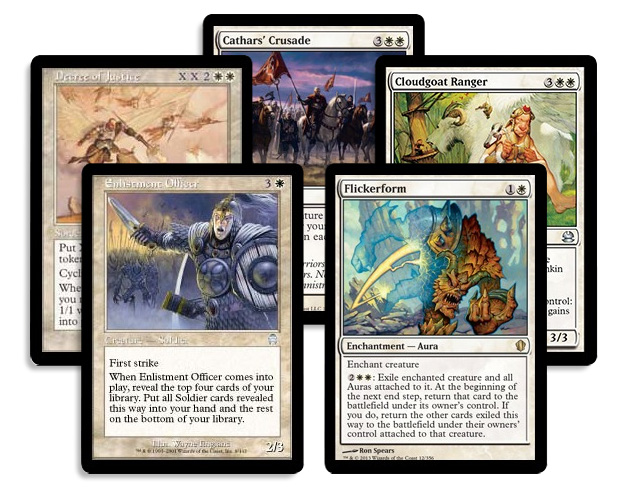 Here's my first shot at a decklist. Since the vast majority of Soldier creature and support cards are white, the deck is focused on that color with only a splash of green and blue for Roon and one other card.

John's Roon of the Hidden Realm

Tribal decks often run out of steam quickly: Once all your creatures are played out you're in a dominant position, but one Supreme Verdict later and the plans are ruined. John's approach is different. While it still draws on some overlapping cards, the mana base is shifted to support all the white Soldiers thrown into the mix. Using Roon to recover and expand an army ensures that whenever you need the flickering support it's just a casting of your commander away.

Grabbing a ready-made deck or decklist isn't wrong for any format, even Commander. Bruce's plan is, as always, a sound one, but what going online or to a preconstructed deck allows you to do is start playing immediately. It's impossible to play Magic without a deck, and aside from borrowing one your friends might have, finding a list to try for yourself is definitely a way to solve the problem.

Possibly the best feature about going the route straight to a decklist is that it doesn't have to stop there. Bruce's third step was tweaking the deck you build. Once you play the preset list there's nothing that stops you from changing it in ways you want. While you didn't choose the original theme or cards, adapting it to be personal to you afterwards is as good as starting from tabula rasa.

If you have the time to build out your own deck, Bruce's method is exactly where I'd start. For every other time, pick up a preconstructed Commander deck tomorrow and adapt it however you see fit.

While we've spent a lot of time looking at how we build and grow our decks I've never heard much around the following questions: When do you decide to take apart a Commander deck, and why?

I've taken decks apart for plenty of reasons, but I want to know about how you handle the issue. Do decks get too strong, consistent, or boring? Do you constantly try new commanders and shuffle your cards around? Do you not take decks apart and keep an expanding library of decks on hand?

Just like there's no right answer to building a Commander deck, how you handle the end (or lack thereof) of your decks is open, too. Join us next week when the latest hits just keep on coming. See you then!