few weeks ago, in this very column, we wrote about our friend Matt Boccio battling through a star-studded (or at least contender-studded) Top 8 on the way to taking home a coveted Pro Tour invitation in Philadelphia, PA. His weapon of choice: Mono-White Kithkin. Matt said that part of his decision to go Mono-White Kithkin over Black-White Kithkin was that Glorious Anthem is better than Zealous Persecution. It seemed like such a good impetus to such a good deck decision at the time ... but in light of today's preview card? His reasoning goes from great to almost comical. 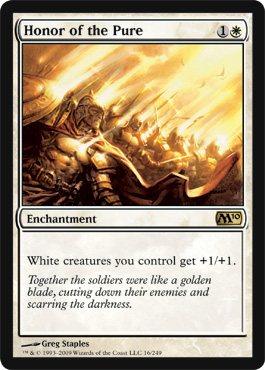 I think you'll join me in a good, old-fashioned wow.

Honor of the Pure does laps around Glorious Anthem, at least in Mono-White Kithkin (and so on). Superficially, the M10 enchantment costs W less, or 1/3 Glorious Anthem's converted mana cost less, but functionally, in Magic, a step from two to three is almost two mana, not merely one (just think of all the two-land hands you've kept, but that didn't develop, at least not quickly). Being a mana cheaper at this stage of the game is just too exciting for words ... But we'll try. Just imagine:

Turn One: Goldmeadow Stalwart
Turn Two: Honor of the Pure; in for three.
Turn Three: In for three, Spectral Procession!
Turn Four: Dare we dream it? Ajani Goldmane. 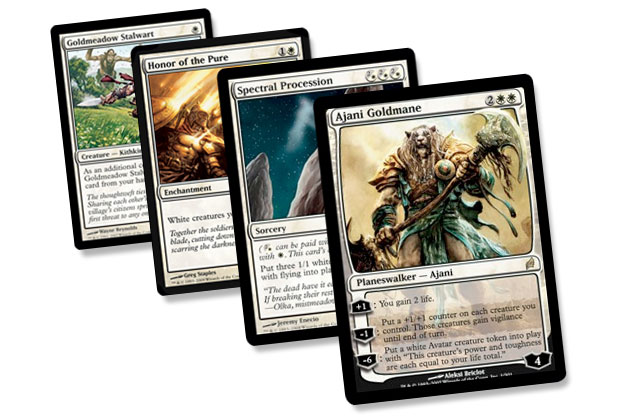 Don't you feel filthy and disgusting just thinking about that kind of a sequence? We feel all dirty, almost like we were playing a combo deck. It's so good! Even if you don't have the Ajani Goldmane, your Spectral Procession tokens are going to be in for Ball Lightning-like damage, and with that perfect curve, we are talking nine-sies, and tirelessly swinging nine-sies at that.

That one mana separating Glorious Anthem and Honor the Pure makes all the difference—even given a card with the playability of a Glorious Anthem—specifically for a deck playing Spectral Procession. 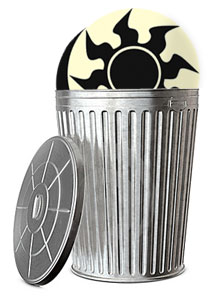 Besides the obvious discount from three to two, the lower mana represents better future mana efficiency. Imagine the above scenario, but you played something else on turn two (say a Knight of the Meadowgrain). You ran out the Spectral Procession and have four mana available on turn four. If you played Glorious Anthem at this point, you would, in all likelihood, simply lose your fourth mana. You haven't done anything with it, and most of the time, you aren't in a position to do anything with it; there is no difference between your not tapping it and not playing it at all (except that you might have the mana to play Cloudgoat Ranger on turn five); however, if you had Honor of the Pure, you could afford to play two copies (if you had them), or at least Honor of the Pure and another two-drop.

That is so interesting to me because back in 1998 or so when Glorious Anthem was first printed, I considered it a godsend for these kinds of decks. Superficially, Glorious Anthem was a card that could pump whatever creatures were on your side of the battlefield, but my deep dark motivation was actually that I just didn't like Crusade; no, I never liked Crusade. I understood that Crusade did something, made my guys bigger, but I was always suspicious of it. What if they are also playing a white creature deck? I would ask. Of course they were never also playing a white creature deck; it just wasn't done in those days. But still, I never ceased being suspicious, and my inner moral compass forbade me from playing Crusade even when I travelled the East Coast as a slinger of Serra Angel and Order of Leitbur.

But with Honor of the Pure, we are no longer subject to this dilemma of the imaginary mirror match.

Is Honor of the Pure strictly better than Crusade, therefore? This time ... I think we're going to give it the thumbs up! The mana cost is slightly easier to bear, and the fact that it only pumps half the white creatures on the board is actually a boon in this case. What is even more amazing than the fact that Honor of the Pure is more or less better than Glorious Anthem is that it is strictly better than the original two-mana version!

Top Decks is not a design or development column, but we have been playing Magic for over fifteen years and we've noticed a thing or two in that time. Here is a rundown of some of the subtleties that we've gleaned looking at Honor of the Pure and the cards that surround it:

The second mana being colorless doesn't really matter as much as most players are probably making out. This card has a heavy incentive to be played in a heavily, if not wholly, White deck. You could probably muster

(as per Crusade) anyway. The second mana's being colorless actually creates an interesting design space; you have more room to play cards like Mutavault. Ironically unlike the two Mutavaults you see in most Standard Kithkin decks, the ones next to Honor of the Pure won't be pumped, as with Glorious Anthem.

The one-sided functional improvement actually matters more than you might initially guess. We look at a card like Honor of the Pure and see it being super-awesome the way it is coming to us, but it might have been a centimeter from Constructed unplayable printed with Crusade's original text, at least with Lorwyn in the mix. Sound preposterous? Kithkin-based White Weenie decks already have a two-mana Crusade-like effect in Wizened Cenn ... Why, then, make room for this one? Creature-pumping effects have progressed to be more and more one-sided in recent sets. Look at Imperious Perfect or Wilt-Leaf Liege. These are one-sided effects and to be competitive in the metagame marketplace against awesome creatures (never mind awesome effects), Honor of the Pure almost had to carry similar language. One-sided has become the new default.

White Weenie is dead. Long live White Weenie! If you thought Kithkin was going to go the way of the dodo in Standard with next fall's rotations ... Well ... You would be right. No more Lorwyn or Shadowmoor means no more Spectral Processions, Cloudgoat Rangers, or threats with the actual creature type Kithkin. However, my guess is that with Magic 2010, White Weenie—even if it is not the Kithkin variety—should be just fine. Case in point, Elite Vanguard (from the Visual Spoiler). The archetype should be just fine, especially with Honor of the Pure making life difficult on a whole spectrum of foes. 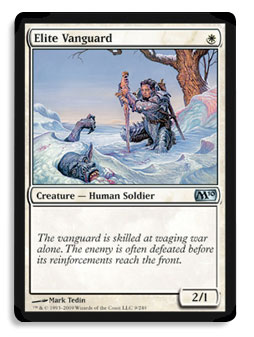 But before that point, Honor of the Pure should be one of the best pairings ever with Spectral Procession, one of the format's defining super-threats. How does it line up with some of the other cards and shifting incentives in the upcoming format?

Infest and Volcanic Fallout: Honor of the Pure is fast enough (potentially) to blank three-mana sweepers that merely deal with 2 toughness. Glorious Anthem did the same thing, but being a turn slower, might not have had the speed to anticipate and pre-empt the Fallout. With Earthquake coming back, this could be a real issue. Instead of watching your opponent use the third turn to put all 2-toughness white guys into the graveyard, with Honor of the Pure, you have a legitimate shot at a Time Walk (or even longer if the opponent is stumbling).

The return of Lightning Bolt and Ball Lightning might make this a great time to be playing White Weenie. Brian David-Marshall used to say that there was a kind of person who wanted to play White Weenie; the justification was that you would beat every red deck you faced. You slap a couple copies of Honor of the Pure down, and your whole squad is out of Lightning Bolt range, with or without Burrenton Forge-Tender. 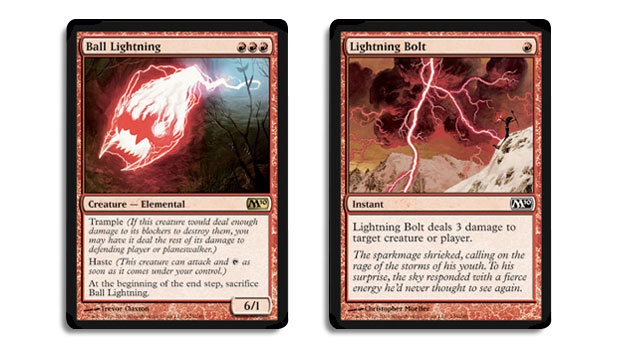 All in all, I think that we can agree that Honor of the Pure will prove to be a fabulous and exciting card that will be a tournament staple so long as White Weenie decks are viable in the format. This is an enchantment that is better than two different longtime favorites, both cards that have appeared in high positions during Sunday Pro Tour play. Honor of the Pure will help boost weenie creatures past the removal and card advantage of control decks by making any additional creature a more significant threat, and will punish beatdown decks by racing while making their removal less meaningful.

Get ready to beat down.

The first twenty people to purchase a Magic 2010 booster box from certain locations will get a foil, alternate-art promo version of Honor of the Pure, like so: 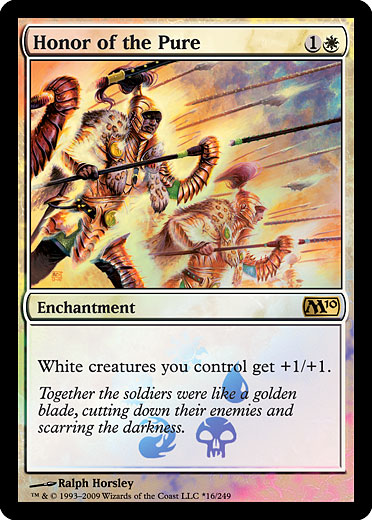