f this doesn't quicken your Pulse, you're already dead (and so are you).

My first Alara Reborn preview card is a whopper. Check out Maelstrom Pulse: 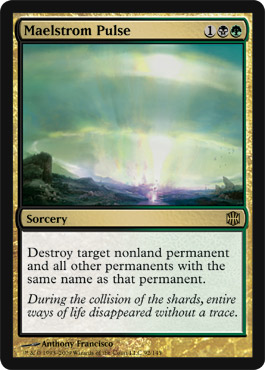 Now many Magic cards are designed in such a way as to tug at our memories... so that we recall other cards with sometimes similar mana costs or functionalities. We "attack for two" with "Grizzly Bears" and squint our eyes evaluating "Grey Ogres" as we pore through each new set looking for the most appropriate "Bolt" to slot into our deck lists.

Maelstrom Pulse, by its black multicolor, by its three mana, and by its flexibility, similarly calls up fond memories in each of us. Is it a Vindicate? A Putrefy? Something else? Something different? Something better?

The comparisons to Putrefy may be the most obvious. Maelstrom Pulse, after all, is the same mana cost as Putrefy, and has similar functionality. For three mana Putrefy could kill, if not everything, most of the stuff that you would want to kill; that made it a four-of staple from the very first Pro Tour where Putrefy was legal.

I would be surprised if Maelstrom Pulse didn't follow suit. After all, while Putrefy had to deal with actually attacking (rather than merely zone-jumping) Golgari Grave-Trolls (simultaneously keeping them from regenerating!) and either a lethal Cranial Plating or the Somber Hoverguard that had that deadliest of helmets strapped across its bulbous forehead, you can be sure that Maelstrom Pulse will be called upon to handle some additional types of permanents ... very likely including planeswalker.

And before we go on, it is probably important to note that the ability to destroy specifically planeswalkers is going to be an important consideration for at least control decks when they evaluate whether they want to play this card. While creature decks (or decks that can produce creatures, like Bitterblossom in Faeries, or Spectral Procession in Black-White Tokens) can just attack into a planeswalker, Counterspell-laden glaciers and monoliths often find themselves bedeviled by just the token production of Elspeth, Knight-Errant, their palms sweating at the innocuous non–Lightning Helix of Ajani Vengeant as the prospect of Armageddon looms. On balance, while a control deck generally won't break even against a planeswalker defending itself with a Maelstrom Pulse—especially as this card can only move at sorcery speed—many and most control players will be glad to get out from under Elspeth or Ajani (let alone Nicol Bolas, Planeswalker) at all, forget about being behind a turn.

So what about being a sorcery instead of an instant? The price is a mite hefty because it takes away a fair amount of defensive tactical flexibility, but the bonus is also considerable. In addition to opening up the card's targeting parameters to Oblivion Ring or the planeswalker sitting next to it, Maelstrom Pulse will do you the solid of wiping up all available Oblivion Rings (if not all the particular planeswalkers, for obvious reasons).

So when is the repeated action on Maelstrom Pulse going to come up? The development team was very careful to ban this sorcery from being able to target lands .... The results would be pretty similar to the Omega-level Ajani Vengeant ability, and no one wants to see that for three mana. Now, in Extended we sometimes see all Goblin tokens from Empty the Warrens go flying thanks to an Echoing Truth; I think that Maelstrom Pulse is most likely to over-perform in rapid fire mode when facing tokens, for two reasons: 1) Present-day Constructed Magic features a great many high-quality cards that produce token creatures, for example Garruk Wildspeaker, Spectral Procession, or Bitterblossom, and 2) by their very nature, these cards are more likely to put multiple copies of the "same" permanent into play.

On balance, I think that many players—the better ones, or the ones you might be playing later during a tournament—will be more likely to play around Maelstrom Pulse. A lesser player might get all excited about topdecking a second Figure of Destiny, but a quick look at the opponent's mana base might convince the wily veteran to err on the side of caution. No reason to risk both when one little giant can win the game all by itself.

Here are some handy rules that will help you play Maelstrom Pulse right (or at least according to the rules):

I was particularly surprised to learn that I couldn't machine gun any and all face-down Brine Elementals, Zombie Cutthroats, and Gathan Raiders all with a single spell.

Just as the comparisons between this spell and Putrefy come pretty automatically, so too do those with Vindicate. The main difference (besides the colors, which in modern Standard can be waved away with flexible lands anyway) is the inability for Maelstrom Pulse to target lands. Vindicate was an automatic four-of right out of the gates, and consistently so all the way to Extended and even Legacy, because of its complete and utter flexibility, up to and including Stone Rain support for a second-turn Spectral Lynx. One of the main reasons control players liked that card was that, while it usually got spent on something like a Kavu Titan, the option of mana-screwing someone who had just missed his third land drop was often too tasty to ignore.

As we've already said, if this card could target lands ... the ensuing splatterworks would be a mess. A really cool mess, make no mistake ... but still nothing any reasonable player would ever want to see at this mana cost. I mean can you imagine the tears flowing down the cheeks of a poor Elves player or Red Deck? Or White Weenie Kithkin? The insult would just be too great.

So who wants a Maelstrom Pulse?

The answer, I think, is tied into the second of Two Great Traditions that I believe contributed to the production of this soon-to-be-staple new spell. I know some of you thought I was talking about Putrefy and Vindicate, but in my mind, those were one together; the second is ... cards named Pulse!

I have always been a huge fan of cards like Pulse of the Fields and Pulse of the Forge. Like Maelstrom Pulse, these cards could generate incremental card advantage by counteracting the opponent's offense or "drawing another burn spell" automatically against the beatdown. These Pulses were powerful, but also gave the opponent the opportunity to play better. Believe it or not, there was a time in Standard where the opponent's opening play might be to mana burn, just to "get going" on turn one, before he had hit his curve, simply to prevent the ruin of a Pulse of the Fields later on in the game.

Maelstrom Pulse echoes this philosophy. It is a good three-mana spell that can make a lot of extra noise, especially when the opponent is not playing around it. 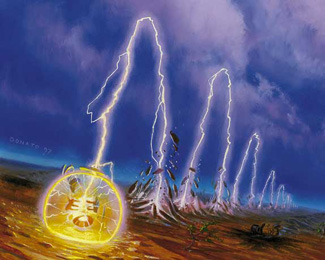 Then there is Shattering Pulse.

This is a card that reminds us, in a way, of Echoing Ruin, whose work with artifacts is exactly as Maelstrom Pulse's with almost any other kind of permanent.

But Shattering Pulse was itself a pure upgrade to an existing, perfectly playable card: Shatter!

Shatter had made Pro Tour Top 8s before Shattering Pulse, and more since, but still R&D gave us a strict upgrade ... if only for a limited time. I'll let you in on a secret about Shattering Pulse back in 1998 or so: you didn't get many opportunities to buy back the card, and you could be punished for waiting around too long. Ditto on Maelstrom Pulse. You have every opportunity to be greedy, but as with anything else in Magic, being too greedy might get you dead. 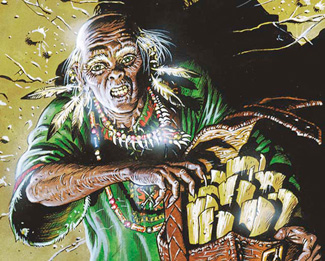 Maelstrom Pulse isn't the best card that ever was or ever will be ... but that doesn't mean we can't say it is. This would of course tie us in to the long-standing tradition of Impulse!

Impulse was one of several thematically similar cards from Visions, including Man-o'-War, Nekrataal, and Uktabi Orangutan, but not Fireblast. These cards, headlined by Impulse, represented spells that were not "broken" ... but were very good, could go into many different kinds of decks, and contribute—and contribute in different ways—depending on which stack they called home base.

Maelstrom Pulse will be the same way. In The Rock, it will be like every other card in The Rock, a tactical opportunity to generate some kind of advantage, in this case up to and including card advantage. In Five-Color Control it will be a one-card solution to Wilt-Leaf Liege, Ajani Goldmane, and Bitterblossom (or all the Bitterblossom tokens). For the beatdown it may just be a way to get a big man out of the way so that all the little guys can squirrel in to get their 2 points each.

All thanks to the Maelstrom.