"It's like the old days," Patrick told me. "Nobody has good decks!"

And by golly he is right.

These were among the best decks in the room.

I still don't recall if Finkel ended up cutting his two main deck Mountain Yetis or not. I am pretty sure the reigning U.S. National Champion was gaming with Nettletooth Djinn.

It was different in the old days.

The Hacker and Pikula Necropotence decks really were some of the best performers. And Patrick was a mile ahead of the rest of the Pro Tour with his Red Deck. These things have to be evaluated contextually. No, none of our decks were optimal. But we had very different resources. You can make fun of my gaping hole in the fourth Necropotence slot all you want, but there were people playing on that Pro Tour with Elvish Archers and Yavimaya Ants—basically an unplayable strategy in the world of Land Tax, Balance, Necropotence, and Force of Will (I know, because one of them beat me). Many of us lived in terror of a Whirling Dervish.

Have you tried to find some decent Extended decks for ideas, or to play against, recently? Standard? There are tons of Magic Online Daily events, even more deck lists, and big Open tournaments across the country (psst ... Valakut, the Molten Pinnacle is a good card). If you want to learn about Legacy, StarCityGames.com has been breathing new life into the format, Open-in and Open-out.

There are tumbleweeds blowing across the dusty Internet where information about this format is involved.

It's, beautifully, kinda-like the old days. 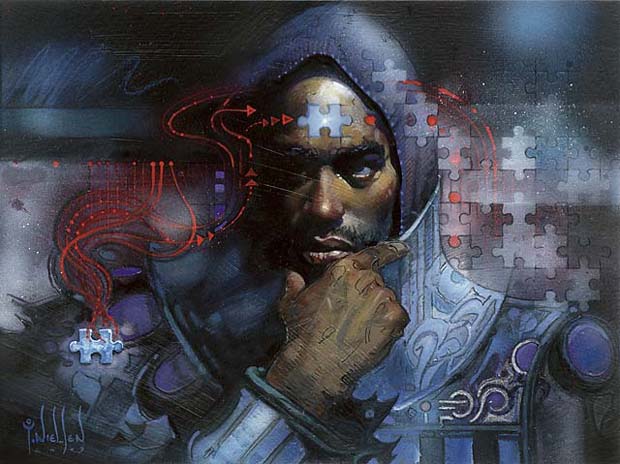 In a sense it is an amazing time to be a deck designer. With relatively little public Magic Online deck-list support, only the players who have put in the work will have access to the most-tuned lists, and identification of the most powerful strategies. In another sense, Extended is a dark and scary tunnel to be exploring.

... You never know what is going to happen next!

So why do we care?

Isn't there a reason that there isn't much Extended information? Doesn't that mean that there haven't been important tournaments (at least since Pro Tour–Amsterdam)? Why are we having this conversation?

Extended is the Day Three format of this year's World Championship, currently underway in Chiba, Japan. It might not be the ever-important PTQ format yet, but to determine the 2010 World Champion, mastering—or at least managing—Extended is going to be an important step.

So how did we get here? Wasn't there just a Pro Tour using this format?

Yes ... But this point requires some explanation. Extended has become a more dynamic format of late, involving a much smaller world than in years past. The format at Pro Tour–Amsterdam included Time Spiral block cards. This explains the ubiquitous Tarmogoyfs in aggressive decks, and the numerous methodical cards—Coalition Relic, Damnation, and Mystical Teachings—in Michael Jacob's control deck.

In return, we get Scars of Mirrodin.

This is Hunter Burton's pre-Scars of Mirrodin Elves deck from Pro Tour–Amsterdam. These little green men have lost quite a bit since Luis Scott-Vargas won Pro Tour–Berlin with the strategy (no Glimpse of Nature to draw your deck; no Umezawa's Jitte for a better Plan B than many decks' A-games), but, because of the generally smaller format, the deck remains a contender.

with three Elves, even if they should be suffering "summoning sickness!" You can use that mana to play more Elves, which will untap Nettle Sentinel (which doesn't usually have a mana-producing ability at all). Without Glimpse of Nature, Elves can no longer easily burn through its entire deck, but producing a relatively modest seven mana will let you start going big with Regal Force.

Why did we start on Elves? 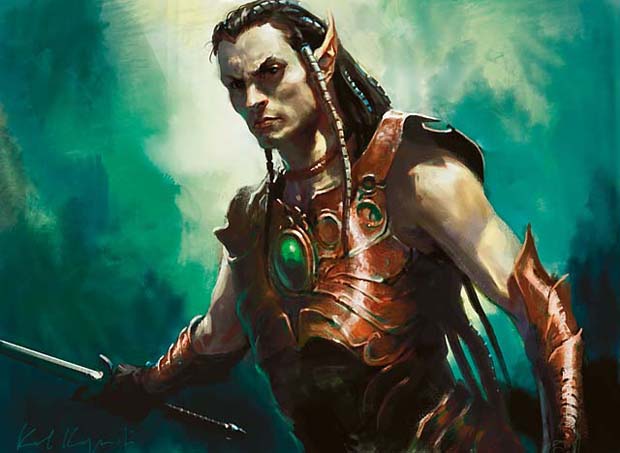 Elves may be one of the greatest beneficiaries of the Scars of Mirrodin shot in the arm. Ezuri, Renegade Leader gives you something to do with your mana immediately. Even one active Nettle Sentinel can go lethal thanks to the ability on Ezuri.

The addition of Ezuri actually makes other pre-existing Elves even better; for example Devoted Druid. For five mana you can get three incremental mana activations out of Devoted Druid, which is not a break even, but given the numerous sources of mana the deck already has, Devoted Druid can help put you over the top with just one or two non-sick potential attackers. With just one Nettle Sentinel ready to attack, you can often produce enough mana to give it 20+ trampling power.

Along with Elves in the combo wing of Extended, we have two different common combinations ... both conveniently found in the above deck.

As we lost Future Sight, please just forget that Tarmogoyf is present in Pro Tour Champ Simon Goertzen's deck and concentrate only on the Pyromancer Ascension half of the main. And when considering that half, remember that format stalwart Grove of the Burnwillows is leaving at the same time (so Punishing Fire will lose value).

You put the Splinter Twin on the Pestermite. The Pestermite taps to make a Pestermite, which, via vigorous butterfly wing-flaps and the mysteries of fairy dust, untaps the original (so it can tap again). You can do this as many times as you like to make more and more token Pestermites (all of which have haste), to set up lethal damage.

Pestermite + Splinter Twin is an easy combination to assemble. It is also very fast (turn two play Pestermite at the end of your turn, often locking you out of mana; untap, Splinter Twin). Don't be surprised to see this combo as a main deck strategy! But ... why does an Ascension deck want it? Having an additional, unique, combo out of the sideboard helps Ascension dodge specific hate: Relic of Progenitus, for example, is extremely easy for any deck to play, and can keep counters off a Pyromancer Ascension. Bojuka Bog does much the same thing and can be accessed at will by any Knight of the Reliquary or Primeval Titan deck. Even second tier countermeasures like a Leyline of Sanctity have to be considered; sure you "should" "always win" against "that" ... but what if you don't have an Into the Roil? Having the second combo, which is in-colors, but so different (infinite damage versus critical mass generation, attack versus burn spells, Red Zone versus graveyard), makes sideboarding against Pyromancer Ascension challenging for some colors—especially so, when both combos are in the deck at the same time.

Players might want to consider crossover sideboard cards like Celestial Purge or even Into the Roil that can reasonably interact with—if not crush—either side.

So ... No Grove of the Burnwillows?

There is no greater beneficiary of this particular rotation than Faeries. Previously the Punishing Fire combination could contain almost the entire Faeries deck. But now? It's on.

In particular Sower of Temptation jumps up in value by a gigantic number of zeroes.

Look for this one-time Standard boogeyman to be one of the most significant decks in the upcoming format.

As with all the decks in this article, the above Faeries deck is full of cards that aren't actually legal any more (for example Ancestral Visions).

The rotation of Mystical Teachings will affect the details of how the Five-Color Control (or however many) decks are constructed. So you won't see singleton copies of Pact of Negation (I mean other than the fact that Pact of Negation isn't actually legal any more), or main deck Celestial Purge, like Guillaume Wafo-Tapa played it in Amsterdam.

The spirit of this deck will be either Esper- or Grixis-based (or both), most likely topping up on Cruel Ultimatum and Grave Titan. Consider Michael Jacob's version, which—well before the hubbub and hype around the card in Standard—played four copies of Preordain!

The pillars of many of the blue decks in the upcoming format will be Mana Leak and Cryptic Command. Look for all kinds of decks—from Faeries to Five-Color Control to even some creature decks—to run four of each.

As you can see from the many above deck lists, we have a general idea of what might show up on Day Three. There are a couple of good combos. We know there will be control decks. But of all the deck types, the most varied—and likely most populous—will be various incarnations of creature decks.

The most glaring rotation for this cadre of decks will be Tarmogoyf. Many different decks all played it. Does this cause a deck like White Weenie to gain value? Everyone else lost their ace, but the deck that won the Pro Tour stays intact? Might be something there.

Here are a couple of different kinds of creature decks that we are sure to see:

While this strategy lost both the Punishing Fire combo and Tarmogoyf, it is likely Jund will be one of the most popular decks ... just like it was in Standard.

The Doran deck loses Tarmogoyf, but keeps its greatest advantage ... its mana! In a format where other people are getting actual Forest or Swamp with a Verdant Catacombs, being the one with the Murmuring Bosk gives you a delicious advantage.

Certainly Flagstones of Trokair, Horizon Canopy, and Mana Tithe are non-zero losses, but it seems that one of the most effective decks of the PT lost the least with the rotation.

4 Knight of the Reliquary 2 Gaddock Teeg

The Extended incarnation of Mythic—from the mind of Mowshowitz himself.

You know what this deck lost? One Horizon Canopy. That's right: Tarmogoyf was just too small.