Unusual Choices and the National Championships

Though Caw-Blade showed up multiple times in each National Championship Top 8, they were as a whole much more diverse than certain other Top 8s (say the US National Championship, with six Caw-Blade decks), and there seemed to be a great variation in the choices made even within the contexts of established decks.

Both Top 8s we will look at today (Great Britain and Canada) featured six different decks, with Caw-Blade and Red Deck variants doubling up in each. Let's see how they bore out!


The first thing that jumps out at us in this Top 8 is champion Daniel Royde's Mono-Green Eldrazi Ramp deck. Though we have seen a fair amount of action from Valakut, the Molten Pinnacle since the bannings of Jace, the Mind Sculptor and Stoneforge Mystic, performances by onetime Primeval Titan peer Mono-Green Ramp have been fewer and farther between. 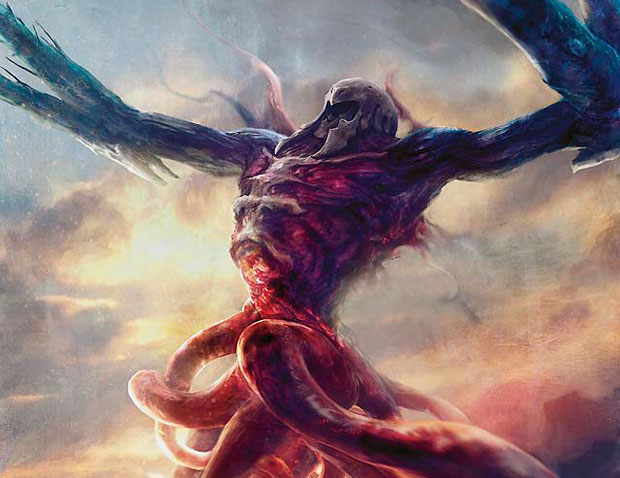 Royde's deck is absolutely chock full of mana: 28 of his 60 cards are lands, and he has a fair number of Joraga Treespeakers and Overgrown Battlements (and to a lesser extent, Green Sun's Zeniths) to boot.

Aside from individual customizations / modifications, Royde's deck functions at a baseline as many of these decks have for the last year or so: Early mana acceleration sets up; Summoning Trap defends against Counterspells.

Primeval Titan—whether hard-cast or a result of a lucky Trap—helps set up the specialty Eldrazi lands (Eldrazi Temple and Eye of Ugin). With Eye of Ugin, a Mono-Green Ramp deck is never truly out of threats. You can always go and get Ulamog, the Infinite Gyre or, in a pinch, the "humble" Spellskite.

But as we've already said, there are a fair number of customizations going on in this deck that make it an atypical Eldrazi Ramp...


Eduardo's Caw-Blade is more conventional relative to the current card pool. Phantasmal Image is finding quite a bit of adoption in Caw-Blade lists, doing everything from copying the opponent's Squadron Hawk to pulling Caw-Blade players out of mana screw by pilfering a Solemn Simulacrum's abilities. 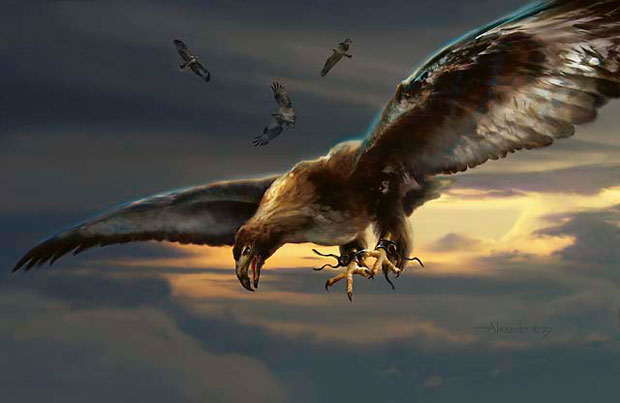 This sort of Caw-Blade has some respect for higher-end threats—Emeria Angel as well as some six-drops—but still runs main-deck Timely Reinforcements as a deterrent to Red Decks from the main. Note the presence of the near-ubiquitous Dismember main, and the continued use of Sword of Feast and Famine as the main-deck Equipment; Sajgalik supplements from the sideboard with a solo Sword of War and Peace.


Hannah goes quite a different direction offensively with main-deck Mirran Crusader... and the full four, at that! Mirran Crusader of course dances past any Overgrown Battlements or even Primeval Titans that might present themselves, and can cause serious chaos in conjunction with any Sword.

Both decks run relatively high land counts (26-27 level), and have adopted Azure Mage tech out of the sideboard.


Both decks are Chandra's Phoenix variants. That means that they run a bit burn heavy relative to certain other red builds in order to have a higher chance of buying back a lost Chandra's Phoenix. 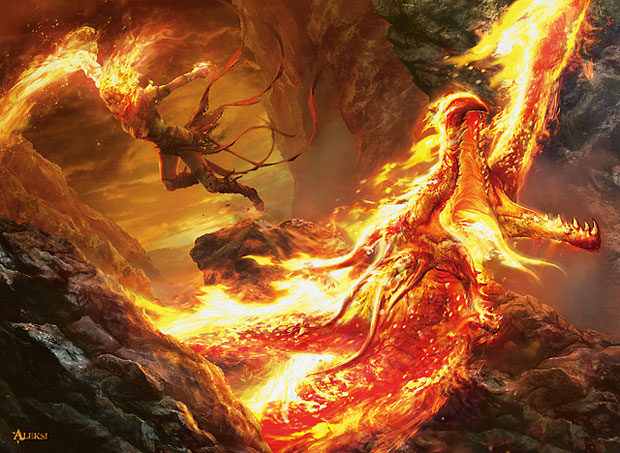 That said, neither deck is all-in on the Chandra's Phoenix plan. Both ran a full eight fetch lands to help fuel Grim Lavamancer, and Penton went a little old school, doubling up the fetch land synergies by bringing back Plated Geopede (and, unrelated but still old-ish school, Kargan Dragonlord). Ember Hauler (as played by Harborne) has been the default Red Deck two-drop of choice since about March.

Both decks went with the full four copies of Shrine of Burning Rage—maybe the scariest Red Deck card in Standard—and gave a nod to Hero of Oxid Ridge, the consensus best solution to a world where white is defined by its ability to run Timely Reinforcements. 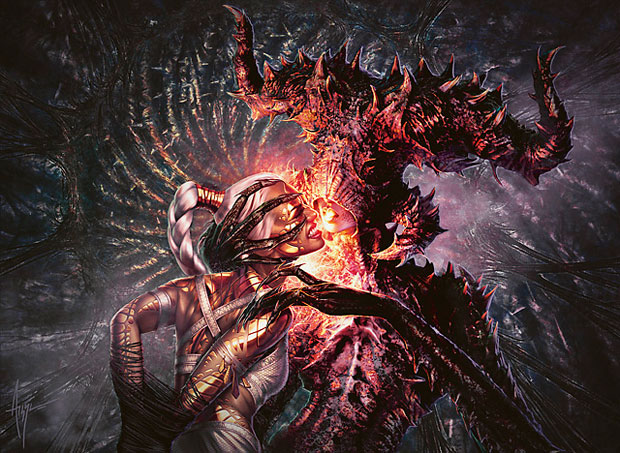 In the vein of "cutting four-mana artifact creatures" we also don't see any Peace Strider support out of Blake's 'board.


William played arguably the most unique deck in either Top 8, a green-blue "good stuff" aggro-control deck combining. William's deck is basically good spells and better creatures, featuring mana acceleration and much the same Equipment advantage we see Caw-Blade trying to maintain, but also strange nuts like second-turn Beast Within... your land. 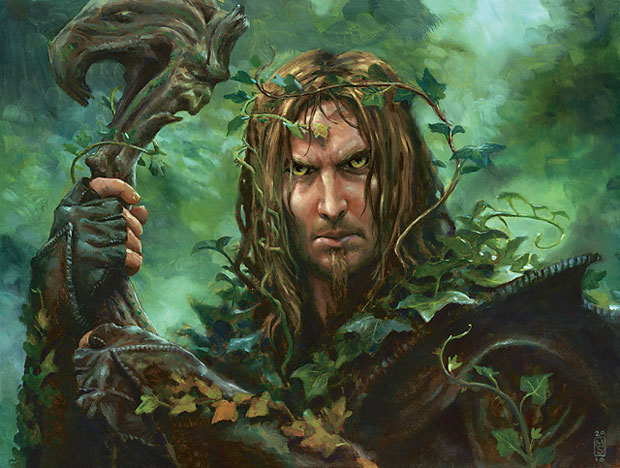 Skinshifter is a card that has been getting rave reviews from Hall of Famer Brian Kibler, and we see that in the Dunn deck; note that Skinshifter is a superb blocker even against Red, because you can always get the block in before going 0/8, even if the opponent has the burn spell. Skinshifter in Rhino mode has trample, making it a fine Swordsman, and Bird mode is actually bigger than a Squadron Hawk.

Garruk, Primal Hunter helps to make up for the fact that William's deck plays only 14 creatures; Garruk actually gains loyalty while spitting out Beasts.


The main innovation in this deck is the inclusion of Nantuko Shade—onetime Cadillac Black two-drop—in both main and side. Tim played Dark Tutelage main in order to help get ahead, his only red card in the starting 60 being Lightning Bolt.

Across the Atlantic, the Canada National Championship showed us a Top 8 that looked like this: 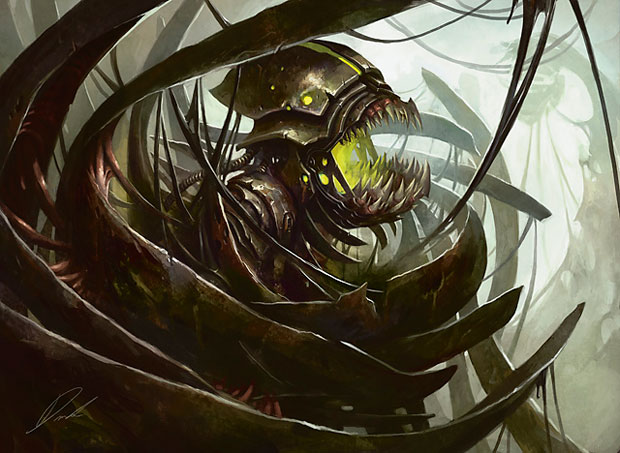 The advantage of this build relative to most other decks in the field (let alone other Birthing Pod decks) is the presence of a turn-three infinite kill (turn one Birds of Paradise, turn two Deceiver Exarch, turn three Splinter Twin the Deceiver Exarch, make lots of 1/4s, etc.); the downside relative to some other blue-red-green lists (notably, the one advocated by Patrick Chapin and Michael Jacob) is that Twin Pod offers a generally inferior Birthing Pod strategy.

As you can see, Marc only has one copy of most of his creature cards: one Acidic Slime, one Frost Titan at six, one Sea Gate Oracle, and so on. This is because he is taking up eight of his deck slots with combo pieces. So on the one hand, he can just come out and kill the opponent with a super sick two-card combination, but on the other hand, he doesn't have the elegant Hero of Oxid Ridge out-of-nowhere alpha strike kills, or the ability to lean on multiple Inferno Titans in a creature mirror. 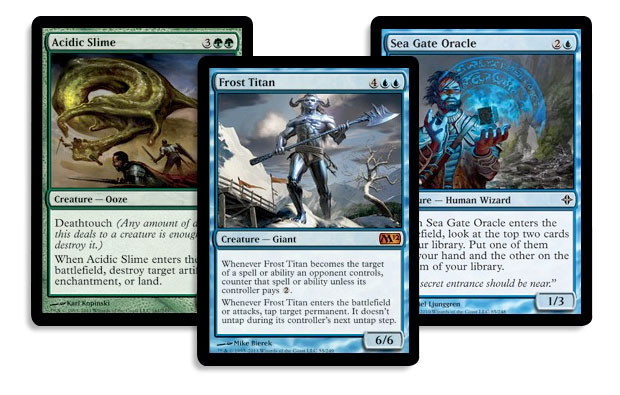 Both strategies have their incentives—and the Exarch Twin combination is a big one!—so I think it is fair to say that neither blue-red-green Pod build is objectively superior to the other.


Marcel played a conventional Caw-Blade deck very similar to the one that Eduardo Sajgalik fielded in Great Britain at the same time, with an identical creature set, nearly identical 27 lands, and very similar remaining 24 cards.

That said, Marcel's sideboard was a bit different, with no respect for Splinter Twin—neither Torpor Orb nor Spellskite anywhere—but a second Azure Mage.

4 Hero of Bladehold 2 Day of Judgment


By contrast, Mani Davoudi played a fairly different Caw-Blade variant (while still falling under the macro umbrella of Caw-Blade). Mani ran main-deck Azure Mage as a powerful aggro-control card (solid threat against combo and control, but cheap enough that it will typically resolve), and Hero of Bladehold as a four-of in the creature suite. Hero of Bladehold has been likened to the "seventh" Titan—albeit a Titan that costs only four mana—for the power of its token-generating ability. A fine Sword-bearer with 4 toughness, Hero of Bladehold can end games quickly for Caw-Blade, rather than relegating its master into a long, drawn-out battle of sometimes-enhanced 1/1 creatures.