"Welcome to the Grid." 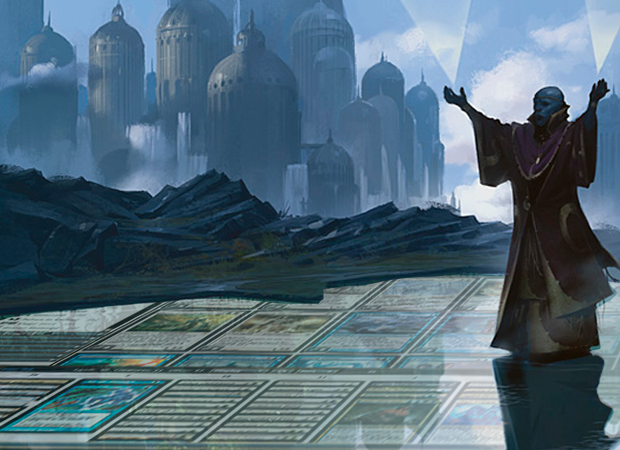 arkening to Disney's Tron might be a bit overzealous, but jumping into the world of Magic Online really is like entering another plane of reality. In the real—paper—world I use a subset of cards to help me build Commander decks. Finding cards I don't have set aside is a combination of treasure hunting and frequent disappointment. Building someone else's Commander deck results in some loss of hair as I pull it out trying to grapple with fifty or more unique cards.

But it's different online.

With the flick of the keyboard I can find any card I own. I can simply run a mini Gatherer-esque search within everything I own in a matter of seconds. Building decks lets me save them for later without keeping any physical space or cards reserved; one copy is enough for every Commander deck I could want. Taking another's deck for a spin is as simple as importing the list; saving my own version is just as easy, too.

I don't always play Commander online, but when I do, I truly appreciate some of the benefits of digital gaming.

I'm pretty simple when it comes to Commander—give me a deck and I'm set to go. When I wanted to get a few games in over the holidays a few months ago, Magic Online had all of the preconstructed Commander (2013 Edition) decks ready to go. It was my first chance to try out Derevi, Empyrial Tactician, and it's a deck packed with useful things for the format:

Derevi is a powerful commander we've talked about before and one I keep coming back to. This deck is like the others in the Commander (2013 Edition) series, but I found the selection of tools in this one supremely helpful for rebuilding one of the favorite decks: Rhys the Redeemed.

It's been more than three years since I picked up the white and green of Rhys the Redeemed. Filling out an updated deck with Rampant Growth-like spells and some clever tools like Thousand-Year Elixir had me worried, but fortunately I already had most of it from the last time I had the deck online.

Even better, I didn't have to worry about finding and carrying around tokens and dice. Cathars' Crusade in combination Rhys (and any number of other ways to put multiple creatures onto the battlefield at once) requires a daunting number of accessories when I play in person. While I typically have enough on hand, there isn't an easy button to push to make it all happen quickly.

I love it when everything falls into place online.

There are downsides too, so don't take me the wrong way. No way to play is perfect, and one of my new favorite ways to play Magic is drafting Conspiracy.

While I'll have to settle for playing in person when I want to get my multiplayer draft on, Vintage Masters will bring some of the awesome legendary creatures and cards from the set online. I'm already hard at work on making Muzzio, Visionary Architect as a new deck, but Archie nailed it for Marchesa, the Black Rose:

As someone who is only able to play on Magic Online, some of the reprints in Vintage Masters are going to really help fill some nagging holes in some of my decks. Where to start on this one? I want Beetleback Chief for my Purphoros deck; Norwood Priestess for my Xenagos; while Brago, King Eternal fits perfectly into my Ephara deck. However, the card I am most excited to play and build around is Marchesa, the Black Rose. Dethrone has really cool political implications, while Marchesa's other ability has amazing synergy with a number of cards and abilities.

The coolest card in the deck is Unspeakable Symbol. Symbol is amazing in this deck as it pulls the double duty of keeping your life total low enough to activate dethrone and allowing you to keep your creatures around. Another cool addition are the M13 Rings of Xathrid, Valkas, and Evos Isle, which can be used to protect Marchesa as well as give counters to my creatures.

Many members of the Vampire tribe make it into this list, with notable standouts in Mephidross Vampire and Necropolis Regent. Marchesa's ability also allows me to rebuy the monstrous abilities on Stormbreath Dragon and Hythonia the Cruel. Plus, repeatedly throwing an unleashed Hellhole Flailer at my opponents' faces seems like a good idea! Marchesa has some cool synergies with a couple of other legendary creatures as well; Exava, Rakdos Blood Witch can give my creatures haste, while Grimgrin, Corpse-Born provides a repeatable sacrifice outlet.

All in all, I am very much looking forward to getting hold of Marchesa, as she seems like a commander who can give a deck a huge amount of synergy as well as playing on the political aspect of dethrone.

1 Blade of the Bloodchief 1 Skullclamp

I had toyed with the idea of an Exava, Rakdos Blood Witch Commander deck, but Marchesa takes it to a whole new level. I didn't even know Unspeakable Symbol was a card until Archie put it on display here.

But she isn't the only legendary creature to come online with Vintage Masters: All of the new options in Conspiracy are up for grabs. 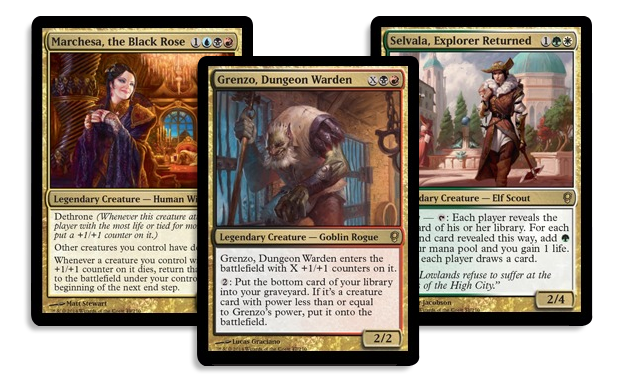 That leads me to this week's question: Which new legendary creature featured in Conspiracy or Vintage Masters are you planning to create a deck around?

New commanders are always fun to try out. Join us next week when we compare notes on Muzzio and more. See you then!