In the Wake of the Gods

elcome back to Perilous Research, DailyMTG's exclusive Magic Online column. Last week, I had the opportunity to travel across the Atlantic to compete in Pro Tour Theros. I practiced hard and played my best. Going into the second to last round of Swiss, I found myself playing for Top 8. Unfortunately, I lost in Game 3 and got paired against Patrick Chapin in the last round and found myself unable to draw into the Top 16 as I had expected to. It's tough to go from playing for Top 8 to coming in 29th, but I'm proud that I was able to make it as far as I did and if a few draw steps had gone slightly differently I might be writing a victory column right now.

Since Pro Tour Theros, Magic Online's Standard metagame has quickly evolved. The Blue Devotion deck has quickly gained a lot of traction and the Supreme Verdict strategies that punish the Blue deck are on the upswing. Today, we'll be taking a look at the major archetypes we can expect to see in Magic Online Standard events going forward. 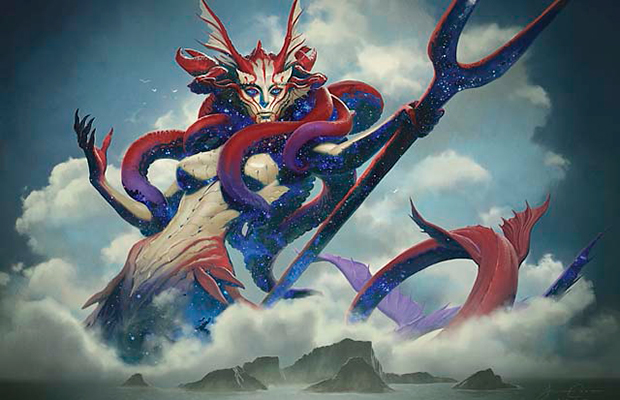 Thassa, God of the Sea | Art by Jason Chan

In the wake of Mono-Blue Devotion's massive success we can expect decks with a lot of spot removal or Supreme Verdict to be especially well positioned going forward. The Blue deck is very strong against other aggressive and midrange strategies, but it's weak to decks that can control its devotion. Let's take a look at the most successful decks from Magic Online since Pro Tour Theros:

Red decks will be a force to be reckoned with for the remainder of Theros Standard. It's difficult to have a strong matchup against these decks without making yourself weak to Sphinx's Revelation or the devotion strategies. The deck applies a lot of early pressure with its two-drops and closes the game with Fanatic of Mogis and burn spells. Master of Waves is a huge issue for the Mono-Red deck, but it's entirely possible for the Red player to be more aggressive in the earliest turns, especially when the Blue player doesn't draw Frostburn Weird. The Blue deck won't be able to trade off creatures aggressively in the early turns without neutering its devotion count.

Esper Control was the most popular archetype at Pro Tour Theros, but it still only accounted for roughly 11% of the field. The deck, like all Supreme Verdict strategies, is strong against the Devotion strategies, and we can expect this deck to have a resurgence of popularity in the coming weeks. The deck has trouble with Burning Earth and black midrange strategies that play a lot of Thoughtseize and Abrupt Decay alongside hard-to-deal-with threats, but its overall game plan means it's able to overpower most opponents if it can consistently hit land drops. We can expect Esper Control and its more consistent cousin, Azorius Control, to be huge parts of the Standard metagame going forward.

4 Master of Waves 1 Bident of Thassa 3 Jace, Architect of Thought

The Blue Devotion deck was the breakout archetype from Pro Tour Theros. The deck was incredibly well positioned against non–Supreme Verdict decks and, as a result, it had tremendous success at the game's highest level. Joel Larsson designed a similar version of the deck on his own that splashed black for Thoughtseize and Doom Blade. I expect Mono-blue to remain a huge part of Standard going forward, but I also expect players to start splashing black because of the added power gained in the mirror. Also, the ability to Thoughtseize a Supreme Verdict out of the opponent's hand massively increases the deck's resilience in a metagame that won't be caught off guard by a previously unknown entity.

Here's an interesting one. White-Black-Red Midrange strategies were tested and abandoned by most teams at the Pro Tour. The deck is halfway strong against control and halfway strong against aggro. This means that the pilot can find him- or herself drawing the wrong half of the deck against midrange or control decks and it makes the deck hard to play in a long game against either of these strategies. That being said, the main-deck Blood Baron of Vizkopa is going to be huge against Junk midrange strategies and the entire deck is strong against the devotion strategies. We can expect this deck to have continued success as long as the format remains devotion-based, but the deck will significantly wane in power if decks like Esper, Red-Green, and Naya start to climb back on top of Standard.

Another breakout strategy from Pro Tour Theros is the Mono-Black Devotion deck. This deck does well against midrange and aggressive strategies, including the other devotion decks. In fact, this is the deck I plan on playing with most in the upcoming Standard events. Against control decks the strategy hinges on Whip of Erebos and Underworld Connections as follow-ups to Thoughtseize; that may seem narrow, but I believe it's enough to put up a fight in Game 1 before we're able to bring in Duress for the second and perhaps third game. Lifebane Zombie is the best card against the White-Black or Junk midrange strategies and the heavy removal package here should be enough to lean on the Red-Green and Naya Midrange decks.

Selesnya populate decks were overshadowed by the more aggressive Green-White decks that performed well in the run up to Pro Tour Theros. Those decks were weak to the devotion strategies and, as a result, they suffered poor results at the Pro Tour. Decks like this one may seem weak to the devotion decks and even weaker against Sphinx's Revelation strategies, but I believe cards like Druid's Deliverance could be enough to swing the Red Devotion, Green Devotion, and Blue Devotion matchups into this deck's favor.

There's a world of possibilities for the new Standard with Pro Tour Theros in the books. In the coming weeks, we'll begin to see Standard evolve and take shape as players find the right combination of cards for specific matchups. There's still a lot of room for brewing and the format seems ripe for someone to come in and break it wide open with some unknown entity. Stay tuned to next week's article, where we'll continue to watch the evolution of the new Standard metagame.