A not-exhaustive look at two formats.

Here at Top Decks, we spend a lot of time talking about the Standard format. Heck, last week we talked about circa sixteen Standard formats (or at least some of their bad guys and bogeymen)!

In light of this weekend's upcoming World Magic Cup—which in addition to Standard embraces the formats of Modern and Innistrad-Avacyn Restored Block Constructed—I thought we'd touch on some of those other formats for a little World Magic Cup sneak preview action. 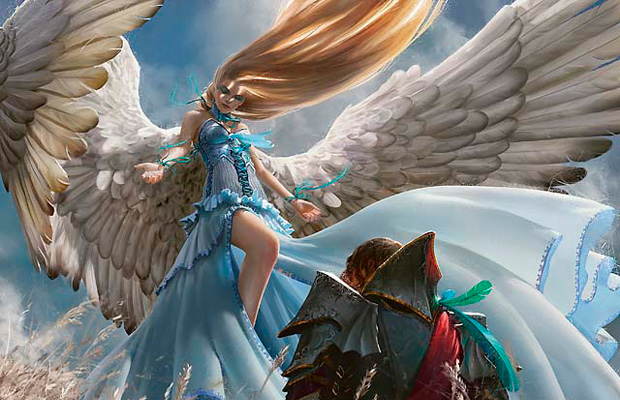 Modern was the showcase event at Pro Tour Philadelphia less than one year ago... when Samuele Estratti (not coincidentally the "Top Pro" of this year's Italian World Magic Cup team) defined the format with his Exarch Twin deck:


Modern was—and is—a big idea and a reasonably big format; broader than Extended, but pruned ahead of time to defend the fun factor. No Jace, the Mind Sculptor; no Stoneforge Mystic. Well, Estratti's Exarch Twin, too, has been similarly de-toothed since the Philadelphia win. Now gone are his one-drop consistency-makers, Ponder and Preordain... setting up Pestermite + Kiki-Jiki, Mirror Breaker or Deceiver Exarch + Splinter Twin (either combo would give Estratti an engine for essentially limitless power by untapping either a Splinter Twin-wearing blue guy or the machine gun legendary Goblin) has become a little less effortless.

Much of what was great about that inaugural Modern champion remains; for example, in this 4–0 deck from one of last week's Magic Online Daily events:


The Modern hybrid Birthing Pod strategy is unambiguously potent; playing against it is reminiscent of fighting LSV-era full-on Elves Combo with Glimpse of Nature. The deck is a creature deck. It can go Noble Hierarch into second-turn Kitchen Finks and beat you up (certainly, other builds actually have the full four Kitchen Finks).

Or it can go Birds of Paradise into Birthing Pod and then chain up... Wall of Omens (draw a card), Kitchen Finks (leave a body), Restoration Angel (reset, etc.).

...but like Estratti's deck, this one can win (typically wins?) on an unlimited combo. Four copies of Kiki-Jiki, Mirror Breaker; four copies of Restoration Angel; a Deceiver Exarch for good measure. You can aim Kiki-Jiki at Restoration Angel, blink the Legendary Goblin, do it again... over and over... literally ad infinitum. Send as many 3/4 creatures as you like.

To say that Modern is a "diverse" format might be a bit of an understatement. It has the twin assets of being huge and not-particularly-developed (no StarCityGames Open Series grinding it to crystal distillation, weekly and on camera). In addition to two-card infinite combo decks and the Birthing Pod/creature-based take on the same, it is a format full of Blue-Red Urzatron decks, White-Blue Urzatron decks, Red-Green Urzatron decks... and regular-old "good stuff" decks.


This All-American beatdown deck in Modern is basically a Standard Delver deck... but with awesome burn spells like Lightning Bolt and Lightning Helix! This deck is the—ahem—"modern" realization of the "critical mass of great beatdown creatures" and "critical mass of great burn spells" we have seen in select formats passed. Delver of Secrets is an all-star in Legacy as well as Standard, so acquits itself swimmingly in Modern. Joined at the one by high-reward fast attacker Steppe Lynx, this deck can hammer an opponent with Geist of Saint Traft. It can also circumvent the red zone with its high-value red spells Lightning Helix and Lightning Bolt... and do it all over again with Snapcaster Mage.


The above is a finals deck from this past May, and might be of particular interest as Siow is one of the World Magic Cup participants (for Canada). This deck in particular is a different take on the red-white-blue concept, with Tarmogoyf as the undercosted heavy-hitter, and a bit of a more mana-intensive mid- and late-game.

Lucas played with recurring threat-answer Vedalken Shackles (not particularly mana intensive, but requiring a fair number of Islands in play to do much going long) and Cryptic Command (which costs four mana).

Both Lucas's Delver deck and the All-American beatdown play cards like Serum Visions where Standard aficionados might expect a Ponder... not just to help dig for lands early (and regulate draws overall)... but to help flip up Insectile Aberration where a moment ago we had the regular old Delver of Secrets. These decks explode in three different directions on a Modern battlefield: They can play the aggressor, close like burn decks (or push supposed blockers out of the way), or slow down/disrupt/out-race combo decks with their light suite of counterspells.

Lucas "only" finished second at the Columbus Modern GP, falling in the finals to Jacob Maynard and his Affinity deck:


You might have noticed that there isn't a whole lot of "affinity" in this Affinity deck—no Thoughtcast; no Frogmite even. The Modern Affinity deck is actually more of a Standard Tempered Steel deck sans the Tempered Steel itself; instead borrowing against the haymakers and finishers from the original Mirrodin Block.

Arcbound Ravager can lend its artifact-impact to any artifact attacker, dodging hate, removal spells, and even blocks.

Cranial Plating does the same (especially when combined with an evasive creature)... but does not require the Ravager's explosive commitment to finality. Cranial Plating + Inkmoth Nexus is actually just game in two swings.

Remember the big Galvanic Blast finish, when Brian Kibler surprised Jon Finkel with multiple shots for four? Part of the surprise was that a "regular" deck with just Sphere of the Suns and Inkmoth Nexus (conditional) don't really make for predictable metalcraft burn... but Modern Affinity basically always has metalcraft. The "Blast Brothers" always hit for 4–5, meaning you don't need to deal that much damage before you pull the opponent into range.

As I said in the subhead, this article makes no attempt at being an exhaustive rundown of every Modern (or Innistrad-Avacyn Restored) decklist, rather a peek at some of the decks that have been successful recently or in defining fashion (especially when played by a World Magic Cup participant). Modern is home to a lot of different decks! We could spend all day talking about turn-three Karn Liberated or the many flavors of Blue-Red Combo... but we probably couldn't hit every viable archetype even if we tried. I figure now is as good a time as any to move to the other format...

Innistrad-Avacyn Restored Block Constructed is kind of the opposite of Modern. The anti-Modern. Rather than a huge format of many different archetypes, it is confined to just three sets—Innistrad, Dark Ascension, and Avacyn Restored—and is therefore necessarily constrained to a smaller number of available cards and strategies. And yet...


Alexander Hayne's win at Pro Tour Avacyn Restored was nothing less than miraculous. Literally! His White-Blue Miracles deck did everything the miracle mechanic is supposed to: It gave him reason to play these big and splashy effects and made the draw step absolutely edge-of-your-seat exciting.

Hayne's one main deck Dissipate was on the high end of permission in the format Game 1s. His miracles appeared, then happened. Here's an undercosted Wrath of God. Here's 24-or-so power in fliers. Deal with it.


He's got Rolling Temblor and Pillar of Flame non-miracle answers to defend himself early on (before his miracles took over) and Bonfire of the Damned as an additional miracle bomb.

Both Think Twice and Thought Scour offer opportunities to draw a card on the opponent's turn, setting up more miracles opportunities. At least in Hayne's build, Thought Scour can be used in combination with Snapcaster Mage to set up and re-buy key spells. Remember: You don't have to Thought Scour yourself! You can Thought Scour the opponent if you think your top cards are so valuable... or if the opponent gives you reason to do other (say he or she reveals a game-breaking Bonfire of the Damned with a Delver of Secrets on upkeep), you can go ahead and ruin that plan.

While miracles might be the most dramatic thing possible in Block, it is actually just one part of a surprising universe of possibilities. In addition to this mighty control, Innistrad-Avacyn Restored Block Constructed boasts both combo and beatdown possibilities.

The Invisible Stalker deck is less a legitimate creature deck than some other Block options (and lacks the topdeck possibility of Bonfire of the Damned), constricting its options to just moving forward; but there is no question that the opponent is put on a clock.

The intuitive two- and three-color beatdown decks are all present and viable attack options in Innistrad-Avacyn Restored Block. They tend to have similar strategies (efficient creatures opening up the attack, finishing on red cards).


Pro Tour Champion Paul Rietzl's Boros beatdown deck has some of the hardest-working Cavern of Souls in all of Dominaria. First-turn Champion of the Parish or... first-turn Stromkirk Noble! Gather the Townsfolk can give Champion of the Parish some of its most aggressive second turns... while either Hellrider or Rally the Peasants makes Midnight Haunting, Gather the Townsfolk, or whatever else is attacking en masse fast and deadly.


Dawntreader Elk is the gem of this strategy; it is both a superb defensive card and a grand catalyst for Brimstone Volley. Hello morbid!

Again, complete and exhaustive coverage of all available decks and strategies isn't the goal for this one. We have Angel of Glory's Rise decks, the odd Griselbrand, and every which way "re: creature kill." But how many standing Pro Tour champions knocked the format on its ear with an Magic Online stream right before the Grand Prix?

And of these, how many are the Top Pro from the United States?


This is a deck of heavy fists. Borderland Ranger does work, but not as much damage as a hasty Falkenrath Aristocrat or Zealous Conscripts. Conscripts, by the by, doesn't just hit for 3, doesn't just steal the opponent's best creature... it can also steal an ultimate (to be) Planeswalker a turn before it is about to go off.

Kibler's deck has all manner of bombs. In addition to his heavy-fisted creatures, Brian played Garruk Relentless as a small-creature dominator as well as Bonfire of the Damned. Because, hey... when you one-way Wrath of God the opponent, you also want to clear off that pesky life total.

Please take this week's Top Decks in the light it was intended. We pulled decks from several different tournaments (including from somewhat different eras) that will hopefully give you a better feel for some of the decks that will be played in one of the more significant tournaments of the year.

Check out the World Magic Cup this weekend on www.wizards.com/webcast and www.twitch.tv/magicprotour.